HTC U Ultra review: disappointment by a thousand cuts

Share All sharing options for: HTC U Ultra review: disappointment by a thousand cuts

In a season filled with almost endless smartphone hype and announcements, you’d be forgiven if you missed that HTC, once a major player in the Android world, announced and released a new, high-end phone. That phone, the $750 U Ultra, is the company’s current flagship, and the first major device released under its own name since last spring’s HTC 10.

But there’s little about the U Ultra, apart from its screen size (5.7 inches) and price (high), that makes it feel like much of a flagship. The way HTC is selling it — unlocked, through its own online store, and without any carrier involvement — isn't typical for top-tier phones. Even more importantly, the U Ultra doesn't have its own identity, instead recycling a pile of ideas first introduced by other companies. It's a confounding device. At best, it feels like a phone that HTC needed to put out because it had been so long since its last phone was released, but not the real flagship that’s still coming down the road. At its worst, the U Ultra is a mess of bad ideas and even worse execution, as my colleague Vlad Savov highlighted after its announcement in January.

There’s not one single major failing to point to that befalls the U Ultra. Rather, it’s a combination of factors (and not the usual ones that you might expect) that keep it from being a phone I can recommend. It's disappointment by a thousand cuts.

To start with a positive, the U Ultra is an eye-catching, attractive device. Unlike the all-aluminum designs that HTC has used for its high-end phones since 2013, the U Ultra has a new glass-and-metal design, not too different from Samsung’s recent efforts. The glass back slopes and curves into the metal frame in an elegant way, and the sapphire blue color of my review unit is deep and lustrous. It’s a head-turner, for sure.

But there are consequences to using a glass design: it’s a fingerprint magnet; it makes an already unwieldy device slippery and even more difficult to handle; and it increases the potential for damage, as glass is more susceptible to scratching and breaking than aluminum. The U Ultra may be beautiful out of the box, but after a few weeks or months of use, it’s likely to lose its shine. And if you’re hoping that HTC will go back to its aluminum roots after this device, don’t get ahead of yourself: the company told me that the U Ultra represents a "new direction" for its design language and we’re likely to see two or three generations of HTC phones that utilize this glass-heavy design.

In addition to being almost all glass, the U Ultra is a big phone, and that’s due in large part to its two displays: a 5.7-inch, Quad HD LCD for the main screen and a 2-inch secondary ticker above it. The secondary screen, or "Dual Display" as HTC calls it, is designed to show notifications, app or contact shortcuts, weather information, upcoming calendar appointments, and other bits of data while you view other content on the main screen. It also lights up whenever you pick up the U Ultra to display the current time and any recent notifications.

If this sounds familiar, it should, because it’s basically the exact same idea as seen on the LG V10 and V20. It’s also about as redundant and useless as LG’s version. Never once did I find that the Dual Display saved me time or was more convenient to use than the main screen, apart from telling me the time whenever I picked up the phone. Further, it feels unfinished: for example, the clock on the second display doesn’t respect my settings for the main screen, so it displays time in 24-hour mode, even if I set the device to display it with AM / PM indicators.

The Dual Display is a gimmick — a bad one

The Dual Display is a gimmick — a bad one. Some phone gimmicks you can just ignore, but here it has a serious consequence: the U Ultra is a bigger device than it would otherwise need to be to accommodate the second screen. Combined with the rather large bezels above and below the main display, the two screens make this phone a honker. In fact, the U Ultra is the biggest phone I’ve used in recent memory, bigger than even Huawei’s Mate 9, which has an even larger 5.96-inch screen.

HTC typically chooses color-accurate, if not class-leading, displays for its phones, and the U Ultra’s main screen is exactly that. The pixels are dense, the colors are punchy without being searing, and it gets bright enough to see outdoors (unlike last year’s HTC 10). But uncharacteristically, the display on my unit has a distracting light bleed underneath the front-facing camera and along the bottom edge. It’s something I’ve seen other reviewers report as well, so it’s not like my unit is unique, and it’s completely unacceptable for a $750 device.

There are other annoyances with the U Ultra’s design, such as the oddly low placement of the home button and capacitive keys for back and recent apps, plus the pronounced camera bump on the rear. Despite being a premium-priced phone, the U Ultra has no water resistance rating to speak of, so unlike an equally priced iPhone 7 Plus or Galaxy S8, you can’t get this phone wet without worry.

Like the iPhone 7, Moto Z, and a handful of other phones, the U Ultra does away with the traditional 3.5mm headphone jack and relies solely on its USB Type-C port for audio, charging, and data transfer. All of the problems you have read about, imagined, or experienced apply to the U Ultra as well. It’s annoying, limiting, and largely inexplicable. HTC tells me that removing the jack makes it easier to design a curved back that blends into the metal frame, but that logic falls apart when you notice that the USB-C port also disrupts the flow of the glass into the metal. If HTC can design around that, logic dictates that it can also design around a headphone jack.

You might think that all of this hand-wringing is for naught, since you can just buy USB-C headphones and use those instead. But the U Ultra is unique: it won’t support just any USB-C headphones or adapters, you have to use HTC’s own versions. The phone does come with a set of compatible headphones, which feature a system that tunes the audio to your specific ears for better quality. They sound fine, and I did notice an improvement when the tuning was enabled, but the earbuds tend to frequently pop out of my ears, making it hard to maintain the proper seal for good sound quality. They also don’t work with any other device I own or carry, making them just another thing I need to put in my bag when I’m on the go.

Frustratingly, even though the U Ultra costs $750, HTC does not include a 3.5mm headphone adapter with it. If you want to use traditional headphones with your U Ultra or plug it into any other audio system, like say a car, you’ll need to shell out $11.99 for HTC’s branded adapter. The obvious move here, should you decide to buy the U Ultra, is to just use wireless Bluetooth headphones with it, but that brings along its own set of costs and compromises.

Inside the U Ultra’s large frame is a respectable list of components. The device is powered by Qualcomm’s Snapdragon 821 processor, which is technically last year’s chip, but is perfectly fine and performs well. There’s 4GB of RAM and 64GB of storage, and you can expand that with a microSD card. The U Ultra’s 3,000mAh battery appears small on paper — most phones in this size class have larger cells — but I haven’t had any issues with battery life in the few weeks I’ve been testing the phone. It lasts through a full day of use for me and charges up quickly, thanks to its support for Qualcomm’s QuickCharge 3.0 technology.

The U Ultra’s 12-megapixel camera is largely fine as well, and is capable of taking good pictures outdoors and acceptable images in low light. It has optical stabilization, which it tends to rely on too much indoors, using long shutter speeds and making it difficult to take sharp images of moving subjects such as pets or children. HTC’s camera app is simple yet powerful with its various manual controls, though I wish HTC would utilize the second display for camera controls like LG does.

The U Ultra can take lovely photos outside, but indoors or in low light, it uses shutter speeds that are too long to freeze motion.

For selfies, the 16-megapixel front camera features an "UltraPixel" mode, which combines the data from multiple pixels down to one, producing a 4-megapixel image with greater detail in low light. Again, it’s fine and capable of taking perfectly acceptable selfies. If you zoom in close, you will see artifacts from HTC’s noise-reduction algorithms, but zooming in close on my own selfies is nightmare fuel for me, no matter the device in question.

The U Ultra being sold in the US is only compatible with GSM networks, so that means it will work on AT&T, T-Mobile, and their respective MVNOs and subsidiaries. It will not work on CDMA networks, so Verizon, Sprint, and US Cellular are out of the picture.

For software, the U Ultra is running Android 7.0 Nougat with HTC’s Sense interface. The Sense interface has been scaled back and toned down so much that only the most die-hard enthusiasts would be able to tell it apart from Google’s own version of Android, which is generally a good thing. As of this writing (early April 2017), the U Ultra has the January 1st, 2017 security patch, so it’s a little behind where it should be.

HTC’s interface shenanigans may be largely in the past, but it’s using the U Ultra as a platform to launch its own virtual assistant software called Sense Companion. It’s intended to provide suggestions throughout your day, such as how you can improve device performance, when you should leave for your next meeting, clothing suggestions for upcoming weather, or a reminder to bring a battery pack with you on a particularly busy day.

All of that is very familiar and, to be honest, simple stuff, and HTC says it’s being conservative with the Companion’s prompts to avoid annoying users and pushing them to just turn it off. It might be too conservative, however, as apart from the initial alerts explaining what the Companion can do, I haven’t gotten any pings from it in the multiple weeks I’ve been testing the phone. HTC says a number of factors can contribute to when you’ll see a Companion alert, and it may come down to the fact that I just haven’t been using the phone long enough. But my impression of the Sense Companion so far is that it’s mostly forgettable.

"Mostly forgettable" is a good way to sum up the U Ultra in its entirety: it has fine performance and battery life, but that doesn’t make up for its unfinished feel and odd design decisions. It even feels like HTC itself would like everyone to forget about this phone when its next major device arrives.

Maybe HTC’s next phone (which is rumored to just be called the "HTC U") will right some of the U Ultra’s mistakes, but until it arrives, the only HTC-made phone you should consider is the Google Pixel, which doesn’t even have HTC’s name on it.

Our review of HTC U Ultra 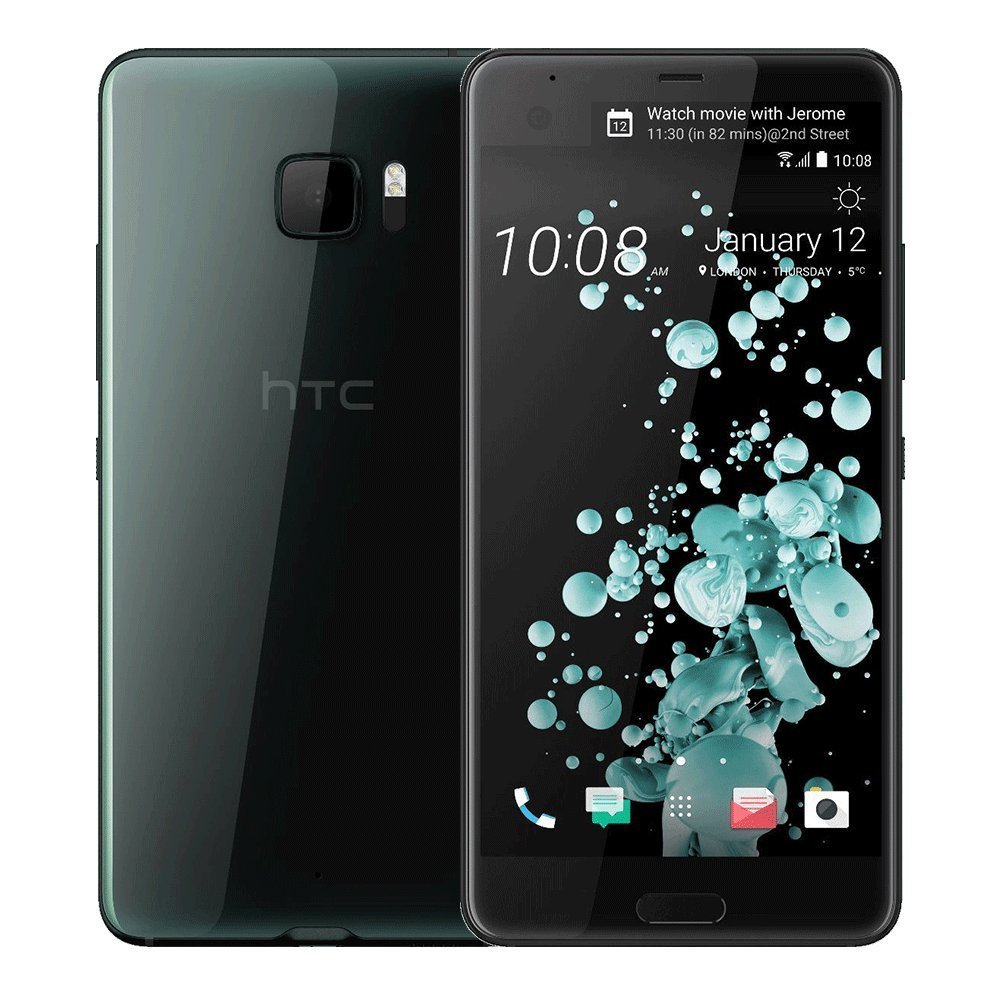