This is such a huge accomplishment for Microsoft when you look back at disastrous launch of the first Surface.

This is also huge win for Microsoft because Tim Cook loves quoting JD Power's customer satisfaction ratings for the ipad at almost every other Keynote. The fact that the Surface has beaten the ipad (despite the launch of the ipad Pro) shows that Microsoft is doing something right 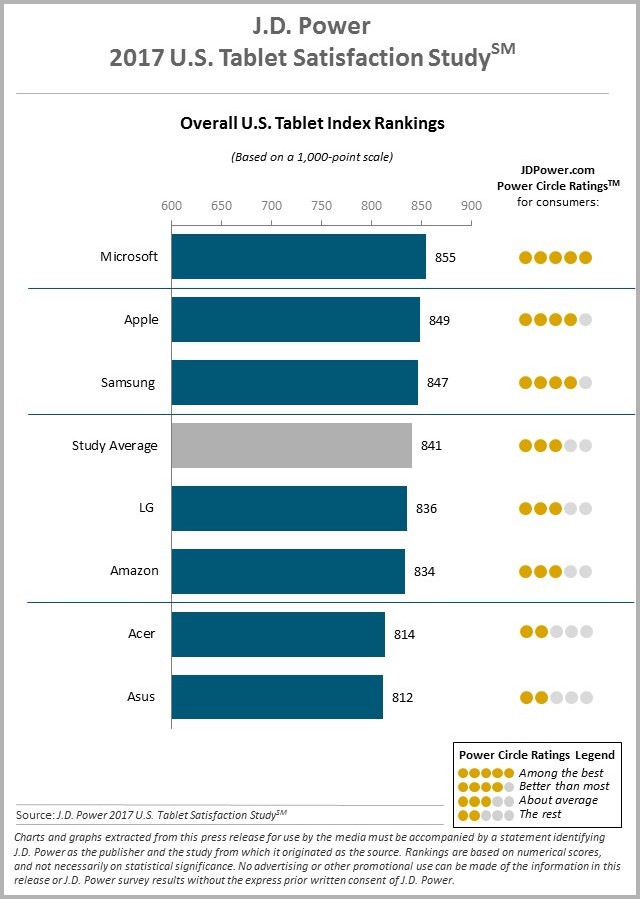 The Microsoft Surface has been ranked the highest in overall consumer satisfaction, and six points above Apple's iPad in second place, according to J.D. Power's 2017 U.S. Tablet Satisfaction Study. This marks the first top spot win for Microsoft in all six years that J.D. Power has published the Tablet Satisfaction Study, with the company earning a total 855 satisfaction score out of a potential 1,000 points. The J.D. Power U.S. Tablet Satisfaction Study measures customer satisfaction in the tablet market by looking at five areas: performance (28 percent); ease of operation (22 percent); features (22 percent); styling and design (17 percent); and cost (11 percent). The study accounts for 2,238 tablet owners who have owned their current device for less than one year, with participants being questioned between October and December 2016. With these rankings, Microsoft has received the designation as "among the best" on the market, while Apple at 849 points is "better than most."

According to J.D. Power, Microsoft's win this year "is largely due to its top rankings in the features and styling & design factors." The company earned top marks in categories related to the variety of pre-loaded applications, internet connectivity, and availability of manufacturer-supported accessories. This last category highlights the Surface's versatility, according to consumers, who reportedly "have the highest incidences of accessory use" with Microsoft Surface when compared to competitors. Specifically, the Microsoft Surface's stylus saw a 48 percent usage rate in comparison to 27 percent of the industry average, while the tablet's add-on keyboard had a 51 percent usage rate in comparison to just a 14 percent industry average. Rounding out the Surface's pros were its variety of input/output ports (like a microSD card slot, USB 3.0, and 3.5mm headphone jack) and amount of internal storage available.

"The Microsoft Surface platform has expanded what tablets can do, and it sets the bar for customer satisfaction," said Jeff Conklin, vice president of service industries at J.D. Power. "These tablet devices are just as capable as many laptops, yet they can still function as standard tablets. This versatility is central to their appeal and success."

Microsoft also beat Apple in areas like the size of the tablet, quality of materials used, and attractiveness of tablet design. Microsoft's customers who are using the Surface Pro line of tablets are said to largely be early adopters (51 percent), younger than the customers of its competitors, and "more likely to consider productivity features as important." Microsoft customers tend to list productivity-related tasks as "very important" in comparison to industry average, like emailing, word processing, and banking.