Corsair One review: a console-like PC in the age of PC-like consoles

Shrinking the gaming PC down to its overpowered essentials

Share All sharing options for: Corsair One review: a console-like PC in the age of PC-like consoles

Over the past couple of months, I’ve been enjoying a rare privilege: a gaming PC that I didn’t have to build myself. In my many years of playing games and tinkering with technology, I’d never previously been exposed to this experience. My first ever PC was such a horribly underpowered and overpriced crate of beige that I swore off buying pre-built machines and started down the custom PC path. Two decades later, one of my favorite PC parts suppliers, Corsair, has decided to take the leap and just sell an entire computer: already assembled, water-cooled, spit-polished, and optimized for the joys of gaming. Like a grown-up gaming console, the Corsair One has a small footprint, quiet performance, and a warranty that expires the moment you open it up to swap parts.

The Corsair One is the gaming rig for those of us tired of or uninterested in being responsible for every little component that goes into their machine. It’s the "it just works" gaming PC, with all the maxed-out specs gamers demand enclosed in a sober exterior that their housemates and loved ones can tolerate. But it doesn’t come cheap, carrying a $1,799.99 starting price. If you want a Corsair One Pro with the latest GeForce GTX 1080 Ti (Nvidia’s fastest graphics card under $1,000) and 960GB of SSD storage, you’d need to splash out a cool $2,599.99. I reviewed the middle child of this unapologetically high-end family, the $2,199.99 Corsair One Pro, and I came away feeling very privileged indeed.

Corsair first made a name for itself by making unimpeachably reliable memory modules, before branching out to creating power supplies, solid state drives, water-cooling systems, and entire cases. Corsair also makes peripherals — selling keyboards, mice, headphones, and light-up RGB mouse pads — but you get no such niceties bundled with the One. The spartan box encasing this computer comes with a power lead, well wishes for the gaming ahead, and a fancy reflective sticker of the Corsair logo.

I’ve never known a Corsair part to fail, and so the promise of having that peace of mind expanded to an entire computer is an enticing one. The two-year warranty is more extensive and thought-out than most, as well, with service centers scattered around the globe to handle any repairs or upgrades you want to have done. Like I say, though, tinkering with the innards yourself will invalidate that warranty — so there’s really no middle ground here, you’re signing up for the full Corsair hand-holding experience with this PC.

Not that I’d encourage anyone to mess around inside the Corsair One. There’s hardly any unused space within this 12-liter tube of powerful hardware. The only way to make an Intel Core i7-7700 CPU and Nvidia GeForce GTX 1080 GPU work together within such tight constraints is fully custom liquid cooling for both — and it’s really far beyond my level of expertise or patience to try and decouple each part and replace it with another. I could, this is still as modular as any other PC, but the magic and the whole reason why this machine exists is in the fact that someone else has done it, and done it better than I ever could have.

It’s worth taking a moment to appreciate just how exceptional the Corsair One’s design is. From the front, it has the appearance of any mid-tower gaming PC, but turn it a few degrees to see its side and it looks like two-thirds of it have just vanished into nothing. It’s not normal for a computer this powerful to be this compact, but Corsair has rotated the graphics card to a vertical position, developed its own extra-small, super-efficient power supply, and crafted something I can put on top of my desk rather than below it. I love the thick aluminum of the One’s case. It’s wonderfully understated, by gaming PC standards, even if it does have a few too many Tron-esque lines and polygonal motifs. The two LEDs at the front can be disabled, and the liquid cooling system relies on just one large fan at the very top of the case, meaning the whole thing works almost silently most of the time.

The 400W power supply did scare me initially, threatening to be inadequate for the One’s top-tier components, however it, too, is of a high quality and efficiency: I ran the One through multiple 10-hour gaming marathons in Mass Effect: Andromeda without it ever showing even a hint of instability. The fan does spin up to a rather loud volume during protracted gaming sessions, however, so I’d recommend having a nice pair of headphones handy. (My current favorite for gaming is the Turtle Beach Elite Pro, or you can opt for the Logitech G533 for latency-free wireless audio.) Speaking with Corsair engineers at CES in January, I found out that the company designed the One’s fan and cooling so that they produce the least irritating noise rather than just the least noise. Sweating that kind of detail is exactly what I expect from a company hoping to sell me a $2,200 PC.

This is obviously not going to be an infinitely expandable overclocking powerhouse, but then it’s also nowhere near the size of one. For me, the Corsair One delivers everything I still need a PC for: the performance to play the latest games at their best, married to spotless reliability and a high degree of convenience. I’m an old-school PC gamer with a new-school intolerance for any delays or requirements for manual intervention.

But Corsair wants to reach beyond its usual audience and beyond its usual destination of gaming boudoirs. This gaming company wants to invade the living room, and it’s got the HDMI-plus-USB output combo for virtual reality headsets literally front and center on the One. You’d be surprised by how few PC cases take this into consideration (and you’d probably be shocked by the almost total absence of proper USB-C or Thunderbolt support, both from case and motherboard makers; the Corsair One has one USB-C port, offering 10Gbps of bandwidth).

This is where the One truly steps into its hybrid role as a console-like PC, however I’m not sure I’m convinced of its credentials. The fan noise really is noticeable without headphones or a loud game masking its presence. Corsair’s idealized scenario of a group of friends all giddily playing VR games would also be a lot more credible if there was a rich selection of stuff to actually play with an Oculus Rift or HTC Vive. But, alas, VR is still waiting for its killer app or game, and until that shows up, the Corsair One’s best shot at the living room is as a very conventional console, albeit one that plays PC games. You can easily hook up a Bluetooth controller to this thing and while away a few hours in NBA 2K17 or whatever else takes your fancy. Just keep it tucked into a quiet corner.

The limited upgrade options might not be a problem, given how much performance Corsair has crammed in

As far as performance goes, the Corsair One Pro ticks all the requisite boxes. It boots faster than I can check my Twitter notifications, and its software is pure and bloatware-free. The only add-ons are actually helpful: a couple of monitoring apps to check on temperatures inside the case, links to install all the popular online game services (Steam, Origin, Battle.net, etc.), and an audio tweaking utility. Playing on a 1080p monitor, I basically couldn’t find a game with settings that would challenge the One. Battlefield 1, Witcher 3, Mass Effect: Andromeda, XCOM 2, Gears of War 4, Overwatch — pick your favorite game and the One will play it superbly well. Even Civilization VI, with performance requirements that can be beguilingly high on later levels with tons of per-turn processing, is better than ever thanks to the fast SSD storage of the One.

Corsair’s stated goal with the One is 60 fps 4K gaming, and though I haven’t got such a high-resolution display to test that claim, I have seen this PC running a maxed-out Battlefield 1 on a gorgeous LG UltraWide monitor with 3440 x 1440 resolution without a problem. So I’ve little doubt that this computer will satisfy the vast majority of people’s needs. The question, though, is how long that will remain the case: without the space or power headroom for another graphics card, you’re basically left hoping that buying the greatest parts today will keep you going for a good few years. Seeing how far current GPUs and CPUs are outperforming the requirements of the latest games, however, I think that’s much more of a viable strategy than it might have been a decade ago. You just don’t need to upgrade PCs anywhere near as often as was once the case.

The Corsair One is a delightful computer. Every little detail about its construction has been thought through, right down to the power button, which has a pivot at the top rather than pressing in completely — an entirely unimportant thing that just happens to be deeply satisfying in practice. So many of the annoyances of a regular PC are just swept away by the One. I don’t have any trouble finding a spot to place it, I never have to worry about it getting choked up with dust, and I don’t need to dedicate half a day to uninstalling bloatware from it. It’s pristine, efficient, and reliable.

But the Corsair One isn’t without its own set of frustrations. I have to not only pay a higher price for Corsair’s integration, but also accept a much narrower set of upgrade options. And this is the conundrum of this PC: it’s designed to be the sort of worry-free all-in-one machine that most people would want, but it costs the sort of money that only extremely enthusiastic gamers would pay. So the class of people who can afford to buy a Corsair One are also the class of people who’d feel most restless about its limitations. My feelings about this PC are not dissimilar to my feelings about the Blue Ella headphones I recently reviewed: it’s great for what it is, but that’s a very peculiar thing that you’ll have to be sure you want before you go spending so much money on.

Our review of Corsair One 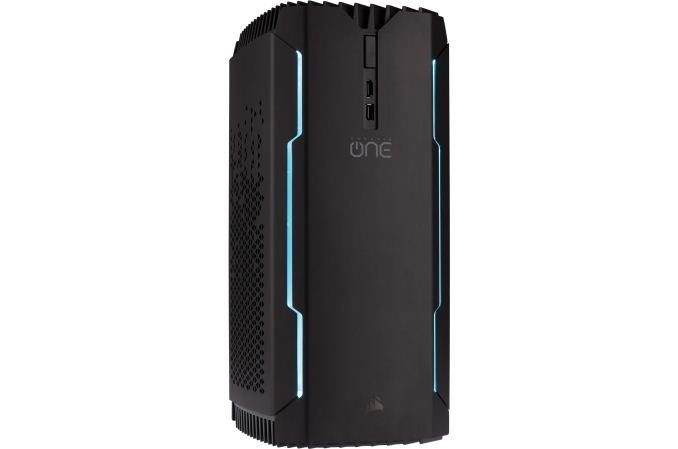