By Chaim Gartenberg@cgartenberg May 22, 2017, 11:15am EDT
Photography by Amelia Holowaty Krales

The first thing you notice about the Acer Predator 21 X is the size.

Whether you’re seeing it for the first time as you take it out of the custom Pelican case it ships in, passing someone struggling to carry it on their way to a meeting, or sitting down to see it at a desk day after day, the sheer bulk of the 21-inch, almost 19-pound laptop will shock you almost every time. It’s a laptop that looks like it has grown strong dining on the blood of other, smaller laptops. The screen by itself is thicker than a MacBook Pro.

Originally announced at IFA 2016, the 21 X was never meant to be a practical or affordable option. It’s the ultimate "what if?" device, a glimpse at what hardware makers can accomplish when things like common sense and logic are thrown out the window.

Weighing in at an impressive 18.76 pounds, the Predator 21 X physically dwarfs pretty much any other laptop ever made. And with an $8,999.99 price tag, weight isn't the only place the 21 X beats out any competitor. Put simply: this is the biggest, most powerful, and most expensive gaming laptop ever made. And yes, it is technically still a laptop, with a built-in screen, keyboard, mouse, and batteries that, at least in theory, allow it to function away from a desk.

This is the biggest, most powerful, and most expensive gaming laptop ever made

Acer has made the most of the enormous size of the 21 X, cramming what feels like every inch of it with some serious firepower. Like the external design, the 21 X's spec sheet feels built for sheer overkill. A Core i7 Skylake Intel processor that’s overclocked up to 4.1 GHz. Two SLI linked GTX 1080 GPUs, with a total of 16GB of dedicated onboard VRAM. USB-C, USB 3.0, an HDMI port, two DisplayPorts, and an SD card slot. 64GB of DDR4 system RAM. Five fans. Five storage slots: three SATA, two PCIe. (Acer ships a single configuration, with one 1TB hard drive and two 500GB SSDs in a RAID configuration.) A Tobii eye-tracking rig, for further immersion. And of course, the show-stopping curved 21-inch screen, which Acer highlights as the first in a laptop (the screen also features a 120Hz refresh rate and NVIDIA’s G-Sync technology). Side by side with any other laptop (gaming or otherwise), it almost feels like the punchline to a joke: "You call that a laptop? No, THIS is a laptop."

While the scale and specs the 21 X may be impressive (as is the engineering to actually build it), Acer hasn't taken any dramatic departures when it comes to the aesthetic design. Between the slew of glowing LED lights, the sharp edges on the plastic case, the giant plastic exhaust vents, and the enormous metallic blue dragon that graces the vast expanse of space above the keyboard, this is a gaming laptop through and through. (As a side note, the blue dragon is one of 20 options for the panel, which is removable to access internal hardware.)

Battery life is a disappointment with the 21 X, even compared to the lowered expectations for gaming laptops. The Predator lasted just an hour and 51 minutes on the Verge Battery Test, which cycles a series of web pages through Google Chrome. Unplugging it for gaming resulted in even poorer results that brought the time to under an hour (exactly how much depends on how hard you’re pushing it) along with a hit to performance to boot. Hypothetically, you can use the Predator unplugged for a few minutes, but it was clearly designed to remain attached to the nearest wall. And the power bricks — yes, there are two of them, each individually massive — are made even more comical when placed together in the custom rubber enclosure that comes with the laptop.

Given that the Predator 21 X is so obviously, single-mindedly focused toward gaming, I figured the only natural thing to do with it was to try and use it as a regular computer for my day-to-day life. Look, I was curious to see how it would work.

In short: The 21 X is simply not very good at regular computer tasks. Breaking that down a bit more, there is, of course, the size, which I’ve already said plenty about. But wrestling through a door while desperately trying not to drop the $9,000 computer I was holding really highlighted for me how absurd it was to even try to use this thing in an office setting.

Additionally, the 21 X features a full mechanical keyboard, complete with standard desktop Cherry MX Brown switches. It is loud, very loud, to the point where the entire pod of co-workers near me had either commented, complained, or possibly plotted my death in a secret Slack room. (I personally find the MX Brown to be a good middle ground for both typing and gaming use, but I can see why the noise would get on people’s nerves. Sorry, Dan / Ashley / Kaitlyn / Lizzie / Michael / Kwame!)

But the keyboard itself is incredibly awkward to use for non-gaming purposes: it’s positioned right up at the front edge of the laptop, instead of farther back. That means that there’s no natural place to rest your palms except for the optional, magnetic palm rest, which becomes yet another thing to carry around. But even with the rest, given the high height that the keyboard actually sits at due to the thickness of the 21 X, I found it to be uncomfortable to use for extended periods of time, which drove me back to my MacBook Pro when I needed to get actual work done.

The same can be said about the screen. On paper, the massive 21-inch curved panel seems like it would be great for productivity. But the resolution is relatively low at 2800 x 1080 pixels — sure, it’s wide, but it comes out to the same vertical resolution of a regular 1080p panel. That said, it was nice to be able to stack tons of windows side by side, even if I had to manually adjust text size smaller to fit a reasonable amount of information.

There’s also the trackpad, which has the neat parlor trick of magnetically detaching and flipping over to turn into a number pad. As Windows computers go, the trackpad is actually really good. Acer has included Windows Precision drivers, so it’s accurate, and the array of swipes and gestures all work well. But the trackpad itself is just too small for navigating so wide a screen even with mouse sensitivity turned up, and I generally preferred to use an external mouse even for regular work.

To be clear, all three of these issues — the keyboard, the screen, and the trackpad — all vanish when it comes to actually gaming. The keyboard, while poorly positioned for typing, is much more comfortable when it comes to mashing the WASD keys while running around in Overwatch. The screen, which resulted in comically sized windows for most websites, gives a wide, almost cinematic experience in Battlefield 1. And the trackpad — well, if you're using the trackpad on the 21 X for gaming, then you're already missing the point of it.

As for performance? You might be able to trip up the 21 X if you do advanced CAD work or heavy video editing, but there's certainly nothing in my workflow that could manage it. Ultimately, using the Predator 21 X for regular work feels a lot like driving a Lamborghini to a supermarket — sure, it'll get you there, but that's not really the point of owning one.

When it comes to the actual act of playing games on the Predator 21 X — its sole raison d'être, — there’s actually surprising little to say. This is a $9,000 computer built solely towards that purpose and function. Of course it runs games well. With the kind of hardware on tap here, it would have been surprising if things didn’t run well.

Still, it was my duty to put the Predator through its paces, and the results were pretty much as expected. But beyond the binary of whether or not games worked well, it’s the experience of gaming on the Predator 21 X that make it stand out. Put practicality aside for a moment, and you’ve got perhaps the single most powerful laptop ever made at your disposal. The curved screen dominates your field of view, and really does lend itself to a more immersive experience (assuming the game you’re playing supports a 21:9 aspect ratio — not all do).

And this thing is just ludicrously, almost needlessly fast. Overwatch — one of my favorite games for comparative testing across gaming PCs, since it works on almost anything — barely dipped below 200 frames per second. Battlefield 1, one of the most graphically intensive games on PC these days, ran smoothly even at Ultra settings. And Rise of the Tomb Raider’s sprawling vistas look incredible, even at maximum resolution. Plus, the 21 X actually runs quietly, all things considered — unless you intentionally set the fans to maximum, in which case the five fans spin up to what is amount to gale force winds.

But while impressive, it’s still the kind of high gaming performance that illustrates exactly why the 21 X is impractical. Does the Predator 21 X run games well? Undoubtedly. But it doesn’t run them $6,000 better than a less powerful desktop, or even a comparable one. Between the sheer bulk of the laptop and chargers, the almost non-existent battery life, and the oversized carrying case you’ll need to move it around anywhere farther than down the hall, the 21 X is barely easier to carry around than a desktop. (In fact, there’s tons of desktop computers that are more portable.) Even if you want to just park the Predator 21 X at a desk and pretend its a desktop computer, you’ll probably want to use a larger external monitor and a separate keyboard, which could be difficult to fit on a single surface. And given that it’s perfectly possible to build a similarly specced desktop PC for roughly half what the Predator 21 X costs, you’re paying a massive premium for what amounts to a laughable idea of mobility.

But that’s sort of the point to the Predator. It’s not practical because it’s not meant to be practical. It’s a trophy for anyone who buys it, a status symbol of having the biggest and best thing out there. Of course it doesn’t fit on a desk or in a bag — because the Predator is meant to stand out, to make people take note.

Despite all the shortcomings in price and practicality, I’m still glad the Predator 21 X exists. While it’s probably as unobtainable as a multi-million dollar supercar at an auto show for the vast majority of consumers, much like a Bugatti or a Ferrari, the technology and engineering that went into making the 21 X can trickle down to the more affordable models in Acer’s Predator line. It’s something that we’re already seeing direct results of with laptops like the upcoming Predator Triton 700, which clearly draws from its larger cousin when it comes to design. And at the end of the day, it’s just cool that someone has managed to stuff this incredible amount of hardware into a single device for to achieve this singular purpose at the highest level possible.

So, yes, the Predator 21 X is overkill. But sometimes, overkill is underrated.

Our review of Acer Predator 21 X 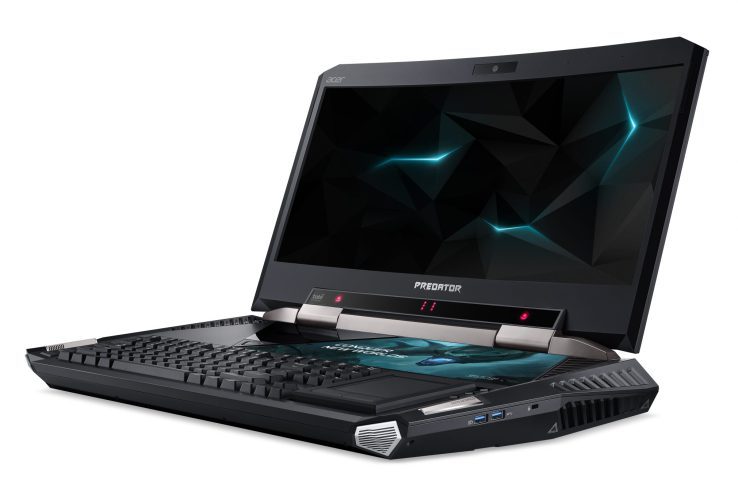