Eero’s latest router ups the game in design, but comes at a cost

A little over a year ago, a startup that no one had ever heard of kicked off a revolution in home networking. Eero introduced the concept of mesh networking to the average consumer and proved that your home Wi-Fi doesn’t have to suck. Since then, Eero’s been joined by many companies in the home mesh networking space, from other startups (Plume, Luma), to incumbents (Linksys, Netgear), to even companies as big as Google and Samsung.

All of these mesh routers basically aim to do the same thing: blanket your home with a strong wireless signal so that all of your devices can always connect to the network without dropping off or losing the signal. They do this by using multiple units, or nodes, that wirelessly connect to each other. They also provide simple setup via smartphone apps and the ability to monitor your network from outside your home.

I’ve been testing the newest version of Eero’s mesh router system for the past couple of weeks in my own multistory home, and much like the first Eero, it does an excellent job at covering my house with a strong wireless signal and allowing me to get the most out of my high-speed internet service. But I’m not convinced that it is a must-have upgrade for existing Eero owners or that it’s the best mesh router you can buy. It really depends on your needs and the layout of your home. Also: your budget.

The new Eero comes in a variety of different configurations. I’ve been using the $399 Home WiFi System, which the company expects to be its most popular option. It consists of a single Eero unit and two of the new Eero Beacons, which are smaller and slightly less powerful. Eero says this setup is designed to cover a two- to four-bedroom home; if you have a smaller one- to two-bedroom home, there is a $299 option that has one Eero and one Beacon. For larger homes, there is the $499 Pro WiFi system that comes with of three full-size Eero units. The company says the Pro package is enough to cover a three- to five-bedroom house, but if you have a particularly large McMansion, you can add more units as necessary to cover it.

In addition to the new hardware options, Eero is also introducing a subscription service called Eero Pro that provides enhanced parental controls and protection against malware that costs $9.99 per month, or $99 per year.

Compared to the other mesh networking options on the market, Eero’s pricing skews toward the high end. You can get a three-unit Google Wifi system for $299, while others, such as Luma and Orbi, fall between the $300 and $400 range. Many other mesh routers offer the same parental controls and malware protection at no extra charge as well.

The new Eero looks virtually identical to the first one: it’s a small, white squircle with two Ethernet ports and a power jack (now USB Type-C instead of the prior barrel connector). The unused USB port from the first generation has been jettisoned, but the small white LED on the front of the device remains. Though it looks the same, Eero says it’s twice as powerful as before. Inside, it’s been upgraded with a third radio in the 5GHz band, which Eero claims makes it twice as powerful as before. Eero is not the first with a tri-radio setup in its mesh system (Netgear’s Orbi and the Linksys Velop both have it), but it is the smallest one with such a configuration.

The new Eero looks identical to the prior model, but the Beacon is half the size

In addition to the third radio band, the new Eero has support for Thread, a relatively new smart home protocol that allows it to connect to and manage devices such as locks, doorbells, motion sensors, and more. However, there are currently zero Thread devices available on the market, so that’s not exactly a big value add or reason to get Eero right now. It’s more of a bet on the future than anything else.

While the main Eero router looks identical to the last model, the new Beacon features a different design. It’s half the size of the main Eero and has an integrated power plug: instead of using a power adapter and cable to plug in the Beacon, you just plug it right into your wall outlet, like a nightlight. It maintains the Thread support, but it lacks the third 5GHz radio of the full-size Eero, so it’s not as powerful. The Beacon also lacks any Ethernet jacks, which presented an issue for me that I’ll get into in a moment.

The Beacon leans into its resemblance to a nightlight by actually being a nightlight. There’s an LED mounted at the bottom of the Beacon that shines whenever the ambient light sensor detects the room is dark enough. It’s not a particularly bright light, but it’s enough to illuminate your path for late-night bathroom breaks or snack runs. You can configure the nightlight to be on all the time, only when the room is dark, or off permanently through the Eero app.

So how does it perform? Based on my experience in my own four-bedroom, 2,500-square-foot home, the new Eero performs just as well as the prior version, blanketing my home with a Wi-Fi signal and allowing me to utilize my 200Mbps cable internet service to its fullest. It is not significantly better in practice than the first Eero, and not much different from my experience with Google Wifi and other mesh systems, but it did let me get slightly faster speeds (think 150Mbps instead of 100Mbps, both of which are more than enough for 4K video streaming) in the far reaches of my home than I was able to with the older Eero.

I typically have 25–30 devices connected to my Wi-Fi network, ranging from phones, to tablets, to set-top boxes, to laptops, to connected lights and other smart home gadgets. The Eero system was able to handle all of these connections without a problem and I didn’t have any issues with dropouts or bandwidth constraints, even when I streamed 4K video to my TV or use Amazon’s new Echo Show for cross-country video calls.

The Eero app for Android and iOS handles all of the setup and configuration of the network (which takes about 15 minutes and is about as easy as can be) and lets you see what devices are connected to the network at any given time. However, you can’t use the app to assign devices to specific Eero nodes, or to prioritize devices at certain times, like other mesh systems allow.

Eero’s CEO Nick Weaver says the system is designed to handle all of the traffic routing and prioritization automatically so I don’t have to worry about that stuff, but I wouldn’t mind the option to give my 4K TV or gaming system priority for a few hours at a time just so I know it’s getting the fastest connection it possibly can. It’s one of those decisions that is clearly aimed at making things “simpler” for most consumers but that means that nerdier customers (like me) won’t have the customization they want. At the very least, I didn’t experience any performance issues in the multiple weeks I’ve been using the Eero, so it’s not as though I really needed to route traffic to one specific node at any point.

The app has the standard features many modern routers offer, including guest network support, family profiles, and basic network management, such as DNS or port forwarding. It’s also where you sign up for Eero’s new subscription service, Eero Plus. Like Thread, I was unable to test this — my review is solely of the new hardware — but other mesh systems provide both of these services free of charge, so I’m not convinced the extra cost is worth it.

With the standard Eero system, the main hub is plugged into your modem and the two Beacons are placed in other parts of the house to extend the network’s coverage. The Beacons are designed to be discreetly placed in hallways, kitchens, or other areas where you don’t want a large device or a cord to trip over. It’s a clever design and definitely solves a real problem: a Beacon plugged into the wall in my master bedroom is much more pleasant than a full-size device that used to take up space on my nightstand.

But the Beacon’s lack of an Ethernet port presented an issue. In my home’s layout, the modem is located in the main living room, where the cable connection enters the house. I typically have a lot of smart home hubs and other devices plugged into a network switch in my home office, which is located a floor below my living room. A second node in my office provides a place to plug all that stuff in. But because the Beacon lacks an Ethernet port, I had to relocate my switch and all of my other hubs (Philips Hue, SmartThings, Sonos, and others) to my living room, which is less than ideal. This may or may not be a problem in your home, depending on where you have your modem located and how much stuff you need to plug into it, but I would have appreciated an Ethernet jack on the Beacon, even if it meant slightly worse aesthetics.

Aside from having to relocate all of my smart home hubs to my living room, my experience with the new Eero has been overwhelmingly pleasant. Most of the time I just didn’t think about my Wi-Fi network, which is exactly how it’s supposed to be. (A reviewer’s note: I did have a problem with my mobile devices thinking I’m in California when in reality I’m in New York, causing problems with weather reports and geolocation services. The issue is due to Eero testing the review units before sending them to me, and they registered their location with the Skyhook database at Eero’s headquarters. I have not been able to successfully correct their location information, but I also don’t think this is an issue customers that buy the product will have.)

If you currently have an Eero system, I don’t think it’s necessary to fully upgrade to the new one. You can add Thread capability or get the benefits of the third radio by simply replacing one of your existing units with a new Eero or Beacon and the rest will work just fine.

For some people, though, the question will be whether they should buy a mesh router at all, if they don’t currently have one. A mesh router is typically an easy, albeit a costly, way to resolve problems with coverage or speed in a Wi-Fi network. While the Eero has a cost premium over similar systems offered by Google and others, its sleeker design and reliable performance might make it worth the added price. 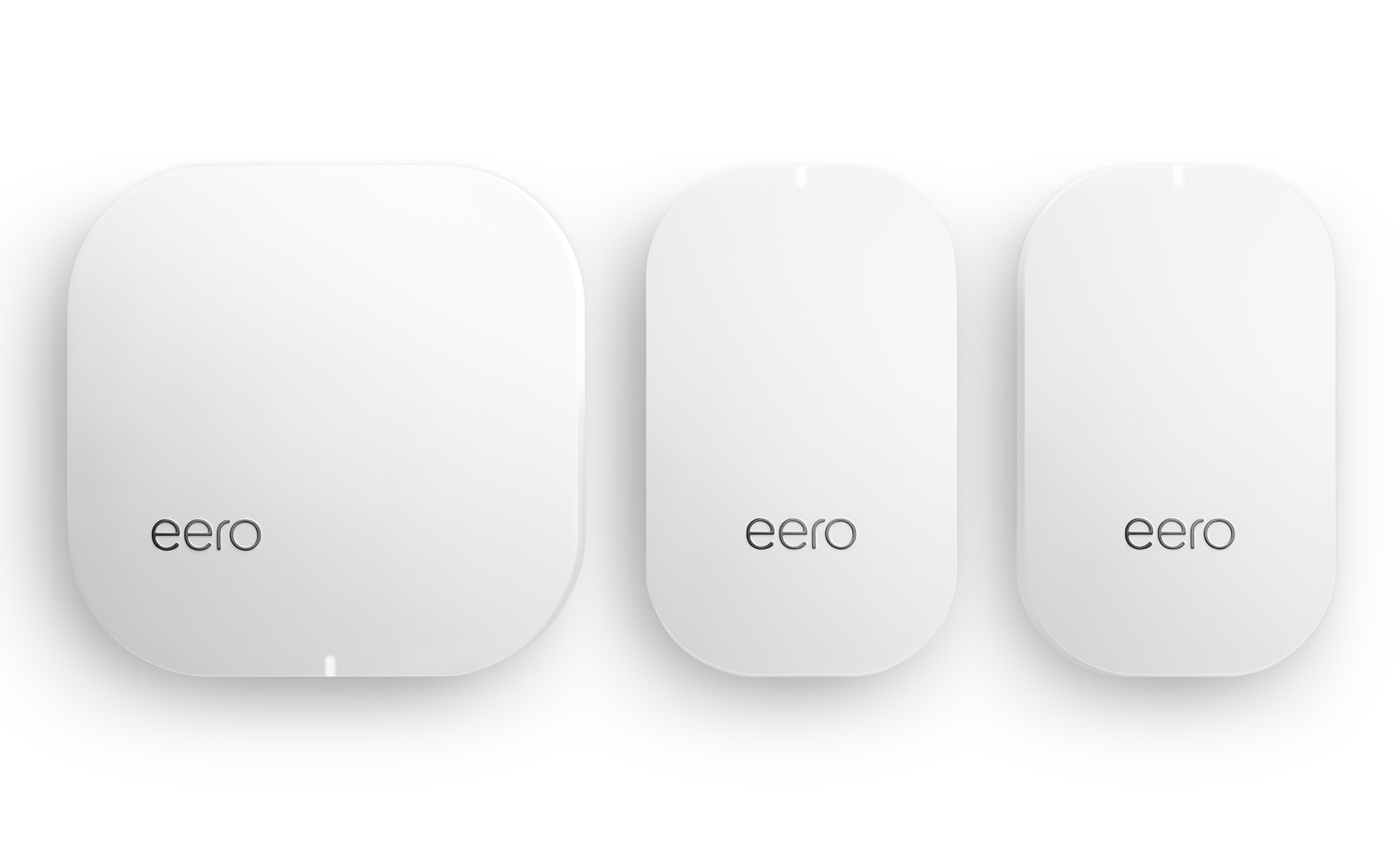