HTC U11 review: feeling the squeeze

Share All sharing options for: HTC U11 review: feeling the squeeze

It seems that every phone to come out recently has had its own gimmick. Some phones have two cameras, some have super tall screens, while others have snap-on modular accessories or extra displays. Not all of these gimmicks are bad – a taller screen provides more pixels in less space and dual-camera setups can produce really interesting images – but they are all ways for phone makers to differentiate their devices when almost every smartphone is basically a flat touchscreen computer.

HTC’s new U11, available today for $649 unlocked from HTC or $696 from Sprint, the only US carrier offering it, certainly has its own unique trick, though it’s not a particularly good one. But the U11’s gimmick, where you’re expected to squeeze the sides of the phone to do various things, is one that you can completely ignore. For the most part, the rest of the phone – the screen, the camera, the performance, the design; you know, the parts you actually care about – is really good and makes it perhaps the best device HTC has made in years.

Before I get to the U11’s squeezing trick, let’s cover the basics. The U11 has a 5.5-inch LCD display with Quad HD resolution (2,560 x 1,440 pixels) that’s sharp and colorful and bright enough to be seen easily outside, which is an improvement over last year’s difficult-to-see HTC 10. It has a 16:9 aspect ratio, so it’s not tall and skinny like the screens on the Galaxy S8 or LG G6, and it doesn’t stretch edge-to-edge like those displays do. It’s not as vibrant as Samsung’s AMOLED panels and doesn’t get as eye-searingly bright either, but it is a very nice display and I have no issues with it. It feels familiar because we’ve been looking at this shape of screen in the palm of our hands for a decade now.

HTC has basically matched Samsung’s expertise with metal and glass

That screen is wrapped in a metal and glass body, which is at the same time the best and perhaps the worst part of the U11. A glass back is a relatively new design direction for HTC – the company started using it this year with the unfortunate U Ultra – but you wouldn’t know that from the way it has been implemented. The curved glass back of the U11 mates to the metal frame with nary a sharp edge and the deep, sapphire blue color of my review unit is a joy to look at. The edges of the front glass over the screen similarly curve down into the frame in an almost seamless manner (though the screen itself is not curved, it is flat). The whole package is wonderfully constructed and premium to a tee. HTC has basically matched Samsung’s expertise with metal and glass designs on its second try, which is no small feat.

The downside to this design is that glass is not nearly as hardy as metal, and can be easily scratched or cracked. On top of that, the U11 is a fingerprint and grease magnet, so that beautiful finish gets spoiled almost as soon as you touch it. HTC includes a very basic snap-on plastic case in the box with the U11, which provides more grip and keeps your fingerprints off the glass, but it gets scratched to hell right away and is a poor compromise. On the upside, HTC has finally made its flagship smartphone water resistant; the U11 has the same IP67 water resistance rating as the iPhone 7.

Like Apple, Motorola, and others, HTC has omitted the 3.5mm headphone jack from the U11. The company’s argument for doing this is that it provides more room for other, more important components and produces a sleeker design, but I don’t agree that this compromise is worth it. The U11 is not a small phone, nor is it thin to the point where a headphone jack simply wouldn’t fit. You probably already know whether or not the lack of a headphone jack will be an issue for you personally, so I won’t belabor the point, but it didn’t take long for me to miss it when I got in my car and didn’t have a way to plug the phone into the aux port.

The U11 does come with a set of earphones that use the USB Type-C port and they sound surprisingly good for buds that come bundled with a phone. HTC uses the Type-C port’s power delivery to tune the earbuds to your ears for a better sound, and it even offers very basic noise cancellation features. These won’t compare to a proper noise cancelling headset from the likes of Bose, but the U11’s headphones are enjoyable to use on a noisy commute. Frustratingly, though, these headphones won’t work with any other device you might own, such as your laptop or tablet.

The U11 also comes with an adapter to use standard headphones with the USB-C port, but that was no help to me in my car when I absent-mindedly left it connected to the headphones I use at home. That’s the trouble with dongles: never there when you need them.

The phone’s own speakers (there are two, one at the bottom edge, the other in the earpiece) are loud and clear and can be tuned for video or music depending on what you’re playing. I found them nice for speakerphone calls.

I’ve been particularly impressed with the U11’s performance; it might be the fastest Android phone I’ve used this side of Google’s own Pixel. Apps open quickly, the interface is very responsive, and scrolling inside of apps is just as fast and fluid as I’d like. It’s been a long time since I’ve used an Android flagship that I would call slow, but the U11’s performance has reset my expectations for what fast can feel like. This could be thanks to the U11’s Snapdragon 835 processor, but it also seems to be in part due to a lot of software tuning from HTC.

I’m less enthused with the U11’s battery life. That’s not to say it’s bad; I’m frequently able to get through a day of medium to heavy use without needing to charge up part way. But it’s not a multi-day marathoner and its stamina just isn’t as impressive as the rest of the phone’s performance. The U11 is the biggest mainstream flagship phone HTC has ever produced (prior models, such as the M9 and HTC 10, had 5 and 5.2-inch screens, respectively), but that increase in size did not bring a notable improvement in battery life.

Fortunately, the U11’s camera is a winner. The 12-megapixel sensor has an f/1.7, optically stabilized lens and dual-pixel autofocus, and it can take lovely photos in many different lighting conditions. It might not win every head-to-head comparison with a Pixel, S8, or iPhone, and it doesn’t have any of the tricks that phones with two cameras provide, but I didn’t really miss any of that. The U11 just focuses quickly and takes pleasing photos with plenty of detail and accurate colors. The 4K video it captures is also smooth and jitter-free, and it can record 3D sound thanks to its four-microphone array.

Out of the box, the U11 is running the latest software from Google – Android 7.1.1 Nougat – and it has some light customizations from HTC. I think the software is great: it’s fast, easy to use, and not too far away from what Google offers on the Pixel. The U11 even supports app icon shortcuts when you press and hold on an app in its standard launcher.

There are not one, but two intelligent assistants on the U11, and soon there will be a third. You already know how Google Assistant works, and you can use “OK Google” any time, even when the screen’s off, to launch it. HTC has its own assistant that tries to give you helpful tips on when to charge your phone, where to go for lunch, and what the weather will be like tomorrow, but most of those are pretty obvious things or already handled by Google’s own Assistant. HTC’s assistant is basically redundant and forgettable. I’m more excited by the forthcoming Amazon Alexa integration, which will allow me to yell “Alexa” at the phone to do things I typically ask an Echo to do — though that won’t be available until later this summer and I wasn’t able to test it.

The U11 is loaded with not one, not two, but three different intelligent assistants

Now here’s the gimmick: the U11 has pressure sensitive areas on its sides that can respond to a one-handed squeeze. The company calls this “Edge Sense” and it can be configured to launch an app, turn on the flashlight, launch Google Assistant, or do other things with either a short or long squeeze.

The idea is that it makes the large U11 slightly easier to use with one hand, but the execution doesn’t live up to that pitch. There are already quicker and more comfortable ways to do many of these tasks and squeezing the sides of the phone never feels normal or intuitive. It’s possible that this might get more interesting in the future – HTC tells me it has broader plans for it down the line – but right now it feels half-baked.

As I said at the beginning, you can completely ignore the very forgettable Edge Sense feature because you don’t need it to do any of the things you want to use a phone for. You can pick up the U11 and enjoy the display, camera, performance, and build quality without ever thinking about squeezing the sides of it.

The U11 is priced right in the premium sector, where companies do differentiate with useful and innovative ideas. It doesn’t have many of the forward-looking features of its competition, but at its base it is a very good smartphone in a very pretty shell. If that’s what you want, and you’re able to get past the lack of a headphone jack and the U11’s attraction to fingerprints, you won’t be disappointed.

Our review of HTC U11 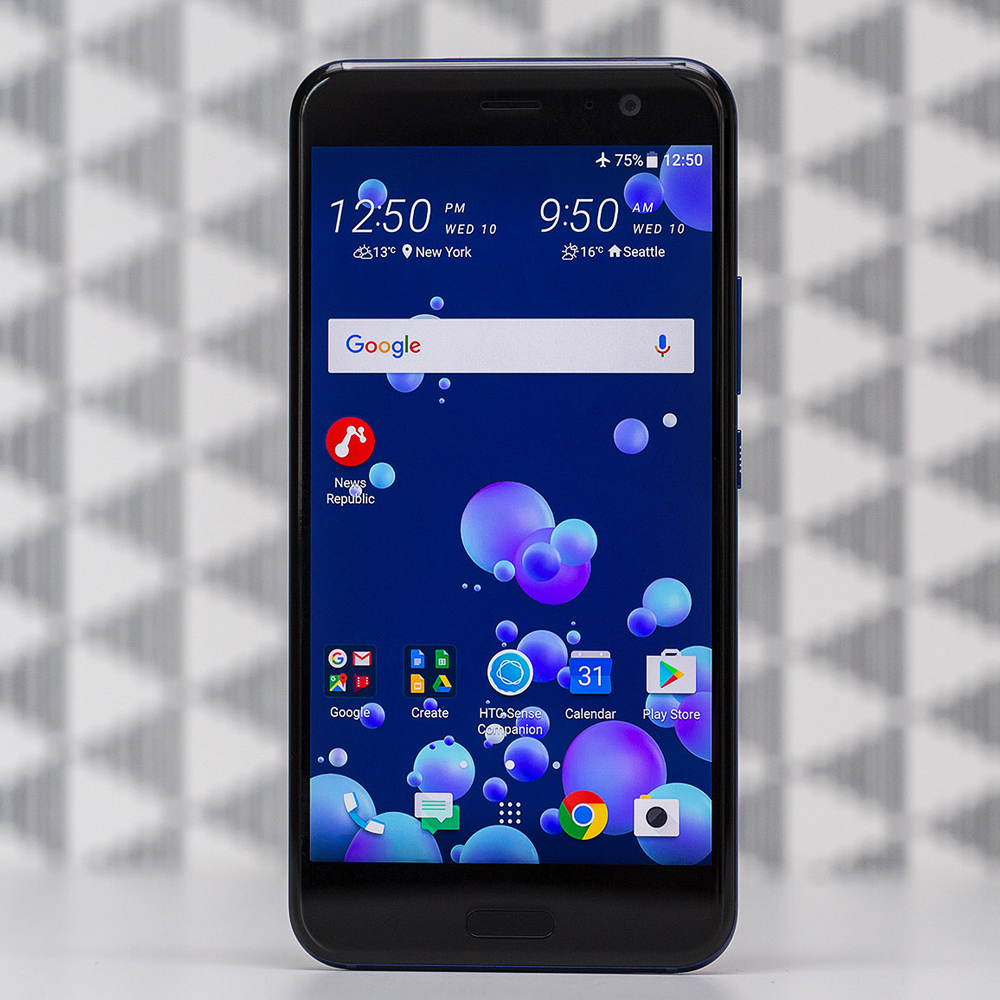