A throwback to the bad old days of Windows laptops

By Vlad Savov@vladsavov Jul 24, 2017, 10:30am EDT
Photography by Amelia Holowaty-Krales

When I first laid eyes on Huawei’s MateBook X, I was smitten. Lust at first sight. This Windows 10 laptop wastes no space around its 13-inch screen and full-width keyboard. It weighs almost nothing, and is barely thick enough to fit a headphone jack. If beauty is defined by efficiency, which I think it is, then the MateBook X is the most beautiful computer I’ve seen this year.

Looks are just one aspect of what makes a good computer, however, and Huawei still has to prove that it can be as good at making laptops as it has shown itself to be with smartphones. To demonstrate its value, the Chinese company has matched a comprehensive spec sheet with an attractive price on the MateBook X. The laptop starts at $1,099 with an Intel Core i5 processor, 256GB of fast storage, 8GB of RAM, a high-resolution display, and Dolby Atmos sound. The Prestige Gold variant I am reviewing today costs $1,299 and upgrades the CPU to a Core i7 and doubles the SSD storage to half a terabyte. Both options are priced competitively and look absolutely stunning.

It’s almost too good to be true.

The exterior of the MateBook X is all sturdy, handsome aluminum. It has a demure matte finish that contrasts nicely with eye-catching chamfers along the edges of the machine and around the touchpad, keyboard, and power button. I doubt everyone will love the extra touch of bling from Huawei — the edge highlights on the MateBook are polished to a mirror finish — but it does give the laptop’s design some intrigue and character. The overall build quality of the MateBook X is worthy of this laptop’s flagship status. It is tough and rigid, the display is very well protected, and I’m especially impressed by the total absence of keyboard flex from such an exceedingly thin device.

Other than its lean looks, the keyboard is probably my favorite thing about the MateBook X. It doesn’t compromise on layout, offering large, well-spaced, and properly arranged plastic-capped keys spanning the full width of the laptop. It also doesn’t shortchange me on key travel, which is positively luxurious compared to Apple’s practically flat butterfly keyboards in the newest generations of MacBook and MacBook Pro. I’d rank Lenovo’s subtly concave keys on the ThinkPad X1 Carbon as my current favorite laptop keyboard, but Huawei isn’t far behind.

The one thing I dislike about the MateBook’s keyboard is its uneven backlight, which fails to illuminate each key in a uniform fashion. The stem of the Y key is darker than the rest of it, the top left of the G isn’t as bright as the bottom right, and the O isn’t a perfect circle of light. For such an otherwise spiffy design, using the MateBook X in the dark feels like I’m typing on an especially filthy keyboard where dirt buildup is blocking the light.

Things go from imperfectly good to almost perfectly bad when you move from the keyboard to the trackpad. The chronic issue of unresponsive and misbehaving Windows touchpads seemed to have abated in recent times (thanks to laptops like the Dell XPS 13 and Microsoft’s Surface devices), but it’s back with a vengeance on the Huawei MateBook X. This is nominally a Windows Precision touchpad, but it behaves nothing like it. Steering the cursor on this computer is like trying to guide a drunk person home. I often have to perform multiple swipes across the extra-wide surface of the pad to get the pointer to move just a few pixels — only to find my next swipe driving it halfway across the screen. It’s unreliable and unpredictable, and therefore deeply unpleasant to use.

On any laptop, I always enable the option to use taps in place of clicks, so maybe that’s the thing the MateBook is getting confused by. My taps, like my swipes, are often left unrecognized by this laptop, aggravating me to the point where I wind up using an external mouse. This shouldn’t be the case. If I was able to tap and swipe with unerring accuracy on a 2010 MacBook Pro, then a 2017 flagship Windows laptop should be able to do the same.

USB-C ports on both sides, but only one of them charges the laptop

Thank the tech gods for inventing wireless mice (I recommend the diminutive Razer Orochi for mobile use), because the MateBook X is as scant on connectivity as the 2016 MacBook Pro. On the left of the computer you get a USB-C port and a headphone jack, and on the right you just get the solo USB-C port. Good, I thought, at least I can charge this laptop from either side. Well, no. Only the left jack accepts power, and you’ll get an on-screen notification to use it if you try plugging a charger into the right one. It’s 2017, two years after Google showed how to do this with the Chromebook Pixel 2, and new laptops are still failing to match the simplicity of having a charging-capable port on both sides of the PC.

With the lack of connectivity options from the MateBook X, you’ll have to develop a commitment to dongles as part of your regular PC gear. Huawei is thoughtful enough to include a USB-C adapter for HDMI, VGA, and an old-school USB port, plus a USB-C pass-through. You can use that small brick to pass power into the MateBook X’s left port, but displays can only be connected into the laptop’s right port. Don’t ask me why. I’m just following the notifications on the screen and trying not to scream.

If the impression you’re developing so far is one of superb hardware engineering and sloppy software implementation, you’re on the right track. The notifications advising me how not to use the USB ports are part of Huawei’s MateBook Manager, which — in the spirit of all other first-party PC management software — just duplicates basic Windows functions and probably uses up too many system resources. Most of the Manager dialogs are written in broken English, and I only find it useful as a driver update utility.

Huawei hasn’t laden the MateBook X with a mess of additional bloatware to slow things down — it’s actually running a Signature Edition of Windows 10 that eschews bloatware — and if you avoid using the jittery touchpad, the laptop feels smooth and responsive. That’s to be expected from the top spec of Core i7-7500U CPU and 8GB of RAM — which is adequate for basic and web-based tasks, but shouldn’t be considered for professional multimedia work with tools like Adobe’s Lightroom. Additionally, the bottom of the machine can get really hot when it’s running at full power, so it’s best suited for lighter tasks.

This would be the point where I might suggest the MateBook X is designed to serve ultra-mobile purposes and to be a journalist or student’s best note-taking friend, but that awful touchpad keeps resurfacing as a problematic sore spot.

Battery life was my biggest concern going into this MateBook X review, and I was unfortunately right to worry. I can’t get more than six hours off a single charge with the MateBook X, even when I’m being frightfully efficient and just writing in a lightweight text editor and browsing the web. Typically, this laptop will start demanding a charger around the five-hour mark, which to me is an unacceptable trade-off for its extreme thinness. I’d happily tolerate a thicker machine with a battery larger than the MateBook’s 5,449mAh. Hell, my favorite portable music player, the Astell & Kern Kann, has a 6,200mAh battery, so I really can’t agree with Huawei’s decision here.

The display is nice, but the battery doesn’t last

This laptop’s screen is part of its endurance problem. At 2160 x 1440, it has a satisfyingly high resolution, but every extra pixel on it comes with a battery life cost. I also find myself having to raise the MateBook X’s brightness up above the mid-level mark, which is an issue the MateBook shares with the latest MacBook Pro models: both laptop models require elevated brightness for comfortable viewing. I’ve disabled Huawei’s auto-brightness because that tries to cheat by aggressively dimming the screen.

Lest I sound too negative here, I should underline that I do very much like the MateBook X’s display. Its minimal bezels are delightfully absent, and even though it has a glossy Gorilla Glass cover, it seems to have very low reflectivity. I just wish it didn’t make me feel guilty about running down the battery every time I open it up and set a reasonable brightness.

Also worthy of commendation is the Dolby Atmos sound that Huawei proudly advertises on the box of the MateBook X. In terms of speaker output, this is one of the best-sounding laptops I’ve yet experienced, and I don’t particularly care if Dolby or Huawei deserves the praise for it. The bass is a bit light, but the clarity, even at high volumes, is exceptional. Unlike probably any other laptop out there, I find no piercing treble spikes to worry about. It’s just very good.

The theme of my time with Huawei’s MateBook X has been a series of delightful little touches — such as the fingerprint sensor integrated directly into the power button — spoiled by a less numerous but more serious set of displeasing downsides. The keyboard’s great, but the touchpad’s garbage. The display is nice, but the battery doesn’t last. The laptop’s feather-light, but it forces me to carry dongles everywhere.

I really wanted to love the Huawei MateBook X. If I had to sketch my perfect computer, I’d draw something very similar to this extremely thin, extremely well-built laptop. But I can’t use it for its intended purpose as a go-everywhere ultraportable PC because of its atrocious touchpad. And even if I bring a wireless mouse along, the MateBook X’s battery lets me down.

Much like last winter’s MacBook Pro refresh, this MateBook leaves me feeling like I’ve sampled the future of laptops prematurely. Huawei could stick with this exact same design for the next half decade and it wouldn’t feel old or out of place. All the company needs to do is capitalize on its engineering strength by providing more basic utility for everyday use.

Give me a bigger battery, charging on both sides, and a reliable trackpad, and I’d gladly pay for the privilege of that sweet-sounding Dolby audio system and lovely-looking design.

Our review of Huawei MateBook X 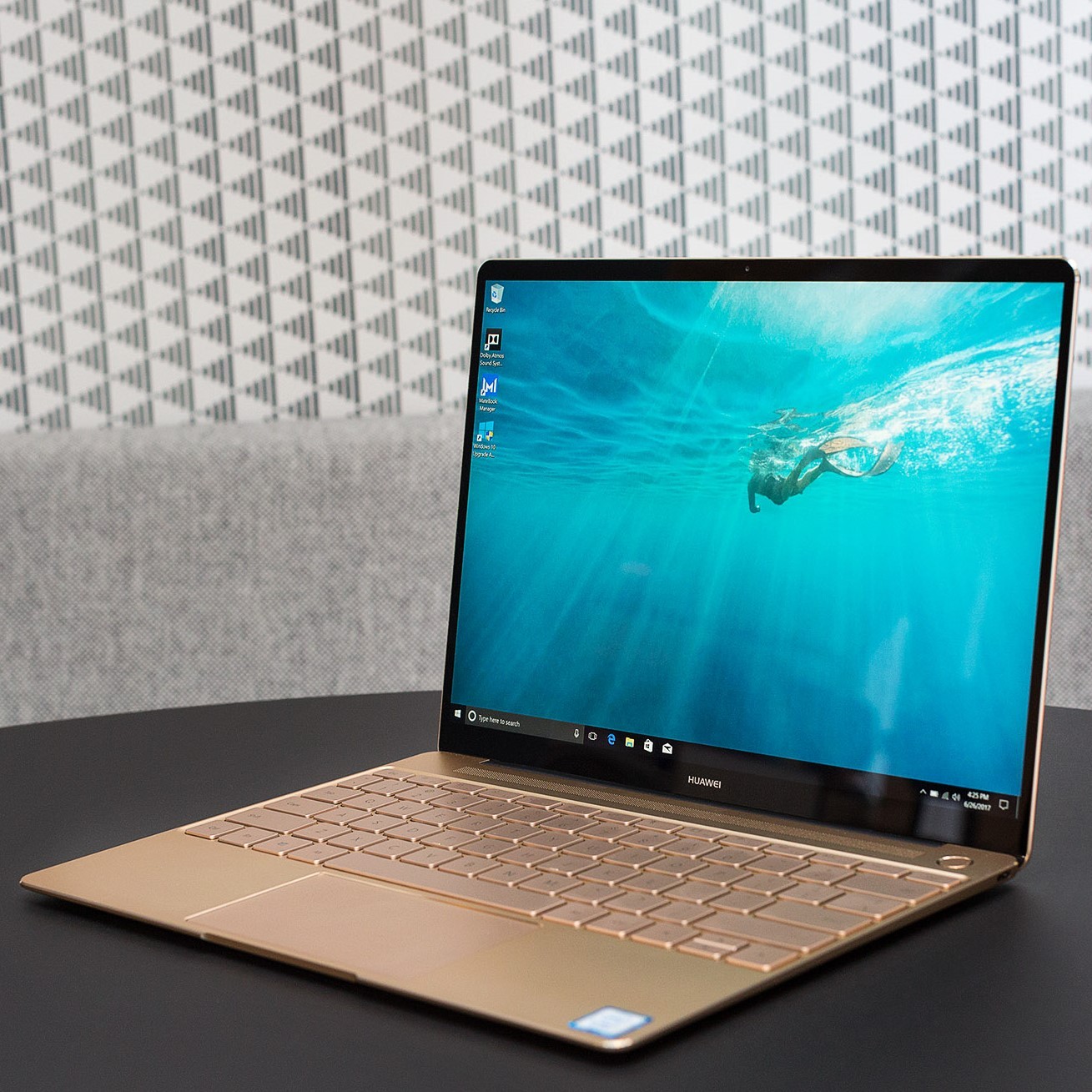