I've been reading The One Device by Brian Merchant (I highly recommend it, and would love to have a thread dedicated to it). And I happened upon this little tidbit right here: 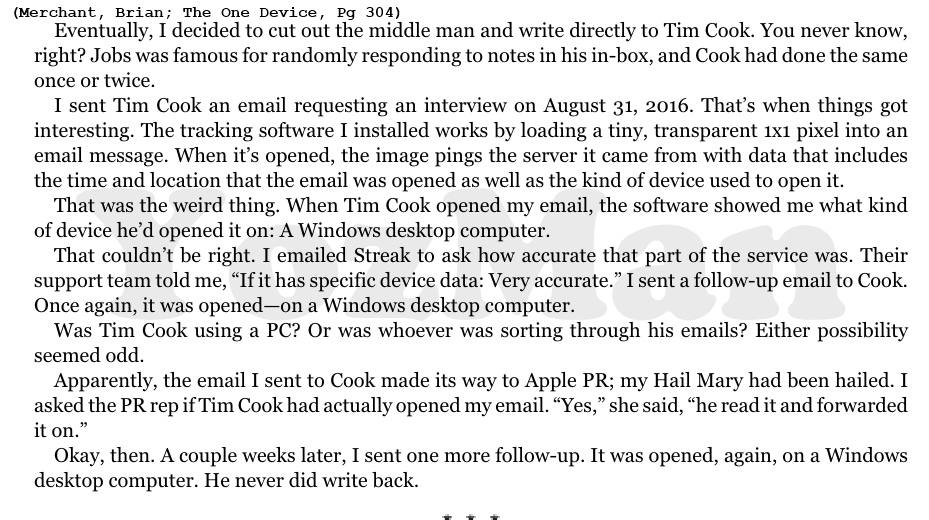 What do you guys think, does he really use Windows or is Streak just broken? Or maybe he's using some mac prototype and they're using a user-agent mask to hide the true ID of the device he's using.

Update: Truth is even if it is one of the PR guys who replied and not Tim Cook himself who was the first to open the email, it's still strange that it was opened by a windows machine, you'd think the whole exec team would be using Mac. From my understanding of Streak (I did a little more research since publishing this), it really wouldn't give out a desktop unless it was reasonably sure it was correct. In fact, due to changes gmail made a few years ago, if the email is opened by a gmail account, there's a lot less info to go on, and Streak might only be able to say that the email was received but not when, how, or by who it was opened. So if it's spitting back an OS, that means it's probably that OS or someone doing a reasonably good job of spoofing that OS. Then the question is, why is Tim Cook or his assistant spoofing Windows instead of latest public version of MacOS?