Having Alexa and Amazon’s software built into a TV is great, but the TV itself needs to be better

It makes total sense that the best thing about Element’s new 4K Fire TV is the software. This is the first television powered by the same software you can find on Amazon’s lineup of streaming boxes and sticks. It’s easy to use, fast, and it offers hundreds of apps — including nearly all the popular streaming services anyone could need: Netflix, Amazon Video, YouTube, Hulu, and so on. And now it features Alexa, the company’s voice assistant, which can do things like open streaming apps, answer general questions, and control the gadgets in your smart home.

What’s different this time is that, rather than building that experience around a product you plug into your TV, Amazon is shifting to become the TV’s core operating system — just like Roku has already done to wide success. It’s better than the software on a lot of “smart” TVs — especially budget models — and Amazon is taking extra steps to up the allure for cord cutters by including a cable-like channel guide if you hook up an antenna. Unfortunately, the TV hardware itself is average at every turn. That’s particularly tough to swallow after I just came from reviewing TCL’s 4K Roku TV with Dolby Vision, a set that obliterates other TVs that cost under $1,000 — and many that are priced far higher.

Depending on where you buy it, this TV will either be branded as Element or Westinghouse. But regardless of the logo beneath the screen, it’s the same exact product in both cases. I tested the 55-inch model, which is currently sold out on Amazon after a steep Prime Day discount; it normally sells for $650. A smaller 50-inch size is $500, and the largest model (65-inch) costs significantly more at $900. Unless you took advantage of that Prime deal, I can’t recommend buying any of them. The competition is just getting too good, and you can get the best thing about this TV — its software and Alexa — by just plugging in a Fire TV to your existing television. You’ll lose out on the convenient integration of live TV, but that’s really it.

The gray, matte look of Element’s TV is simple and won’t distract from your content, which is really the best thing you can say about a TV’s design. Anything is better than glossy black. Around back is the usual mix of connectivity options including 4 HDMI 2.0 ports (with HDCP 2.2), an SD card slot, two USB ports (one of them 3.0), component video, optical audio out, Ethernet, and a headphone jack. The included remote is nearly identical to the one bundled with Amazon’s Fire TV devices and has the same circular navigation pad, but it now includes shortcut buttons for Prime Video, Netflix, and Amazon Music underneath. There’s no built-in headphone jack on the remote, and that’s disappointing since I’ve really come to appreciate the private listening feature offered by Roku and some video game consoles.

Switch the TV on and you’ll be introduced to Amazon’s Fire TV software, which was completely overhauled in December and is now significantly more sleek and modern than Roku’s grid of apps. It’s less customizable, however. You can reorganize a Roku’s main menu to your liking, but that’s not true of Amazon’s platform. Once you’ve finished downloading the important streaming services you want, you can start familiarizing yourself with the home screen, which includes numerous rows of suggested content — yes, it’s a lot of Amazon stuff — and others for Your Apps & Games, Recent, Inputs, and On Now. Since Amazon is running the whole TV, it puts your HDMI, antenna, and other video inputs in easy reach. You can also switch between them using your voice and Alexa. Navigating around the TV’s software was consistently fast and rarely lagged or showed any signs of slowdown.

If you don’t have cable, you’re really going to appreciate the work that Amazon has done to pull down listings for free, over-the-air TV programming. You get two weeks’ worth of guide data, and can simply tell Alexa to go to a channel by its name (“Alexa, go to CBS”) instead of remembering numbers. Live TV can also be paused for a short time since the TV has built-in storage. We’re only talking five minutes or so, so this isn’t any kind of DVR substitute, but you’ll be able to run to the kitchen or bathroom without missing any of your favorite prime time shows. If you subscribe to any premium channels through Amazon (HBO, Showtime, etc.), those will also appear in the guide right alongside whatever channels your antenna can receive. And live TV channels will appear in the Recent row right next to streaming channels. It’s all super well done, but none of this will work if you’ve got cable.

Since this is Amazon’s platform, Amazon’s content gets preferential treatment in many places. There are several home screen rows dedicated to Prime originals, plus all the movies and TV shows you can stream for free as a Prime member. (Other apps do at least get some promotion, like a “Netflix recommends” row.) Individual shows and movies from Amazon Video will appear in the Recent section, making it far easier and faster to pick up right where you left off. But that’s not the case for stuff from Netflix, where you’ve got to enter the app and browse to shows the regular way. It’s a small difference, but it’s one where the contrast sticks out. I’ve also found myself wishing that both the Roku and Fire TV operating systems would add some level of multitasking to let you hop between services without always having to start over again once you leave an app even for just a moment. At the very least, you can count on apps being regularly updated on Amazon’s Fire TV OS, which is something that isn’t necessarily true of all smart TVs.

This is the first TV that can be controlled with Alexa, which would be a much bigger selling point if the way that Element and Amazon had integrated the assistant didn’t feel so halfway there and incomplete. The TV doesn’t have any microphones built in, so you can’t just call out “Alexa” as you would with an Echo speaker. Instead, you’ve got to hold down the button when asking about the weather or telling Alexa to turn off one of your smart lights, hail an Uber, or play music or stream an episode of Sneaky Pete. I can understand that decision from a privacy standpoint. But it’s sorely lacking the convenience of an always-listening Echo.

On the subject of the Echo: as of right now you can’t yet control this TV running Amazon software with the Alexa-enabled speakers you might already own. It’s silly, and Amazon has already confirmed that it’s working to right that missed opportunity and enable cross-device functionality soon. Once that happens, you won’t always need the remote to control things by voice. As with the Fire TV and Echo Show, Alexa goes beyond audio answers and returns visual results for your queries to take advantage of the big display.

But in the end, that big LED display is the weakest part of this television, which is never a good thing. Sure, it’s 4K, but at everything beyond resolution, Element’s 4K Fire TV falls short of the competition from TCL and Vizio. Black levels are unimpressive, contrast is so-so, gaming input lag is rather high, and your options for making color adjustments and calibrating the picture are very limited if you’re not satisfied with the included mode presets. Motion smoothing is enabled by default, and starting off with the soap opera effect is never a good first impression. More importantly, there’s also no HDR support at all, which is getting to be just as crucial as 4K this year. It makes for a much better, more mesmerizing viewing experience with content that supports it.

The average picture performance turns downright devastating when you compare the Element against the recent TCL 4K set — with both Dolby Vision and HDR10. It’s rather unfortunate for Element and Amazon that the two TVs came to market at around the same time for about the same price, as it hands an easy and decisive victory to the TCL / Roku team. One is relatively future-proofed and offers stellar image quality, and the mostly other whiffs at both. Had this TV shipped a year or two ago, Amazon would’ve been in for a much more balanced comparison, but not today.

Eventually, some company is going to release a TV running Amazon’s software that looks phenomenal. And then this TV operating system battle between Roku and Amazon will truly kick off. It took a couple years for Roku TVs to reach that level, and I imagine Amazon will get pretty aggressive about catching up after this first-round loss. For now, the only reasons I can see for buying Element’s first try are if you can find it at a significant sale price or really want that live TV / antenna integration. As a basement or secondary TV where image quality isn’t the main concern, sure, maybe. But most anyone would be better off getting the TCL. And if you really like Amazon’s software, just plug in a Fire TV. Then you’d have the best of both worlds — and Alexa, too. 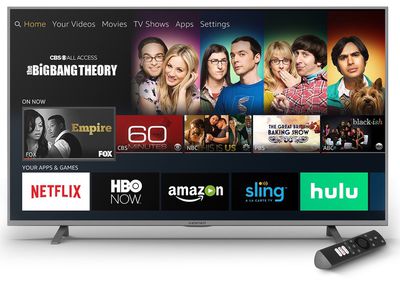