By Vlad Savov@vladsavov Jul 31, 2017, 10:45am EDT
Photography by Amelia Holowaty-Krales

There are three primary reasons why audiophile headphones remain a niche: they’re heavy, they look weird, and they cost a ton. Beyerdynamic isn’t doing anything to rectify the expense issue with its Xelento earphones, but it’s completely wiping out the other hurdles to widespread audiophilia. These $999 earphones, which I greeted with some doubt when announced at CES (does the world really need yet another pair of luxe earbuds?), have proven themselves outstanding in every parameter worth considering. The Xelento are that rare product that will fulfill the desires of both the niche enthusiast and the casual listener in search of something special.

As a preamble, it’s probably worth considering the current landscape of the earphones market. At the very high end, there are the custom-molded in-ear monitors used by professional musicians and made by the likes of Ultimate Ears and Noble Audio. Those might set you back as much as $1,600 or more, and if you’re especially wild, you could lay down $2,495 for Audeze’s LCD i4 planar magnetic in-ears. After listening to the Xelentos, however, I find everything priced beyond them to be interesting, but unjustifiably expensive. These Beyerdynamic buds have the sound quality and resolution to compete with anything else you can plug into your ears — and they win most head-to-head contests by virtue of their impeccable comfort.

But merely stating that the Xelentos are better value than more extravagantly priced rivals is only addressing half the story here. What of all the numerous cheaper models that I’ve recommended? The $40 Zero Audio Carbo Tenore are also super comfortable and sound pretty great. The $449 Shure SE535s provide some of the most dynamic, punchy, and faithful presentation of music I’ve heard from any earphones. Well, here’s the thing: sound quality and price don’t have a perfectly correlated relationship.

The things that people pay extra for with pricey headphones like Beyerdynamic’s Xelento are quality of materials, design, and aftersales service. I find the Xelentos’ sound excellent, but I couldn’t justify their price on that alone. It’s the combination of the superior sound with the perfectly polished metallic enclosures of the Xelentos — which are simultaneously gorgeous to look at and delightful to wear — that wins me over. It also helps to have the assurance that Beyerdynamic is treating these as its flagship earphones and is making them in Germany under its strictest quality control.

The design of the Xelentos thrills me with its simplicity and tactile appeal. These earbuds are like little pebbles that have been finessed by attrition into perfectly soft shapes. Beyerdynamic calls them “an audible piece of jewelry,” and for once, I’m going to agree with the corporate hyperbole here. Not only do I love wearing these, I love being seen with them on. Their mirror finish has remained spotless after months of admittedly careful use: no scratches or blemishes to speak of. Beyerdynamic notes that it’s used a three-layer metallic finish on the Xelentos that makes the surface “insensitive” to abrasions, solvents, or perspiration.

Beyerdynamic provides a pair of cables with the Xelento, one of them carrying the iOS and Android-compatible remote control that gives the earphones their full name of “Xelento remote.” I’m not super psyched about the attachment mechanism for these wires, which is an industry-standard MMCX connector: those can wear down if you switch around a lot, so I’d suggest sticking with one cable until it breaks down or you find one that’s somehow better. I’ve precious few complaints about Beyerdynamic’s provided remote control wire: it doesn’t tangle easily, it doesn’t transfer noise into the earphones from rubbing against my lapels, and it pretty much disappears once the Xelentos are in place.

From among the provided set of 10 different pairs of Xelento tips, I opted for the medium-sized Comply foam tips. That’s how I did all of my listening tests and it’s most likely the best way to enjoy the Xelentos, as the foam ensures the best combination of long-wearing comfort and insulation from external noise. If previous unhappy experiences with messy foam tips have put you off, I’d encourage you to give them another try with a high-end pair like the Xelentos — high-quality tips can make a big difference. Beyerdynamic also bundles in a nice carrying case that has slots for each earbud and a thing to roll the cable around. Though I find that case better suited for long-distance travel or long-term storage than a daily commute, for which I use a generic hard case.

We’ve probably all grown so used to fake chrome accents and unnecessarily shiny things that when something as pristine and exquisite as the Xelentos comes along, it’s hard for us to appreciate it. But make no mistake about it, these earbuds are beautiful. And my joy is only multiplied by the fact they sound even better.

Beyerdynamic has shrunken the Tesla technology that goes into its best over-ear headphones (such as the T5p.2 I reviewed last year) for the Xelento. What that means in listening terms is that you get the same sort of intense, sparkling high end that Tesla cans are known for, but without any harsh edge. I’m especially sensitive to overexuberant treble, so if the Tesla drivers here don’t freak me out, you’ll be safe.

Like a meal at a Michelin restaurant: the plate is never full enough, but everything tastes sensational

The tonal balance of the Xelentos does favor treble and the mid-range more than my favorite headphones like the Focal Elear. But even as an admitted basshead, I appreciate the precision and tautness of the bass that these earphones pump out. It’s like a meal at a Michelin-starred restaurant: my plate is never as overfull as I’d like it to be, but everything I’m tasting is sensational.

Coexist by The xx is the album that really exposed the brilliance of the Xelentos to me. What these earphones are great at is vocals, and that album is the perfect match. There’s plenty of instrumentation around the vocalists’ voices, but it’s their interplay that is the focal point of the music and it hits on the Xelentos’ sweet spot. I found myself transfixed and unmoving while listening through the whole album. Classical and other acoustic music sounds simiarly engaging and lifelike through these Beyerdynamic buds. There’s just a whirlwind of detail swirling around my ears, but it’s all so composed and realistic that I can practically reach out and touch the violin strings or drum skins.

Exposing their genre versatility, the Xelentos are also the best way I’ve ever heard Nine Inch Nails’ Pretty Hate Machine, articulating every single nuance of the multilayered electronic compositions. The only type of music where I didn’t feel the Xelentos were giving me everything I wanted was in hard rock like Rage Against the Machine’s eponymous album. For that, I swapped to the Shure SE535s to get a more unvarnished and direct performance. The Xelentos are a little too refined and unwilling to send screaming aggression down my ear canals.

Without a bass boost to offset noise, the Xelentos are not ideal for listening to on your daily commute

The only performance downside of the Xelentos is one you might be able to guess. They’re not great at being used in noisy outdoor environments or on flights. Their bass response might be perfectly judged for a quiet listening room, but bass is the first thing that gets lost when you step out into a busy street (which is why so many portable headphones have a pronounced bass boost) and I feel that loss with the Xelentos. The sound I love and hunger for in my living room or in a quiet office is heavily degraded when I’m out and about. This is not to say they’re useless outdoors, but they’re more sensitive to external noise than an alternative with better isolation (like the Etymotic ER4XR) or just more bass (like the 1More Triple Driver).

If the Beyerdynamic Xelentos look like super expensive and fancy earphones, that’s because they are. But they’re the best sort of fancy. Their visual flair coincides with a flawless fit and is backed up by a musicality that’s hard to match. There are few pairs of headphones, in-ear or over-ear, that sound qutie this smooth and elegant. Nothing about these earphones’ sound upsets me, and yet they never let me lapse into forgetting I’m listening to a truly high-end pair.

But even with as much musical fidelity and visual appeal as the Xelentos have, they still cost $999. That’s a long way to stretch your budget just to have an arguably incremental upgrade over something like the Shure SE535s. My heart says the Xelentos are worth their cost, but my mind says they obviously don’t provide the best value for your money. Still, if you measure them solely on the question of whether they will delight or disappoint you, the Beyerdynamic Xelentos are an undeniable winner.

Our review of Beyerdynamic Xelento 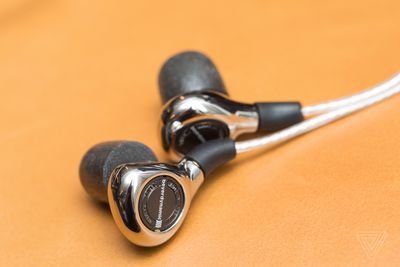