The best at nothing, but great at most things

Share All sharing options for: V-Moda Crossfade 2 Wireless review: the everything headphones

I have a confession to make, but it’s not about me, it’s about you. You’re terrible at buying headphones. The typical list of demands when someone asks me for headphone advice is tantamount to wanting a Ferrari with great gas mileage, tons of luggage space, and the price of a second-hand Trabant. There’s nothing you don’t want, no scenario you’re willing to compromise on, and you’re not particularly keen to spend a lot. I understand this, because I’m often the same way, but some of these contradictory priorities will have to budge at some point.

If you’re willing to spend more than a few bucks on portable headphones, but still insist on a pair that’s suitable for absolutely everything, the $330 V-Moda Crossfade 2 Wireless might be for you. These are the most versatile headphones I’ve yet tested, offering good sound whether wired or wireless, at home or on the move. They’re also designed to withstand extraordinary amounts of punishing use, ensuring the safety of your investment when purchasing a pair. And they shrink down into a lovely case.

V-Moda proudly touts the Crossfade 2 Wireless and its predecessor models of the Crossfade Wireless and wired M100 as the essential DJ headphones, with CEO Val Kolton claiming that more than 40 percent of DJs around the world use V-Moda cans. I spoke with Val recently, and he noted another interesting demographic point: the Crossfade 2s have been selling best among gamers and bankers. Now that’s a diverse customer range.

What unites DJs, gamers, and bankers? These headphones, apparently

The shared benefit for DJs and bankers is the compactness and flexibility of these over-ear headphones. You can twist and torque the signature V-Moda headband in any direction you like; it’ll survive any human force you put into it. You can wear them with one pad pushed behind your ear and you can throw them around the stage (or trading floor) without worry. The aluminum ear cups are rock solid and are liable to do more harm to anything that hits them than they would take. In terms of design, they’re also fairly unisex, though V-Moda’s styling is a peculiar sort of quietly shouty, featuring undisguised screws and uncovered metal yokes.

The Crossfade 2s also offer some very respectable noise isolation, which is where I suspect the gamer / banker overlap comes in. You want to be able to tune out roommates during long gaming sessions just as much as you want to hear less of the din of a moving commuter train. Because they have a sealed back, these headphones don’t leak much of the sound of your music out to people nearby — which is what makes them a superior choice to something like the utterly excellent Sennheiser HD650/HD6xx. The Sennheisers sound better, but have an open back that makes them unsuitable for use with others nearby.

A big improvement that Kolton and his V-Moda team have made with the Crossfade 2 Wireless is in the ear pads. Kolton spent countless days personally testing hundreds of different material, size, and shape variations to perfect the pads for these headphones, and I feel a real improvement. The new pads contribute to the external noise isolation, help shape the sound inside, and improve on the fit and comfort relative to previous V-Moda headphones. I own a pair of M100s, which look mostly the same as the Crossfade 2s, but I always develop sore spots after wearing them for a while. Not so with V-Moda’s newest pads.

I wouldn’t say that the Crossfade 2 Wireless are exceedingly comfortable, but neither are they burdensome. At 309g / 10.9oz, these are on the heavy side for a pair of portables, and someone with larger ears like myself can start to feel a little claustrophobic inside the close confines of the over-ear pads. But this is one of the compromises of which I speak: to have more room for my oversized noggin, I’d need to step to something far less portable like the $800 MrSpeakers Aeon or the $900 Bowers & Wilkins P9. With V-Moda, you accept the trade-off of extra weight for the benefit of extra durability and you take a little less comfort for the sake of compact portability. I really do like the hard case that comes with these cans, which can be easily strapped to the outside of your daily carry bag with the provided carabiner clip.

V-Moda’s sound signature has long been known for Kolton’s preference for exuberant, aggressively thumping bass that aims to recreate the feeling of being in a club. Not a primly proper classical concert venue, not your mahogany-furnished study, and not a recording studio. That approach has been great for those who are into electronica and hip hop, but it’s also what makes cans like the original M100s so good for commuting as you always want a little extra bass when on the move. Well, the Crossfade 2 Wireless pretty much do away with all of that heritage.

The more balanced sound is likeable, but not lovable like that of the M100 predecessor

These are the most sonically balanced headphones V-Moda has yet produced. The drums still kick and bang, but it’s not the same sort of mind-scrambling bass experience that I get from the M100s. I miss that. My favorite way of listening to the album stuff i used to do by deadmau5 is through the M100s: they thicken up the low end and their condensed presentation makes the music feel intimate and up-close. The Crossfade 2 Wireless lack the same sense of warmth, and though they’re hard to criticize in their performance, I just don’t engage with them in the same emotional way. I think V-Moda has gone toward the hallowed middle ground of neutrality, and I think fresh listeners will like the tuning of the Crossfade 2s, but I can’t go beyond liking this sound. Whereas I love the excesses of the M100 sound.

There’s a substantial difference to be heard when going between wired and wireless modes with the Crossfade 2s. Kolton tells me that these were designed, first and foremost, as wired headphones, and that the wireless option is there as an expanded bit of flexibility rather than the primary use mode. I applaud that unusual choice. Most of the competition from the likes of B&O Play, Bowers & Wilkins, and Apple’s Beats is designed for wireless use first and wired as the afterthought fallback. With these V-Modas, I find the wired playback sweeter and more detailed. The high end is evened out and there are no aberrant peaks to disturb my listening, which I very occasionally find while listening wirelessly. Bass extension also goes deeper with the wire plugged in.

There’s no cheap plastic to be found here

V-Moda sells a $350 option of the Crossfade 2 Wireless with support for Qualcomm’s AptX HD codec for supposed CD-quality sound. That’s the pair I’ve been testing and I can’t say I’ve noticed enough to recommend the $20 upgrade. Most smartphones outside of LG’s audiophile-friendly lineup lack AptX HD support, and even the devices that have it haven’t shown me enough of an improvement to justify spending extra. You’ll just have to accept that wireless sound quality isn’t as good as wired and live accordingly. That being said, I’ve had great results with taking calls wirelessly using the built-in microphone on these headphones.

Whatever wireless dropouts I’ve had with the V-Moda Crossfade 2 Wireless have typically been the fault of my phone rather than the headphones themselves. The classic Bluetooth death grip of the Google Pixel, for example, will interrupt transmission, but otherwise these are very reliable wireless cans. As usual with Bluetooth accessories, you’ll occasionally struggle to find and pair these V-Moda headphones with your mobile device. But once you’ve got them talking to each other, it’s generally a faultless experience.

I also enjoy how long the battery of the Crossfades lasts, giving me as much as 10 hours of playback on a single charge. I still haven’t been able to fully drain the battery, which speaks to its endurance, yes, but probably also hints at the fact that I don’t find these headphones perfectly comfortable for long listens. Another minor quibble, given that we’re now in the middle of 2017: V-Moda’s choice of a MicroUSB charging port here is spoiling my “everything USB-C” tech nirvana and I’m not thrilled about that.

In the world of headphones — more so than something like smartphones where you can have upgrades without downsides — every little nudge in one positive direction tends to come with a corresponding retreat in some other area of desirability. What V-Moda’s Crossfade 2 Wireless represent is the most even balancing of all our competing priorities. I can enjoy them on a quiet afternoon at home, plugged into my high-end audio gear. Then I can detach the wire and go out on a walk into the city with them. They aim to provide big sound in a compact package and, for the most part, they succeed.

Priced at $330, the Crossfade 2 Wireless are neither cheap nor, by the standards of premium headphones, expensive. They’re just right there, in the middle. Their sound is rather like that too: not too bassy, not too exciting, but also not disengaged or boring. That’s a lot of negatives, but I guess that’s my abiding impression of a pair of headphones that wants to please everyone. It isn’t any one thing.

Our review of V-Moda Crossfade 2 Wireless 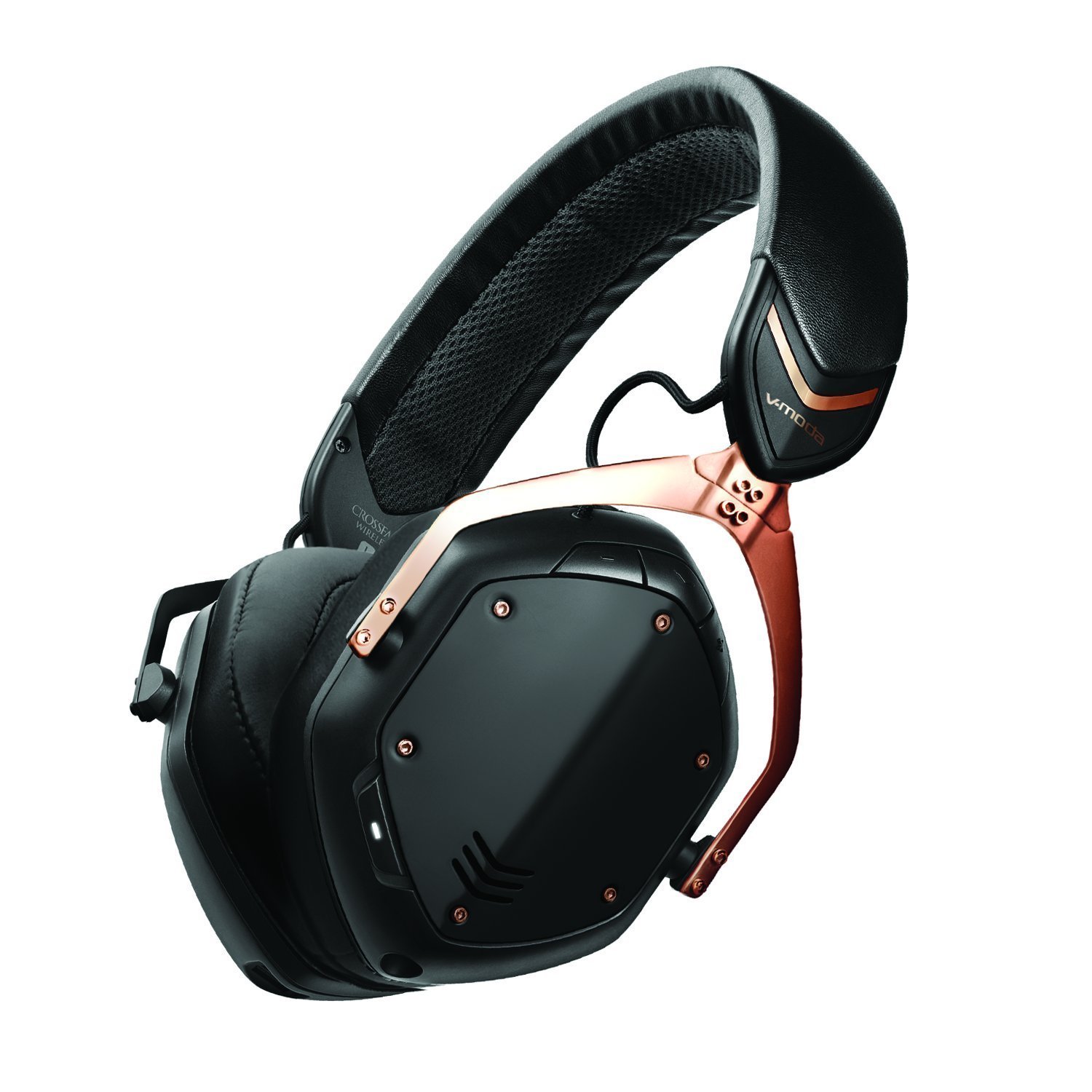