Just why am I reviewing $1,299 earphones? I found myself pondering this question while rolling Fender’s new FXA9s around in my hand like a pair of translucent, expensive pebbles. The number of people in the market for such things is obviously limited, and I can’t imagine many of them would be making the decision based solely on my review. But I think of it the same way that I think of cheat codes in video games: I use those to understand the game without its usual constraints, which tends to help me win when I get back to playing without cheating.

The Fender FXA9s are professional in-ear monitors (IEMs) designed to be used onstage. Their price is close to three times that of Fender’s previous flagship model, the FXA7, and it seems to have been set only after the product was developed. In other words, Fender set out to make the best possible in-ear headphones it could and let the price take care of itself. So what is there to learn from these technologically marvelous and visually mesmerizing new earphones? Quite a bit, actually.

I loved last year’s FXA7s for one simple reason: they had beautifully exaggerated bass that made me laugh and giggle at the way it turned all my music into a booming freight train ride. There was no pretense of fidelity that I could detect, just a joyous caricature of every song that was nevertheless realistic enough to be charming rather than grotesque. From among the headphones I reviewed in 2016, many of which were more accurate and had a wider soundstage, it was those Fenders that I missed the most after the review period. Forget technical performance numbers and charts, the FXA7s warmed my soul.

The FXA9s have Fender’s tried-and-tested design, which is comfortable and easy to wear

This year’s FXA9s reprise the 3D-printed shells and unique silicone thermo-plastic elastometer eartips of Fender’s FXA range, so I was rather hopeful for an FXA7 with just more of the same. Nothing could be further from the truth. The FXA9 flagship is the clean-shaven, suit-and-tie Fender earphone that’s grown out of the collection of grungy, long-haired bassheads that characterize the rest of Fender’s lineup. It’s a jarring change, especially since the company’s entire expertise — derived from Aurisonics, the small Nashville boutique that Fender acquired to design and build its IEMs — is in making the earphones with the biggest and baddest bass.

While I was adapting to the FXA9s’ entirely different sound, I still appreciated the familiar comfort and fit that they carried over from the Fender FXA7s. The Aurisonics / Fender team developed the shape of its in-ear buds by studying scans of the ears of thousands of people, and the end result is said to fit 95 percent of ears. I’m among the 95 percent of satisfied users, finding the bulbous FXA9s a relaxed and easy fit that doesn’t fatigue or irritate me at all.

Best silicone eartips in the business

Fender also has the best silicone eartips in the industry: they are super malleable and ensure a solid seal that passively neutralizes a lot of exterior noise. Unlike the Beyerdynamic Xelentos that I just reviewed, Fender’s earphones are as good out on a busy road as they are when listened to in a quiet room. I really like the way they re-create the advantages of custom high-end IEMs — great noise isolation; contoured, ear-fitting shape; and multi-driver balanced armature architecture — in a design that has a universal fit. I have a couple of custom IEM sets, which I love dearly, but they do go quite deep inside the ear and are not the best for casual listening in bed, for example. Fender’s FXA9s compare favorably because of their reliable comfort and slightly lower price.

I find the FXA9s very easy to wear, handsome to look at with that big Fender “F” logo, and easy to maintain. But I could say all of these things about all of Fender’s preceding FXA models. What distinguishes the FXA9? The answer is in what’s on the inside, where Fender has moved to an array of six balanced armatures per earbud, each one covering a particular range of frequency response. The advantage of this sort of internal architecture is the advantage of specialization over general competence: each individual mini-speaker can be perfected for its specific task and thus its sound can be as pure and distortion-free as possible. So goes the theory, anyway.

What I found while listening to the FXA9s was a total absence of distortion, harshness... and excitement. Fender has tuned these with a very smooth high end and a shy low end. Putting on my favored hip-hop albums by Run the Jewels and Sage Francis, I feel none of the bass. I can hear it, but I never feel it; and I’m of the opinion that bass should be more felt than heard. The FXA9s certainly demonstrate good technical ability by extending to reproduce very deep bass notes and high treble (this wide dynamic range is what makes the multi-armature design appealing), but they don’t really do much with that ability. Where Run the Jewels 2 on the FXA7 used to make me smile with joy at the overwhelming bassline battling for primacy with Killer Mike’s rapping, the same album on the FXA9 feels dry and unemotional.

Fender will tell you that the FXA9s are neutral, authentic, and faithful to the music. I disagree. This goes beyond my own preference for a warmer sound: I know how albums like PJ Harvey’s Uh Huh Her should sound, and the FXA9s come close but fail to re-create that. Their sound feels somehow thin, artificial, and unconvincing. Playing music with these earphones is like playing basketball with a ball that’s been pumped up too much. The usual bounce, snap, and rhythm just aren’t there.

The laudable goal behind the FXA9s was to elevate the Fender IEM sound beyond the category of a mass-pleasing bass thumper and into the professional realm of accurate, precise sound reproduction. That’s possible to do, and I would argue that the Beyerdynamic Xelento are a great example of an in-ear headphone that doesn’t serve lashings of extra bass, but can still provide an engaging listen. Unfortunately, Fender just didn’t execute the plan it set out for itself. Balanced armatures have often been guilty of sounding unnatural, and the Fender FXA9s are a salient example of that. They give you lots of technical precision, but lack the subtle cues of realism that our minds register unconsciously. (Distortion, especially in the bass region, might be an aspect of that, as we’ve all grown accustomed to hearing it. Its absence, even if technically desirable, could make music feel less believable.)

It’s almost an unwritten rule in the headphones industry that as the price of a product goes up, its bass response goes down. I’ve never been a fan of that move, which would suggest that audiophiles are miserly sonic accountants instead of lovers and fans of music. Alas, Fender’s FXA9s only serve to illustrate why this trend is inadvisable, deadening the sound with a presentation that lacks dynamism and excitement. I guess the lesson we can draw from this is that not everything that has a higher price and model number is necessarily better.

I review earphones that cost unreasonable sums of money because sometimes, as with the Beyerdynamic Xelento, I find rare examples that could be justified as unreasoning, emotional purchases. I also review them just to know what the rest of us are missing out on. In the case of the Fender FXA9s, the answer is nothing. I still miss the FXA7s.

Our review of Fender FXA9-Pro 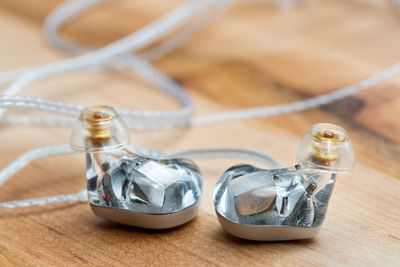