The best-sounding Bluetooth headphones are unfit for mobile use

Here’s an example of a product that’s impossible to grade with a single score: the Audio-Technica DSR9BT headphones. They are unique both technologically and practically, providing the best sound out of any wireless headphone yet, but only in limited circumstances. They outperform every other pair of Bluetooth headphones when listened to in a quiet environment, but they fail miserably when taken out into the din of a busy street.

I’ve been excited about the $549 DSR9BTs since I first heard Bjork’s Homogenic through them at CES in January. The soundstage and stereo separation from these nominally closed-back headphones are exceptional, and Bjork’s voice is recreated with affecting fidelity. Pressing play on these cans is going to wow most listeners, because they just don’t sound like wireless headphones. In all of my testing and experience with headphones, I’ve never heard anything so pure and undistorted without a wire attached.

The DSR9s reproduce treble that rises majestically to match the intensity of vocals yet is still sufficiently refined to not assault the listener’s ears. This is not to be taken as a given with all Audio-Technica headphones, as the popular M50s from this same company have spiky treble that’s best appreciated by people with at least a little bit of hearing loss. But Audio-Technica really nails the sound balance with its wireless DSR9s, which are lifelike, dynamic, and never boring. When Bjork rolls her Rs on “Unravel,” it sounds like a cat purring, and it produces a similar effect of deep satisfaction in me as a listener. It’s not just Bjork, either: 2Pac, Stromae, PJ Harvey, and all other vocalists also sound engaging and real.

Audio-Technica, like the majority of Japanese headphone companies, tends toward a leaner sound that emphasizes the higher registers and leaves many people feeling undernourished on the bass front. The DSR9s are in danger of entering that territory too — they certainly can’t be accused of giving you too much bass — but they have just enough thump to satisfy. It’s a tricky issue, bass, because the more of it there is, the less high-end detail will be perceptible in the playback of music. Audio-Technica’s chosen tuning works because the realism and tight precision of the DSR9 bass is such that it still delivers the impact of the song or movie being listened to.

The Audio-Technica DSR9s are the first pair of headphones in a long time that I’ve spontaneously danced to. They’re also the first wireless pair that I’ve managed to completely drain the battery of. I got about eight hours at a high volume, which isn’t much by the broader standards of wireless cans. Though if you’re judging by sound quality alone, it’s still eight hours more than any other wireless headphones can achieve at this level of fidelity.

I’m okay with the DSR9s not having the longest battery life for one major reason: I’d never want to take them too far away from home anyway. Every good thing I’ve said about their sound must be couched in the context of me listening to them in a reasonably quiet environment. They’re awesome to have at home, excellent to use when you want to zone out everyone else in the office, but you shouldn’t try to use them while commuting between those two locations. Certainly, if you’re flying with these cans, your best bet will be to just leave them in their nice, semi-rigid protective case.

Using the DSR9s on the London underground, I hear that tenderly balanced sound collapsing under the weight of the train chugging its way through the tunnel. The bass becomes anemic, and the emotive impact is lost. Walking out into the crowds of the central Oxford Street shopping area, I yearn for a quiet spot so I can once again get that superb, emotional DSR9 sound. This is a problem.

Wireless headphones exist for their convenience and mobility. Closed-back headphones have that design to try and isolate external noise from the music playing on the inside. Both impose design limitations on headphone makers, who could create awesome sound much more easily if they go with a wired open-back design (such as, for example, the Sennheiser HD 650s); it’s just much simpler. Audio-Technica’s DSR9s are both wireless and closed, both things aimed at making them suitable for portable use, but they completely fail at that task.

I trust you now understand my quandary. Do I rate these headphones on the undeniable strength of their organic, beautiful, hi-fi sound when listened to indoors, or do I dismiss them on the basis of their unsatisfying performance outdoors?

The details of their practical use also leave me conflicted. On the one hand, the DSR9s are light, well padded, and comfortable for long periods. But the pads do heat up my ears, especially in the summer, which undermines the degree of comfort. The ear cups fold down to a flat shape, but don’t fold in (which competitors like the V-Moda Crossfade 2 Wireless do) for a more compact and portable shape. There’s a physical volume control built into the left cup, just below a touch-sensitive window for play/pause control. The latter is positioned right where your left thumb would land when removing the headphones — a deliberate design touch to allow you to take them off and pause at the same time. That’s great except I also find myself accidentally activating that control when merely adjusting the headphones.

One final peculiarity: because of their unique Pure Digital Drive architecture, the DSR9s don’t accept a conventional analog signal via a 3.5mm cable. Your only options for connecting them are wirelessly or via the provided USB cable. Both sound excellent to me.

Ultimately, I think the DSR9s at their best are simply too good to be dragged down by their limited usage possibilities. Stacking them up against any $549 headphones, I’m grabbing the DSR9s just because I feel the music when it flows through them. Movies are more immersive, voices are more realistic, and distortion is practically nonexistent. The DSR9s sound better than pricier alternatives like the Bowers & Wilkins P9, Audeze EL-8, Denon D7200, and AudioQuest NightHawks. In the world of wireless audio, their sound quality is without peer.

The Audio-Technica DSR9BTs might be the most unique headphones released this year. They’re certainly not the do-everything audio solution that competitors like V-Moda strive to be. But if you’re willing to accept their limitations and work around their peculiarities, I think you’ll find the DSR9s are also some of the best headphones released this year.

Our review of Audio-Technica ATH-DSR9BT 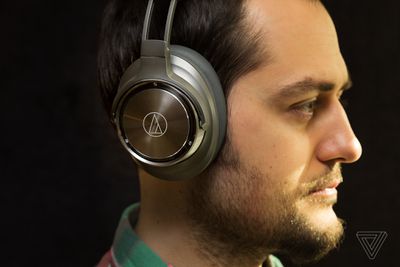