Asus ROG Zephyrus review: great at gaming, but not much else

Share All sharing options for: Asus ROG Zephyrus review: great at gaming, but not much else

What if your gaming laptop just looked like a laptop? That was the promise of Nvidia’s Max-Q tech that the company announced earlier this year — a new specification that could put the company’s most powerful GPUs into laptops that were just as thin, light, and quiet as a regular machine.

The $2,699 Asus ROG Zephyrus is one of the first Max-Q-designed laptops to come out, and it only partially succeeds. Taken as a gaming laptop, the Zephyrus is one of the thinnest and most powerful options around, and marks a real step forward for the style of laptop. But while the Zephyrus may look like a regular computer on the outside, it still isn’t good enough to function for most purposes that aren’t gaming.

Asus has done a great job building a thin laptop — at 17.9mm thick and 4.93 pounds, the Zephyrus is closer in size to an ultrabook than a high-end gaming laptop. The frame of the laptop is a combination of aluminum and plastic, with a particularly striking bronze colored chamfered edge. The lid of the laptop uses a patterned brushed metal design, which looks really nice (although the effect is somewhat spoiled by the large silver ROG logo — and yes, it lights up with red LEDs).

But don’t be fooled by the size — the Zephyrus is packing some serious firepower. The model I tested had a 7th generation Intel Core i7 processor clocked at 2.8GHz, 16GB of RAM, and a 512GB SSD. And of course, there’s the GPU — Nvidia’s GeForce GTX 1080 with Max-Q Design and 8GB of VRAM. Taken together, it’s hard to come up with anything more you’d even want from a gaming laptop from a performance standpoint.

One of the more interesting quirks of the Zephyrus’ design is what Asus calls the “Active Aerodynamic System”, where a section of the bottom of the laptop opens when you lift up the screen.The company claims this design allows for a 20 percent increase in cooling performance. (And Asus wants you to know that it exists, with a pair of LEDs that light up your desk to draw your attention to the transforming vents).

Asus has a nice array of ports on the Zephyrus — four traditional USB 3.0 ports, a Thunderbolt 3 USB Type-C port, HDMI, and a headphone jack. And while the Zephyrus is too slim for an ethernet port, Asus is kind enough to throw in a USB to Ethernet dongle in the box.

Open up the laptop’s lid, though, and things start to get a little squirrely

Open up the laptop’s lid, though, and things start to get a little squirrely. Like most gaming laptops, the Zephyrus uses a 1080p screen. It’s the same tradeoff we’ve seen with plenty of other gaming machines — if you cut down on pixels to push, you’ll get better performance. But that doesn’t make the Zephyrus’ screen look any better when compared to incredibly pixel dense displays on most other high end laptops. Beyond the low resolution, though, the display itself is fine — viewing angles are good, colors are bright, and it supports Nvidia’s G-Sync technology for smoother gaming. Oh, and there’s a giant “REPUBLIC OF GAMERS” logo on the chunky bezel, which just feels tacky.

Additionally, Asus has made the decision to make cooling easier by loading most of the internal internal hardware to the back of the laptop by the raised up cooling area, meaning that the trackpad and keyboard are both shoved to the front of the device. The company does include a rubber wrist rest to use to make it a little more comfortable, but I can’t say that I’m a fan of the design, as it makes everything about using the laptop more uncomfortable.

Performance wise, the Zephyrus is a perfectly capable computer for pretty much any work you throw at it. But unfortunately, many of the gaming focused design decisions on the Zephyrus come back to haunt it if you’re using it for literally anything other than gaming, at a desk, with a mouse and the included wrist rest.

The 15.6-inch screen is plenty bright, with vibrant colors that are just as good for watching Netflix as it is for gaming. But the 1080p resolution makes everything feel both incredibly oversized and overly cramped, to the point where I was shrinking down text and UI elements just to be able to sanely use the computer.

The trackpad is a Windows Precision Trackpad, which already is enough to be one of the best trackpads on a Windows laptop. But because it’s to the side of the keyboard instead of below it, it’s frustratingly small and narrow to use, leading to me admitting defeat and just plugging in an external mouse after a few minutes. The trackpad does have a neat feature where it can turn into a number pad using hidden lights at the push of a button, which is fun (if not entirely practical).

The chiclet style keyboard is also fine in theory — the keys are roughly similar to those on say, a Surface Laptop or an older Retina MacBook Pro, but the partially plastic frame combined with the raised up vent mechanism means that the laptop tends to flex a bit when you push down hard on them. It’s not super noticeable, but I expect more from a $2,600 laptop. And of course, because it’s still a gaming laptop, the keys are both labeled in an obnoxiously edgy font and feature customizable glowing LEDs.

The biggest problem is the location of the keyboard, which is right on the front edge of the laptop. Typing on this — either for work or for gaming — basically demands the use of the rubber palm rest that Asus includes with the computer. And typing on it anywhere that’s not a desk is simply uncomfortable — turns out, we put palm rests on laptops for a reason, and that reason is that typing on a laptop while holding your hands up in the air is awful.

Battery life is a huge disappointment

Battery life might be the greatest disappointment, with the Zephyrus scoring just over 2 hours on The Verge battery test, which simply cycles webpages at a set display brightness, which is flat out terrible for a laptop. And gaming with this unplugged is more or less an exercise in futility.

But all of these complaints are pretty much par for the course when it comes to gaming laptops. Of course battery life, the trackpad, and resolution are bad. But if the point of the Max Q designs were to make gaming laptops more functional in the vein of a traditional machine, the Zephyrus fails at that.

Here’s the good news: while the Zephryus may not quite hit the mark as a do it all magic bullet, when it comes to gaming, it performs admirably, despite the smaller form factor. Like we’ve seen with other machines, such as the Razer Blade, the 1080p display means that the Zephyrus can focus its power on keeping games running smoothly. And the issues of the trackpad and battery life vanish given that when gaming you’ll likely be at a desk with a power cord and mouse anyway.

When it comes to gaming, the Zephryus performs admirably

Overwatch easily cleared 100fps, even with settings turned up to maximum levels. It’s not quite the frame rate shattering performance of the Predator 21 X, but it’s easily some of the best I’ve seen from a gaming laptop that doesn’t cost $9,000.

More graphically intensive games like Rise of the Tomb Raider similarly had no issues, and even a network taxing round of Battlefield 1’s 64-player online multiplayer ran without any hitches. Asus’ efforts to keep fan noise down are also pretty successful, and while it’s definitely noticeable that they’re up and spinning, it’s far less disruptive than other gaming laptops I’ve tried.

And while I may have my gripes about the low-resolution screen, I was able to hook up the Zephyrus over USB-C to a Dell UltraSharp 38 Curved monitor, where it proved up to the task of driving the dramatically larger display, although performance did lag a bit compared to on the laptop itself.

At the end of the day, I’ve got very mixed feelings about the Zephyrus. As it stands now, it’s a pricey gaming machine in an ultrabook’s clothing, but with none of the benefits of a more conventional laptop besides for size. Asus doesn’t even make any real effort to hide the fact that this is meant for gaming — the glowing LEDs and edgy design are still front and center (and on the bottom and the sides — Asus really likes its logos). And at the price, you can almost buy a Razer Blade for gaming and a Surface Laptop for regular use and still come out at roughly the same cost.

But the Zephyrus still could be an interesting first step, and as Nvidia’s Max Q designs continue to evolve, it’s possible that one day we could get a device that successfully merges professional and gaming laptops without the compromises that the Zephyrus makes. And that’s a really exciting idea.

Our review of Asus ROG Zephyrus 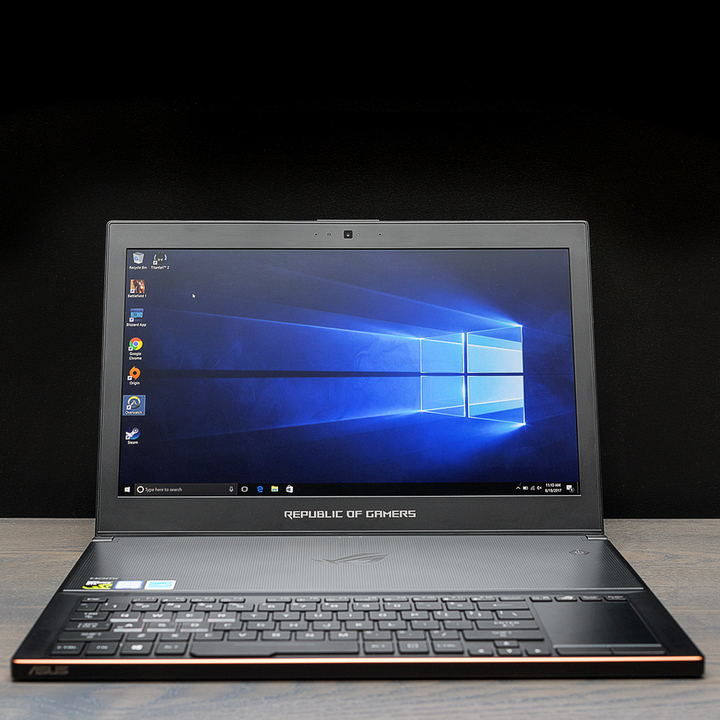 Basically useless away from a desk