HP’s latest 2-in-1 convertible is improved, but doesn’t match up to the Surface Pro

Imitation is a form of flattery. Great artists steal. You can choose whatever cliché you prefer, but the truth of the matter is that many of the products we use today are copies of, or at least inspired by, something that came before it. In the laptop world, Apple’s MacBook Air was the inspiration for countless Windows laptops for more than half a decade. In more recent times, Microsoft’s Surface Pro lineup has been the muse by which many PC makers have designed their two-in-one devices.

HP’s Spectre x2 is one of those devices. It’s a detachable two-in-one tablet that purports to replace your laptop. The x2 is basically HP’s take on the Surface, and it borrows many ideas and features from Microsoft. The latest version, which came out this summer, is closer to the Surface than ever before: HP upgraded the display and changed its shape to match the Surface; the speakers have been moved to the front bezel of the screen; and the whole package is thinner and lighter than before.

The main area where HP differs from Microsoft is in pricing: at $1,299.99, as tested, the Spectre x2 offers a more powerful processor and more storage than the Surface Pro. And unlike the Surface, which doesn’t include a keyboard or pen, the Spectre x2 includes both items in the box. A comparably equipped Surface Pro will run close to $1,830 when you add in the keyboard and pen, making the real-world cost difference between the two devices a not insignificant $500.

That’s a big price gulf, so unless HP really dropped the ball with the Spectre x2, it seems like the obvious choice, right? After using the Spectre x2 for over a month, and comparing it directly with the new Surface Pro, I’m not so sure that it is.

The Spectre x2 looks like an obvious clone of the Surface Pro, but it has a more understated, business-like appearance. In place of the light gray frame and colorful, fabric-covered keyboards of the Surface, the x2 is a dark charcoal with a matching dark textured keyboard cover. The only pop in the design is the shiny coppery-gold HP logo and kickstand on the back.

At 1.68 pounds (2.49 pounds with the keyboard attached), and 7.7mm thick, the x2 is right in line with the size and weight of other computers in this class. It’s a very portable and light laptop replacement, but it’s still a bit heavy and unwieldy as a tablet. The kickstand is rigid and sturdy and the keyboard snaps to the bottom of the tablet in the same manner as Microsoft’s. This makes it no worse on the lap than the Surface Pro, but it’s no better either. HP’s kickstand design is a little better when pushed down to its full 165-degree range, and it is more stable to write on than Microsoft’s when using a pen on the screen.

The x2’s display is very similar in size, resolution, and shape to the Surface Pro’s. It’s a 12.3-inch, 3000 x 2000 pixel panel with a 3:2 aspect ratio and pixel density of 293 PPI. I love the squarer shape; it allows for more of a website or document to be displayed without scrolling compared to a wider, 16:9 display, and it’s easier to get work done on it as a result. The screen’s brightness (32 percent brighter than the prior model) and viewing angles are also excellent.

HP trimmed some of the bezel surrounding the display compared to the earlier x2, but it’s still large and I’d love to see it reduced further. I have the same complaint with the bezel on the Surface Pro and on similar computers from Samsung and others: once you get used to the lack of bezels on an Dell XPS 13 or other laptop, you want them on every computer you use.

On each side of the x2 is a USB Type-C port; there’s not even one on Microsoft’s computer. Neither jack supports Thunderbolt 3, but either one can be used for charging or outputting to an external display. The x2 lacks a standard-size USB port — the only other connection is a headphone jack in the upper left corner — so you’ll have to use adapters and dongles to connect most peripherals to it. (A USB C to A adapter does come in the box.) The lack of USB ports doesn’t surprise me too much — it’s definitely in line with 2017 laptop trends — but I wish they weren’t mounted so high up on the frame, which makes anything plugged into them hang from the side of the computer in an unsightly manner.

The x2’s keyboard is first class, but the trackpad is not

HP’s keyboard attachment for the x2 is first class: the backlit keys are well spaced and have good feedback when typing, and the textured backside feels durable and looks classy. I’m less impressed with the ultra-wide trackpad; it’s smooth and glassy, but performance is a bit erratic. It’s also not a Microsoft Precision trackpad, and consequently, does not support all of the multi-finger gestures that the Surface’s trackpad offers.

The Spectre’s included pen is not as nice or as well-specced as the Surface Pen, but I’m not an artist and it works just fine for jotting down quick notes. I just wish it had an eraser on the top as Microsoft’s pen does. There is a handy loop on the side of the keyboard to store the pen.

The Spectre x2 that I’ve been testing has a Core i7 processor, Intel’s Iris Plus graphics, 8GB of RAM, and a 320GB SSD for storage. You can get the x2 in a number of different configurations — some with lower specs, some with higher — but this model is the one that’s available in stores and will likely be the most popular. Those specs make the x2 a capable computer for day-to-day work in a browser, Microsoft’s Office suite, or other productivity apps. But the x2 isn’t a great computer for heavy lifting, and I was able to bring it to its knees on multiple occasions during video conferences or just in my daily workflow of using a lot of browser tabs and switching between a dozen open apps. It’s definitely not a computer I’d want to rely on for processing hundreds of RAW photos in Adobe Lightroom.

Likewise, even with the upgraded Iris Plus graphics, the x2 is not a gaming machine and won’t work well for anything but the lightest gaming needs. (Think Hearthstone rather than Overwatch.)

Loud fans are a constant companion

One of the biggest improvements Microsoft made with the latest Surface Pro was greatly reducing or, in the case of the Core i5 version, completely eliminating fan noise. Sadly, HP was not able to replicate this feat: like many of HP’s computers, the x2 has loud, obnoxious fans that spin up frequently and aggressively. Even with the fans spinning most of the time, the x2 also gets hot, which you don’t notice when it’s in laptop mode, but can be felt when you hold it like a tablet.

HP claims up to nine hours of battery life with the new Spectre x2, but in my experience, it typically lasts between five and six hours before giving up. That’s comparable to what the Surface Pro with a Core i7 achieves, and it doesn’t make the Spectre x2 an outlier in this class of computers. It’s just not as long as I’d like from an ultraportable laptop replacement. On the upside, HP does include a charger that restores up to 50 percent of the battery’s capacity in just 30 minutes, so it doesn’t take long to get back up and running.

At roughly $500 less than a comparably equipped Surface Pro, it’s hard not to like the Spectre x2. It provides most of the same performance and a very similar experience at a significant cost savings.

But it’s the little things that add up and frustrate me on the x2 that make me want to just pay for the Surface Pro. It’s the trackpad that isn’t as pleasant or efficient to use, the loud and annoying fans that always seem to be spinning, and the feeling that the x2 is just getting overwhelmed when I try to do more than a few things at once with it. Even though the Spectre x2 is considerably less expensive than the Surface Pro, it is by no means a cheap computer, and I wouldn’t put up with many of these issues on computers that cost half this much. And it’s not like HP can’t provide a great experience: the Spectre X360 laptop is one of the best on the market and one of my favorite computers I’ve tested over the past year.

But right now, the Spectre x2 is no Surface killer. 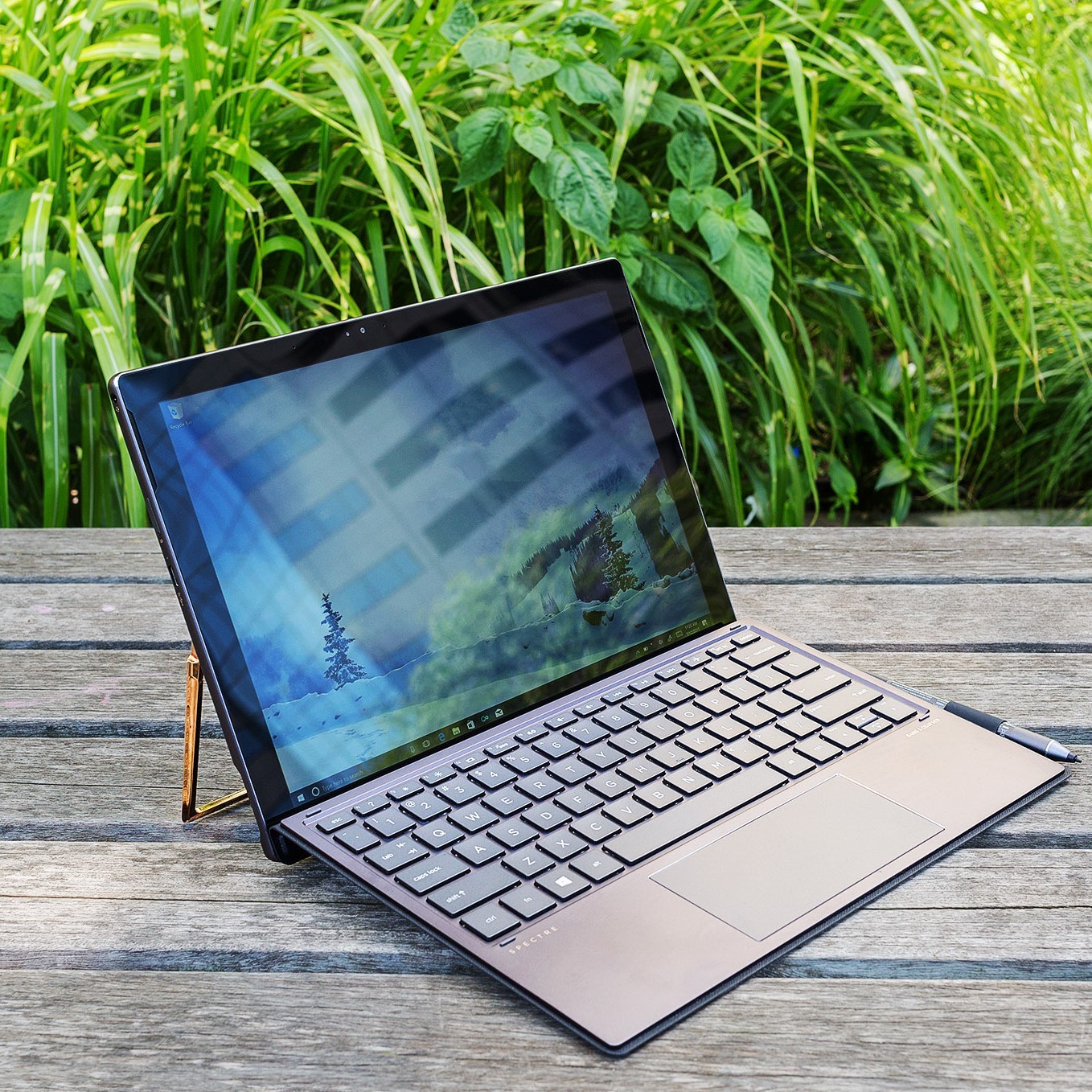