How long have I longed for a ThinkPad? Every time in my life that I’ve considered buying a laptop, the latest ThinkPad models have inevitably figured high on my list of desired computers. They once bore the IBM logo, now Lenovo, but they’ve always been that paradigm of no-nonsense work machine that you know you can rely on. Sturdy, hardy, and covered in deep matte black, ThinkPads are iconic.

But the reason I haven’t owned a series of ThinkPads over the past two decades is twofold: one part is that Apple’s MacBooks have been superior in battery life and user experience, while the other is that the proper ThinkPads have generally been out of reach financially. Lenovo has mostly been a good guardian of the ThinkPad brand, but it did misapply the label on its plasticky ThinkPad Edge laptops. I owned one of those and it definitely didn’t live up to the storied reputation of this portable PC.

These considerations have been turned on their head in 2017 with Lenovo’s fifth-generation ThinkPad X1 Carbon, which seems to be the beneficiary of a perfect confluence of events. Apple has made its MacBook line worse, not better; Lenovo has lowered the entry price to its legit ThinkPad range; and I’m once again on the hunt for a new laptop. With prices starting at just over $1,100, the X1 Carbon is a 14-inch no-nonsense work computer that’s easy to fall in love with, whether you’re coming from the Mac or Windows camp.

The model I’m reviewing is priced at $1,275 and comes with an Intel Core i5-7300U CPU, 8GB of RAM, and a worthwhile upgrade over the base X1 Carbon: a 256GB NVMe SSD. That storage drive is double the size and substantially faster than on the entry-level model, working over the PCI Express bus rather than the more typical SATA. For another $50 you can upgrade the 1080p display to 1440p, for $111 more you can double the memory, or for $120 you can double the storage again to 512GB. These are all reasonably priced upsells from Lenovo, subject to the company’s arcane “instant savings” mathematics, and I can see the attraction in all of them. But for my needs and preferences, the review unit was ample.

Lenovo has built this laptop to withstand the test of time

The thing that doesn’t change with any of the X1 Carbon variants is the build quality. I love it. There is no creaking to be heard or keyboard flex to be felt. The brutally minimalist black surfaces (this laptop’s also available in silver, but that’s a sacrilegious color for a ThinkPad) have a soft-touch finish that resists fingerprints and other blemishes admirably well. The hinges are a thing of metal beauty: they open out to a full 180 degrees and feel strong enough to hang a door on. The first laptop I ever bought was a Samsung X10, but its right hinge broke a month after the warranty expired. I still regret not getting the ThinkPad X series I was eyeing back then.

Also universal across X1 Carbon models is the keyboard. I love that, too. Each key is a vast island of loveliness, perfectly shaped and positioned to give me the best typing experience. For such a thin laptop as this ThinkPad is (15.95mm / 0.6 inches), the key travel is cavernously deep, which compares very favorably to Apple’s almost-flat MacBook and MacBook Pro keyboards and practically everything else in the same category. If I had to give you my reasons for why I continue to favor laptops over 2-in-1 hybrids, I’d point to this keyboard first and the X1 Carbon’s hinges second.

The traditional ThinkPad TrackPoint — the red nub in the middle — is present on the X1 Carbon and it works well. It’s a very alien experience for anyone habituated to the swiping and gesture controls of a touchpad or screen, but it will please old-school types, and it doesn’t get in the way of my millennial ways of using a PC either. It adds a couple of hard mouse buttons above the laptop’s trackpad, which I often use in combination with the trackpad. The trackpad itself is reliable and accurate, giving me no cause for complaint.

At 1.13kg / 2.49lbs, the ThinkPad X1 Carbon weighs exactly as much as the 2017 HP Spectre x2 with its keyboard attached. Which is to say that this ThinkPad is the same weight as the thin paper pad it resembles. I’ve only known the LG Gram to be a lighter computer with a 14-inch screen, but that was a flimsy plastic affair whereas this ThinkPad is perfectly rigid and reinforced with carbon fiber. Lenovo has protected the screen very well, too, and its newly trimmed-down bezels make the X1 Carbon’s footprint much more compact than before. I can envision no scenarios, other than an especially minimal bag or backpack, where a 12-inch or 13-inch laptop would present a meaningful advantage over this 14-inch Lenovo PC.

The one thing I miss from the Surface Pro, Spectre x2, and my trusty Chromebook Pixel is the 3:2 aspect ratio. With their squarer screens, those computers are more useful as work machines, displaying more of any given webpage or document without forcing me to scroll. Lenovo’s choice of 16:9 with the ThinkPad X1 Carbon is not controversial, but I do find it suboptimal. It would have made more sense on a computer designed to consume media and entertainment rather than one for composing spreadsheets and PowerPoint slides.

Some might also take issue with the X1 Carbon’s 1080p resolution, but I’m not among them. It’s perfectly adequate to give me a sharp picture, and I like that it’s more forgiving on the battery than the current trend for high-res displays everywhere. HP’s Spectre x2 might give you 6 megapixels of resolution, but it doesn’t last beyond six hours. This ThinkPad X1 Carbon gets me a solid eight hours of active use and is one of the rare new laptops (or laptop-replacement hybrids) this year that I can comfortably use for a whole day on a single charge. If I’m just writing and browsing the web, as I’m doing for this review, it stretches past the 10-hour mark. Lenovo’s charger is conveniently small, and it’s USB-C, so it charges my phone, too.

I have to return to the display, though, to commend Lenovo on being one of the rare few companies to still sell matte screens. I can use this laptop in a brightly lit environment without having glare, my reflection, or little speckles of dust distracting me. No, it’s not the most saturated or contrasty viewing experience you’ll ever get on a mobile computer, but then neither is a MacBook Pro or Surface Book when used for its intended purpose as a mobile computer. Those laptops get blighted by even the hint of any sunlight over your shoulder, whereas the ThinkPad maintains its legibility in unfavorable environments.

No touchscreen, no glossy high-resolution antics, just getting all the laptop fundamentals right

So the ThinkPad X1 Carbon is thin, light, reasonably affordable, built to last, and has a battery that actually lasts. It sounds almost perfect, right? It would be, if Windows was perfect. Back in April, I wrote about my three favorite apps that re-created basic macOS functionality in Windows. I still like them, but I no longer use them, because they turned out to be rather buggy and unreliable. The fact remains that macOS gives you a smoother user experience, even if it doesn’t last as long now that Apple has kneecapped the battery life of its laptop line. In macOS, I don’t have to uninstall Candy Crush Saga, reject the injection of ads into my Start menu, or ward off Cortana’s pushiness.

Basic things like compatibility with external audio gear (digital-to-analog converters or USB sound cards) are seamless with macOS, but require driver downloads and debugging on Windows. In Chrome on Windows, I can’t do a two-finger swipe gesture to move between pages. That’s debilitating to me and the way I work, and MacBooks in general make much better use of multitouch input than their Windows counterparts. I also never know what sort of sleep mode this ThinkPad will go into, with it often entering a deep hibernation that takes multiple seconds to exit.

I miss the ease and fluidity of operation of macOS (and even the banal simplicity of being able to type out an em dash instead of copying and pasting it every time), and for that reason I can’t endorse the ThinkPad X1 Carbon as the best laptop user experience available today. Though it comes very close.

Performance is consistent and reliable

Compared to other Windows laptops, I feel no sense of loss for lacking a touchscreen, a stylus, or a high-resolution display that covers 120 percent of three different RGB color spaces. Hardware specs are not a shortcoming for this laptop, and its performance over the months I’ve tested it has been satisfyingly quick and responsive. I have done some casual work in Photoshop without feeling in any way slowed by the Core i5 processor, and I’d credit the fast storage for helping to keep everything moving. I can’t even recall what this laptop’s fan sounds like, because it almost never has to kick in — and if you don’t try to edit 4K video or a batch of 50MB RAW files in Lightroom, you might never hear it either — which wasn’t always the case, so I’m guessing Lenovo has improved its software over time.

The X1 Carbon has a few other niceties, including a fingerprint sensor for Windows Hello authentication. It’s a little slow, but Lenovo tells me it’s extremely secure because it employs match-in-sensor verification that fully encapsulates the ID process and information, insulating them from any potential hacking of the laptop itself. It’s a good business-friendly touch, and so is the inclusion of two classic USB-A ports alongside the two USB-C / Thunderbolt 3 / charging jacks and one full-size HDMI port.

I’d love to see Lenovo go all the way with user-friendly features and include an SD card slot, but the company compromises with microSD instead. Can’t complain about this anymore, however, as the SD card slot has gone the way of the dodo and the DVD drive this year. Another thing that would have made this laptop more enjoyable for me is better headphone audio hardware: the sound coming out of the X1 Carbon’s speakers is perfectly fine for its class, but the headphone output is horribly dull and unimpressive.

The ThinkPad X1 Carbon is Lenovo’s version of a crossover SUV. It’s got the larger screen, durable build, and spartan looks of a business machine. But it’s also slim, light, and, in some beholders’ eyes, handsome. This is a computer designed to serve almost all laptop purposes, and the surprising thing about it is how well and how often it succeeds. Lenovo’s design choices are overwhelmingly correct, and what I see with this PC is the refinement and approaching perfection of the clamshell computer.

To satisfy your mobile computing needs, you can now pick among iPads, Chromebooks, and 2-in-1 Windows devices next to the traditional macOS and Windows laptops. That’s a choice you’ll have to weigh before considering Lenovo’s ThinkPad X1 Carbon. For me, the delights of this laptop’s keyboard and the absolute peace of mind that comes with its hardy construction are an unbeatable combination. With good battery life and an enduring commitment to austere matte surfaces, the ThinkPad X1 Carbon is the sort of no-nonsense ThinkPad I’ve always wanted. 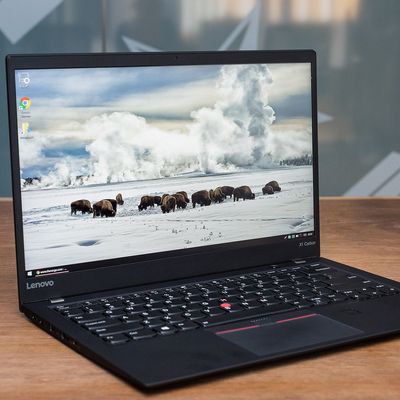