The S Pen doesn’t make this laptop great, but it doesn’t get in the way, either

When it comes to the Notebook 9 Pro, Samsung thinks sharing is caring. Available in both 13 and 15-inch versions, they’re equipped with most of the same core specs. That means Core i7 processors, up to 16GB of RAM, 128 / 256 / 512GB SSD storage options, and HDR-supporting 1080p LED panels. Internally, the only exclusive spec is for the 15-inch version, in the form of a low-end Radeon 540 discrete graphics chip. The 13-inch model starts at $949, while the 15-inch version tested costs $1,299.

But here’s the kicker on why Samsung is adding the “Pro” moniker: both laptops come with an S Pen, laden with both Windows Ink and Samsung’s Air Command. In some way, it’s an extension of Samsung’s family, with long-time Galaxy Note users being all too familiar with the ways of their new laptop’s stylus. It also speaks to the trend with Windows laptops this year: almost everywhere you look, pen support is getting added. Windows 10 has also gotten a number of updates to better support pens this year, most notably with the Creator’s Update that arrived this spring.

New Samsung customers never exposed to the S Pen will have the option of a revered input tool. According to Samsung, this particular version of the S Pen is the same seen on the Note 8 — 0.7mm tip, 4,096 levels of pressure sensitivity — with the only difference being a unique plastic casing used to fit the Notebook 9’s chassis and curvature.

At first, knowing I had the S Pen within a Windows machine didn’t drastically change the way I went about using the Notebook 9 Pro. Maybe it’s due to the traditional clamshell design and its large size (I’ve been testing the 15-inch model), which doesn’t instill a “tablet-first” usage style. What I personally found great about the S Pen is how unremarkable it is; docile, passive even. There’s no need to charge it, but it still works well for precision tasks — signing documents, editing photos in Lightroom or Photoshop, and doodling in Paint3D.

Completing basic productivity tasks would have been easy with just the Microsoft Precision touchpad. It’s fairly-sized, accurate and comfortable to use. However, having the S Pen always at your disposal makes using the Notebook 9 Pro feel just a tad more intuitive than all the other clamshell computers at the coffee shop.

Also, if you’re wondering where the S Pen lives: it’s inside of one-way slot, near the front lip of the laptop. It takes a few tries to slide it out in one motion, but soon you get used to it and thus get better at finding it. It’s a much better solution to storing the pen than most other laptop makers have offered, which usually consists of fabric loops or weak magnets that frequently don’t work. The S Pen becomes part of the machine, instead of just an accessory.

But beyond the smart storage system, the S Pen’s novelty is thin. The S Pen becomes “just another Windows Ink stylus” — albeit probably one of the better ones — and I go back to using touchpad and keyboard.

By comparing the Notebook 9 Pro’s keyboard and touchpad to two other laptops of the same size, I’ve been able to appreciate just how good they are. Travel isn’t shallow — like the Macbook Pro 15-inch — instead it has a soft but tactile feel. Individual keys are slightly rounded, with good build quality with little to no flex — whereas the keys on HP’s Spectre x360 15-inch had less feedback with more flex. Meanwhile, the Precision touchpad driver continues to be the best that Windows has. Input is precise and the touchpad is roomy, but not nearly as roomy as the Macbook’s.

Not everything about the Notebook 9 Pro’s hardware is rosy, however. For one, there are no front-facing speakers, since they’re both mounted underneath. The result is audio that feels distant, lacking vibrancy despite producing solid mids and a pinch of bass.

Cooling management is also a noticeable fault. The Pro will start heating up during a video or a few tasks running the background, keeping your lap warm and toasty — it shouldn’t be.

However, there’s only one thing that really grinds my gears with the Notebook 9 Pro. It’s the location of the power button. It’s on the right-hand side, right next to the microSD card slot. It sounds harmless, but in practice it’s fairly sensitive — it’s sloppy. Not only that, but the button protrudes from the side. It doesn’t take a reviewer to quickly realize you will be accidentally putting the Pro to sleep almost as often as you pick it up.

Also, far less of an issue but one related to its industrial design: the two-tone grey is unsightly. My opinion is by matching the darker hue of the palm rest with the exterior, the laptop would appear to be as “pro” as its name suggests. Right now, it looks like nearly every other laptop in Samsung’s lineup.

Samsung knows that many of the higher-end Windows laptops begin to converge on features, functionality, and even materials. Windows machines with touchscreens and styluses are more commonplace than ever, so what has Samsung done to differentiate itself? Besides the S Pen, it’s using the double-edged sword of bundled software. Added functionality at the cost of cleanliness.

For some, included apps like McAfee, Quick Settings app (also the F1 key) and SideSync to name a few, could be useful additions. But most people will find little use for them.

Of all the bundled software, only the Quick Settings app was worth being added to my taskbar. Within the app, you can control everything from the color tone of the display, high performance mode, video HDR, auto booting when you open the lid, USB charging and even a “silent mode”; masking the Notebook 9 Pro as a fanless, power-conscious laptop. It’s a bit like an extended version of the options available in Windows 10’s own Action Center.

Other features within the Quick Settings app are more gimmicks than anything else. For example, the digital privacy filter and “block camera recording” features. Let me explain.

A screen privacy filter is usually a physical feature or add-on, sometimes paired with clever software (see: HP’s Elitebook x360). But on the Notebook 9 Pro, there’s no physical privacy filter — it’s all software-based. Samsung only allows you to increase / decrease the opacity of windows by adding an opaque black layer over the display, making it impossible for even you to see what’s on-screen. I’d say try again, Samsung — this is certainly a feature users would appreciate, but right now it doesn’t really work.

Meanwhile, the camera blocking functionality is disabled (read: doesn’t work) if Windows Hello is enabled. This renders it the whole feature meaningless, since you’re exchanging one supposed form of security for another (and making logging into your computer more cumbersome in the process).

On the discussion of battery life, it’s unremarkable. I’ve pulled through seven to eight hours of moderate usage that includes multiple Chrome tabs, a lengthy Lightroom session, and 80 percent display brightness, with Bluetooth and keyboard backlighting on. Heavier usage may land you at the six hour mark, which isn’t stellar but not abysmal either.

Also, despite the use of a proprietary charging port, the USB-C port on the Notebook 9 Pro is capable to receiving charge from a battery pack or power outlet. So there are two ways to charge the Notebook 9 Pro, which is handy.

Solid power for good value always gains points in my book. Despite the compromises in audio, button placement, screen resolution and weight (4.8 pounds), the Notebook 9 Pro has a niche it can fill, even if that niche is as small as the S Pen.

The Notebook 9 Pro is for the user who wants a large screened Windows laptop, with the added benefits of an S Pen and plenty of power for your dollar. If you’re a fan of the Galaxy Note smartphone, it’s even better.

The added utility of a pen in a laptop doesn’t make using it worlds better, but in the case of the Notebook 9 Pro, it doesn’t take away from it either. 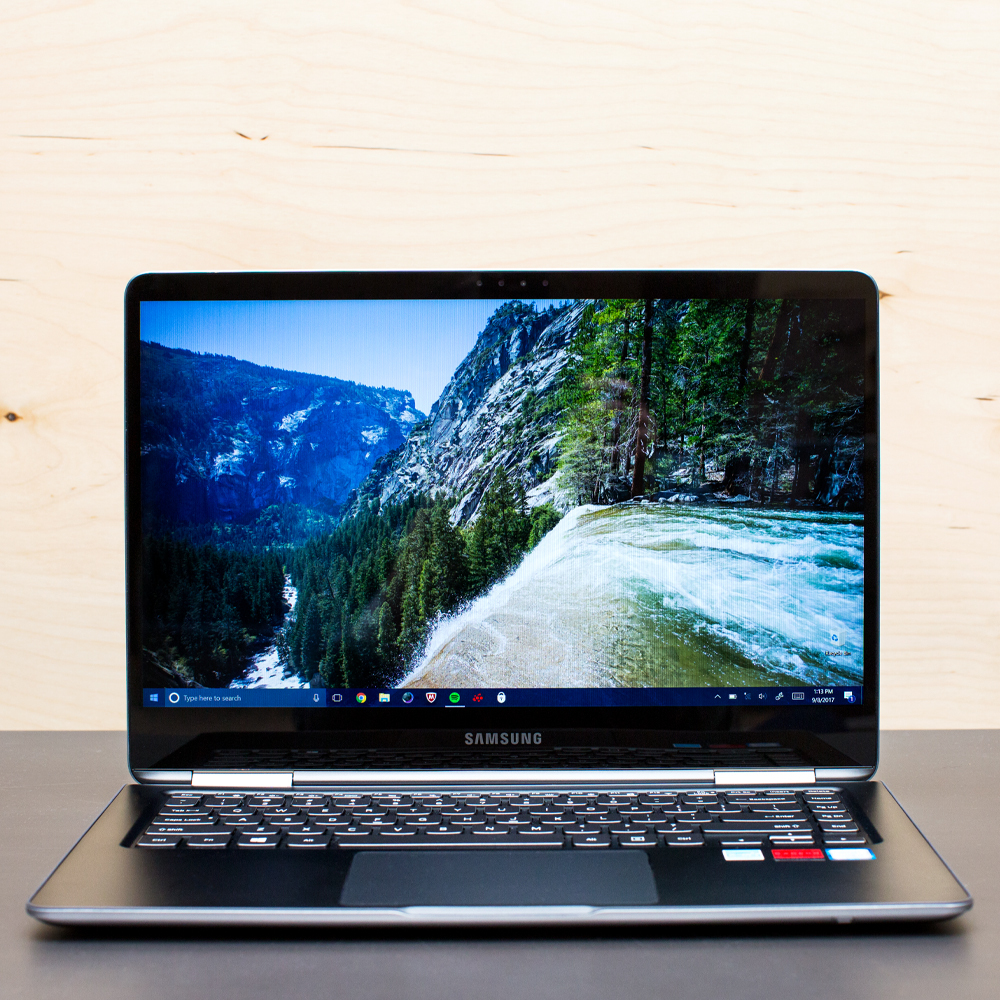