Sonos contender or just a pretender?

Late last year, B&O Play announced the Beoplay M3, an addition to its home wireless speaker lineup that’s more approachable in both size and price compared to the Beoplay M5. In fact, the $299.95 M3 is the least expensive home speaker in B&O Play’s portfolio, and appears to be specifically targeted to the person looking at a Sonos system for their home. I was intrigued: could this be the long-awaited Sonos alternative?

My go-to recommendation for a wireless home speaker over the past couple of years has been Sonos’ excellent Play:1, and later, its replacement, the new Sonos One. The Sonos products combine an accessible price with great sound quality, rock solid wireless performance, and compatibility with virtually any streaming music service you might use. They also grant you entry into the Sonos platform, which easily handles expansion across multiple rooms and larger speakers. There have been other options in this space, but none have quite been able to match Sonos in terms of usability and quality.

The Beoplay M3 might be the strongest contender yet. It has a number of good things going for it, including easy setup, loud output, and stylish design. It’s also compatible with Apple AirPlay, Google Cast, and Bluetooth connections, so if there’s something you want to play through it, you probably can. But, unfortunately, nothing about the M3 justifies its significant cost premium over the Sonos, and in a number of important ways, the Sonos provides the better experience.

B&O Play products, whether they are speakers or headphones, tend to have good audio quality that’s pleasing to almost anyone that might listen to them. The M3 is no exception: it’s a loud little speaker that punches above its size class. Much like the similarly-sized Sonos One, the M3 has one 0.75-inch tweeter and one 3.75-inch woofer, each driven by their own 40-watt Class D amplifier. The M3 can easily fill a room with sound, yet is small enough to hide away on a kitchen counter, in a corner of your living room, or even on your nightstand.

The M3 can easily fill a room with sound, yet is small enough to hide away on a kitchen counter

The other defining characteristic of B&O Play products is that you’re likely to pay a price premium for their design and aesthetics. This is often something I feel is worth ponying up for — the H9i headphones are a gorgeous piece of kit that aren’t matched by lesser headphones. But the M3’s design is a little too plain to warrant its premium, and in the case of my black review unit, it’s downright boring. An all-black Sonos One has a sleek stealthy vibe that the M3 doesn’t pull off. But if you’re looking for something dark to hide in a bookshelf, it can do the trick.

Unlike, the M5, the M3 is a directional speaker, and doesn’t radiate sound in all directions — it just points forward. But it’s not so directional that moving around the room causes the sound to dramatically change, you can basically plop it on a shelf and hear quality music from anywhere you sit.

At medium volumes, the M3 has a warm, rich sound that belies its fully digital system and might even convince you that you’re listening to an older analog sound system. Unsurprisingly, the M3 doesn’t provide chest-thumping bass (as opposed to the larger Beoplay M5, which has no problem putting out a ton of bass), but it does reproduce low-end sounds that you aren’t likely to hear on a less expensive speaker.

At full volume, the M3 can almost be uncomfortable to listen to, especially if you’re in a small room. It does not distort or break up no matter how hard you crank it. It does, however, have an audible hiss that’s really hard to ignore once you hear it.

The M3 sounds best in the middle of its volume range, which may still be too loud for many people

And at low volumes the sound can be overwhelmed by the bass. This makes the M3 less than ideal for podcasts or other vocal-dominant audio sources. It’s clear that the M3 performs its best in the middle of its volume range, from about 30 percent up to 70 percent, but many people might find even that to be too loud for prolonged listening or when you just want something on in the background.

For comparison, the Sonos One, and its predecessor, the Play:1, do not have these issues — they’re easy to listen to at low volumes and when the knob is cranked up to 11.

The M3 is primarily a wireless speaker, but you can plug a wired audio source into the 3.5mm input hidden on the speaker’s underside. For wirelessly controlling the speaker, you can use Apple AirPlay, Google Cast, or Bluetooth, allowing you to basically play any kind of audio from your mobile device on the M3. The only thing lacking is Spotify Connect, which means that it’s difficult to use a Windows PC to send Spotify audio to the M3 without directly pairing it over Bluetooth. (Spotify’s mobile apps support the Google Cast protocol, so it works just fine on an iOS or Android phone or tablet.)

You can use the Beoplay mobile app to set up the speaker on your Wi-Fi network and configure it into a multiroom setup with other Beoplay speakers, but it’s not possible to pair two M3 speakers in a stereo configuration like you can do with Sonos speakers. Beoplay’s multiroom options appear to be quite limited, but as I only had one M3 to test, I was unable to put them through their paces.

The app also lets you configure the speaker’s tuning based on its placement (free standing, in a corner, or against a wall), but I didn’t notice much of a difference between the settings. There is also Beoplay’s ToneTouch feature, which eschews a traditional equalizer control for a four-zone system that lets you bias the speaker towards “Warm,” “Excited,” “Relaxed,” or “Bright” sound profiles. The differences between the profiles are subtle, as are the presets for Party, Podcast, Lounge, and Clear. I’d suspect most people buying the M3 will never bother to mess with these settings and they will be no worse off if they don’t.

The big, obvious thing that the M3 is lacking is any sort of integrated voice control. This isn’t a speaker you can ask to play a specific song, album, artist, or playlist, nor can you tell it to raise or lower the volume with your voice. I was also unable to get a Google Home to play music through the M3, even though it is a Cast-enabled device. All of your interactions are through your mobile phone or a small volume rocker on the back of the speaker that appears to be purposefully hidden away.

That puts the M3 at a significant disadvantage compared to the Sonos One, which has built-in microphones and can hear voice commands for playing music, adjusting volume, or accessing Amazon’s Alexa voice assistant (with Google Assistant promised to come in the near future).

Despite its pleasing sound signature, ample volume, and attractive design, it’s tough to recommend the Beoplay M3 over the Sonos One, which costs $100 less and has better multiroom support (including stereo pairing options), better audio quality no matter what volume you play it at, and a built-in voice assistant. That means the M3 is much like other B&O Play products in another important respect: you’re paying a hefty price premium for its design. Which, in this case, isn’t worth it.

Our review of Bang & Olufsen M3 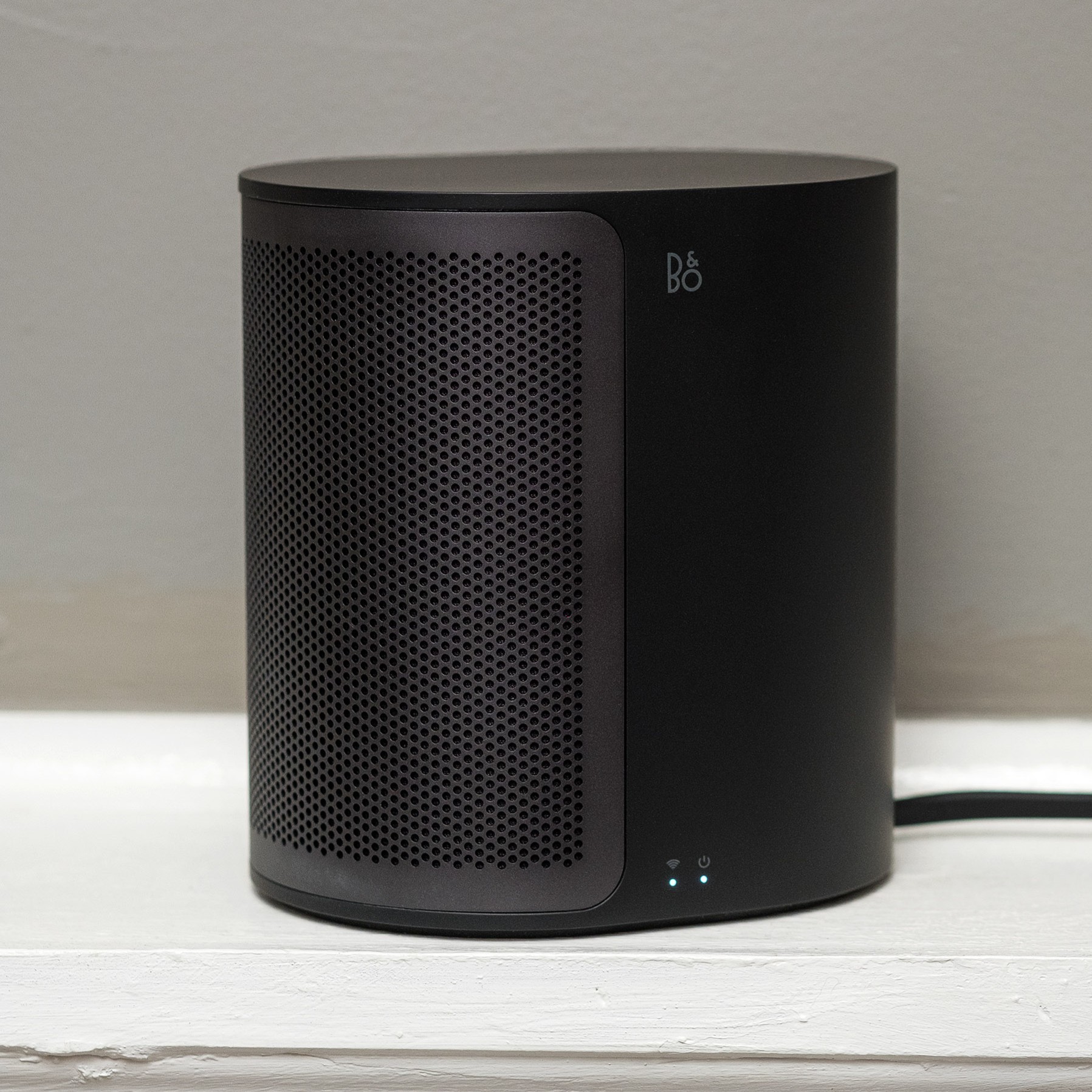