The best display technology comes at a (high) price

By Stefan Etienne@StefanEtienne Oct 1, 2018, 9:00am EDT
Photography by Amelia Holowaty Krales / The Verge

The Acer Predator X27 is one of the first monitors that supports both high, 4K resolutions and ultra fast frame rates. It has HDR with a wide color gamut, Nvidia’s G-Sync to prevent screen tearing, an overclocked 144Hz rate to keep fast-paced visuals smooth, and costs a staggering $1,999. Cleary, it’s not a budget monitor. For PC gamers, this could be the dream display, but it requires more power and money than most would care for.

Still, despite its high cost and extreme power demands, the Acer Predator X27 is a glimpse at a virtual world that is crisper, brighter, and more fluid than anything you might’ve seen before.

Our review of Acer Predator X27 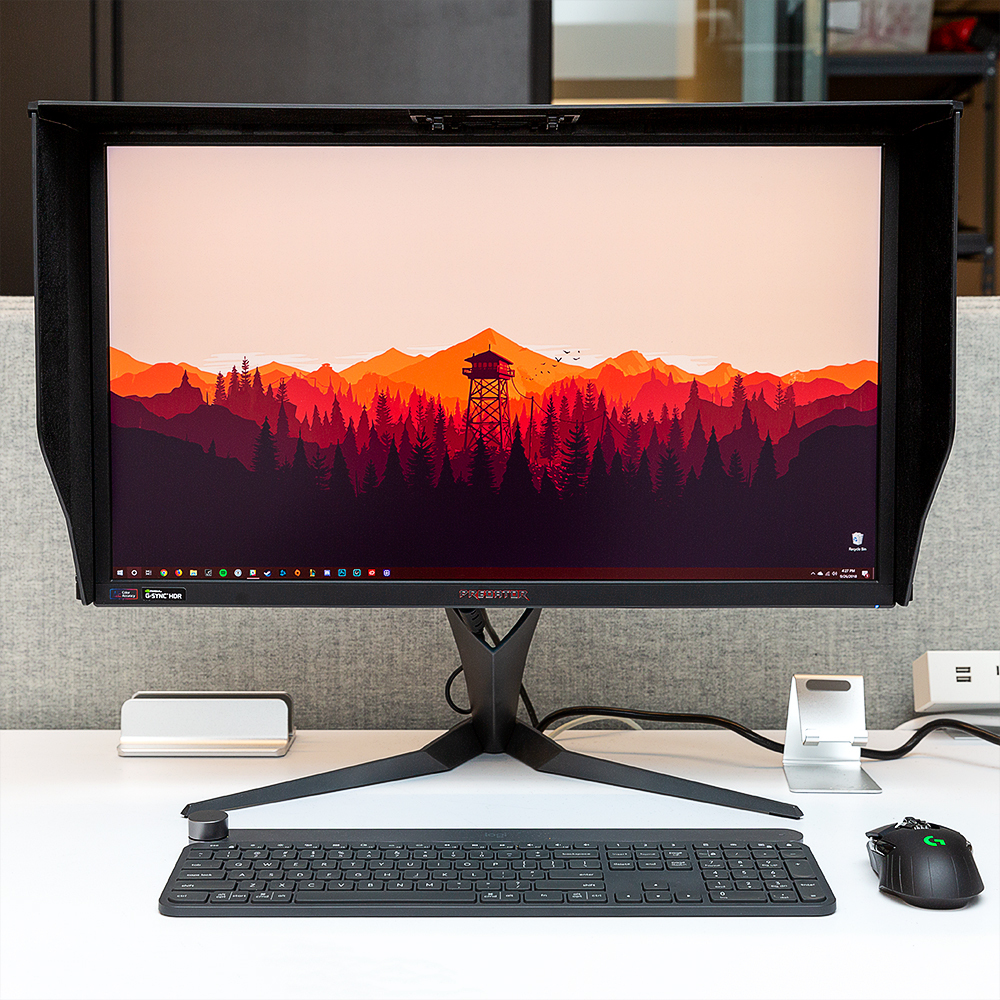 Gaming on the Predator X27 is the most visually satisfying gameplay experience I’ve had in a long time. Colors pops, textures have increased detail, animations are smooth because of the high refresh rate, and HDR is a handy feature if your content supports it. With the hood removed, some games on the X27 look crisp enough to be real; it’s a great experience.

This cements the X27 as an ideal gaming monitor. Having 4K can be considered preparing for future content; having G-Sync to control screen tearing with HDR10 support are both just added sweetener.

Getting X27 to working at full speed takes some setting up, however. Out of the box, Acer’s default settings have both HDR and the 144Hz refresh rate disabled. To actually enable the full 144Hz refresh rate, you first need to use the OSD (on-screen display) to “overclock” the display panel to 144Hz, then navigate to your Nvidia Control Panel, where the new refresh rate option should appear as a selection.

Navigating the OSD consists of using four buttons plus a clickable red joystick on the back of the monitor. It’s far from being the most intuitive OSD, but it offers deep customization on everything from brightness in nits to color temperature and contrast.

Acer claims that in some PCs, overclocking the display may cause instability, but I had no problems overclocking the monitor to work with the latest and greatest Founders Edition RTX 2080Ti graphics card from Nvidia.

Lots of buttons and USB 3.0 ports

Similarly, if you want to enable HDR you’ll have to navigate to Windows Settings, search for “HDR,” and select “HDR and WCG (wide color gamut). For some reason, this doesn’t enable HDR in Chrome; to do so you’ll have to pay a visit to “chrome://flags” and enable the experimental feature. Once you’ve set everything up, the screen will flicker a few times, but once the dust settles you’ll be using the Predator X27 as intended.

While the Predator X27 has 99 percent AdobeRGB coverage, 100 percent sRGB coverage, and comes with a monitor hood, it’s still not meant to be a designer monitor. Having accurate color representation in a $2,000 monitor sounds like a no-brainer and maybe even the bare minimum, so it’s just another welcomed bonus to the package.

However, as much as 4K is an intriguing and beautiful resolution for consuming content, it’s also a luxury and expensive to assemble. As we found out in our RTX 2080 / 2080Ti review, maintaining 60 frames per second in modern titles is only viable with the highest-end, $1,199 RTX 2080Ti card. Under no circumstances could I ever play Shadow of the Tomb Raider, PUBG, or Far Cry 5 at ultra settings, in HDR, and at 144 frames per second — the power to keep up just isn’t there. Consequently, even if you made peace with the Predator X27’s $2,000 price tag, you’d still need a cutting-edge, full-power gaming rig with the capability to drive it, further driving up your costs.

Like many gaming-focused displays, the Acer Predator X27 isn’t a simple-looking, 27-inch monitor. Looking around you’ll come across a dynamic lighting setup (rear and downward-facing), a stand with height adjustment, the optional window hood, and five USB 3.0 ports. It’s definitely got some garish gaming hardware design going on, but it’s far from an ugly-looking monitor. After all, you’re mostly looking at the screen and not the rear.

During my time using the Predator X27, I came across a few HDR-specific bugs. When HDR is enabled and the computer wakes from standby (or randomly when playing Far Cry 5), occasionally the display will look washed-out and gray. This bug also changes the monitor’s default settings, which is annoying if you’ve just gone through all the work of setting up HDR and the overclocked refresh rate. I’ve found the quickest and easiest fix is to disable / re-enable HDR in Windows 10, but when this method falls, my only option is to reset the monitor via the OSD and completely start over.

Other publications have come across similar issues with HDR and I’ve shared my observations with Nvidia, but have no permanent fix in the meantime. I wouldn’t say this is a deal-breaker — even if it happened three times in one week — but it is an issue to be aware of when investing in a monitor like this.

Ultimately, if you want a 4K monitor in 2018 and have a graphics card that can deliver a refresh rate above 60Hz, buy a 4K / 60Hz monitor! It’s the more sensible option. If you can’t reach the goal of 144Hz, at least you’d be able to secure a more-than-decent 60 fps gaming experience for far less money. Asus, Dell, BenQ, and yes, even Acer sell 4K / 60Hz monitors for under $800, so you can experience 4K without entirely draining your savings.

On the other hand, if having one of the best 27-inch monitors that money can buy is your goal, then splurge on the Predator X27. Most people are probably better off waiting for prices to drop on both the monitor and the graphics cards necessary to push these resolutions and frame rates to their full potential, however.