After intensifying overnight, Hurricane Michael is now pummeling the Florida Panhandle as a Category 4 storm — the strongest hurricane on record to ever strike the region. Hundreds of thousands of people have been ordered to evacuate as Michael’s winds top speeds of 155 miles per hour, NBC News reports.

Storm surge is expected to bring flood waters reaching 14 feet high — and the Panhandle is already experiencing “life threatening storm surge, hurricane force winds, and heavy rainfall,” the National Hurricane Center says. For those who stayed put, it’s time to seek shelter out of the way of waves and wind, Florida Governor Rick Scott warned on Twitter: “The time for evacuating along the coast has come and gone.”

An extreme wind warning is currently in effect for locations between Laguna Beach and Eastpoint until 2:15PM ET. Wind gusts in excess of 130 mph are expected. Shelter in place IMMEDIATELY! #HurricaneMichael pic.twitter.com/jogpNWMwTv

The storm is unusually strong because of a few things: warm water in the Gulf, favorable wind conditions, and humidity. “Those are the perfect ingredients for a storm like this to really blossom,” says Marshall Shepherd, director of the University of Georgia’s atmospheric sciences program and former president of the American Meteorological Society.

The storm intensified as it made landfall, the National Hurricane Center says — although it’s expected to weaken as it crosses over land. And after Hurricane Michael hits, Shepherd doubts we’ll see a hurricane with the same name again. “It’s a life-altering, society-altering situation,” he says. “Storms of this magnitude and impact, the name is typically retired. And I fully expect this to be the case for Michael.”

The Verge spoke with Shepherd about Hurricane Michael’s unprecedented strength.

This interview has been edited for clarity and brevity.

How did Hurricane Michael get so strong?

Overnight it’s really blossomed into a Category 4, and the primary reasons are that it was moving into very warm water, which is somewhat unusual for this late in October. It moved into a very favorable upper wind situation where there was not very much wind shear, and there’s a lot of moisture in the eastern United States out ahead of a cold front that’s coming from the west.

When Michael was further south, it was in a very difficult wind shear environment. As you know, hurricanes don’t like wind shear — when the winds change direction or speed as you go up in altitude. One of the things that’s really interesting about Hurricane Michael is that it was very resilient. It was actually still intensifying even in an environment with a lot of wind shear, which was odd. So I knew once it got into an environment with less wind shear and over warm Gulf waters, the thing was going to just explode — and that’s what we’re seeing.

From space, satellites from @NASAEarth + @NOAA see #HurricaneMichael as a major hurricane in the Gulf of Mexico.

Is there anything else that can explain how Michael intensified so rapidly?

We’ve been seeing these hot towers — these tall thunderstorms that form in the eyewall of the hurricane. I’ve been talking about these since my days as a scientist at NASA, because there are studies that show that when you have these hot towers, they’re more likely to indicate that the storm will go through a rapid intensification phase because they’re releasing so much heat that all that water vapor is condensing into cloud water in the storm.

When water vapor condenses to form cloud water, it releases this burst of heat called latent heat — that’s really the fuel supply for these hurricane heat engines. When you have these hot towers, they’re like the supercharged pistons in the engine, if you will. You’ve got this ample warm water, you’ve got not a lot of wind shear overnight when the storm really intensified, so you can have a very efficient engine where all this water vapor is being converted to energy.

What sort of hazards can we expect from the hurricane?

If it stays at this intensity, and there’s evidence that it’s even still intensifying at this moment, this is going to be the strongest storm, at least on record, to ever hit this part of Florida. I think a lot of times we can overemphasize, or over play, the wind threat in a hurricane. I don’t think that’s the case with this one. There’s going to be significant wind impacts, not only at the landfall point and around the Panhandle of Florida because the storm is so large, it’s so strong. And because of the pace that it’s moving, even inland in parts of Alabama and Georgia there are going to be hurricane strength winds. So the winds are going to be a significant impact.

The storm surge could be record-breaking in the coastal regions to the right of the storm. We could be seeing record eight to 13, perhaps more, feet of storm surge. [We] can’t downplay the rain. It’s not going to be a situation like Harvey and Florence where the thing stalls out and dumps three or four feet of rain. But there still could be half a foot to a foot of rainfall. And then, of course, to the right of the storm as it moves into Georgia and the Carolinas, you’ll get the tornado threats, too. It’s a horrible situation. 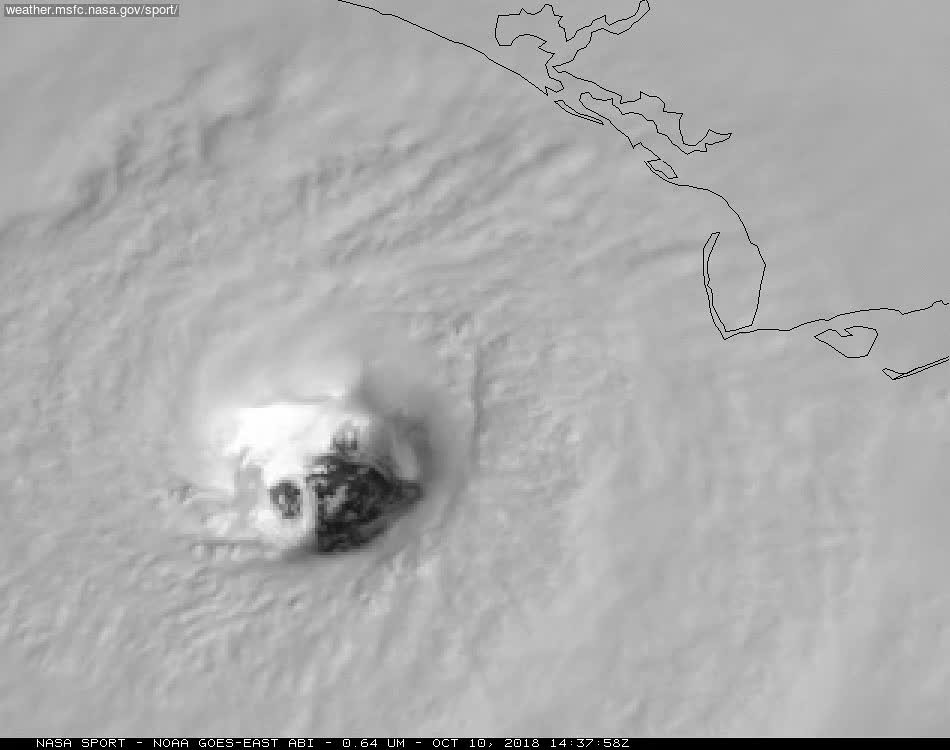 Is it late in the year to be seeing a hurricane in the Gulf? I thought we were past the peak of hurricane season.

Keep in mind with water, it takes several months for the transition from cold to warm and warm to cold. Even though air temperatures are starting to cool down, the heat characteristics of water means that the water has residual warmth for a while. That’s why the peak of the hurricane season is typically in September even though the actual hurricane season starts in June. So there’s this lag.

So the waters are gradually starting to cool down from that peak in September, but they’re still typically warm enough to support hurricanes. We get hurricanes all of the time in October, that’s not unprecedented. And frankly when we do get October hurricanes, they form exactly where Michael formed, which is down in the southern Caribbean and moving into the Gulf. This is exactly what we expect from an October hurricane. I’m just cautioning that there is nothing particularly unique about a hurricane in October that takes this particular track. But yes, it certainly is interesting that it has tapped into enough warm water to explosively develop.

How is climate change contributing to Hurricane Michael’s intensification?

Storms like this are undoubtedly pushing more water into the coast because sea levels are higher. So when we have these types of storms and storm surge, the storm will be pushing a higher level of water than it would 50 or 70 years ago. That is something that I’m very comfortable saying, but I think only the studies over time will play out whether the warmer oceans — because of our broader, background climate change — are fueling more higher-octane storms.

Physically, we understand that that should be the case, I want to clarify that. We understand from a scientific standpoint that a warming climate is causing warmer oceans, and you would think from a physics understanding of how these storms work that would lead to more intense storms. Whether I can say conclusively that that’s why this particular storm is more intense, I just think it would be irresponsible for me to speculate on that. 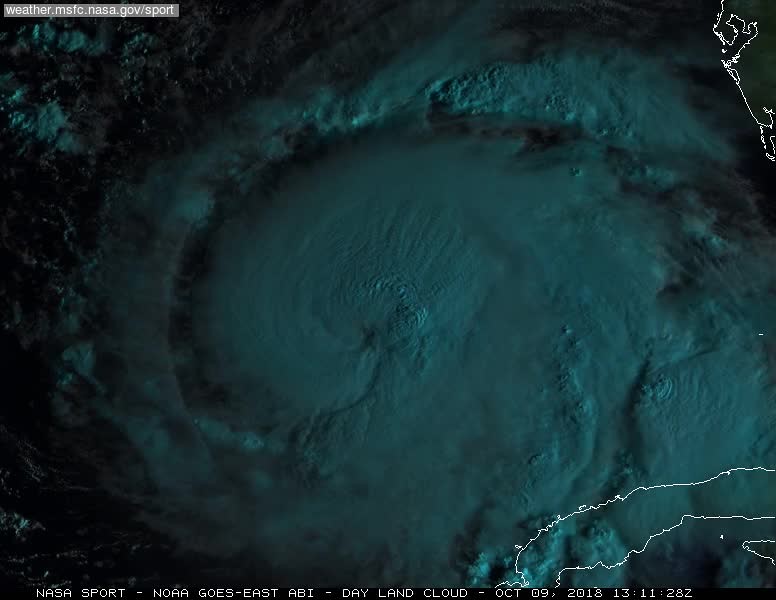 What’s your advice to people in the area?

It’s almost too late if you’re in Florida to do anything. People should have been gone a day or two ago. If they stayed in, all we can do is pray and hope that they’re okay. As the storm moves further inland, I am concerned that people further inland in my state of Georgia, for example, may not be really aware of the fact that they’re going to experience strong tropical storm to weak hurricane force winds in some parts well inland. I think that might catch a few people off guard. So hopefully they’re prepared for long power outages, perhaps trees falling down on their homes or in their yards. And for Georgia, I’m even worried about crop damage. That part of Georgia is a very agriculturally intense region of our state. It’s harvest time for some crops, so I even worry about that.

How fast are we expecting this storm to move through the region?

This storm is going to move quickly, which won’t mean four feet of rain like we saw in Florence or Harvey. But the downside of a quick-moving storm is that places further inland still feel the impact of a pretty powerful punch from the hurricane, because it takes a while to weaken. This is a very different storm than a Florence and a Harvey, but it carries its own unique threats because of the fact that places inland will see hurricane force winds or strong tropical storm force winds.

Update 2:15PM ET: Updated to include the latest Hurricane Michael stats from the National Hurricane Center.