The Charge 3 won’t make working out easier, but it will make it easier to track workouts

Is there a place for a dedicated fitness tracker in a world full of more powerful and feature-packed smartwatches?

That’s the question facing the newly released Fitbit Charge 3, the latest update to Fitbit’s flagship fitness tracker, coming two years after its predecessor — the Charge 2 — came out. But the wearable market has changed a lot in two years: Apple has seen a resurgence from the once confused branding of the Apple Watch into a more focused, fitness device; Pebble has vanished (and been bought by Fitbit); Android Wear has seemingly turned into a footnote on the industry; and even Fitbit has gotten into the smartwatch game with the Ionic and Versa. Faced with that kind of competition, can the comparably humble fitness tracking features of the Charge 3 survive?

Our review of Fitbit Charge 3 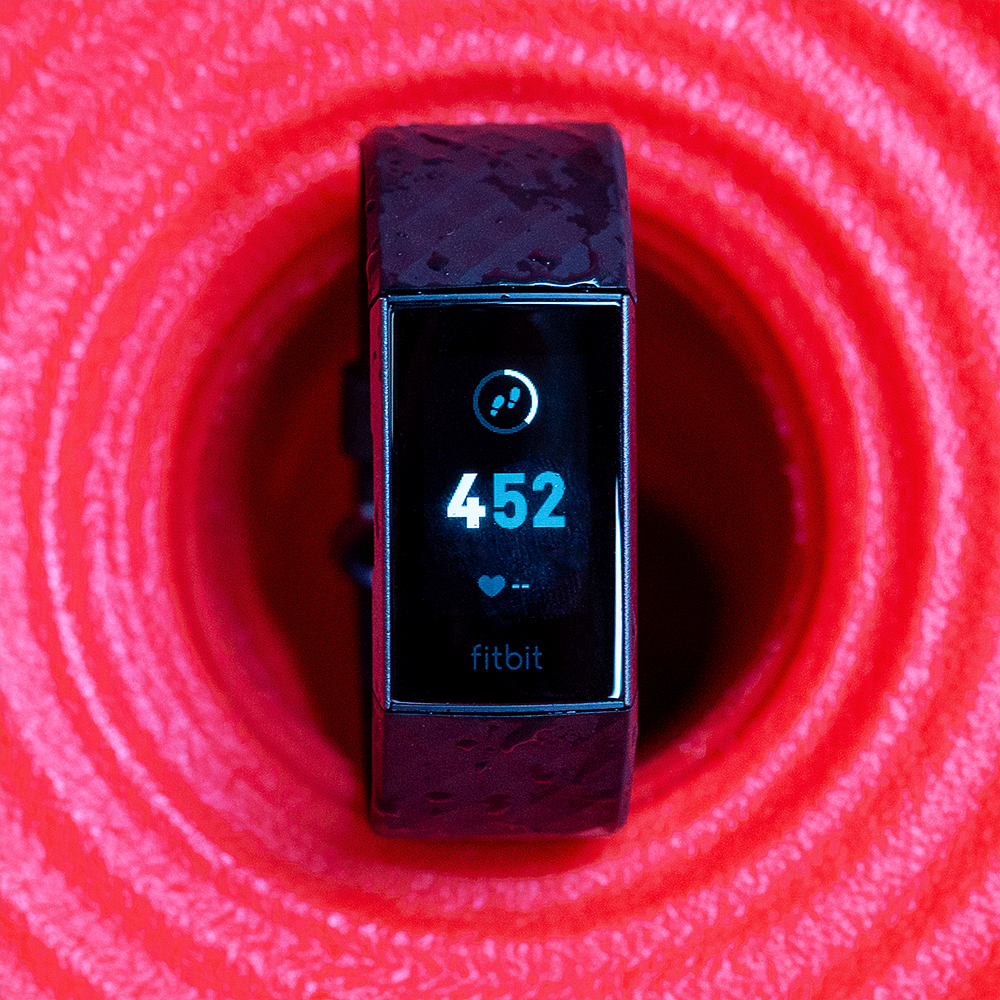 At a distance, the $149.99 Charge 3 looks similar to the Charge 2; it’s not quite the same drastic overhaul between the Charge HR and the Charge 2. But look closer and you’ll see that Fitbit has done some serious redesign work on the Charge 3. It’s far less blocky and is flatter than the previous generation, with a subtly curved display and slightly tapered sides compared to the more rectangular Charge 2. Like the Versa, the bands angle down off the watch instead of out to the side for a more comfortable fit — but unlike the Versa, the bands have a new, quick-release system that makes it very easy to swap them out.

Fitbit promises seven days of battery life — and it holds up

Light up the display, though, and changes are far more apparent: the Charge 3’s OLED panel is a touchscreen now that offers grayscale colors (not just black and white), with dramatically better resolution that drops the squarish, pixelated look of the old screen. The screen is bigger, too, with what Fitbit claims is 40 percent more active area, although there’s still a significant bezel around the edges that blends into the black background.

Less visible, but still crucial additions are the new 50-meter water resistance (which also enables swim tracking) and the improved battery life — Fitbit claims the Charge 3 can last up to seven days off a single charge, up from five on the Charge 2, claims that more than held up in the week and a half I tested it.

Fitbit has also changed the physical button on the side to what it calls an “inductive button,” a thumb-sized dimple on the left side of the tracker that offers a haptic response when you press it. I was expecting to hate this, a lot, but it was surprisingly good. The haptics feel good, and the button is used so infrequently anyway in the overall UI that I didn’t really miss the physical button at all. And it’s certainly worth the trade-off of enabling waterproofing and giving more space inside for battery life.

From a hardware perspective, it’s probably one of the nicest-looking devices that Fitbit has made — pair it with one of the optional leather straps, and you can probably get away with it as a semi-formal watch even. But the simple fact of size means that it’s tough to fit both the Charge 3 and a regular watch on the same wrist. If you’re someone (like me) who prefers to wear a regular watch, you’ll either need to choose between fitness data and fashion or just wear your Fitbit on the other wrist.

And you’ll need that higher-resolution screen, too, for what might be biggest addition to the Charge 3 — basic, smartwatch-style notifications that not only let you see incoming calls or texts, but alerts from basically any app on your phone.

For all its smartwatch aspirations, the Charge 3 is still very much just a fitness tracker

But for all its smartwatch aspirations, the Charge 3 is still very much just a fitness tracker, especially in its current state. At launch, it can display notifications from any app on Android or iOS (Windows Phone support is coming soon, seriously), but there’s no way to interact with them at all.

Android phones will eventually get a quick-reply feature for messages, but if it’s anything like the current implementation on Fitbit’s full smartwatches, it’ll likely leave a lot to be desired. And while Fitbit is promising “popular brand apps” for the Charge 3 in the future, right now you’re limited to a paltry selection of Exercise, Relax, Timers, Alarms, and Weather apps, with a similar small selection of watchfaces.

And even the smartwatch features it does have are mostly limited to working only when you’ve got a phone nearby — there’s no standalone GPS or LTE, no way to locally store music (or even control music that you are playing), and even the weather app can’t update without a phone nearby. Despite its smartwatch ambitions, the Charge 3 is still a dedicated fitness band first, albeit one with a few useful smartwatch features added on.

Fitbit has added some new tricks to the Charge 3’s UI, though, the most useful of which is a new dashboard found when you swipe down on the clock face that gives you running totals on your steps, heart rate, total distance walked, calories burned, stairs climbed, sleep, and menstrual tracking. It’s a useful menu, but I couldn’t help but wish for a little more customization when it comes to what the watchfaces themselves can show, which is limited to just step count and heart rate.

As for the fitness tracking itself, Fitbit continues to do good work here. There’s a reason that these devices are so popular and it’s because Fitbit’s trackers and the companion apps are simple, easy, and accurate.

I tested the Charge 3 with my usual mix of outdoor running, treadmill running, and walking around. In general, the automatic tracking was pretty good at detecting when I was running or walking, although you’re still better off activating the actual exercise mode on the watch to be safe. Starting things manually also lets you track GPS (using your phone, since the Charge 3 doesn’t have it on board), and gives you stats during your run directly on your Fitbit.

The Charge 3 is simple, easy, and accurate to use

The Charge 3 also offers automated swim tracking, which Fitbit had already offered on some of its other devices. Unfortunately, I wasn’t able to tell how well that feature worked in particular, given that the minimum threshold for the autotracking turning on is 10 minutes of constant exercise, and I’m just not that good at swimming laps (in my defense, 10 continuous minutes of swimming is a lot of swimming!) That said, the manually enabled swim tracking worked well enough, giving me mostly accurate tracking (it logged nine laps instead of the 10 I did, but the last one was pretty sloppy so it’s entirely possible that’s on me.) The Charge 3 also can’t show you any useful information while you swim: just time and heart rate, so you’ll have to count your laps yourself or wait to find out your average pace when you get back to your phone.

The Charge 3 has the same upgraded heart rate sensor that the company says is more accurate than previous versions. I don’t have the medical gear to properly test, but for amateur readings of “am I exerting myself right now” or “am I freaking out at the dentist,” it seemed correct. That said, if you’re a serious athlete or need medically accurate heart rate sensing, you’ll probably still want a proper system for that. And Fitbit still won’t sync its data to Apple Health or Google Fit, which isn’t exactly surprising at this point, but remains kind of frustrating.

Taken as a whole, it’s the most effortless fitness tracker that Fitbit has ever made. It works with nearly any phone on the market, whether you pledge your mobile allegiance to Apple, Google, or even Microsoft. It’s light and unobtrusive enough to always keep on your wrist, and stylish enough that you won’t have to take it off. Sleep tracking means that you can wear it at night, and waterproofing means that even while showering or swimming, you’ll never need to take it off. And the battery lasts long enough and charges fast enough that you’ll maybe have to take it off for an hour a week, tops.

And why would you take it off? Fitbit has improved its software to the point where you never have to interact with it — simply wear the Charge 3, and it’ll do the rest. It can figure out when you’re running or walking or biking or swimming and track that activity for you, know when you’re sleeping and when you’re awake, and even near constant heart rate readings.

And that’s where the Charge 3 excels. Not as a half-baked smartwatch, with promised features that likely won’t fill the place of a proper Apple Watch or Fitbit Versa, but for users who don’t want or need that functionality and just want some fitness tracking beyond what their phones can already provide. And in that regard, it succeeds.

Correction: Fitbit had previously offered automated swim tracking on other devices, not only the Charge 3 as this article originally claimed.