Easy to love, hard to live with

If you traveled back in time five years and asked what a futuristic 2018 computer would look like, there’s a pretty good chance that somebody would describe something very much like the Lenovo Yoga Book C930. It’s a svelte, small, and decently powerful computer that has so many different modes that it’s difficult to call it just one thing, and there’s not much else out there that resembles it in any way.

It’s not a laptop or a tablet or a note-taking device. Rather, it’s attempting to be all of those things at once, depending on your needs. It’s smaller than any Windows computer you’ve likely tried (save maybe the Surface Go), and it has two screens. One is a traditional LCD touch panel and the other is an E Ink screen that can change its function based on the task. Sometimes it’s a touch keyboard, and other times, it’s a sketchpad or an e-reader.

Almost everything about the new Yoga Book makes you want to love it. It’s the sort of device that makes you feel like you’re living in a future that would be more commonplace if only computer companies were just a little more daring. But it is also the sort of device that, once you use it, it makes you realize why everybody else has been so risk-averse. It’s much easier to love the idea of the Yoga Book C930 than to live with its reality — especially when that reality costs at least $999.99. 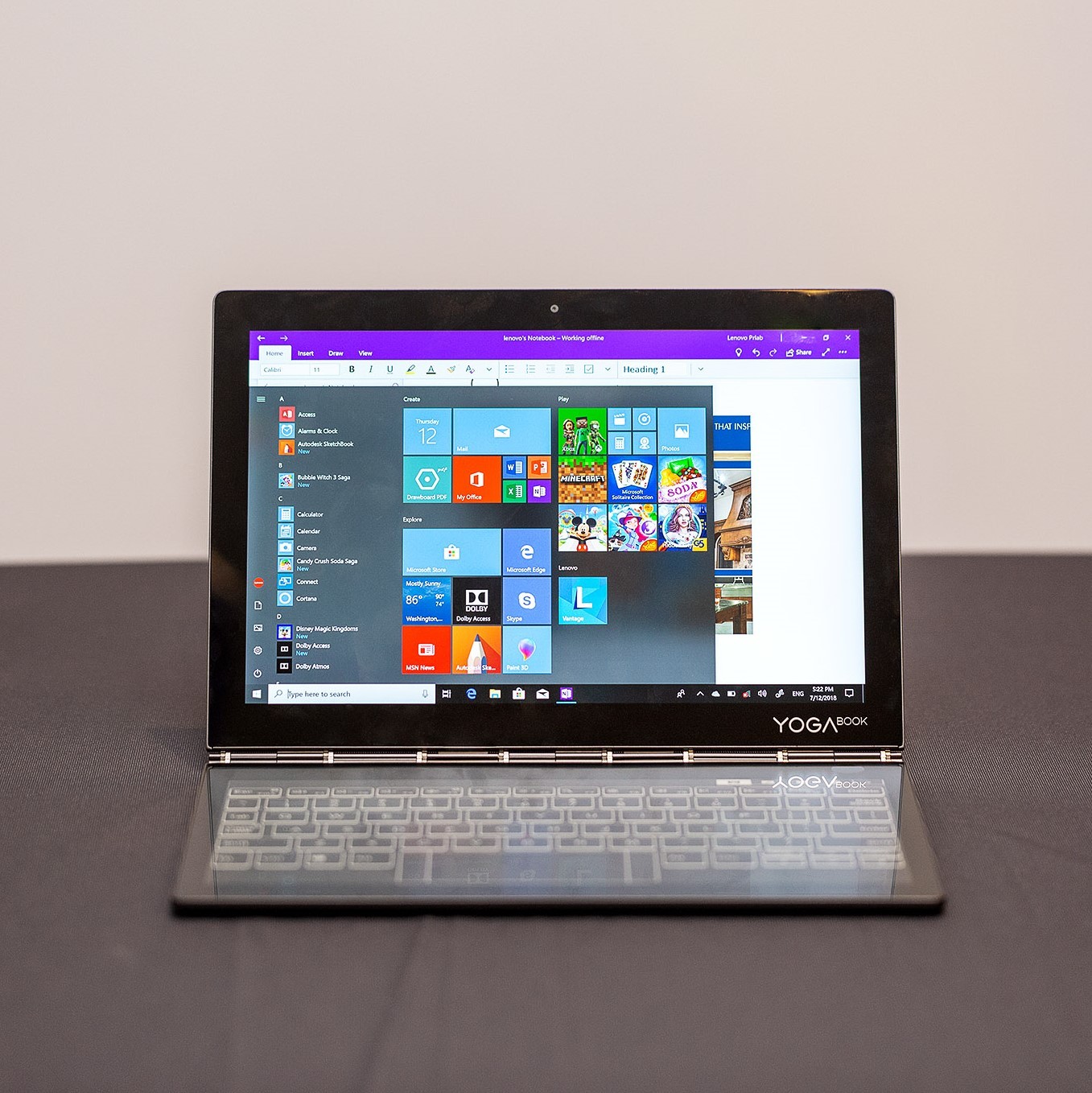 This is the second time that Lenovo has taken a shot at releasing a futuristic computer without a traditional keyboard. The basics of the new Yoga Book’s overall design are nearly unchanged. It’s incredibly thin and light for a full Windows PC, measuring just under 10mm thick when closed and weighing just 1.71 pounds. It has a 10.8-inch, 2560 x 1600 display that, sure, can feel a little bit cramped, but you can do a surprising amount of work on it.

Outside of one mystifying design choice, the build quality of the C930 is top notch. Everything feels solid, from the “watchband” hinge that rotates 360 degrees to the matte finish on the E Ink display to the textured power button. It’s a device that will virtually force people to ask you about it because it’s so tiny and unique.

That mystifying design choice is just opening the damn thing up. You have three choices: wedge a fingernail in between the two halves, literally “knock knock” on the top when it’s closed, or long-press the volume down button. The first is super awkward and weird, the second only works intermittently, and so by process of elimination, you’ll be pressing the volume button to open it. Why Lenovo didn’t just make a little cutout for your finger to grab will be a question for the ages.

The first Yoga Book was littered with compromises: a dinky processor, the wrong ports, and even the wrong operating system. It also didn’t have a second screen, opting for a weird touch-sensitive panel that you had to slap a pad of paper on top of to record your notes.

Lenovo looked at all of the problems on the original Yoga Book and tried to address them with the Yoga Book C930. In some cases, it was successful: this machine is a much more focused, intentional device. It only runs Windows; it has a relatively modern, 7th Gen Y-Series Intel Core i5 processor; and, most importantly, it swaps out that weird touch panel for a proper E Ink display. That’s where you type, draw, and take notes using the included pen. There are now two USB-C ports for connectivity and charging (but no headphone jack, sadly). Lenovo also added a fingerprint sensor for logging in. It works, though, personally, I’d have preferred a facial recognition camera.

Lenovo fixed many of the first Yoga Book’s problems, but there are still fundamental compromises

Battery life is nothing to crow about. Lenovo rates it at over eight hours of use, but I didn’t quite get there using just Windows. Six to seven seems like a safer bet, depending on what apps you’re running. However, if you use it as more of a mixed-use device — a little Windows here, a little ebook reading there — you’re likely to hit that number or better.

Just as a Windows computer, it does its job and performs well enough (about in line with a low-end device with 4GB of RAM). Which is to say: it will run Office and let you do basic kinds of stuff, but don’t push it too much. The small screen sort of helps set expectations here. You wouldn’t ever try to tackle a huge Photoshop project on this thing, and you shouldn’t.

Any new kind of computer needs to justify its existence. Why would you get this instead of something simpler, like a Surface Go tablet or a traditional laptop (with a traditional keyboard)? And that bar is even higher for something that starts at a thousand bucks.

So let’s talk about that E Ink screen.

The first and most important thing to know is that it’s nicer to type on than you might expect, though I suspect your expectations aren’t very high. Lenovo has a special mode that maximizes the keyboard size and minimizes the touchpad, which cleverly expands only when you tap on the bottom when you want to use it. That little bit of extra space makes the keyboard much more usable, and Lenovo is also doing the standard trick of correcting for your mistypes with its software.

But typing on glass is still typing on glass, and no amount of haptic vibration can change that. You can’t really rest your hands on the keyboard, long fingernails will be a problem, and it gets tiring after awhile.

Honestly, that is probably going to be the end of the story for most people: an incredible device with a not-so-great typing experience. The idea here is that there are other things that you can do with the E Ink screen that offset the compromise on the keyboard. But I’m just going to tell you right now that they mostly consist of more compromises.

You can also use it as an e-reader, and since the device is so small and light, it’s comfortable to hold and read with it. Unfortunately, at launch it only supports PDFs; Lenovo says that ePub, .mobi, and plain text support will come next year. It’s nice enough for simple reading, but you can’t mark up or even highlight text. You can only use a fiddly, resizable box to screengrab portions of what you’re reading. And don’t ever expect to be able to read your Kindle library on it. The whole thing is just a huge missed opportunity.

The writing experience is better than expected, but it’s not as seamlessly integrated into Windows as I’d like

My favorite mode is note-taking, which lets you sketch out your notes on the E Ink screen. It’s really neat to just fold the Windows screen back and have a small notepad thing to jot your notes down on. You can grab the OCR text from them automatically and get them into OneNote, too. You can also grab a screenshot from Windows and mark it up, but the experience of actually doing so is hellaciously fiddly. Trying to re-crop the image to what you want to actually comment on is a huge hassle on the E Ink display.

Though the E Ink screen has a decent refresh rate relative to other similar screens, the overall experience of using it is maddeningly slow. You switch modes by tapping small little buttons in the upper-right corner, and it takes a very long time to change. You can turn off the Windows display and just use the E Ink side, but you have to double tap the screen to do so, and sometimes it just doesn’t register. The device tries to automatically present different options to you, depending on how far back you’ve tilted the hinge or what orientation the device is in. But in practice, it often gets it wrong, and you’re left sort of flipping and folding the Yoga Book around to get it working.

I admit it: I really want to like the Yoga Book C930. I like that Lenovo is not only willing to take a chance on a weird design, but also to iterate on it and make it better. Just considering the device as a physical object and even as a concept, I love it.

Easy to love, hard to live with

But even if you can get over the awkward experience of typing on glass, the software that runs the E Ink screen makes the Yoga Book hard to love. There are probably niches where this device will be interesting, like for people who need a clipboard-style computer with the full power of Windows and a quick way to jot down notes.

For a thousand bucks, though, there are much better and more versatile options. They won’t wow strangers at a coffee shop, but they will let you get your work done without getting in your way.