Can you have fun using a business laptop?

When I showed the ThinkPad X1 Extreme to some of my friends, they were puzzled. “Why is that red joystick still there?” “I thought Lenovo only makes school computers now?” And I can’t blame them. An all-black carbon fiber / graphite exterior, few branding details, and the keyboard / mouse layout that ThinkPads have historically been known for are all present on the X1 Extreme. Those features kind of make it look dated, even though it’s one of the most powerful and capable laptops I’ve used all year.

As configured, this review unit is a steep $3,149, though you can get an entry-level X1 Extreme for as little as $1,673. This particular laptop is similar to HP’s 15-inch Spectre x360, a convertible laptop for consumers. In addition, the Lenovo has a ton of business-centric features, such as multiple layers of security (facial and fingerprint recognition), a legacy port selection (USB-A and SD card ports), MIL-STD 810G certification with a spill-proof keyboard, and a long battery life.

ThinkPads are made for business, government, military, and IT users, and this one ticks all the boxes for them. Surprisingly, it’s a great laptop for the rest of us, too. 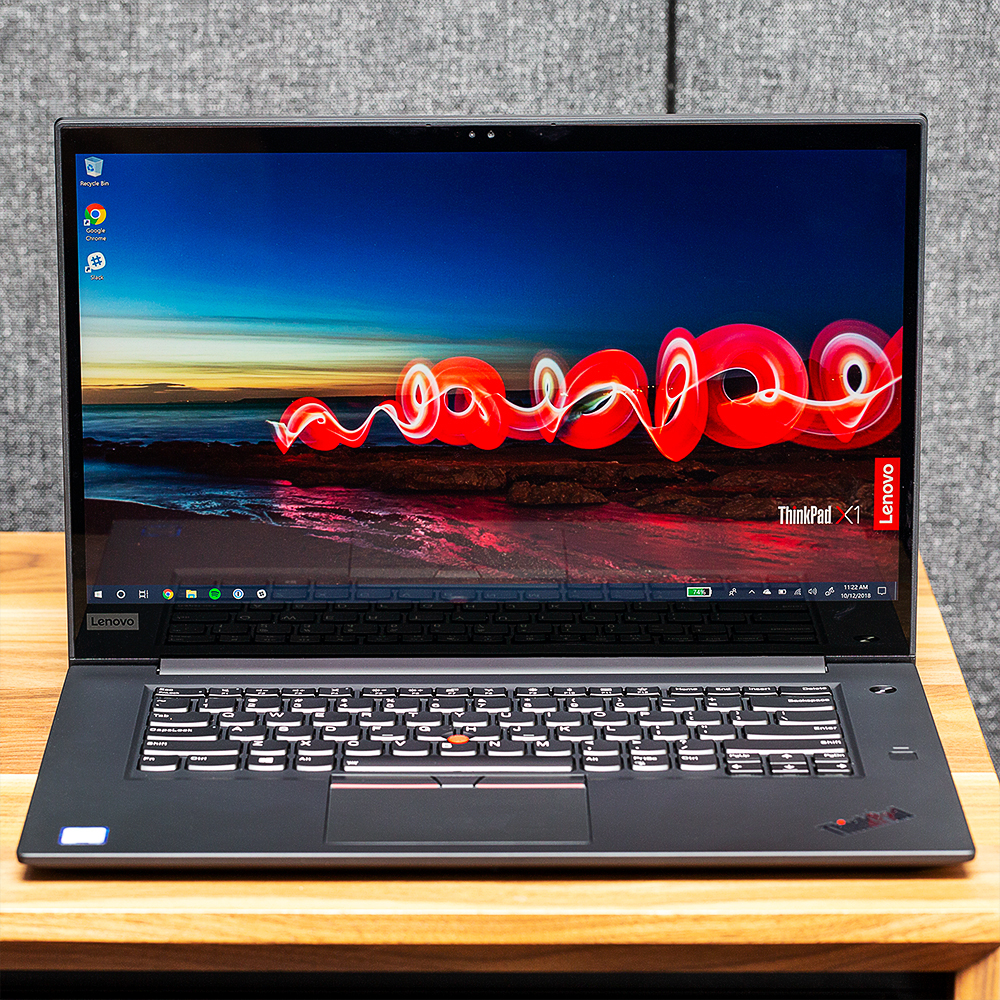 If you work in an industry that the ThinkPad X1 Extreme is designed for, one of the first things you’ll be concerned with is durability. Thankfully, Lenovo invested a lot in the X1 Extreme’s carbon fiber / graphite chassis. It can withstand an accidental liquid spill on the spill-proof keyboard (a hallmark feature of ThinkPad keyboards), and thanks to its MIL-STD 810G durability certification, it can also take some knocks and drops. There’s zero flex or give in the palm rest, keyboard, touchpad, or lid; it’s a rock-solid body.

Besides being durable, I think the X1 Extreme has one of the more tasteful ThinkPad designs in recent memory. It’s not a thick, corporate laptop. Instead, has a svelte aesthetic with a smooth, matte finish.

Unfortunately, it doesn’t take long before you start to see the oil from your palms and fingertips all over the X1 Extreme. On the bright side, since the keyboard is spill-proof, you won’t have to worry about using a little cleaning solution to wipe it down.

Lenovo has done its ThinkPad users another service by having a variety of current and past-gen ports available. It’s refreshing to already have the ports you need without having to reach for a dongle like with so many other modern computers.

On the left-hand side, you’ll come across two Thunderbolt 3.0 ports, an HDMI out, an Ethernet extension port, power port, and audio jack. On the other side are two USB 3.0 Superspeed ports, a Smart Card reader, and a full-size SD card slot. If you plan on editing or viewing tons of photos or video on the road, that SD card slot is your ticket to a dongle-free lifestyle.

The hallmark of every ThinkPad laptop is its keyboard, and the X1 Extreme doesn’t disappoint. The keys have a familiar layout and shape, with a tactile feeling that’s comfortable and only takes a few hours to get used to. I can see myself spending hours at this keyboard. It’s just that good. Lenovo also included a backlight with low or high brightness settings, which is useful when you need it.

While I may love the X1 Extreme’s keyboard, I don’t have the same sentiment toward the Precision touchpad. For pointer control and tracking, it’s good — albeit a bit on the small side — and it has full Windows 10 gesture support. My issue is with the layout that pays homage to past ThinkPads. It’s unusual to position the mouse buttons above the touchpad, rather than below it. If you consider the ThinkPad’s method, there’s less travel time between the keyboard and touchpad, but on the other hand, it requires you to get used to it.

The red circle in the middle of the keyboard is Lenovo’s TrackPoint input device. It looks like a joystick, but it’s not. The TrackPoint is a pressure-sensitive device that allows you to move the cursor around without moving your hands from the keyboard. I don’t have any use for it, and I always ended up using the touchpad.

The screen is bright and beautiful

Lenovo has every reason to be proud of the X1 Extreme’s 15.6-inch glossy 4K touchscreen. It’s a bright screen, so you can easily read text outdoors or in office lighting. Images have so much color pop, contrast, and saturation that I thought I was looking at a Samsung display. Also, you can lay it completely flat and watch Netflix in 4K and HDR.

However, the ThinkPad X1 Extreme falls a bit short in the speakers department. Lenovo touts that the two 2W Dolby speakers have an impressive range, but that’s just not the case. Compared to consumer laptops like the HP Spectre x360 and the Razer Blade 15, dialogue in The Punisher produced by the speakers came without any gravitas from the lows. Meanwhile, highs can sound a bit too squeaky to bear at high volumes, making the speakers one of the X1 Extreme’s lowest points.

The ThinkPad X1 Extreme review unit that I’ve been using has a high-end spec sheet, which directly contributes to its high price tag and its blazing performance. The ThinkPad X1 Extreme uses a faster Core i7 processor than Razer’s Blade 15, which is a consumer-facing gaming laptop. Between the speedy processor, beefy 32GB of RAM, dedicated GTX 1050Ti Max Q graphics, 4K screen with 100 percent sRGB color coverage, and massive 1TB solid state drive, there’s enough power here to make the X1 Extreme your daily driver. I don’t know about you, but when a laptop has more RAM than my desktop, it becomes the de facto machine to get Lightroom and Photoshop work done.

You can even get away with playing a few of the less graphically intense PC games, like Counter-Strike: Global Offensive or League of Legends in 4K at med-high settings and still maintain 60 fps.

You can get away with some light 4K gaming

Unfortunately, there are a few issues that arise when the X1 Extreme is pushed to the extreme. If you’re playing a game, watching a video for 20 minutes, or otherwise spending extended time using the ThinkPad, you’re eventually going to hear the fans spin up, pushing hot air out of the chassis. That’s perfectly normal! It’s not distracting when it’s on a table, but when it’s on your lap, it’s loud. It seems as if the whistling sound is caused by the vents on the bottom plate getting blocked when it’s on your lap or a bed, for example. In those scenarios, the fans are definitely distracting.

Thankfully, whether it’s on your lap or not, there isn’t too much heat dissipation that you can feel on the laptop’s palm rest. Instead, you’ll feel most of the heat on the bottom aluminum plate, which is why I recommend using it on your lap sparingly.

Security is a big part of the X1 Extreme’s arsenal. Besides having a TPM 2.0 chip for encryption, Lenovo has fitted this ThinkPad with two forms of Windows Hello authentication: fingerprint and facial recognition. Other high-end laptops like the Spectre x360 also have fingerprint and facial recognition, but the ThinkPad seems to do a more consistent and faster job with both.

Lenovo advertises a 15-hour battery life for the ThinkPad X1 Extreme. But in my experience — with Bluetooth off, display brightness set to 50 percent, keyboard backlighting off, and the high-performance power plan in Windows 10 enabled — I reached about 10 or 11 hours of browser usage. That includes visiting YouTube, using Google Docs to write this review, and reading The Verge.

Considering this laptop has a 4K screen and a Core i7 chip, I think 10 hours of battery life is great. You can charge the X1 Extreme’s battery from 0 to 80 percent in just 30 minutes with its surprisingly small power brick, thanks to Lenovo’s rapid charging. Unfortunately, the included brick does not use the X1’s USB-C ports, and you can’t use it to fast-charge your phone, though you can charge the battery through them with another adapter.

One of the best laptops of the year

The ThinkPad X1 Extreme is one of my favorite laptops of the year. It takes the best traits of mainstream consumer laptops (4K, Dolby, and Precision touchpad), blends it with gaming laptop features (Max Q discrete graphics and HDR), and adds in the best qualities of a business laptop (durability, security, and a low-profile). Of course, it’s not without its faults: the X1 Extreme’s speakers aren’t the best by far, the fans can get noisy, and the aluminum bottom plate can get pretty toasty on your lap.

If configured to be a high-end machine, the ThinkPad X1 Extreme is probably the best business-oriented Windows 10 laptop you can buy. I’d even go a step further and say it’s one of the better machines to come out this year. Lenovo has proven that a business laptop can also be used as a powerful, everyday computer.