More expensive than any Boosted but not better

By Stefan Etienne@StefanEtienne Oct 31, 2018, 10:26am EDT
Photography by James Bareham

Electric skateboards are everywhere, and you can thank the sudden boom in rideable companies for that. Boosted Boards leads the charge, but it’s not the only player in the market. Evolve Skateboards has been around for a few years, and it recently released an updated version of its Bamboo GTX electric skateboard.

But there’s a problem: this electric skateboard costs $1,779, making it more expensive than the top-tier $1,599 Boosted Board, the mainstream $1,399 Boosted Board, and the $749 Boosted Mini. What you get for a couple hundred dollars more ultimately isn’t worth it because the Bamboo GTX falls short on all the things a Boosted Board does better. 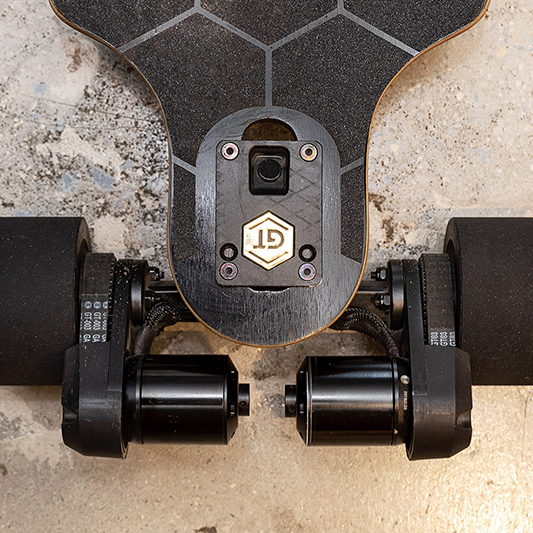 The remote and board are an odd couple. On one hand, the GTX Bamboo board has great build quality with huge trucks, wheels, a flexible bamboo deck, and a total weight of 19.4 pounds. (It’s heavy.) But the remote, which looks like an off-the-shelf part, isn’t flattering at all. The cheap, warped plastic display looks more fitting for a toy than the remote for a $1,700-plus piece of rideable technology.

Considering the steep asking price, the GTX Bamboo remote isn’t better than what you get with Boosted or Inboard electric skateboards. The remote has a very bare-bones user interface that walks you through the riding modes, battery life of the remote and board, and your current speed.

Comparatively, the Boosted remote doesn’t have a screen, so it can’t display any information beyond battery life and riding modes (using blinking lights and beeping sounds). But it is the better remote because of its build quality and rider feedback. Meanwhile, the GTX Bamboo remote has a fascination with buttons: it has a “safety clutch,” acceleration trigger, braking lever, and two multifunction buttons that are used for changing rider modes. It’s nowhere near as comfortable to hold due to its larger size, and it definitely isn’t as well-built.

Despite the remote’s shortcomings, the GTX Bamboo’s ride comfort and acceleration are actually pretty good. The Bamboo GTX has a top speed of 26 mph (2 mph more than the Boosted Stealth), so you’re well on your way to breaking city speed limits. You can get over most pavement without much instability, cruising over changes in consistency of the road or elevation without any issues.

The Bamboo GTX is fine to ride when you have the street to yourself, but the stop-start feedback you get from using the brakes in a pinch — say, while trying to carve between cars — is unsettling. I wouldn’t take the Bamboo GTX to its top speed and try to stop on a dime; that’s just reckless. I feel much more confident stopping short riding a Boosted Board because I know it won’t throw me off or cause me to lose my balance at over 22 mph.

The GTX Bamboo has 31-mile battery range (more than any Boosted), and I found similar results in my testing. Usually, I had to stop riding at the 25-mile mark before needing a charge. You can also make use of the four different riding modes: Safety, Eco, Fast, and GT. If your commute is in a city, and you factor in using the slower modes while running errands around town, you should be able to travel without the wall charger.