Invoxia GPS Tracker review: longevity and range from a new kind of network

No SIM card required for the low-power Sigfox IoT network

Share All sharing options for: Invoxia GPS Tracker review: longevity and range from a new kind of network

The problem with most GPS trackers is battery life, as they require a power-hungry GSM cellular connection to transmit location. A GPS tracker from Invoxia, however, claims to have overcome this limitation by using a new low-power network called Sigfox, which has been quietly rolling out across the globe over the last few years. The switch from GSM to Sigfox allows Invoxia to claim up to six months of GPS location tracking between charges, compared to the few weeks or days achieved by traditional GPS trackers.

It’s the range of Sigfox, and its large footprint in Europe, that gives the Invoxia tracker an advantage over Bluetooth trackers as well. Relatively tiny Bluetooth trackers like Tile depend on other Tile users to create a community of beacons. The larger the community, the better because it increases the odds of a Tile user coming within range of your misplaced (or stolen) goods in order to transmit their location. The Invoxia GPS Tracker can be seen anywhere that Sigfox is deployed.

Our review of Invoxia GPS Tracker 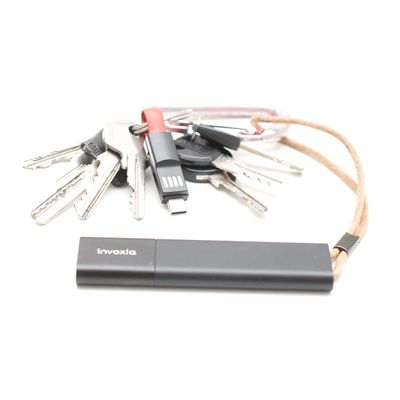 The €99 Invoxia GPS Tracker resembles an oversized Juul. The aluminum tracker with leather cordon isn’t tiny by tracker standards, but it’s small enough to place inside your suitcase, motorcycle seat, or your kid’s backpack — whatever you want to keep track of. It gathers location information via GPS and Wi-Fi and transmits it over the low-power Sigfox wide-area network. You can follow the location of the tracker in the Invoxia GPS app for iOS or Android.

WHAT’S SPECIAL ABOUT IT?

Sigfox is the differentiator here. The eponymous low-power, wide-area network from its French parent claims to be the world’s largest IoT network. It’s designed to cover broad swaths of the planet and easily penetrate objects like walls, allowing it to reach deep into buildings and underground. Unlike GSM networks, Sigfox can only transmit small chunks of data, like location information. It’s already live in much of Europe, with scattered pockets of Sigfox coverage found in major cities across the US, Australia, South America, and Japan. Sigfox is battling LoRaWAN to become the standard for IoT networks globally.

If you’re expecting the kind of real-time GPS tracking found in apps like Find Friends or Google Maps, then you might be disappointed. You’ll be able to find lost or stolen items with accuracy, but the tracker only reports its location every five or 10 minutes, depending on how you set it up. Even then, it only reports its location when it’s been moved in order to help preserve the battery. I tested on the most frugal 10-minute setting, and my battery shows 27 percent remaining after two months of moderate usage. Invoxia says the battery will last one to six months, depending on usage and activity.

Although I initially wanted to put it on an expensive electric bike I was storing outside in theft-happy Amsterdam, I wasn’t able to because the Invoxia tracker isn’t waterproof. It’s also too long to hide under the saddle where it could be protected from the elements. So mostly, I kept it attached to my daughter’s backpack, which she uses almost daily.

My kid just started walking to school alone. Initially, I found it comforting to receive alerts telling me that her bag (with her attached, I assumed) arrived in the “school” zone I had defined in the Invoxia app. But (yes, that’s a big but), helicopter parents please take notice: on a few occasions, the tracker never reported my daughter’s arrival until several hours later.

Analysis of my data by Invoxia showed my tracker losing data points as a result of a weak Sigfox network signal in my neighborhood. As such, the tracker was unable to send an alert upon entering the zone. It wasn’t until later, when she once again moved her bag for gym or lunchtime, that the tracker woke up, negotiated a successful Sigfox connection, and then alerted me to its location. But this was sometimes three to four hours after I should have received an alert telling me that she had arrived at school. I imagine this could cause some parents to freak out. My tracker has since been updated to introduce redundancy and help with spotty coverage, but I haven’t noticed any improvement on this front.

When I’ve misplaced the tracker in my house, I’ve successfully used the app’s Bluetooth-powered Find Me feature and its visual proximity radar to successfully guide me to it. You can also tell it to “start ringing” to help find the tracker when it’s buried inside a bag or the sofa. The tone is very soft, however, making it useful in only the quietest of rooms.

AM I HAPPIER OR MORE FULFILLED?

Peace of mind is a valuable thing. It’s why we buy insurance for life and property, after all. The Invoxia GPS Tracker, like any tracker, is a discrete insurance policy for whatever you don’t want to lose. In that way, it’s comforting to have it attached to the things I value most.

Using it to track a child, though, will probably cause parents more stress than relief.

SHOULD YOU GET ONE?

The Invoxia GPS tracker is one of the very first consumer devices to take advantage of the new IoT networks that are popping up in so-called “smart cities” around the world. Being first has its risks, of course, but also its rewards. For example, after paying the initial €99 for the tracker, you don’t have to pay for a GSM data plan, which typically costs between €5 and €10 per month. But you will have to start paying €9.99 a year to subscribe to the Sigfox network after the first three years... assuming it still exists.

If that risk / reward calculation sounds favorable to you, and you live and operate within Sigfox coverage, then have at it. The Invoxia GPS Tracker works as advertised.