Folding phones are the stuff of science fiction

Samsung’s foldable Infinity Flex smartphone is the stuff of science fiction. For decades, incredible visions of gadgets with screens that can bend, fold, or even roll up like newspapers have appeared in movies and TV shows. They’re a handy way to project how today’s smartphones and tablets might evolve in the decades to come, and they provide gorgeous eye candy to boot.

In the process, they've given us vivid examples of why folding phones could be more than the latest gadget gimmick or another screen to scratch. They could actually be useful. According to these fictional futures, three primary reasons stand out:

Note:The AMP version of this story won’t show our awesome, awesome video clips of all these devices transforming. For that, click here. 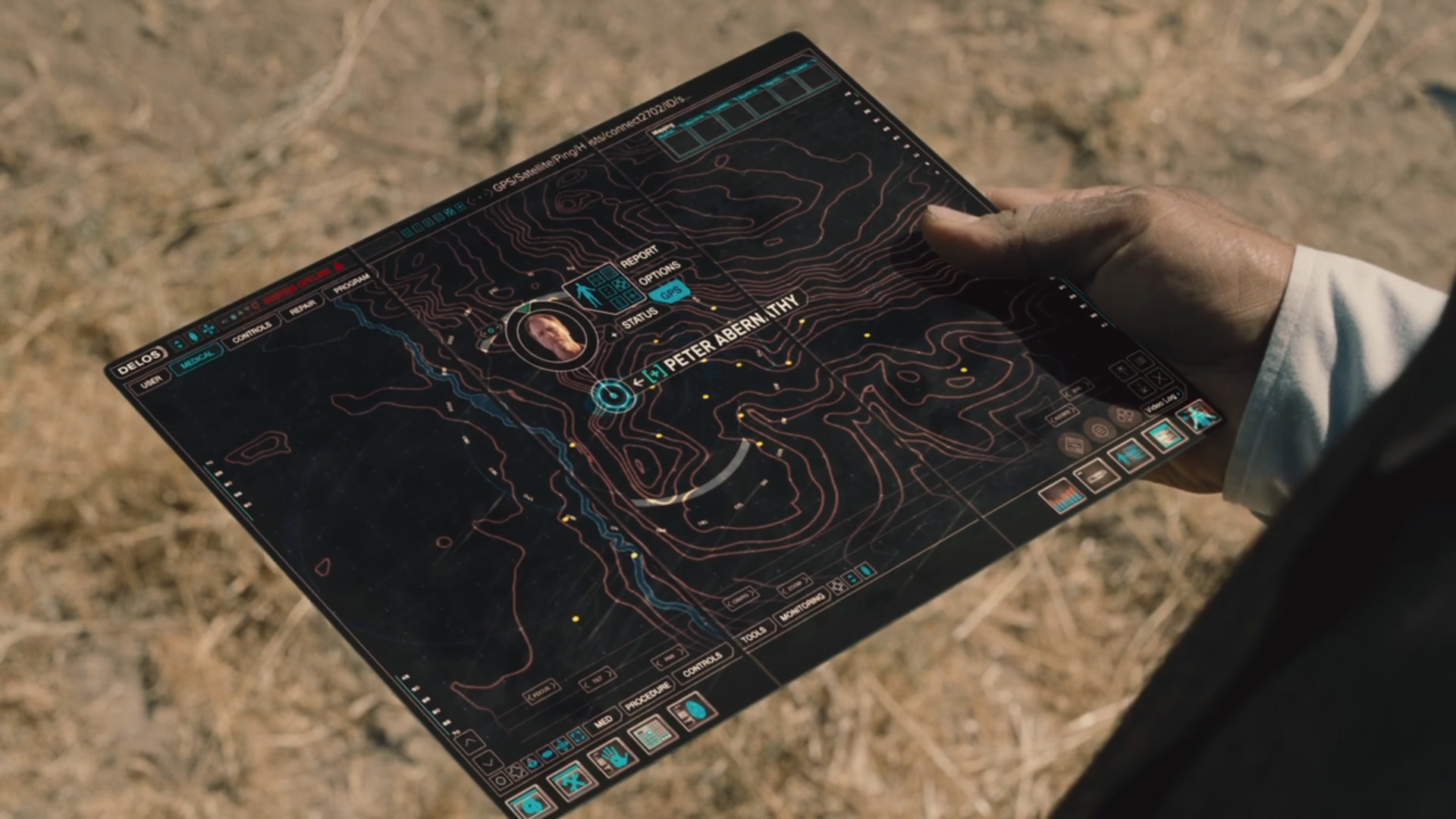 Let’s start with the delightfully dark Westworld because its trademark tri-fold tablet seems closest to what Samsung wants to build in reality. In Westworld, this somewhat pocketable device is used by every Delos employee for any task that’d require a smartphone or tablet today — not just modifying the behavioral programming of Westworld’s robotic hosts, but also mundane phone calls, GPS location tracking, you name it.

The device doesn’t get any larger than today’s tablets, but we’ll say it satisfies tenet #2 because we do see it fitting into pockets in several scenes. That means it’s way more portable for mobile workers than the Surface Pro or iPad Pro they’d need to get a similar-sized screen these days.

As for tenet #3, just look at the difference between Dr. Ford and Bernard’s programming styles: Ford often prefers to use just two screens, while Bernard uses all three. 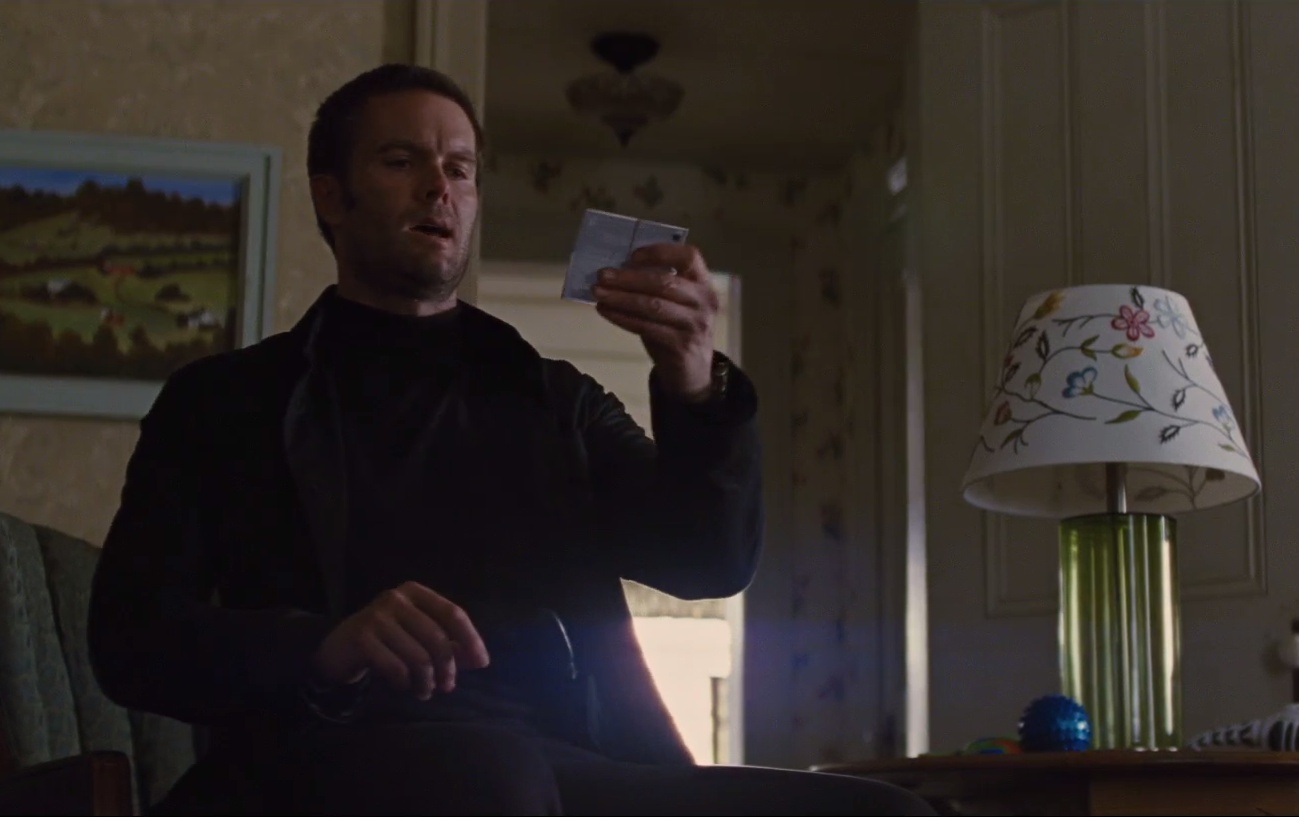 Blink and you’ll miss it, but years before The Last Jedi, director Rian Johnson’s time-hopping drama Looper featured a bendy phone. The reason you might have missed it? It folds down to basically nothing, like an origami fortune-teller. It’s barely in most shots.

But it’s my favorite example because as awkward as the flimsy design looks for typing, it meets tenet #1: a have-your-cake-and-eat-it-too phone that offers a decent size screen, and it could probably even fit in women’s notoriously tiny pants pockets. (Where have all the small phones gone?)

You can thank VFX artist David Ridlen, who talks more about the Looper phone 's design in this YouTube video.

Earth: Final Conflict — aka the other show from Star Trek creator Gene Roddenberry — brought us this incredible shrinking gadget way back in 1997. Say hello to the Global Link, a personal communicator, scanner, and all-around smartphone-before-smartphones with what’s, presumably, a roll-up display in its innards. (Roll-up displays are also a real thing.)

Clearly, the Global Link lets the user — or app? — define the width of its screen.
Earth: Final Conflict and Alliance Atlantis et al.

I say “presumably” because, depending on the episode, the mechanism works in different ways. Sometimes the screen pulls straight out, sometimes it pops out by itself, and most often, it just happens off camera (so we don't get to see).

Since the actors generally wear it on a belt rather than in their pockets, it’s not quite a tiny phone, but it does seem to stretch for various tasks. (It’s definitely wider when scanning for infection.) So let’s assume tenet #3 is satisfied here. It’s as much screen as you need.

Speaking of Star Trek, stretching displays, and medical scanning, the somewhat forgettable Star Trek Beyond takes those ideas to the extreme with the Diagnostic Wrap.

According to designer Chris Carlozzi, it’s basically a super-sized Star Trek tricorder (a small handheld scanner with encyclopedic knowledge and diagnostic abilities) that adds an immense augmented reality screen to show you what you’re looking at. So it’s a little bit like Google Lens.

There’s no way you’d be able to carry a conventional tablet that size while dodging disrupter fire from invading aliens. But because the screen folds away, tenet #2 lets Bones do just that. 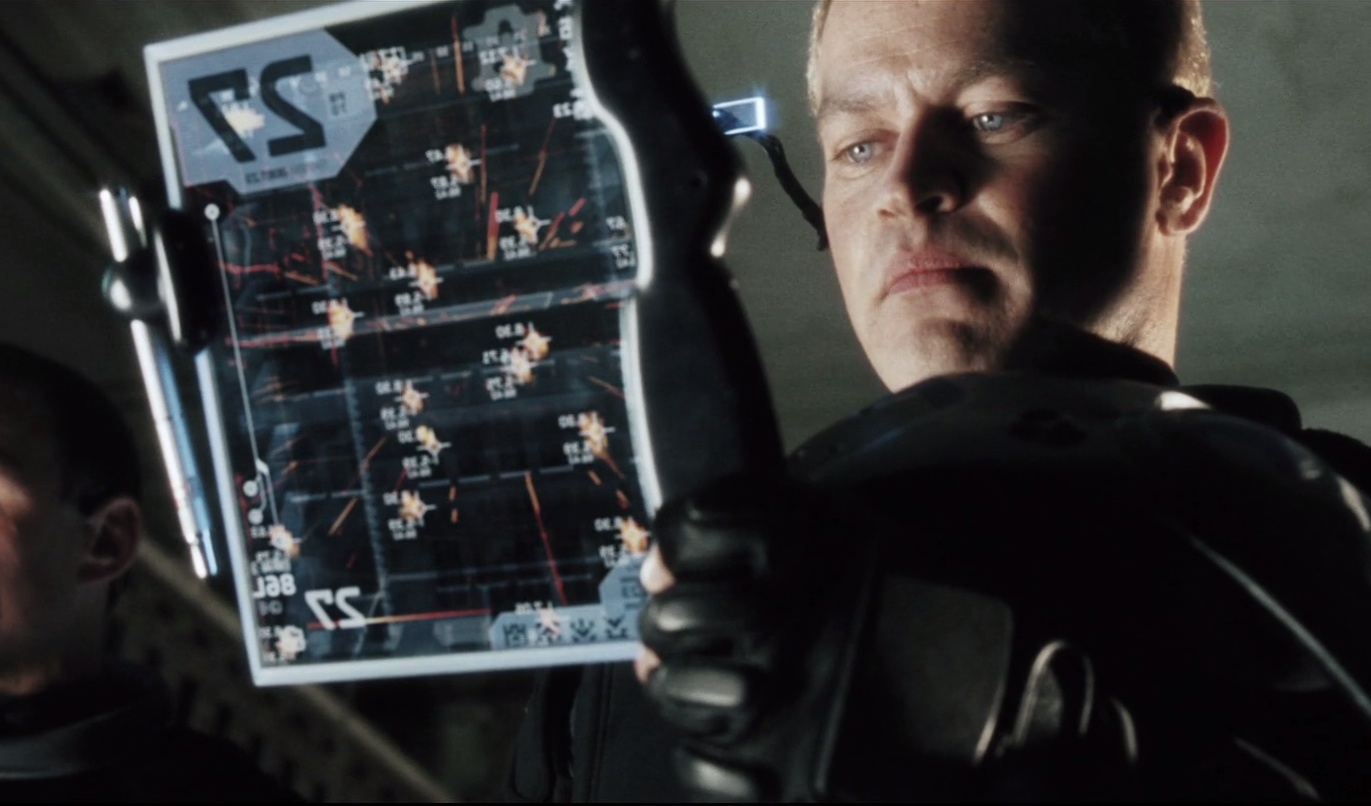 There’s one thing you should know about Star Trek Beyond’s stretchy holographic tablet: Minority Report did it 14 years earlier. The Spielberg film famously convened a summit of technology visionaries so it could paint an accurate picture of the future way back in 1999. As a result, it’s chock-full of futuristic interfaces — whether they make sense or not.

In fact, here’s a second foldable screen from the movie:

In both cases, tenet #2 lets the citizens of 2054 carry around pretty big screens without a care in the world (except maybe for constant surveillance). 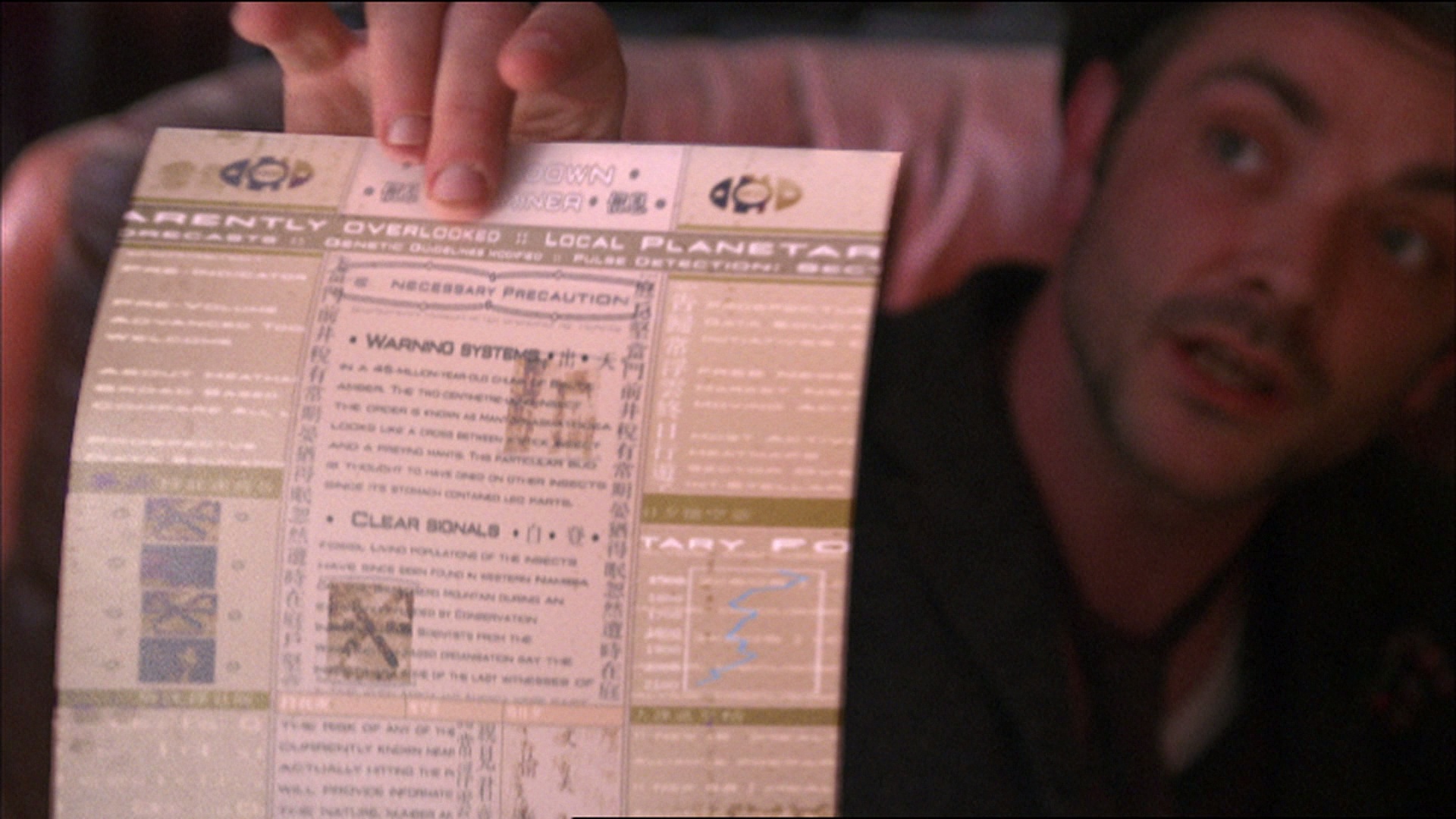 I’m mostly including this because everyone, including me, loves Firefly. It is known.

Honestly, Firefly’s flexible screens are weaksauce. But they do hint at a world where e-paper is so commonplace that it melts into the background. They might even be disposable. And since I’m guessing that map rolls up nice and tight, they probably satisfy tenet #2.

The Expanse is an incredible work of science fiction in so many ways, but here’s a new one, assuming you accept my thesis: its “hand terminals” give us all three of the sci-fi benefits of folding screens in a single package.

They don’t actually fold; these translucent tablets have holographic, not physical, extensions. But the volumetric projections add up to the same thing: a larger two-dimensional screen whenever the users need one, offering more info and, presumably, more “buttons” to play with.

This awesomely bad Jet Li film had a phone with a rotary folding screen — or, more accurately, an uber-specialized wormhole retargeting device that the alternate universe cops (including a pre-Transporter Jason Statham) use to chase Jet Li down.

It’s just as retro-tastic as the film. It’s a giant phone in a tiny flipping package. I want one.

The Hitchhiker’s Guide to the Galaxy

As awesome as The Hitchhiker’s Guide is, the 2005 adaptation of Douglas Adams’ comedy novel has the most boring folding-screen device on this list. It’s just a computer book made of bendy screen.

But I’m including it because I was surprised to find that there weren’t a lot of folding screens when I started looking at science fiction — not even obvious book-shaped ones like this.

I’d thought I’d find a folding display in Avatar, Starship Troopers, The Fifth Element, Black Panther, or Ender’s Game. I swore I’d seen one in Her, Black Mirror, Metal Gear Solid, Pokémon, or Batman: Arkham City. Surely, Bruce Wayne or Tony Stark must have had a folding phone or two? But when I went to look, most of the devices I remembered were simply tablets or fancy holograms.

Even Chris Noessel (@scifiinterfaces), author of Make It So: Interaction Design Lessons from Science Fiction, didn’t have many additional expanding screen examples to offer when I asked him via email.

That’s partly because tablets and phones used to be futuristic enough ideas on their own. Since then, it seems that visions of the future have migrated primarily to transparent tablets and volumetric projections, often known as holographic displays. In Iron Man 2, Tony Stark doesn’t need to pull a giant tablet out of hammerspace. He can just use his transparent phone to hijack a nearby TV.

Noessel did have a few guesses as to why filmmakers might prefer transparent displays over foldable surfaces. Here’s what he told me:

[A folding tablet would be] Difficult to create: It’s a LOT of work. (More than flat, square screens.) It must map believably to the deformed surface, track perfectly with the camera and actor movement (and if it’s bendy and in an actor’s hand, it will be bent), and do all that while appearing to bounce light and shadow believably.

Diegetic Believability: The worldbuilders have to answer why the display is bendy. Then the tech (and its associated work) has to appear anywhere in the diegesis where such things would be expected (e.g. newspapers would be almost everywhere).

Difficult readability: The bendiness means some of the text is significantly deformed, and so any information it is meant to convey will be more difficult.

Narrative Payoff: Especially in high-budget (and therefore risk-averse) movies, each new tech has an economic and narrative cost. If the narrative payoff isn’t worth the cost, it’s out. Bendy displays may not signal high-techness (via inference or trope) as much as transparent displays or VP [volumetric projection].

There’s also something to be said for shots where you can see a screen and a character’s reaction to a screen at the same time. Transparent displays are wonderful for that.

Still, I wonder if folding devices are really the future -- or just a stopgap 'til we can touch holograms for real.