Is there any reason to buy a 240Hz monitor?

By Stefan Etienne@StefanEtienne Nov 29, 2018, 11:30am EST
Photography by James Bareham

High refresh rate monitors have become the standard for PC gaming because they allow for much smoother game visuals compared to standard monitors. The majority of gaming displays run at 144Hz, which is considerably faster than the 60Hz of a typical monitor. That means the gaming monitor can refresh all of the graphics on its screen at a rate of 144 times per second, providing those smooth graphics gamers crave.

The benefits of high refresh rate screens become more noticeable the more you use them. At first, it might not be obvious if you haven’t experienced it before, but you’ll notice smoother game visuals and animations. It will also become easier for your eyes to track and acquire targets in first-person shooters. The fluidity of elements on-screen isn’t only reserved for games, however. Moving the cursor across the screen appears smoother, and Windows 10 animations appear just a little more snappy and polished.

MSI’s $479 Oculux NXG251 isn’t content with just 144Hz, though; it can do 240Hz, which is nearly double what most gaming monitors tap out at. It also has a 1-millisecond response time, which helps eliminate ghosting or motion blur.

Our review of MSI Oculux NXG251R 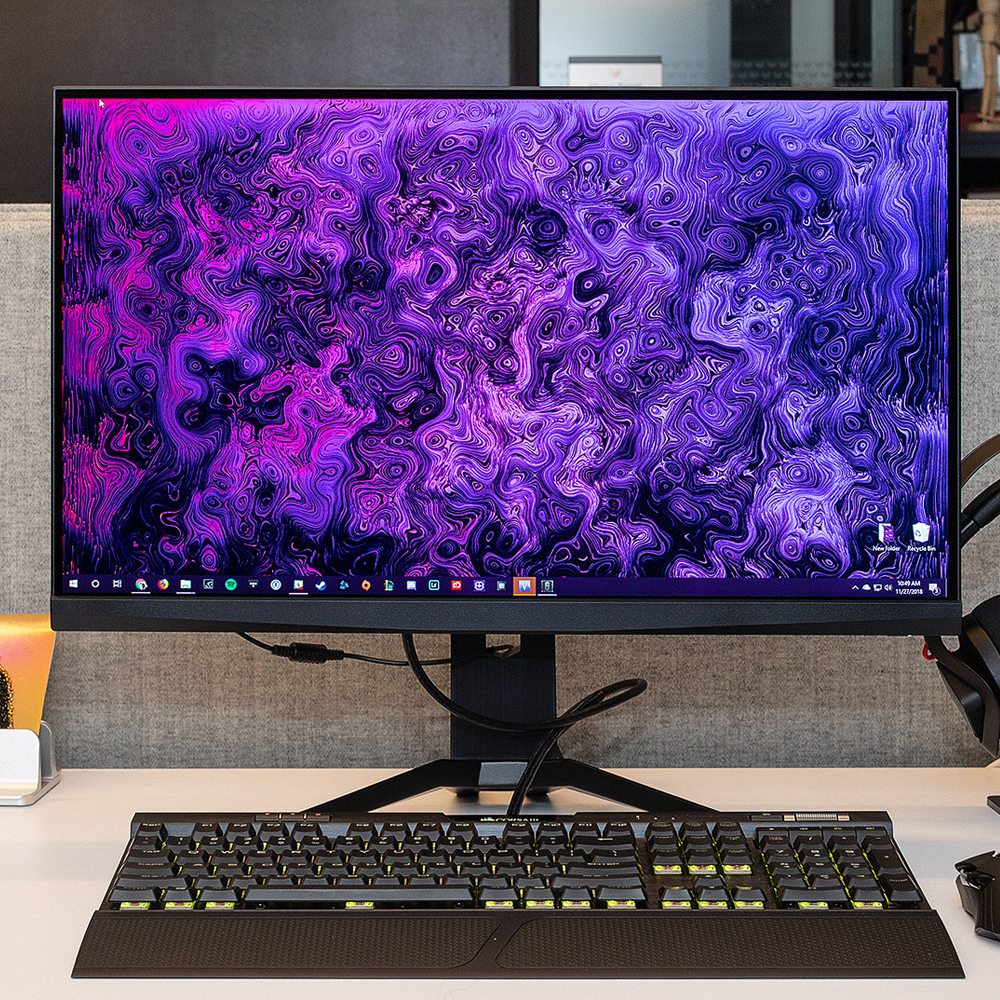 MSI says the monitor’s MSRP is $479, but as of today, the only retailer you can purchase the NXG251 from is BestBuy, priced at $499. A representative from the company stated the monitor will be available at more retailers in the coming days.

But does 240Hz make as much of a difference in gameplay as its high number would lead you to believe? That largely depends on what games you play. This kind of monitor is best suited for competitive FPS players, MOBA fans, and anyone who has twitch-like reaction times to the virtual objects moving on-screen. It’s far easier to discern a difference in smoothness between a standard 60Hz display and a 144Hz gaming monitor than it is between 240Hz and 144Hz. Unless you pay really close attention, you might not notice it at all.

If you really want a 240Hz monitor, you should know what you’re sacrificing: viewing angles and color accuracy. MSI is currently restricted to using older TN panel technology with an LED backlight to make it work, a standard FHD 1080p resolution, and a screen size no larger than 27 inches. There’s no HDR, QHD, or a color gamut higher than 72 percent. Currently, the only other display technology that has a faster response time than a TN panel is OLED. But the drawbacks are that it’s expensive to produce, and it’s only typically offered in graphic design monitors.

A gaming monitor with no branding on the front is rare

This is not the first native 240Hz gaming monitor, nor is it the first one with a 1-millisecond response time. It’s also not the first monitor to have those features and Nvidia G-Sync, allowing you to use a compatible GeForce graphics card to avoid screen tearing and have consistent frame rates.

Looking at the competition, Asus’ ROG Swift PG258Q is a similar monitor with the same refresh rate, response time, and G-Sync support, but it costs $548 ($69 more than the Oculux NXG251). Alienware’s AW2518H monitor and Acer’s Predator XB252Q also have the same size, refresh, and response time, but they both cost $499 ($20 more than the MSI’s MSRP). The money saved by buying the MSI could be put toward the necessary GPU that’s capable of pushing 200 fps and up so you can actually take full advantage of what you’re buying.

While it may not be unique, MSI packaged high-end specs into a gaming monitor with no visible branding on the front, which is a rarity among PC gaming products, and it makes it surprisingly more pleasing to look at and play with.

Using the Oculux NXG251 requires some setup to take full advantage of the 240Hz refresh rate. It starts with using a DisplayPort 1.2 cable (HDMI won’t work because it’s capped at 60Hz), then setting the refresh rate on the monitor to 240Hz. To enable 240Hz refresh rate with an Nvidia GPU (on Windows 10), right click on the desktop, select the Nvidia Control Panel, and click on “change resolution.” You’ll see a drop-down list where you can scroll to the top and select the 240Hz option.

It has average color reproduction

For titles that support it, you’ll also have to set the refresh rate within the game’s video settings. Most popular FPS titles like Call of Duty: Black Ops 4, Battlefield V, and Counter-Strike: Global Offensive all have 240Hz refresh options, even if the server side of the game doesn’t. (You’ll still benefit from the smooth, buttery visuals.) If for some reason your game doesn’t support 240Hz, you should be able to select 60Hz, 122Hz, and 144Hz modes, which are further stabilized by G-Sync when used with an Nvidia GPU.

To take full advantage of this monitor, your computer needs to be able to hit high frame rates, preferably the native refresh rate of 240. But that won’t always be possible because some games are too resource-intensive. For example, running Battlefield V with ray tracing enabled at ultra settings takes a huge toll, averaging 70-90 fps. The RTX 2080 TI and Core i7-8700K setup I used for testing just wasn’t powerful enough to run the game anywhere close to the native refresh rate. I would have had just as good an experience with a 144Hz monitor.

This monitor thrives when players have fast reactions and can see every frame of what their opponents are up to. In games where this is important, it feels right at home. I was quickly peeking around corners and anticipating player movements because I was more confident that I could see them. A dimly lit room in BFV that’s suddenly exposed to sunlight looks incredible, even at just 1080p with ray tracing enabled, thanks to the quick turnaround of shades by the 1ms response time.

In a first-person shooter, enemy players wouldn’t rush past in a blur if I was looking down a far corridor. In a MOBA like League of Legends, your champion’s animations and interactions with the environment are so much smoother than they would be on a 60Hz screen and even a 144Hz one. The Oculux NXG251 is capable of really smooth visuals, there’s no doubt about it.

In some games, the differences between 240Hz and 144Hz are minor

However, there are some cases where it’s hard to pick up any differences between 144Hz and 240Hz. When playing Arma 3: Apex, the massive tropical map I was immersed in didn’t seem any different than on a 144Hz screen. The rotor blades of an attack helicopter spinning toward my virtual soldier didn’t look any more fluid or discernible between frames either. In some gameplay scenarios, it doesn’t matter as much.

But what about color accuracy, brightness, and contrast? In person, I can definitely say the Oculux NXG251 is not the most vibrant, sharpest, or most realistic-looking monitor I’ve seen. All it cares about is being fast, for better or worse. Still, the default contrast is acceptable and not too far off from what my Spyder5 screen calibration tool suggested. Lastly, the 400-nit max brightness can sear my eyes, so when I’m not testing for color accuracy, I prefer to leave the NXG251’s brightness at 65 percent, which is more than enough for an office setting, but not bright enough to cause eye strain.

If you can’t live without a fast FHD monitor, get this one

Besides the smooth visuals and decent color reproduction, the Oculux NXG251 is my favorite gaming monitor design by far. On the front, it’s plain with small bezels and no branding whatsoever. (Of course, the joy of being minimalist is short-lived since MSI just moved the G-Sync and MSI gaming logos to the back of the monitor, complete with the usual backlighting options. It only took a few hours for one of my co-workers to put sticky notes on top of the lights because they were a distraction.)

On the left side, there’s a USB 3.0 hub where you can connect up to three devices. They are useful for charging devices in a pinch, but I’m not a fan of wires sticking out of the side of my screen.

Nearly all monitors with a 240Hz refresh rate are using the same type of panel and resolution, but MSI managed to do that with no branding on the front, thinner bezels, and a lower cost than its competitors. These are minor differences on their own, but together, they make the Oculux NXG251 seem like it’s the better package when in use — provided you have a graphics card capable of hitting these kinds of frame rates, of course.

You can now make a Playdate game right in your browser