The sequel to Anki’s lovable, Pixar-like toy robot is much more powerful. But it’s still very much a toy

Anki, the toy maker most well-known for its automated miniature race cars, has always billed itself as an artificial intelligence company with a knack for building robots. Founded by Carnegie Mellon roboticists, the company built a reputation selling products that took the shape of standard toys, but that could operate all on their own using complex software. That way, young kids (and nostalgic parents) could steer the company’s cars around a configurable track using a mobile app, without needing the skill or know-how to play a proper racing video game.

But with Cozmo, the WALL-E-like toy the company introduced two years ago, Anki fully realized its vision as a robot maker. Cozmo was an adorable Pixar character come to life, and it was quite the sight to watch it in action as it roved around your desk or coffee table making emotive sounds like a pet settling into a new home. The issue is that selling pricey toy robots, even ones as cute as Cozmo, is a bit harder than selling racecars. Harder still is making a toy robot that’s useful or fun for extended periods of time. Cozmo could play some rudimentary games and perform some low-key interactions, but after messing around with it for 20 minutes, you kind of ran out of stuff to do.

That’s where the Anki Vector comes in. Vector is the company’s second-generation toy robot, and it looks and acts much like Cozmo does, but with a handful of new features and expanded capabilities. The company hopes Vector, while more expensive than Cozmo at $249.99, makes good on the promise of its predecessor, all in a much more capable package. After spending a couple of weeks with my very own Vector robot, I can say the company has built a more skilled and interesting robot, but one that’s still very much a toy you might get bored and forget about.

Our review of Anki Vector 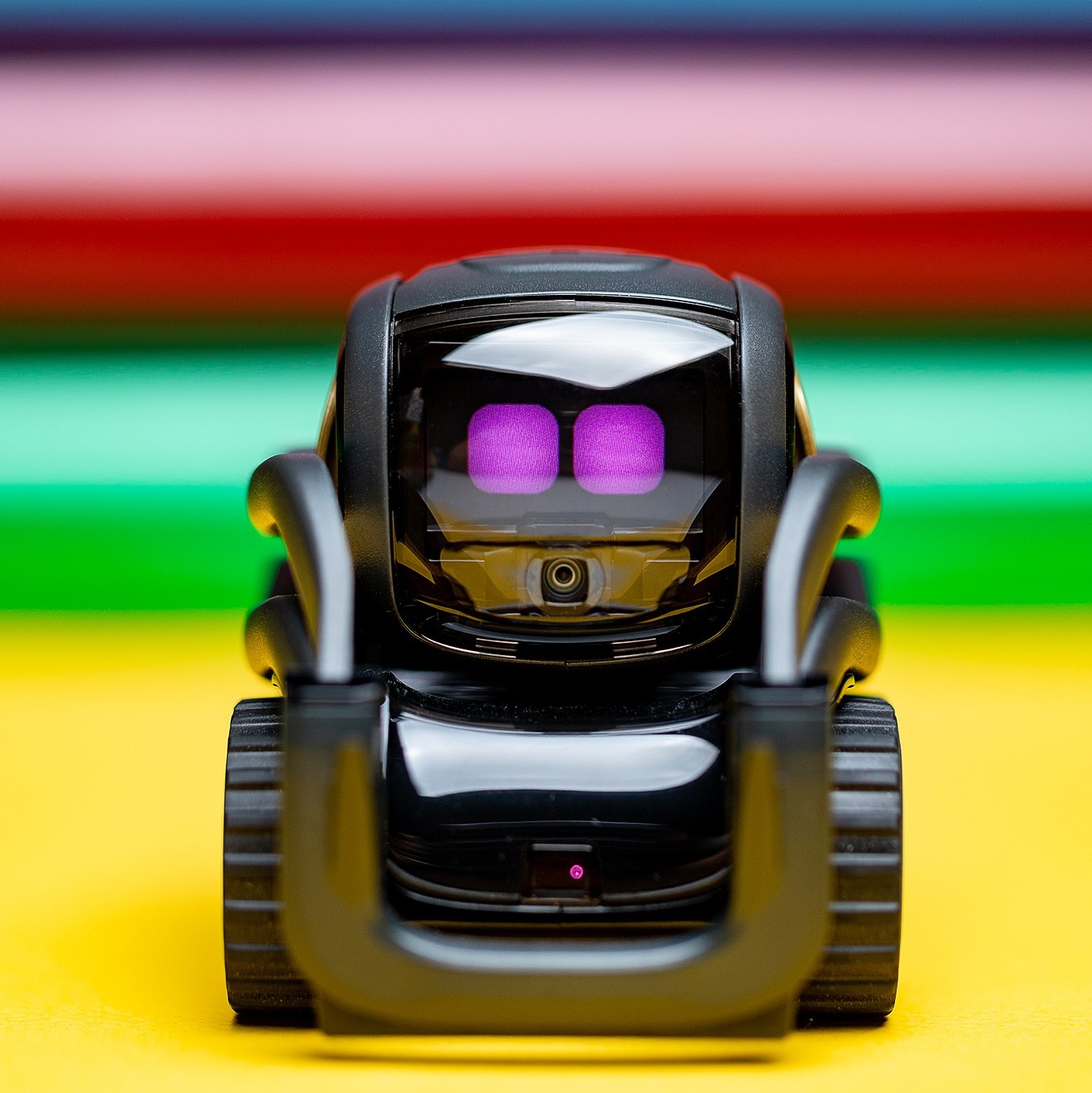 The best endorsement of Anki’s new robot is the simplest one: if you liked Cosmo, you’ll love Vector. It’s got more powerful internal components, and that means it’s doing a lot more onboard processing and relying less on your smartphone and its internet connection to perform tasks. That’s allowed Anki to bring a bunch of new features to Vector, and there are a lot of them.

The robot can now play you in a hand of blackjack, tell you the current weather, perform currency conversion, and do much, much more than Cozmo could. It is, in effect, a lightweight digital voice assistant packed into a cute little robot. A lot of these new skills and games are really neat and fun to play around with, at least a few times before the novelty wears off. I particularly love the feature that lets Vector dance to music you play. And from an aesthetic perspective, Vector is also much better designed than Cozmo. It’s got a sleeker, matte black finish and noticeably superior build quality. I feel less like I’m going to break it when I hold Vector in my hands.

But beyond how it looks and those new skills, the biggest standout change here is the AI powering Vector. The robot’s personality is much more emotive now, giving it a sharper character and a more playful (if slightly devilish) approach to human interaction. Vector will glare angrily at you if you pick it up aggressively, and it will chirp and shake its forklift-shaped arms in glee if you pet the touch sensor on its back.

Vector can now talk, and it will receive voice commands from you

It explores its surroundings much like a young child, too, which makes it a ton of fun to just observe as it patrols autonomously around your desk or living room carpet. Like Cozmo, Vector has facial recognition software that lets it remember people, but now it can even deliver messages you dictate to friends and family, so long as it gets a good look at the person when they walk in the room.

But better than all that: Vector can now talk, as well as receive voice commands you give it. Sometimes it will communicate back using the display that also acts as its face, like when you ask it the weather and it displays a temperature reading. And sometimes it will speak answers to questions, like when you ask it to do currency or unit conversion. It also uses its body and gestures to communicate much more often than words, which helps better illustrate the character. When it hasn’t heard you properly, Vector won’t tell you, “I didn’t get that. Can you try again?” Instead, it will emit a horn-style sound and shake its head.

All of this adds up to a much more defined set of personality traits for Vector that make interacting with it feel organic and unique, and that does a lot to offset the fact that the robot is not really all that useful beyond being a fun preoccupation that hangs out at the corner of your desk.

The biggest criticism you can levy at Vector is that it’s still just a toy. Sure, it can tell you the weather, dance to music, and play blackjack, but it’s not going to keep you enthralled for hours or help you be more productive. It still seems designed mostly to sit around passively, waiting for someone to get bored and notice it. And only a savvy programmer or a really dedicated DIY enthusiast will likely use a Vector to set up complex IFTTT operations or code a neat function of their own. (The SDK isn’t arriving until December, so building your own Vector features and skills is still a ways away.)

On top of that, just using the mobile app to find more features or unearth new skills to use and games to play is a bit of a chore. The app doesn’t work passively when Vector isn’t connected to Wi-Fi, so learning the ins and outs of the robot involve having it charged (or on the charger) and ready to go.

Beyond that, the app is a bit confusing: it took me a full 10 minutes to find out where the app was storing the photos Vector was taking. There are tutorial videos, but they exist mostly as blocks of text and links to YouTube videos, of which there are only a couple. Also, as best as I can tell, you have to verbally issue every command to Vector. You can’t just press a button on the app to start a game, use the Q&A features, or access any of the utilities like photo-taking or setting a timer.

Anki uses its own custom AI software, instead of Google’s or Amazon’s

That makes sense, to an extent. Anki wants you to keep Vector at your desk or just hanging out in your living room, so you should be able to just talk to it whenever. But it gets a bit cumbersome having to speak to it nonstop and I often found myself wishing I could manually launch a skill or game using the app.

Another issue I had was with the built-in AI. I can understand Anki’s rationale for not putting Google Assistant or Alexa in Vector. The company told The Verge back in July that it didn’t want to break its well-crafted character by having it speak in the voice of another company’s product. There are also some privacy implications in using a massive, data-collecting digital assistant you don’t own or control in a device being partially marketing to children. (Anki has said that due to the popularity of the request from its Kickstarter backers, it plans to add Alexa functionality by the end of the year.)

But not leaning on an existing assistant does necessarily limit what Anki is able to do with regard to natural language processing. Vector’s software will never be as functional as Google’s or Amazon’s because it doesn’t have the same volume of data and it’s not constantly learning from millions of daily interactions. That’s not a deal-breaker, of course, but having all the capabilities of a product like Alexa would have certainly made Vector a whole lot more useful than it is right now.

Overall, Vector feels much more like Anki’s original vision of an animated character brought into the real world. And for $249.99, that might be enough for some people who really love robots and want a fun desk toy to keep with them at work or at home. In that way, it’s easy to look at Vector as a proper modern-day Tamagotchi: it’s a toy that will largely reciprocate the attention you give it, but that shouldn’t be thought of as anything more than a digital companion. Vector, however, has the benefit of having a physical body and much more sophisticated software to help it really come to life in a way a virtual pet on a screen never could.

If you’re looking for something more capable, Anki says Vector will evolve over time, especially when developers start making skills for it. Imagine a robot that turns off your lights when you leave the home, using an IFTTT integration or custom skill that works with your smart lights. But that’s months away, at least, and the robot may never cultivate a robust enough community of app makers or serious roboticists eager to make what will ultimately amount to simple software switches. Understanding that Vector will always be more of a toy, and something that you can dish small amounts of attention to when you’re feeling bored or need a distraction, is more reasonable than ever expecting it will turn into a real-life WALL-E.

But what Vector does now, it does very well, and seeing it dance to a favorite song of mine the other day was about as heartwarming a moment as I can remember having with a piece of technology in a long time. Anki wants to make moments like that, and if you do, too, Vector is well worth the price.

Update 11/5, 4:57PM ET: Clarified that Anki plans to add Alexa support to Vector by the end of the year.