It’s not often that a new gadget gets announced and I don’t immediately want to get my hands on it. I am an extreme early adopter, both by profession and by inclination. But when Facebook’s new Portal and Portal Plus were announced a month ago, my response was a firm “no thanks.” And I’m not alone: after a year of data privacy scandals, many people’s first reaction to the Portal, a smart display device that has an always-listening microphone and always-watching camera, landed somewhere between hesitation and revulsion.

The $199 Portal and the larger, $349 Portal Plus, are not the first smart displays of their kind, and both Amazon and Google have similar products already in the market. But while the Amazon Echo Show and Google’s Assistant-powered Smart Displays are designed to perform a whole host of tasks, from controlling smart home gadgets to playing video, the Portal has a near-singular focus: to place video calls using Facebook Messenger to other Facebook Messenger users.

For that purpose, the Portal works very well. I used both models for the past week to make calls across the office — and across the country — and the Portal provided a better experience than any other smart display I’ve used. It also worked better than a smartphone or tablet for making video calls, which I can’t say for the Echo Show or Lenovo Smart Display. As a general-purpose smart display, however, the Portal lags far behind the competition.

While the Portal excels in its intended role as a video phone for the modern era, I remain deeply uncomfortable with the idea of a Facebook-connected camera in my home. 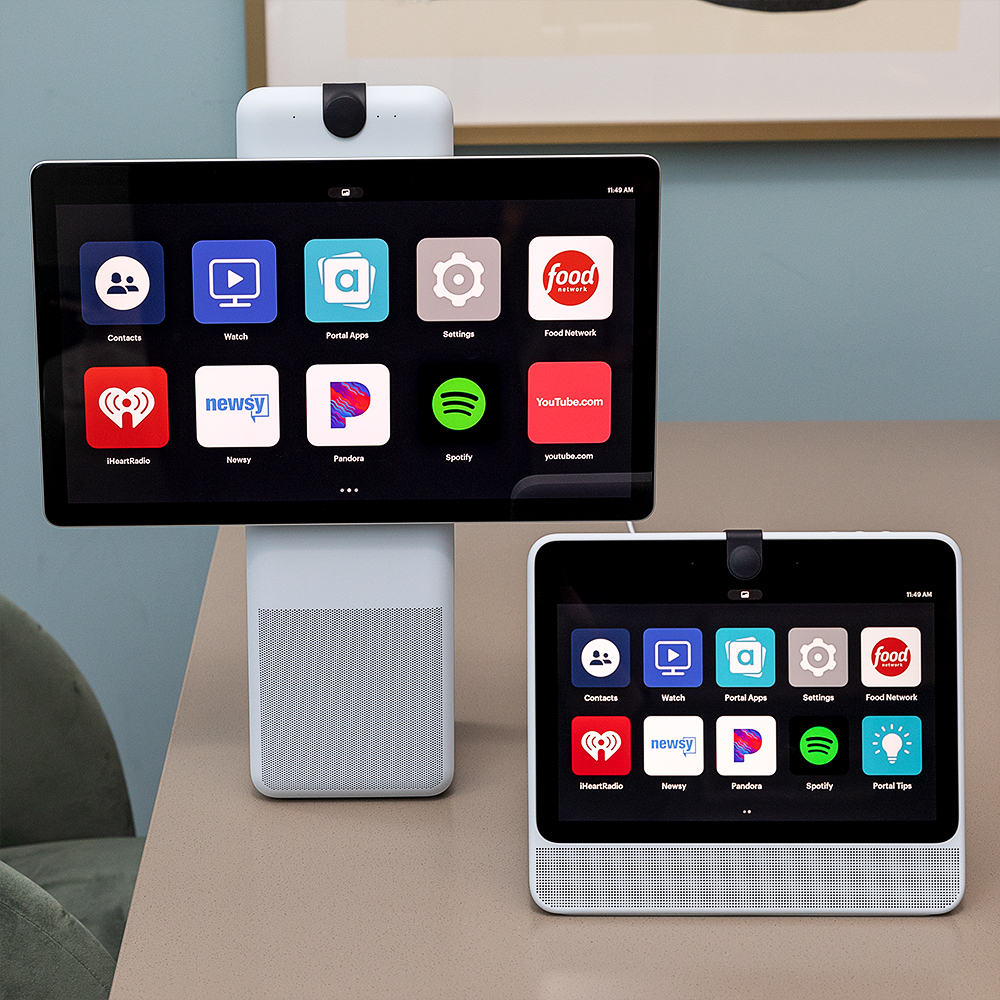 Both the 10.1-inch Portal and the massive 15.6-inch Portal Plus have modern designs that wouldn’t look out of place in a trendy home. The smaller model looks very similar to Amazon’s Echo Show, while the Plus reminds me of a in-store kiosk you’d use to place an order for a Big Mac. Both are put together rather well, with quality plastic materials, bright, responsive touchscreens, and loud speakers that can easily fill a medium to large room with music.

Not only does the Portal Plus have a larger display and louder speakers, it has a trick that the smaller model can’t pull off: its screen rotates 90 degrees to switch from landscape to portrait orientation. The hinge is smooth, yet stable, and it takes just a single finger to switch orientations. It’s probably my favorite hardware detail on the product. These are surprisingly nice pieces of hardware for a first-generation product; the biggest knock against both models is that they take up a lot of space, especially the Portal Plus.

Of course, aside from the screen, the Portal’s camera and microphones are the main things you’ll spend time interacting with. Both models use the same camera and microphone systems: a four-mic array with 360-degree beamforming input and a 12-megapixel camera with a 140-degree field of view and up to 8x digital zoom. This setup lets the Portal see and hear you no matter where you move around in the room.

Facebook’s intelligent, auto-framing camera is what sets it apart from other video calling devices

That’s really the big differentiator for the Portal versus other smart displays. Though the Amazon and Google devices have similar far-field microphone arrays, their cameras are not nearly as good as the Portal’s. While the Portal camera is technically fixed in place, Facebook has developed clever software that is able to identify human shapes (the company tells me it is not using face tracking) and reframe the video view automatically. As I move around the room, the camera “follows” me, as if it had the ability to move and zoom its lens. The Amazon Echo Show has a single fixed position for its camera, and it’s often not ideal.

This automatic framing, which Facebook calls “Smart Camera,” makes every video call more comfortable to participate in. I don’t have to worry that I’m standing in the right spot for the other person to see me — I can just move about freely and know that they will be able to see and hear me without issue. It’s also easier to use than a smartphone or tablet, where I have to hold the thing in place the whole time and essentially be the camera person for my own video call. The Portal does away with all of those hassles.

The sound and video quality on Portal calls is also much better than I’m used to from Facebook Messenger calls on mobile devices, or even other services like Apple’s FaceTime or the corporate Zoom video conferences we use every day at The Verge. The picture is sharp, bright, with high frame rates, and the audio is clear and easy to hear without anyone having to raise their voice. Facebook says the Portal creates “virtual microphones” for every person on a call, and then it uses the beamforming tech in its physical microphones to home in on their voice.

Facebook argues that all of these features make having a conversation on the Portal more natural than standard video calls, but I don’t think it quite goes that far. A video call is still a video call, and while using the Portal for video calling is certainly more comfortable than a phone or other smart displays, it doesn’t feel like the other people on the line are actually in the room, hanging out with me.

It doesn’t truly feel like you’re in the same room as the other person, despite Facebook’s claims

The Portal has other features that are designed to bring both parties closer together. It can stream music from Spotify (provided you have a Premium account), and you can play a song during a video call that both parties can hear, with individual volume controls. Unfortunately, this only works for Portal to Portal calls and not when you use the Portal to call someone with a phone.

The Portal supports Messenger’s augmented reality masks, which are limited in number, but fun to use. Finally, there’s an AR storytime mode that includes a few children’s stories and lets you read along with animations, sound effects, and music. This is something I could see parents that travel a lot using to call back home and read a bedtime story to their kids with, but it only works if you’re calling from a Portal, not from a mobile device, making this use case unlikely.

Outside of video calling, the Portal’s functionality is rather limited. It can display pictures from your Facebook account when it isn’t being actively used. It can stream music from Spotify, Pandora, or iHeartRadio. It can stream video from an extremely limited number of sources, including Facebook’s floundering Watch service, Newsy’s series of short news clips, and the Food Network, which offers a bunch of Tasty knockoff videos in a square format that doesn’t fill the screen. There’s also a very rudimentary YouTube experience, which consists of a clumsy browser view of the YouTube smart TV app that’s difficult to navigate by touch and can’t work with voice controls.

The Portal does not have Netflix, HBO, Hulu, YouTube TV, Amazon Prime Video, or any other video service you can think of. You cannot cast content from your phone to it, nor does it have a web browser for looking up recipes or other information. Hilariously, you can’t even browse your Facebook News Feed on it. Facebook says it plans to bring more video content to the Portal in the future, but at launch, it’s woefully unequipped.

The Portal can’t play video from many popular sources

Facebook has built in some rudimentary voice controls, so you can say “Hey Portal” to initiate a call or adjust the volume. But you also have the option of using Alexa, so the Portal basically becomes the largest Echo speaker ever made. A handful of Alexa skills, such as weather, will make use of the display, but the Portal’s version of Alexa is not as feature-rich or complete as what you get on the Echo Show.

All of these limitations make it really hard for the Portal to justify its place in your home. It’s a big device that does basically two things: make Facebook calls and play Spotify. That’s not a lot of functionality for something that takes up a lot of shelf or counter space and occupies a precious power outlet all the time.

But the bigger issue most people will have with the Portal is that it’s an always-watching and always-listening device connected to Facebook. The device’s release was reportedly delayed for several months in the wake of the Cambridge Analytica scandal, in which Facebook was pilloried for failing to put strict controls on data shared with third-party developers. And just as Facebook prepared to release the device, the company revealed that a new data breach had compromised the accounts of more than 50 million people.

Rafa Camargo, Facebook’s vice president overseeing the Portal’s development, says the company was conscious of the privacy concerns from the beginning when developing the product. He says the company can’t listen in to Facebook Messenger calls because they are encrypted, and that the only time the Portal broadcasts audio and video feeds over the internet is when you’re actively on a call.

A mute button on top of the device disables the camera and microphone functionality, and Facebook also includes a little plastic cover for the camera to block it when you aren’t using it. The device does not record or store your conversations — all of the video chats are live streamed — and its Smart Camera feature that identifies subjects in a call runs locally on the Portal and does not use Facebook’s face detection features.

Despite Facebook’s efforts, the Portal doesn’t do enough to justify itself

Facebook is saying all the right things about privacy, but I’m not sure that will be enough to convince the skeptics. There’s already been mixed messaging from Facebook on whether it will be able to use data from the Portal for advertising purposes, so people are right to be skeptical.

Beyond that, unless you are a heavy user of Facebook’s Messenger calling, the Portal doesn’t currently do enough to justify its existence.