Share All sharing options for: LG Watch W7 review: two hands too many

Despite starting out with a variety of different designs and styles, Google’s smartwatch platform has now coalesced around a consistent look, no matter the manufacturer. Most Wear OS watches now look very similar. The typical Wear OS design has a thick, round shape, three buttons on the side, standard lugs for interchangeable straps, and the ability to always have the time displayed. If you’ve seen one Wear OS watch, you’ve basically seen them all.

LG’s W7 is no different in these respects; it’s a chunky, round watch with three buttons on the side and standard interchangeable straps. It looks like a cheap version of a mechanical chronograph, even though at $449.99, it’s really not cheap at all. But the W7 does try to stand out in the crowd with one unique feature: in addition to the standard round touchscreen found on every Wear OS watch, the W7 has actual analog hands to display the time and other functions.

The appeal of this type of design is twofold: the screen doesn’t have to always be on to display the time, and the watch has a more traditional appearance on the wrist. Nobody can really tell that you’re wearing a connected watch until you start touching the screen.

The W7 is not the first smartwatch to attempt to blend analog timekeeping with a touchscreen, but it is the first one to run Wear OS. And, as is often the issue with firsts, it has more than a few growing pains.

Our review of LG Watch W7 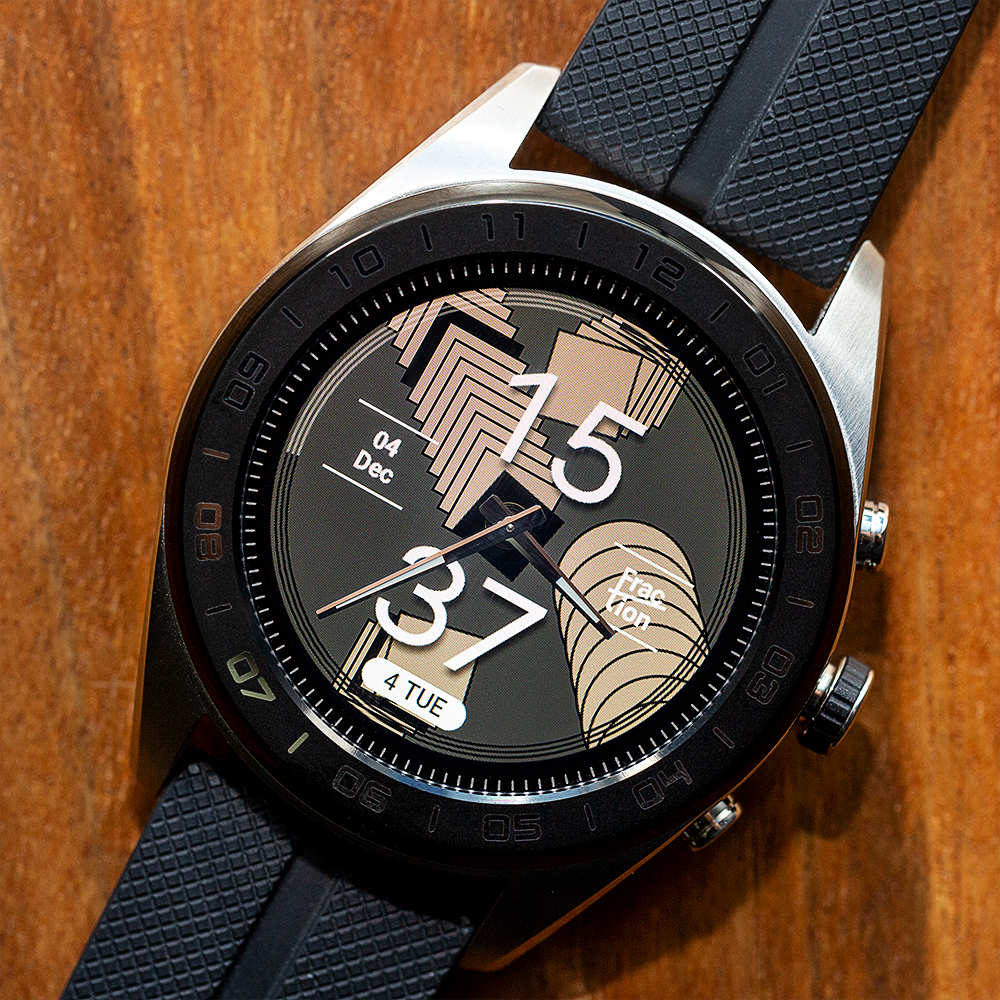 In order to produce the W7, LG had to make several compromises. The already small 1.2-inch LCD display has a hole punched directly in the middle of it to allow for the mechanical hands to be mounted. To make room for the analog movement inside the watch case, LG had to ditch GPS, a heart rate monitor, and NFC, which are all increasingly common smartwatch features. The three-year development cycle for the W7 forced LG to use Qualcomm’s old Snapdragon 2100 processor instead of the new 3100 chip that started showing up in watches this fall. And even with those sacrifices, the W7 is still a big, chunky watch that looks ridiculous on smaller wrists.

Further adjustments and sacrifices had to be made to the watch’s software. LG designed a handful of watchfaces that work around the hole in the middle of the display, but since third-party watchfaces aren’t aware of the W7’s analog hands, LG’s faces are the only ones that work well on this watch. The app selector was redesigned from a vertical list to a circular wheel of app icons to make better use of the available display space. Perhaps the most significant change is found in the top button, which moves the analog hands to the 9 and 3 hour indicators temporarily when you press and hold it in order to make reading any text that might be blocked by them possible.

All of these things make Wear OS a little more annoying to use than usual. I can’t use my preferred watchface with the W7 and must settle for LG’s designs. I can’t easily read incoming messages without using my free hand to push and hold a button on the side of the watch. I can’t pay for my morning coffee with the W7, like I can do with virtually every other smartwatch you can buy in 2018. And I can’t use the W7 for fitness tracking other than the simplest of step counting.

The W7 can’t do many things that other smartwatches can

There are some positives with the W7, but none of them are strong enough to make it truly desirable over other Wear OS watches. Because the analog hands negate the need for an always-on display, the W7 can easily last a full day between charges. They also make it very easy to read the time in bright sunlight, which other smartwatches sometimes struggle to do. The charging puck uses a USB-C connector, so I can use the same cable to charge it as my smartphone or laptop when I’m traveling. The stainless steel lugs and quick-release pins on the included rubber strap make it easy to switch to a different band. LG developed a set of utilities, such as a compass, timer, and stopwatch, that make creative use of the analog hands in fun ways.

But the W7’s battery life isn’t as good as Samsung’s Gear Watch or any generation of the Apple Watch, and it’s not any different from many other Wear OS watches that rely on an always-on display to tell the time. Like watches that use the Snapdragon 3100, the W7 does have a “time-only” mode that can be used when the battery gets very low, but if you’re relying on that often, I have to ask why you’re wearing a smartwatch to begin with.

LG seems to be aware of the W7’s shortcomings, and it has slashed the price by $200 for the rest of the year, even though the watch just started shipping late last month. That price cut helps stomach the problems with the W7, but with so many other Wear OS options available for even less, it’s tough to see why anyone would go for LG’s offering.

I like what LG is attempting to do with the W7. I much prefer wearing a traditional-looking watch over a gadgety smartwatch, and the W7 is perhaps the most traditional-looking smartwatch I’ve ever tested. But if I’m going to commit to living with a smartwatch on my wrist and deal with charging it every day, I want it to do all of the things I expect a smartwatch to do, and I don’t want to put up with the compromises the W7’s design forces.