Better gaming on the go

By Stefan Etienne@StefanEtienne Feb 13, 2018, 8:30am EST
Photography by Amelia Holowaty Krales / The Verge

Nvidia’s Max-Q program seems to be the answer to that problem. It basically takes underclocked versions of desktop GPUs and shoves them into laptops that are considerably thinner and lighter than the average gaming rig. One of the first Max-Q models was the Asus Zephyrus, which had great gaming performance that was stymied by abysmal battery life and awkward keyboard placement. Now, here’s the Origin EVO15-S, which offers a more traditional design that should make it suitable for more than just gaming.

I’ll get straight to it: the EVO15-S has a few notable flaws, but otherwise is the best of the six Max-Q systems on the market. Of course, all this power comes with the aesthetic of a “lightweight laptop”, weighing 5.2 pounds. That may be considered hefty by 2018 laptop standards, but remember there’s a totally non-standard Nvidia GTX 1070 that can handle basically any gaming demand humming away in there.

Origin is a boutique manufacturer that builds most of its systems to order, so you can’t just walk into a Best Buy and grab one. The starting price for the EVO15-S is $1,615, but as reviewed, this unit retails for $2,136. This is a well-equipped machine, no matter how you spin it.

In order to fit in a laptop-size chassis, a Max-Q GTX 1070 operates 10-15 percent slower than a “real” desktop GTX 1070. The speed boost is also lower than the desktop card, but the memory clock remains the same. Think of the Max-Q variant of something like a desktop GTX 1060 Ti — still top-tier, but not top-end. But even though it’s underclocked, the 1070 in this machine is fully gaming ready, including VR.

Similarly, a game like PUBG is light work, averaging 90-120fps. However, Arma 3: Apex in all of its DirectX 12 glory, with hundreds of square kilometers of world takes the EVO15-S down a few notches to high settings, but maintains equally smooth gameplay.

And Destiny 2 runs like butter on max settings, too. It’s harder to find someone else playing Destiny 2 on a PC than it is to run it on this machine. Recording on top of these games with Twitch or GeForce Experience doesn’t hurt performance much either.

There is something odd with the EVO15-S screen, however. It has a 120Hz refresh rate, which is great for smooth gameplay and detail, but unlike the other Max-Q laptops, it lacks G-Sync. Another Nvidia technology, it prevents screen tear and removes the need for V-Sync, which consumes valuable processing power.

Although screen tearing shouldn’t be too big a concern for EVO15-S users, 1080p HD and a GTX 1070 are probably the safest means of getting maximum graphics output with minimum cause for graphics issues.

But still, l would’ve preferred having G-Sync on the native display. However, it’s still possible to use the tech on the EVO15-S if you’re plugged into a G-Sync monitor where the results would be more apparent due to a larger screen.

Narrow viewing angles are odd for an IPS display

Another issue with the IPS screen used on the EVO15-S is its very narrow viewing angles. It’s more annoying than anything else. For the screen to appear uniformly backlit and vibrant, you have to look at it directly, which is the opposite of what I’d expect on a 120Hz matte display.

Compared to other Max-Q systems, the EVO15-S is not the most powerful you can get. The ASUS Zephyrus I mentioned earlier has a GTX 1080 (Max-Q) with slightly better gaming performance. It does cost more than the EVO15-S, and is set back by awkward keyboard placement and below two-hour battery life.

If compared to a traditional gaming laptop with similar specs and price — say, a loaded Razer Blade 14 — then the EVO15-S wins in processor, graphics and storage options. The Blade 14 wins in portability, keyboard quality and Chroma backlighting, as well as upgradeability via the Razer Core.

So the EVO15-S can game, which is wonderful because it already accomplishes its primary goal. Can it also be a primary machine, suitable for productivity and editing? Well, yes and no.

From a design perspective, the EVO15-S doesn’t stand out like other loud, gaudy gaming laptops. Reminiscent of the gunmetal Razer Blade, the EVO15-S embraces the metal body aesthetics, with dozens of slits machined underneath for increased airflow. While this does help in keeping it mostly cool, the uppermost left region of the keyboard — near the side fan vent — gets noticeably warm.

I realize that 5.2 pounds might still be a lot for a 15-inch laptop in 2018, but I can’t stress enough that nearly identical specs (including processor, screen and GPU) exist in another Max-Q laptop, Gigabyte’s Aero 15X. The Aero weighs just 4.62 pounds, but when compared to the armored build quality of the EVO15-S, there’s little left to praise. In other words, it’s worth bulking up your back muscles.

This isn’t the most exciting or beautiful laptop to look at, but its build integrity is strong. No flexible keyboard, palm rest or flimsy screen hinges. On the lid of the laptop, a light-up Origin logo is the finishing touch.

It’s almost silly to have to say this, but I didn’t need to fight the system writing this review. The keyboard is not mechanical, but is backlit in three partitions. Even better, colors blend into each other between lighting zones, so you can create unusual color combinations. Razer’s Chroma system offers far more customization options, as well as official support for a handful of games, including League of Legends, but Origin’s is still customizable and fun without being tacky.

The touchpad is proportional and well-placed in relation to the keyboard. Most importantly it’s smooth to use thanks to its use of Windows 10’s Precision drivers.

As for the speakers — unfortunately — they’re the worst I’ve heard in years. That’s saying something. They produce a tinny sound with almost concert-hall feedback. There’s no bass or warmth regardless if you’re listening to music, games, or video. Most gamers won’t care, instead relying on headsets and Bluetooth connections. But, the least a laptop of this caliber (and price) deserves is some decent speakers.

However, where the EVO15-S loses ground in audio, it makes up for it in ports — there’s even a full-size SD card slot! Everything you need adorns the machine’s sides: two DisplayPorts, three USB 3.0 ports, two USB-C ports, one HDMI, a Kensington lock slot, SIM card slot, Ethernet port, a duo of audio-out and microphone ports, and of course, the power jack. The only notable omission is support for charging and Thunderbolt 3 via the USB-C ports, which means that you won’t be able to use a more powerful external GPU in the future.

On the note of security, you get a Windows Hello fingerprint sensor built into the upper left corner of the touchpad. It’s fairly accurate on the first try, using both my left and right index fingers. A security measure beyond just a password or PIN is always welcome in my book.

What has plagued gaming laptops the most is their lack of battery life. Origin advertises around five hours of battery life, but in testing, the EVO15-S doesn’t hit anything more than 3 hours of non-gaming use. Despite that, it’s an improvement over the abysmal 1.5 to 2 hours seen on other Max-Q systems.

Three hours isn’t going to entice a mobile power user. The EVO15-S would be much more useful on the go without the need to seek out a power outlet. But, you’ll definitely need to carry around the power adapter, which is large, but fortunately not exorbitantly heavy.

You’ll definitely need to carry around the power adapter

Besides all the PCs that Origin builds, they pride themselves on customer service. This would be interesting to test, if something went wrong. In my case, it was being unable to change screen brightness. My first and only use of Origin support downloads resulted in downloading the latest driver software for the keyboard. A quick restart later and everything worked.

Thanks to its combination of processing power and usability, the EVO15-S is the best Max-Q laptop, hands down. The journey for the mobile PC gamer looking for a machine now diverges into three paths: get a tank-like laptop that can play all the games from Minecraft to Star Citizen, a lightweight laptop with an external GPU enclosure (Razer Blade Stealth) or finally, one that can do both: easy to transport and powerful, but at a higher cost.

The EVO15-S fits perfectly into the last slot: it’s portable, powerful, reliable, and port-friendly. If you need most of the power found in a gaming desktop and still want something that’s portable, then you just found your new gaming laptop.

Our review of Origin EVO15-S 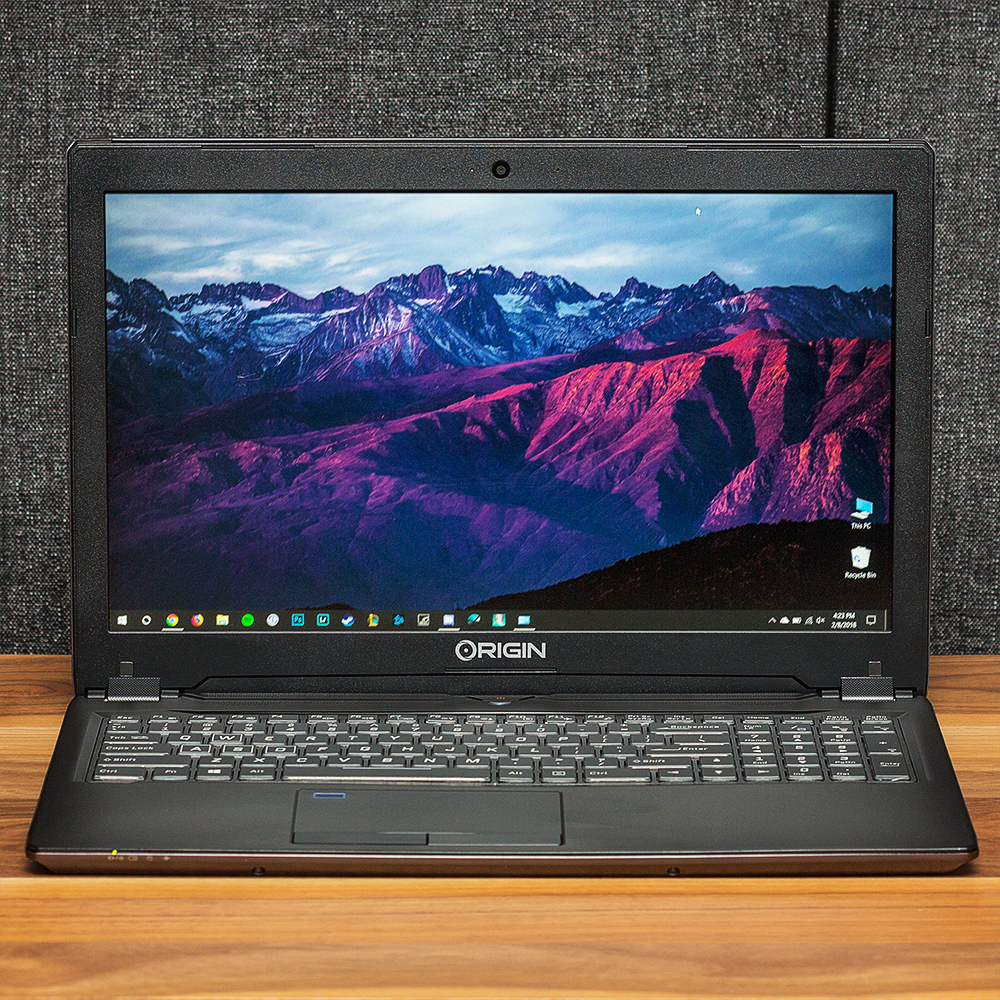 Ubisoft to shut down multiplayer for older games, including Assassin’s Creed Brotherhood