Samsung Notebook 9 Pen review: too light for its own good

By Dan Seifert@dcseifert Feb 15, 2018, 9:00am EST
Photography by Amelia Holowaty Krales / The Verge

Share All sharing options for: Samsung Notebook 9 Pen review: too light for its own good

What if you had a fancy new metal material that could be used to make a laptop exceptionally light and portable? What if that same material didn’t feel or look like metal at all, but instead looked and felt like a cheap, painted plastic? Could you get away with charging $1,400 for a laptop that uses it?

Those are the questions I’ve been asking as I’ve been testing the new Samsung Notebook 9 Pen for the past couple of weeks. The $1,399 Notebook 9 Pen is a 13-inch convertible 2-in-1 laptop that’s one of the lightest computers I’ve ever tested. It’s made from Samsung’s proprietary magnesium alloy called Metal 12, finished with a microarc oxidation process for durability. It’s powered by an eighth-generation Intel Core i7 processor and comes equipped with an S Pen stylus that conveniently hides away in the computer’s base. Compared to other 2-in-1 computers, the Notebook 9 Pen has a lot going for it, on paper at least.

First impressions of a new gadget are important, and, unfortunately for Samsung, the Notebook 9 Pen does not provide a very nice one. It looks like a budget computer, from its rounded edges to its dull silver finish. Most of my colleagues assumed it was a $400 Chromebook when they saw me using it. On top of that, it feels like a budget computer: the top and bottom flex when you pick it up and the keyboard’s slippery, plasticky keys clack under your fingers. This does not look or feel like a computer that costs $1,400.

The upside of this is that the Notebook 9 Pen is ridiculously light, at just 2.2 lbs. That’s considerably lighter than other 13-inch laptops, 2-in-1s or not. It makes the Samsung easy to carry around and move from spot to spot — it really feels like a more portable computer than other laptops in this size class. But I’m not sure that the half-pound of weight saved is worth the much worse physical appearance and feel of this computer.

As it’s a 2-in-1, the Notebook 9 Pen’s display can be flipped around into various tablet modes. Unfortunately, the extreme lightness of the base means that you can’t open the computer with one hand — it’s a two-hand operation to separate the two halves. And though the 9 Pen is very light, it’s still clumsy to use as a tablet in your hand or lap, and is much better suited for use on a table or seat tray.

The 13.3-inch display has a 1080p resolution and 450 nits of brightness, both of which are perfectly adequate for this size and type of computer. My only complaint is that it has a 16:9 aspect ratio — after using computers like Microsoft’s Surface line or the Google Pixelbook, which have 3:2 aspect displays, the 9 Pen’s feels like I’m looking through a cramped tunnel.

The keyboard layout is comfortable to use, though as I mentioned before, the keys are clacky and plasticky, which don’t make them very pleasant to type on. On top of that, there are some weird quirks: the function keys are set to F1-F12 by default, but if you push the Fn Lock button to use them for brightness, volume, and other more useful toggles, the Escape key stops working. The keyboard is backlit, with varying levels of brightness, but instead of a clean white color, the keys glow a sickly green.

I don’t have any complaints with the 9 Pen’s trackpad: it’s large enough, smooth enough, and uses Microsoft’s Windows Precision drivers, so it supports all of the Windows 10 gestures I look for.

For ports, the Notebook 9 Pen has a single USB-A port, a single USB-C port, HDMI, a headphone jack, and a microSD card slot. Though the computer can be charged via the USB-C port, Samsung’s included charger uses a barrel plug, which is a missed opportunity to have a charger that can handle both this laptop and a modern smartphone. The USB-C port does not support Thunderbolt 3, either, but it can be used to drive a 4K external display.

The Notebook 9 Pen is the only computer I’ve ever tested to offer both facial and fingerprint login options, and I’m not entirely sure why it does. Both are quick and work well, but the facial recognition system is the easier one to use, and I didn’t use the fingerprint scanner outside of making sure it works.

Matching the aesthetic of the rest of the computer, the 9 Pen’s stylus is plastic. It’s basically the same S Pen that comes with the Galaxy Note 8 smartphone, with 4,096 levels of pressure sensitivity, a 0.7mm tip, and built-in tilt detection. But while it’s fine for the occasional doodle, signing of a document, or marking up an image, the S Pen is too thin and small to comfortably use for a lot of note-taking or writing. I love that Samsung engineers a place for the stylus to live inside the 9 Pen’s base when you’re not using it, but I wish that Samsung would also put some time into making the pen larger and more comfortable to use with a device of this size.

Though the Notebook 9 Pen’s design and materials belie its premium price, its internal components justify it. The eighth-generation Core i7 processor is just as powerful and snappy here as it is on other eighth-gen computers, and you can outfit the 9 Pen with up to 16GB of RAM and 512GB of storage. I’ve been using a model with 8GB of RAM and 256GB of storage, and it has handled my daily workflow of lots of browser tabs, Slack, email, writing, social media, video watching, and more without skipping a beat. You won’t be able to use this computer for gaming, as it relies on Intel’s integrated graphics, but it’s certainly powerful enough for productivity work.

The 9 Pen is not a fanless computer, but it still runs quietly and coolly, with the fans occasionally spinning up, but never becoming so loud that they are noticeable in an office setting.

Sadly, I don’t have the same praise for the 9 Pen’s battery life. I’ve only been able to average four to five hours of use away from a charger, which is only half of a workday and downright unacceptable for a computer of this price in 2018. In fact, despite all of my complaints with the 9 Pen’s hardware and design, I’d say that the worst thing about it is the poor battery life.

The Notebook 9 Pen also comes loaded with software from Samsung, plus nagware like McAfee LiveSafe. There is a utility to take advantage of the S Pen (a menu pops open automatically when you remove the pen from its slot), but I wish that Samsung would just use the pen features that Microsoft builds into Windows 10 natively, since Samsung’s not adding anything more to the experience. Samsung is not alone in loading its PCs up with unwanted software, but it certainly doesn’t contribute to making the 9 Pen feel like the premium machine it’s priced like.

Despite the Notebook 9 Pen’s solid performance, quality display, and extremely light design, I can’t get over its cheap feeling finish and terrible battery life. On top of that, the weird keyboard quirks and bloatware just make this feel like a machine that would be overpriced at $1,000, much less at the $1,400 it retails for.

If you want a good 2-in-1 PC, or just a good laptop in general, my recommendations remain Microsoft’s Surface Laptop or HP’s Spectre x360, both of which have much nicer design and build quality, while weighing just a little bit more.

Our review of Samsung Notebook 9 Pen 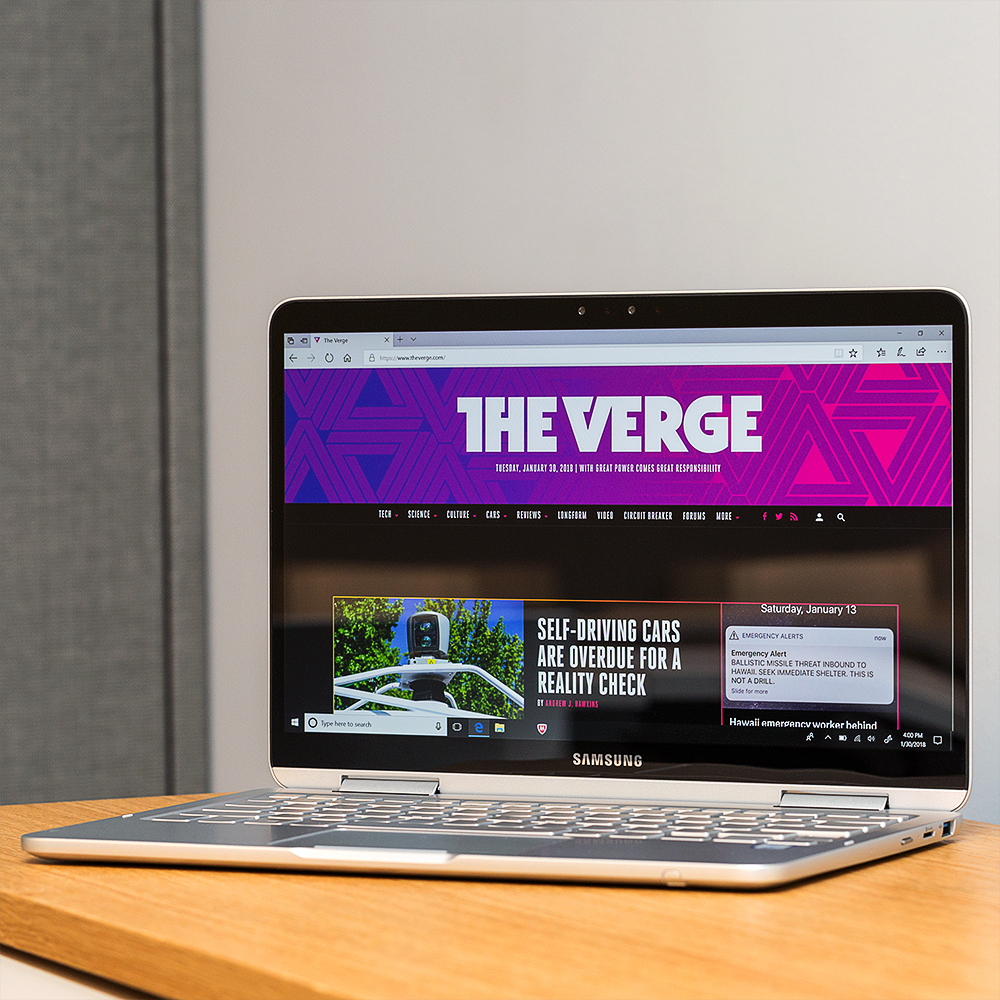