“What if Chromebooks were bigger?” That’s the question that the Acer Chromebook 15 line has tried to answer, as the only 15-inch sized Chromebook on the market. That laptop was ultimately outclassed by more powerful or versatile Chromebooks, but Acer has revised the Chromebook 15 with a more premium aluminum design and better battery life.

Unfortunately, while the updated Chromebook 15 is still the biggest Chromebook around, in this case, bigger doesn’t mean better.

There are high-end Chromebooks out there. The Chromebook 15 isn’t one of them.

There are high-end Chromebooks out there, with the latest Intel processors, memory, and high-resolution screens that can rival the best Windows and Apple laptops on the market. The Chromebook 15 — with its $399 starting price tag — isn’t one of them. It’s got a 1.1GHz quad-core Intel Pentium processor, 4GB of RAM, and 32GB of internal storage.

Acer actually bumped the price up significantly with the 2017 refresh, as previous versions of the Chromebook 15 started at $299, meaning that you’re already paying a relatively large premium for the metal case, extra battery, and bumped up processor.

One of the biggest changes to the new Chromebook 15 is the aluminum case, where the lid and palm rests are now made from metal, instead of plastic (the bottom of the laptop doesn’t get the same treatment and is a soft, rubber-coated plastic instead). The computer is weirdly weighted, too — placing it down on a desk and trying to open the lid usually results in lifting up the entire laptop. And the lack of any sort of cut-out notch on the base makes it oddly difficult to get a grip on the lid to open it. On the other hand, the plastic components give it a lighter heft than you’d expect at just under four pounds, making it easy to carry around.

The screen itself is dull both in brightness and color, but again: you get what you pay for here

As for the screen — the purported star of this show here — it’s just average. As promised, it’s a 15.6-inch display, complete with the addition of a touchscreen. But resolution is still stuck at 1080p, and stretching the now-paltry 1920 x 1080 pixels across such a comparatively large screen makes text look almost blurry and rough around the edges. This is in part due to the fact that I’ve gotten used to using higher-resolution screens on more expensive and better laptops, phones, and tablets, but that doesn’t make it any harder to go back. Adding to the low resolution, the screen itself is dull both in brightness and color, but again: you get what you pay for here.

Connectivity is a strong suit for the Chromebook 15, with two USB-C ports (both of which can charge the laptop), two USB 3.0 ports, and a MicroSD card slot, which puts dramatically more expensive laptops like Apple’s MacBook Pro line or Microsoft’s Surface Laptop to shame.

The trackpad on the Chromebook 15 is also disappointing. Chrome OS offers few options for adjusting sensitivity or trackpad settings, and what’s there is just not very good. Using the mouse just feels awkward and inaccurate, making things as basic as highlighting text feel like a chore. The drivers for detecting multitouch for right click are particularly bad — I don’t think that, in the week-plus that I tested the Chromebook 15, I ever managed to get it to trigger on my first try.

The keyboard fairs a bit better, doing a reasonable facsimile of Apple’s MacBook Pro keyboard, although the keys are a bit softer and squishier, which adds to the cheap feel of the laptop.

The biggest problem with the Chromebook 15 is the RAM, or lack thereof. The model I tested has only 4GB of memory to go around, and with the insatiable demand of Google Chrome (i.e., the only thing you can actually run on a Chromebook), there just simply isn’t enough memory for multitasking properly. My usual workload — pared down to roughly four Chrome windows, Tweetdeck, Slack, and some music in the background — was enough to bring the Chromebook 15 to its knees. According to a Chrome OS system tool, I’m currently using roughly 98 percent of available memory, which means that everything just runs kind of sluggish. Cut down tasks to, say, a single tab for watching Netflix or working on an essay in Google Docs, and the experience improves, but the bar needs to be higher here than what the Chromebook 15 currently can do.

The Pentium N4200 processor also struggled a bit when there was too much going on from a multitasking perspective. For less pressing tasks, the Chromebook 15 was fine, but using it still felt in many ways like trying to run with weights around my ankles, and when I had to handle more time-sensitive projects — even ones that can be performed entirely within Chrome — I ended up switching back to my regular MacBook Pro.

Some of my biggest problems with the Chromebook 15 are also just inherent to Chrome OS. The lack of hardware configuration tools is ultimately on Google, as is the fact that the web browser-based OS just simply doesn’t have any decent tools for basic image editing that work as well as even Microsoft Paint.

The Chromebook 15 also has the ability to run Android applications, which worked more or less as you’d expect. The feature is still glitchy — the Twitter app in particular tended to crash on me fairly regularly, leading me to switch back to a Tweetdeck tab docked to the side of my display instead, but things like Google Play Music and Facebook Messenger worked well in my tests. The bigger issue was simply not having too many viable uses for installing them in the first place — many of the apps I’d want on a phone are available as more full featured websites, and the ones that aren’t, like gaming apps, are better enjoyed on the more usable handheld smartphones they were designed for.

Acer estimates around 11 to 12 hours of battery life, and while I wasn’t able to confirm that (since I thankfully haven’t been working 12-hour workdays), I was able to get at least between six and seven hours of battery life out of it without recharging. I’m not sure that it’ll last the full promised 12 hours, but it should at least get you through a day without needing to worry about battery life.

At the end of the day, the Chromebook 15 isn’t a very good computer. But it’s at least an okay Chromebook, and due to its unique size, there will likely always be a place for it somewhere in the pantheon of Chromebooks, even if it’s ultimately still somewhat underpowered. 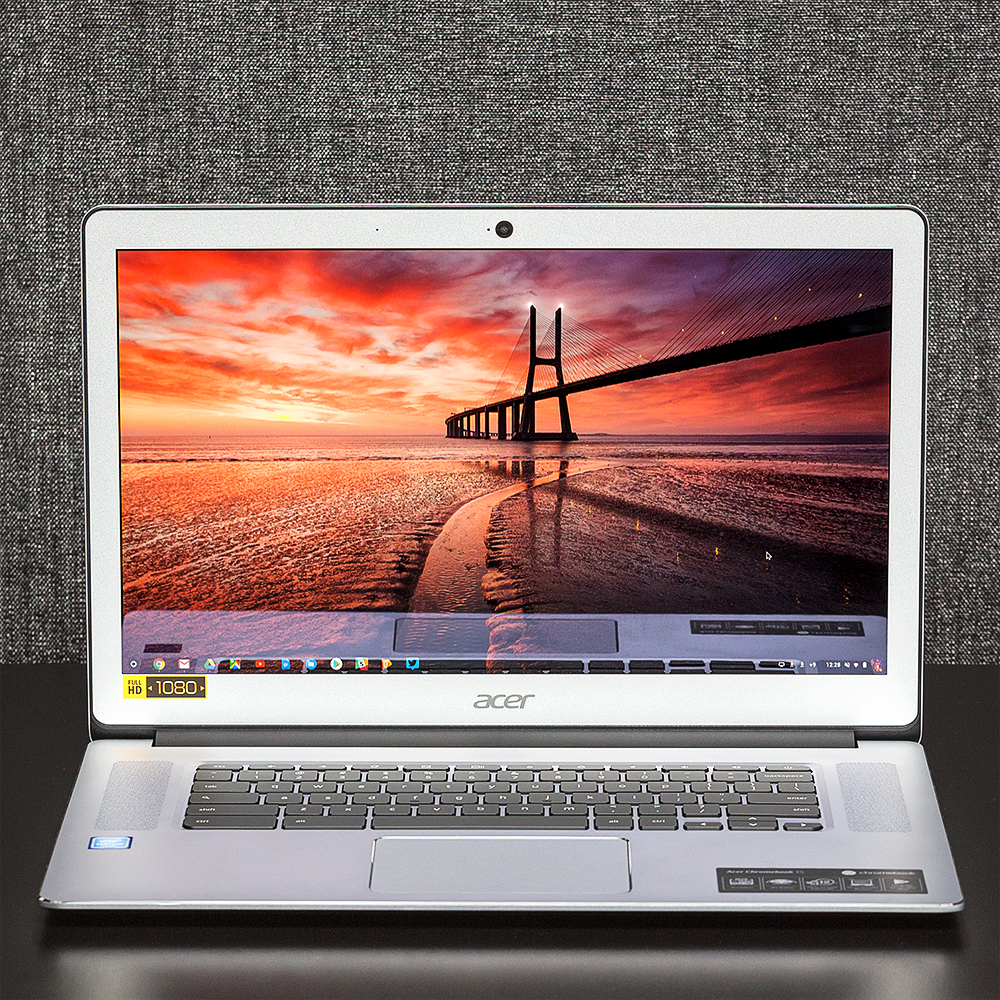