HTC U11 Plus review: when more is less

Be careful what you wish for

Share All sharing options for: HTC U11 Plus review: when more is less

Like the Huawei Mate 10 Pro that we reviewed earlier this week, the HTC U11 Plus is a high-spec, high-price flagship phone that’s going to be next to irrelevant in the US because of its lack of availability. But does that make it uninteresting? Not in the slightest.

The U11 Plus has a backstory that could fill an entire book, coming as the result of Google and HTC’s Pixel collaboration, and being the original first-choice candidate for what would ultimately become the Pixel 2 XL made by LG. As the name suggests, this Plus model is also an evolution of the HTC U11, which I personally loved and still rank as one of my favorite phones of 2017. The U11 showed HTC finally getting back on the right track, and when the Plus was announced in November, it just poured more goodies into the offering: bigger battery, bigger 6-inch screen with vastly reduced bezels, and an improved water resistance rating. Plus, of course, a bigger price of €799 / £699 for the European variant I’m reviewing here with 6GB of RAM and 128GB of storage. That’s roughly $975, if you’re tempted to go to the trouble of importing one.

With all that pedigree behind it and a laudably fat spec sheet, the HTC U11 Plus was all set to tempt and torment me the way the iPhone X and Pixel 2 XL have been doing lately. But, well, things didn’t turn out as rosy as they initially appeared. The U11 Plus has been a reminder that we should be careful what we wish for.

So what’s my biggest disagreement with the HTC U11 Plus? There’s just too much of it. Weighing 188g, it’s 11 percent heavier than the original U11, which was just comfortable enough to be used like a regular phone with one hand. The U11 Plus is on the wrong side of that fine line, joining devices like the iPhone 8 Plus and Nexus 6P in the awkwardly large and lumpy class of phones. The biggest change is superficially subtle but practically paramount: the U11 has a gorgeous, continuous curve across its entire back, which thins the device toward the outer edges and makes it feel much more compact than it really is. The U11 Plus is basically a fat block with rounded edges.

I’ve long been an advocate for bigger phones with bigger batteries, and that’s exactly what HTC has done with the U11 Plus, but the company has sacrificed the U11’s elegance in this Plus transition. The Mate 10 Pro has a slightly larger battery — 4,000mAh versus the U11 Plus’ 3,930mAh — yet it has a slicker, more desirable design. The Google Pixel 2 XL, which has a 3,520mAh cell, feels much thinner and more refined in the hand than the U11 Plus. Importantly, the Pixel 2 XL has also been an endurance champ in my experience, and the U11 Plus doesn’t offer a tangible improvement — meaning HTC loses out on size, weight, and ergonomics against its most direct rivals without beating them on performance.

There’s shockingly little that I can commend about the HTC U11 Plus’ design. The rear cover is made of highly reflective glass, which might look glamorous and appealing if you only ever handle it with velvet gloves, but in conventional use it’s just a canvas for creating abstract fingerprint art. There’s also a sliver of hollow space under that glass, unfilled by batteries or electronics, which makes it feel flimsy and unreliable. Contrast that with the rock-solid rigidity of the glass-covered iPhone X: the iPhone feels like the $1,000 device that it is, whereas the U11 Plus feels like someone didn’t completely think through the integration of exterior shell and interior components.

On the front, the U11 Plus has HTC’s smallest bezels in a long time. It’s an overdue change for the company, and as such, it’s already behind the curve. These reduced bezels aren’t in the class-leading tier of the Samsung Galaxy S8, LG V30, Essential Phone, Xiaomi Mi Mix 2, Huawei Mate 10 Pro, or the iPhone X. They’re just smaller than before. What makes the change feel unimportant is the bulk of the phone behind it. I still feel like I’m dealing with an unwieldy device, even if it no longer has epic BoomSound speaker bezels. Oh, and that super shiny glass back is a slippery nightmare in the hand. The U11 Plus invokes more bad memories of the U Ultra than happy ones of the U11.

The 6-inch, 18:9 display on the U11 Plus is one of the very few such options on the market that aren’t OLED. It’s Super LCD 6 and, on the strength of this phone’s performance, I have to say Super LCD is just outdated technology now. The display appears lurid, aggressively oversaturated when compared against the Pixel 2 XL and iPhone X. It lacks the sharpness, contrast, and accuracy of OLED rivals. HTC touts that it has a DCI-P3 mode (enabled by default) on the U11 Plus for improved color accuracy, but that’s sadly nonsense. My eyeballs feel seared by the overwhelming pinkness of what’s supposed to be red in the Gmail app. This display also lacks the viewing angles of OLED, the importance of which you’ll appreciate any time you use your U11 Plus while it’s lying on a desk and everything looks darker and less accurate.

The best OLED screens of today allow manufacturers to do things that the old LCD panels are incapable of. Google, Motorola, LG, Samsung, and many other Android vendors now sell phones with always-on displays that keep the time, notifications, and upcoming events constantly on the screen. That’s only possible with OLED. If you want a fingerprint sensor integrated into the display, which was one of the highlights of this year’s CES, you’ll only be able to do it with OLED. In this category, HTC is once again outmatched.

The one redeeming quality that could make this phone worth buying is its camera. The U11 Plus camera is a clear step above any and every phone not made by Google. Yes, that includes the iPhone X. There should be no surprises about this fact, because the camera system is lifted directly out of the superb U11, so for the full breakdown of its performance, I shall point you to our HTC U11 review.

In my own comparisons between the HTC U11 Plus and Pixel 2 XL, which involved a lot of zoomed-in pixel peeping, I scored five wins for the HTC phone, six for the Google device, and six ties. It was obvious that Google’s Pixel camera trumps absolutely everyone in low-light photography, but there were a number of occasions where the U11 Plus took the sharper photo and processed the image more intelligently. On the basis of this comparison, I’m almost sure that HTC’s cameras benefit from some of the same algorithmic magic that goes into Google’s Pixel cameras. Google hardware senior vice president Rick Osterloh seemed to suggest as much in an interview with Wired:

“Last year, [HTC] helped us build Pixel, and then a few months later, they shipped the U11, and that phone had the best smartphone camera in the industry.”

The other U11 Plus redeemer is supposed to be its battery. That’s why I’m out here sweating under the burden of this phone’s girth and bulk. But that battery is a very mixed affair. If I don’t turn on the screen, I can grow a beard in the time it takes to tick down a single percentage point. But once I start using the phone, the battery dwindles down surprisingly quickly. The display and camera really sap the life out of the U11 Plus, leaving me feeling flatly underwhelmed. The problem here isn’t that the battery life is bad, it’s that it’s not noticeably superior to slimmer, cheaper, or smaller phones.

As to the actual use of the U11 Plus, I have to reiterate that the display’s color inaccuracy continued to bug me, though it was occasionally overshadowed by the nagging and intrusive bloatware that HTC lades this phone with. Did you know that women are interested in men’s finances? Apparently scientists have confirmed that, according to a random vibrating notification I got from News Republic. This app, along with Facebook apps, and a number of HTC’s own duplicates of Google services, is not removable from the phone. Also, the TouchPal keyboard preloaded on the U11 Plus is utter, unforgivable garbage. Its haptic feedback is junk, its layout is trash, and it leaves me feeling enervated before I’ve even set up the phone. The original U11 shared these flaws, but I was able to overlook them due to its other strengths, including the pretty design.

I’m glad to see HTC shipping the U11 Plus with Android Oreo already loaded up. Even today, many months after Google released its latest operating system, Android vendors continue selling phones with older versions. HTC does the right thing by keeping most of the default Android interface intact, though it also provides its own theme store (which isn’t very good) and it serves up a Sense Companion that, again, tries to duplicate Google Assistant. Google Assistant and Amazon’s Alexa are both also ready to use on this phone, which is a nice bit of inclusiveness on HTC’s part.

All-around performance on the U11 Plus is fast, fluid, and reliable. If you’re persistent enough, you can certainly add your own launcher, Google’s Gboard, and a number of other tweaks to make using this phone feel tolerable. But that’s an Android advantage rather than an HTC one. HTC hasn’t really taken any opportunity to distinguish itself with its own software know-how; the so-called Active Edge squeeze gimmick is back from the U11, and while it can be deployed to do more now, it still remains a gimmick.

Audio has traditionally been an HTC strength, and the U11 Plus keeps that heritage going. Its dual speaker system provides rich and full tones, rendering voices in a natural and realistic fashion. I’m especially conscious of how voices sound on phone speakers these days, because of how much podcast listening I do and the related possibility of having to carry out a call on the loudspeaker. Without a headphone jack on the U11 Plus, HTC bundles the same pair of USB-C earphones that we already liked with the U11. Once again, they’re incompatible with anything other than HTC’s gear.

Everything was set up for me to love the U11 Plus that little bit more than I did the U11. But what HTC has demonstrated with this phone is that sometimes — perhaps more often than not in the mobile industry — giving people more isn’t necessarily going to make them happier. It’s the same issue that Samsung and LG long suffered from, this desire to maximize specs and numbers at any cost. The U11 Plus might find its audience in dedicated spec or camera geeks, but for me it’s too unrefined, too bloated (both physically and in its software) and, as a result, too expensive to recommend.

Our review of HTC U11 Plus 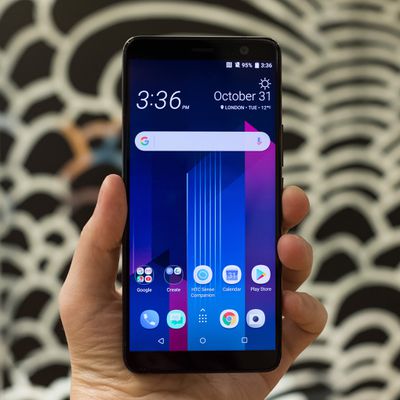