This is the future of ultraportable laptops: a machine capable of 3D editing and Photoshop without bending under pressure or giving up anything in portability. Everything about Asus’ new ZenBook Flip 14 looks and sounds standard for a 2-in-1 laptop — a thin body, a powerful processor, great battery life — except for this: a discrete graphics chip. It’s what makes the ZenBook Flip 14 unique from the many other 2-in-1s available.

Intel and AMD are still working on their collaboration for more powerful GPUs in ultrabooks, but the ZenBook Flip 14 uses Nvidia’s new GeForce MX150 chip. The MX series of chips is Nvidia’s solution for boosting graphical performance in ultrabooks and 2-in-1s. Performance-wise, the MX150 fits into the lower branch of GTX 10 cards, beneath the VR-capable GTX 1050.

So, with all that power, can the ZenBook Flip 14 be a great portable and game laptop? Let’s find out.

This particular ZenBook Flip 14 costs $1,299 and is available online, but a Core i5 / 8GB / 256GB SSD configuration exists at the starting price of $999. Here, I have a 1.8GHz quad-core Core i7-8550U, 16GB RAM, the GeForce MX150 graphics chip, 512GB SSD, and a 1920 x 1080 touchscreen. These are not the specs of an e-sports-quality gaming laptop, but they’re perfect for mobile power users and students looking for a fast ultrabook, with enough grunt for apps like Photoshop.

Finally, you get Windows Hello fingerprint login and a Windows Ink pen for doodling in the box.

Asus is no stranger to producing ultrabooks or gaming laptops. The ZenBook attempts to blur those lines with its discrete GPU. But as a productivity machine? The ZenBook Flip 14’s user experience is enjoyable.

Let’s start with input devices. The keyboard has an excellent backlight but has similar travel to the MacBook Pro’s butterfly keyboard. It’s not my favorite (or my top five), but it works.

The touchpad is smooth, and, to my surprise, includes a sensor with Windows Hello fingerprint protection. But there is something odd: it’s prone to misreading my fingerprint. After mapping more than one fingerprint and attempting to unlock the ZenBook, it frequently failed and asked me to enter my PIN. This is the first time I’ve come across a finicky Windows Hello fingerprint sensor, and I hope Asus can improve its accuracy via an update.

The speakers are Harman Kardon branded, with decent volume. It sounds quite rich and “fills” the laptop and some of the surrounding room, even at 30 percent volume. At the same time, they lack clear sound reproduction due to being mounted underneath the computer. On a bed or your lap, you’ll be muffling the speakers unless you flip the ZenBook’s screen around in tent or tablet mode. But who wants to flip a screen around just to hear it clearly?

As for the display, it’s good. A display with 100 percent AdobeRGB rating makes me very happy. There’s also the 178-degree viewing angle, which is a necessity for the tent and easel modes. It’s all brightness, contrast, and colors.

The 360-degree hinges that hold the laptop together are unassuming. If you look closer, they appear to be the most polished and robust part of the Zenbook Flip 14 — and, sure enough, they’re sturdy and smooth. But there is a hint of flex on the lid when the laptop is closed.

One more note: the webcam. It’s 720p, quite underwhelming, and performs more like a placeholder than something you’d want to use with any regularity.

To keep battery life stable and to avoid running hot with a discrete GPU running at all times, Asus is also employing Nvidia’s Optimus switching technology. When you’re not using a graphics-intensive app, the ZenBook flips back to its Intel display chip.

However, Nvidia’s MX150 has just 2GB of memory, which could go a long way in a GTX 1050 or 1060, but not here. League of Legends, a relatively lightweight game, frequently dropped to 33 fps during team fights, on medium-high settings.

My years of PC gaming have taught me that if a machine can’t cruise through League of Legends, it’s not going to impress me anywhere else. So I tried two other “easy” games to run: Overwatch and Counter-Strike: Global Offensive. The ZenBook Flip 14 couldn’t muster average frame rates above 40 fps for any of the three games.

Yes, the MX150 can push some graphics and handle Photoshop / Lightroom with ease, but it can’t game; you won’t catch me outside with this at a LAN meetup.

The ZenBook Flip 14 has great build quality. It’s compact and light, with fans that keep the system cool and quiet — unless you’re gaming, of course.

On paper, many of the ZenBook’s aesthetics seem like a treat: a 0.54-inch thickness, a feather-like weight of 3.3 pounds, and lots of ventilation underneath the system (toward the back). Only the vents, which get hot under strain, make using it uncomfortable on your lap for a more than a half-hour.

Other nitpicks include that the fingerprint-magnet finish can only be used with the Fn plus an F1-F12 key to change things like brightness and keyboard backlighting when those should be toggled by default.

The Flip 14 manages excellent battery life, even with its more powerful GPU

I also would have appreciated more of a tactile distinction between the volume rocker and the power button. They’re both on the left side of the machine and very easy to mistake one for the other; there are no nubs to feel around for (only the power light). You either turn the system to look for it, or figure out that only one of depresses while the other is a volume rocker.

The ZenBook Flip 14’s battery is one of its prime features. On high-performance mode, I can eke out around eight to nine hours of battery life. But, if I treat the ZenBook as the productivity machine it was intended to be and dial back some of the power management, I can reach 11 hours, easily.

Those are good usage numbers, no matter how you spin it, especially with a discrete graphics chip and a Core i7 processor. When you’re all out of power and need to charge up, you’ll be using a small, squat Asus power brick with a proprietary power jack. There’s no USB-C charging anywhere, which I would have scored as one of the ZenBook’s best traits if it had it.

In the end, the ZenBook Flip 14 is a good 2-in-1 system, with the impressions of a normal laptop, for less than $1,300. Great build quality, fast processors / graphics cards, and dependable battery life are common qualities in an ultrabook, but the ZenBook takes that up a notch by giving you a bit more power.

The ZenBook Flip 14 may not have the level of polish the last Lenovo Yoga had, but unlike the Yoga, it has a discrete graphics chip, the latest Intel chip, and it still has the ability to keep good battery life. It just won’t win any games.

Our review of Asus ZenBook Flip 14 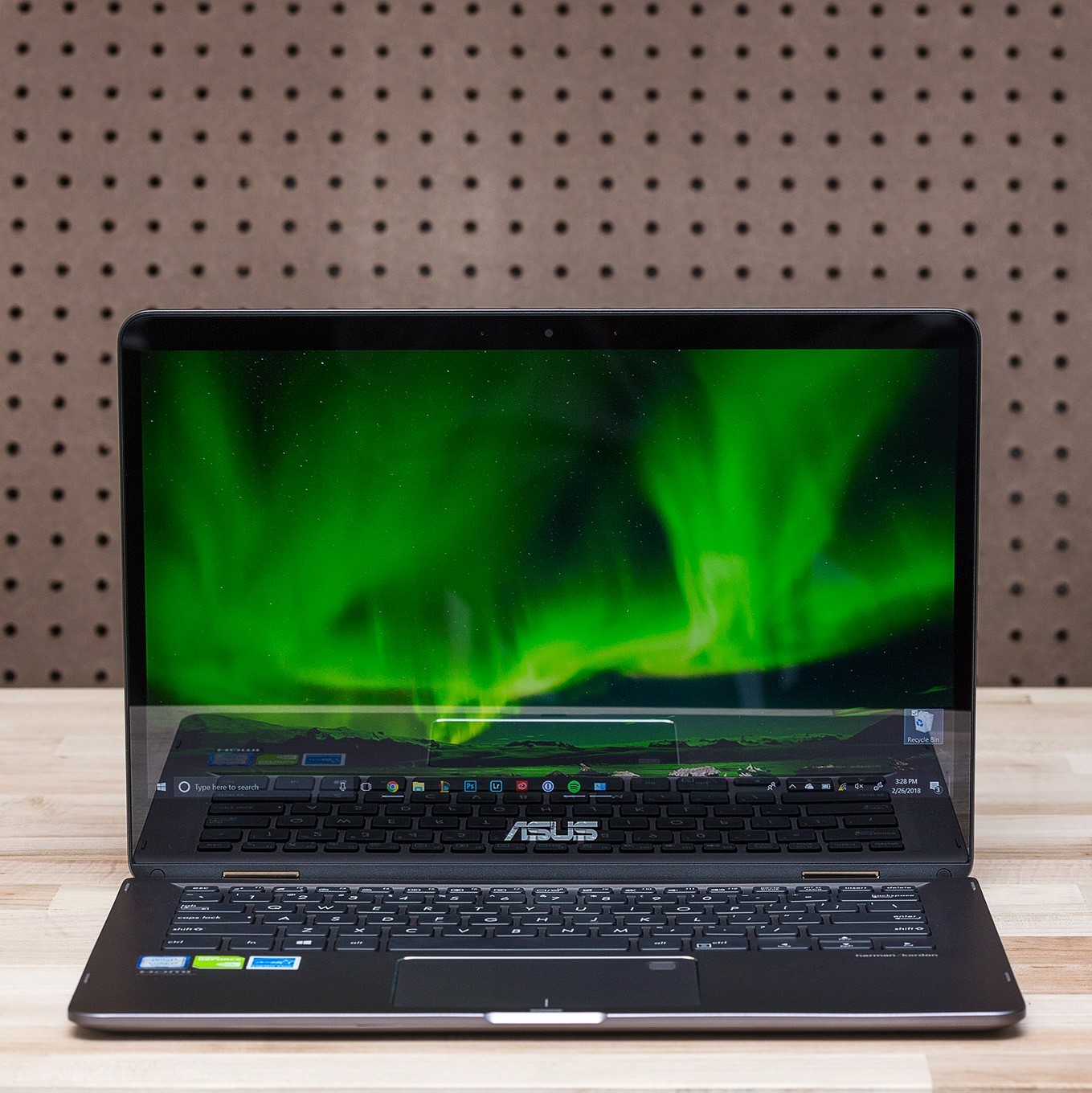