Share All sharing options for: Oculus Go review: mobile VR, minus the phone

For the past few years, consumer virtual reality headsets have mostly come in two flavors: tethered headsets that connect to a computer or console, and mobile ones that are powered by a smartphone. That’s starting to change, and one of the major catalysts is the Oculus Go headset, which launches today in nearly two dozen countries. The Oculus Go is one of a few big “standalone” virtual reality headsets, a category that includes the upcoming Lenovo Mirage Solo and Oculus’ own Santa Cruz prototype. It’s not the flashiest or most high-tech headset on the market. But it’s the best that simple mobile VR has ever been, and it gives fledgling VR apps and games space to stand on their own, without having to compete for space on people’s phones.

Unlike the Oculus Santa Cruz, the Oculus Go doesn’t include full motion controllers or futuristic inside-out tracking technology, which lets users walk around rooms with no external cameras. It allows you to rotate your head, but not lean or walk around. You can move its small controller like a laser pointer, but not fully mimic a virtual hand. It’s got basically the same features as Samsung and Oculus’ Gear VR, but as a dedicated piece of hardware, not a combination of smartphone and plastic shell.

Our review of Oculus Go 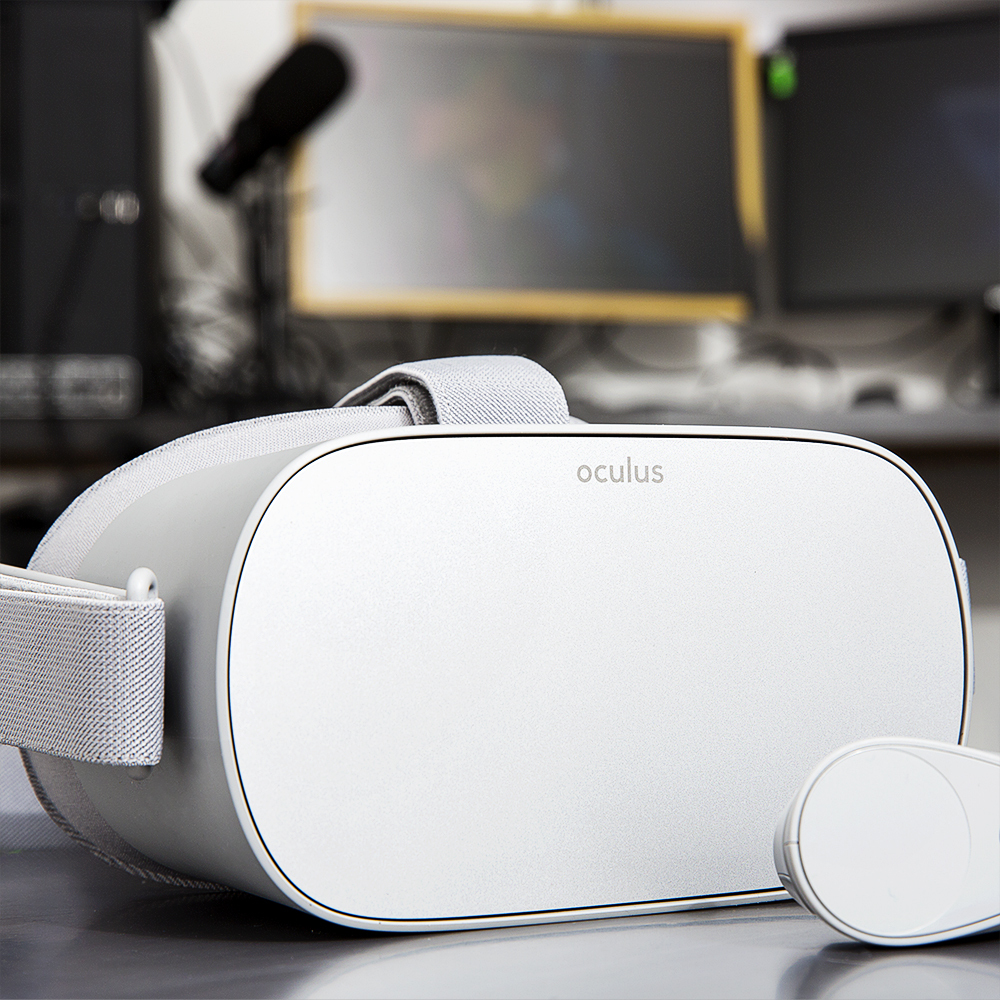 The headset also has smartphone-like technical specs. Its screen is a 5.5-inch display with a 2560 x 1440 resolution (1280 x 1440 per eye). It’s based on Qualcomm’s Snapdragon 821 processor from 2016, and the $199 base model includes 32GB of storage, with a 64GB version selling for $249. These aren’t incredible components, or even up to par with what’s in the latest Android smartphones, but Oculus promises that it’s optimized them especially well for VR apps. It’s also replaced the Gear VR’s magnifying glass-like lenses with higher-quality fresnel lenses, similar to those on the Oculus Rift.

Looking into an Oculus Go isn’t that different from looking into a Gear VR. The Gear VR’s image quality depends on your phone, and my Galaxy S7 Edge displayed harsher and brighter colors than my Oculus Go’s screen. You could probably also measure some difference in field-of-view or latency. But after a certain point, these differences become moot. All VR headsets are noticeably grainy and blinkered, and the Oculus Go is no exception.

Oculus isn’t trying to solve VR’s biggest hardware problems with the Oculus Go. That includes low resolution and limited field of view, but also the basic weight of the headset. The Oculus Go weighs 468 grams, almost exactly the same as the Oculus Rift and the latest HTC Vive. That’s a significant drop from the Gear VR, which weighs over 500 grams with a smartphone. But like almost every VR headset, it eventually weighs on your cheeks, leaving red marks that make you look like a caricature of extreme embarrassment. Speaking of embarrassment, people will think you look silly wearing it. Yes, even though everybody loved the Ready Player One movie.

So if these issues have been keeping you away from VR, the Oculus Go probably won’t change your mind. Its app library is mostly identical to the Gear VR’s, so you won’t be getting access to a bunch of different experiences. Unlike Santa Cruz, which is designed to put high-end desktop VR experiences in a mobile package, the Oculus Go is more like a sibling to the Gear VR. But it’s definitely the overachiever in that family.

The Oculus Go improves on the Gear VR in one big way: you don’t need a high-end Samsung phone to use it, so the headset is convenient for people with iPhones or other Android phones. It also fixes a lot of minor annoyances that make using the Gear VR unpleasant. Its stretchy head strap has a comfortable split-backed design, and its velcro straps slide through plastic guides that make them easy to adjust. (If you have long hair, the split back also works better with buns and ponytails.) The headset doesn’t have a wheel for adjusting focus, but it comes with a spacer insert for people with glasses, and you can buy the headset with prescription lenses.

The headset’s strap guides conceal tiny speakers that direct audio into your ears. They leak sound more noticeably than headphones, but unless you’re in a very quiet place or playing very loud noises, they’re a functional substitute. There’s also a headphone jack on the side, along with a Micro USB — weirdly, not the newer USB-C — charging port.

Oculus’ hardware design feels neither luxurious nor cheap. The headset looks a lot like Google’s second-generation Daydream View, but with no-frills gray plastic instead of soft upholstery, as well as a volume rocker and power button on top. Its controller has the same buttons as the Gear VR’s, with the same top trackpad and front trigger. But it’s far more solid-feeling and satisfying to use, with a nice clickiness that the Gear VR lacks. The whole package is unobtrusive and unpretentious, and I’ve been surprised at how well the plastic resists fingerprints.

The hardware feels neither cheap nor luxurious

You need a companion iOS or Android app to set up the Oculus Go, but it’s mostly optional after those first few minutes. The device connects to wireless networks independently, and you can buy games and adjust settings from either the app or the headset. Bafflingly, neither one lets you check how much storage space you’re using; there’s just a notification once you’ve got 2GB and 500MB left. But Oculus’ standard Home interface is otherwise full-featured, including a web browser and options for left-handed and right-handed browsing.

Oculus advertises up to three hours of battery life on the Oculus Go, and I’ve gotten between two and two and a half hours in my sessions. The headset takes a couple of hours to recharge, and Oculus’ user guide discourages using it while charging. This is pretty dire by most electronics standards, but I’m already used to these limits from other mobile headsets, and most VR experiences I’ve tried, including games, are still best in short sessions.

Most of these games are also still frustrating in some large or small way, which is painful to be saying in 2018, three years after Oculus started selling mobile VR headsets. Oculus touts over a thousand experiences for Gear VR and Oculus Go, far more than rival platform Google Daydream offers. It’s releasing some new titles based on big existing games, like a multiplayer VR version of Settlers of Catan and a port of the mobile stealth game Republique. But as with any app library, only a fraction of the projects are worth checking out — and there’s an inordinate number of generic rail shooters, flying games, and escape rooms. Some of the substantive games I’ve enjoyed playing, like horror-adventure title Dead Secret Circle and stealth puzzler Term1nal, are marred by flawed control schemes or game-breaking bugs.

A number of mobile VR games, including highly promoted Oculus-published titles like They Suspect Nothing, are similar to what The New York Times once called “stupid games” — or more sympathetically, “knitting games.” (Full disclosure: I got that term from my husband.) These are games with small, repetitive feedback loops, like Angry Birds or Tetris, that are often played while you’ve got half an eye on some mundane task like cooking or commuting. In the words of the Times, “we play them incidentally, ambivalently, compulsively, almost accidentally.”

Welcome to the world of hyper-immersive knitting games

This makes sense on a phone or tablet, but you can’t accidentally put on a headset, even when it’s as easy to use as the Oculus Go. And while full-body VR can make simple activity exciting, being completely immersed in repetitive mobile-style games — including relatively complex puzzle games — gets old fast. Maybe I’ll eventually adjust to giving knitting games my full attention; after all, Tetris was originally played on a dedicated arcade cabinet. Or maybe they’re a simple short-term bet for developers but a genuinely a bad fit for VR. If so, I’m not sure how mobile VR will break out of that rut, short of developing a big enough user base to support a larger array of ambitious games.

Gaming isn’t all you can do in the headset, of course. There are plenty of VR social spaces, including Oculus Rooms, a customizable virtual environment where you can invite friends to hang out and play games or watch videos. Many people believe that social experiences are the future of VR, and apps like the incredibly popular VRChat (available on high-end headsets) might prove them right. But mobile VR headsets don’t offer some of the physical immersion that makes these spaces fun, including virtual hands.

Oculus is also promoting VR video and live events. A new mobile VR app called Oculus Venues is designed for watching concerts, Major League Baseball games, standup comedy, and other live shows. The Oculus Gallery app lets you stream photos and videos from your phone or social media accounts. A new service called Oculus TV will launch later this month, serving as a hub for Hulu, Netflix, and other flatscreen television services. You can also catch decent 360-degree videos like the schlocky Campfire Creepers anthology, directed by horror filmmaker Alexandre Aja. None of them are must-watch television, but the medium is steadily improving. That reflects the larger state of VR content today: it’s better than it used to be, but it’s still very much a work in progress.

The Oculus Go makes improvements to the Gear VR, but its biggest achievement is just making mobile VR content easier to access. It’s a reasonably priced device that doesn’t require having a specific phone, doesn’t force you to clumsily lock that phone into another piece of hardware, and doesn’t drain the battery that you might need for more important tasks. And as long as VR is still a labor of love, anything that reduces the “labor” factor is great news.

All of the news from Facebook’s F8 developer conference