By Dan Seifert@dcseifert May 29, 2018, 9:00am EDT
Photography by James Bareham; video by Phil Esposito and Becca Farsace

There are many products that cross my desk for review, and very few of those products surprise me. I’ve been doing this for long enough that I can generally guess how a device is going to perform or work before it even gets to me.

Huawei’s new MateBook X Pro is an exception. Even though the MateBook X Pro has a deep bench of specs and an eye-catching design, Huawei is not exactly an established brand in the laptop world. Prior Huawei laptops weren’t great, either: they had poor battery life, not enough power, bad design, frustrating trackpads, and were generally not worth considering.

Fortunately, the MateBook X Pro has completely and thoroughly exceeded my expectations. While it is not a perfect laptop and it has a couple of faults that will stop some from considering it, it is still the best laptop I’ve used all year. That makes it my new recommendation as the productivity and entertainment laptop to buy right now. 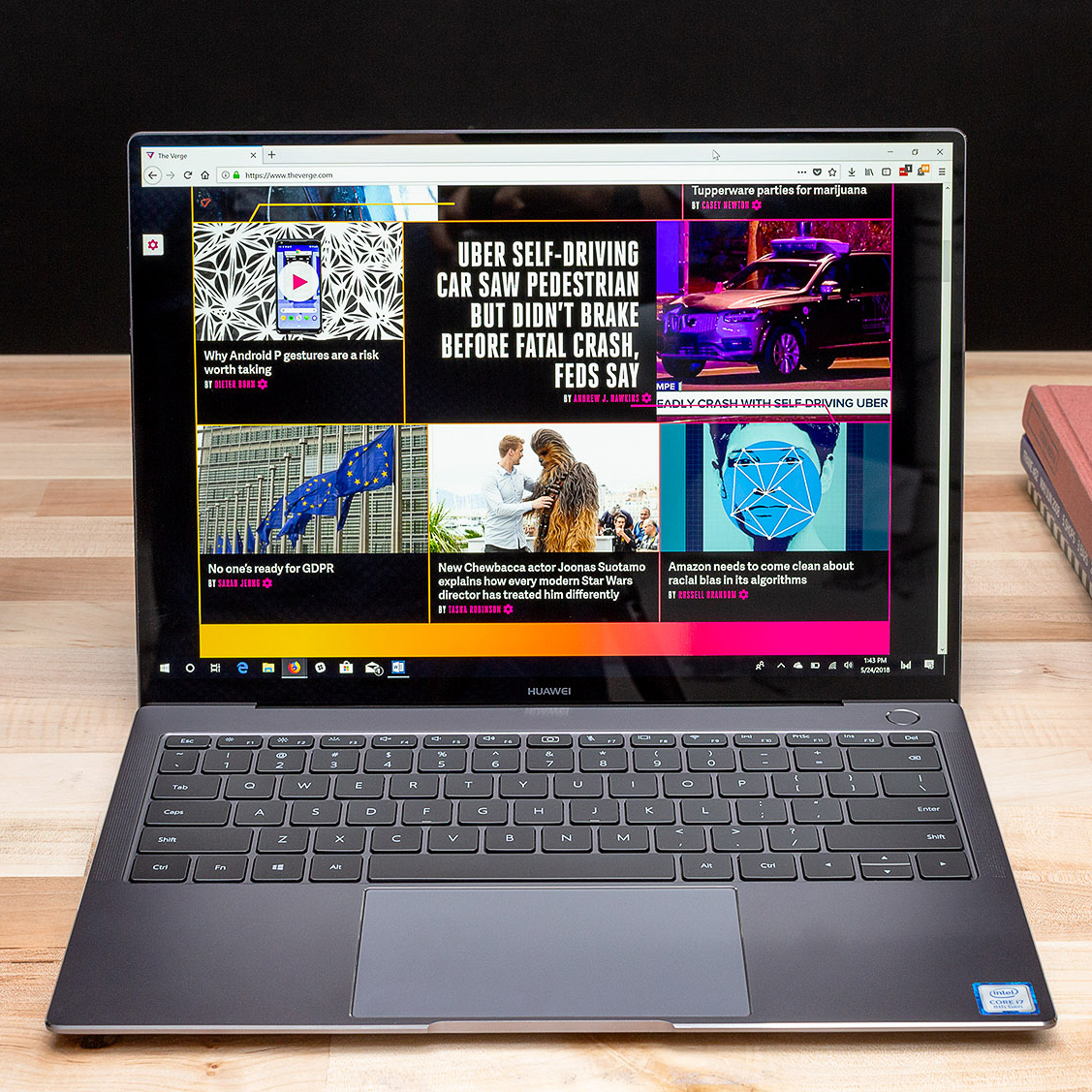 The MateBook X Pro’s design is not original. In fact, I’d call it a wholesale ripoff of Apple’s MacBook Pro. (Even the color is called “space grey,” which might be the most unoriginal thing I’ve seen since smartphone notch mania.) But I don’t really have a problem with the MateBook’s appearance because Huawei did basically everything right when it comes to design.

The smooth metal finish is as premium as it gets, the tolerances are tight, there’s no flex in the chassis or display, and the display hinge works exactly like it should: I can lift it open with just one finger and the whole laptop stays put. That’s something most laptops can’t accomplish.

In addition, the MateBook has two USB-C ports (one of which supports Thunderbolt 3), plus a USB-A port, so I can plug in most accessories without needing a dongle. If I need to plug in a video cable, like HDMI or VGA, Huawei throws an adapter in the box for no extra charge. Another clever trick: the power button has an integrated fingerprint scanner that makes logging in a breeze.

The MateBook is under 15mm thick when closed and weighs just under three pounds, which makes it just as portable as Microsoft’s Surface Laptop, Dell’s XPS 13, and Apple’s MacBook Pro. You can get lighter computers, but I’ve had no issues toting this thing back and forth to the office on my long commute.

Of course, the MateBook is way more interesting when you open it because then you see it has a 13.9-inch touchscreen display with the trimmest bezels you’ll find on any laptop. Huawei claims a screen-to-body ratio of 91 percent, which is even more than you’ll get on smartphones with full-screen displays. The net effect is not only a great and immersive viewing experience, but it means the footprint of the MateBook is the same as most computers with a 12-inch screen, only with a noticeably larger display.

The MateBook’s screen is a stunner, too: it’s a high-resolution, vibrant, and bright touchscreen with a 3:2 aspect ratio that makes productivity tasks such as working with documents or browsing the web much easier than on widescreen displays. It has everything I look for in a non-gaming laptop screen.

Below the screen are two other basics done right: a lovely, backlit, low-profile keyboard with a great layout and a massive, smooth, glass trackpad that supports all of Windows 10’s gestures and Precision drivers. The keyboard has low travel (1.22mm), but it’s not as low profile or annoying to type on as the keyboard on a MacBook Pro. It’s comfortable to use and doesn’t have any weird issues like a too-small Enter Key or difficult to access Function keys. Likewise, the trackpad isn’t as large as the one Apple puts on the MacBook Pro, but it’s still plenty big enough and is perhaps the best trackpad I’ve used on any Windows computer, including Microsoft’s own Surface Book line.

Here’s one of the issues with the MateBook’s design that may be a deal-breaker for some: the webcam placement. Since the bezel above the screen is so slim, there’s no room to stick a standard webcam there, so Huawei came up with a clever solution to hide the camera in a pop-up key in the middle of the keyboard. It’s a wild bit of engineering that also automatically blocks the webcam when you’re not using it, so you don’t have to stick a gross piece of tape over it for privacy.

But actually using the webcam sucks because the viewing angle is so low and the quality of the actual camera is really poor. It has the same problem that Dell’s XPS computers face: the camera’s view is an extremely unflattering up-the-nose shot, and if you need to type while you’re on a video call, your fingers will block it. If you take a lot of video calls from your computer, this will be a problem.

Rounding out the MateBook’s hardware is a four-speaker Dolby Atmos speaker system that’s louder and better sounding than any other laptop I’ve used in this size range.

All of that great design would be for naught if the MateBook X Pro didn’t have the oomph to back it up, but fortunately, its internal specs are just as stacked. Huawei is selling two versions in the US, one with an eighth-gen Core i5 processor, 8GB of RAM, and 256GB of storage, and an upgraded model that bumps up to a quad-core Core i7 chip, 16GB of RAM, and 512GB of storage. The upgraded model also includes a discrete graphics card in the form of Nvidia’s MX150, which means it can even be used for some light gaming and graphical work.

I’ve been testing the fully loaded model, and as its list of specs would imply, it has zero issues handling any of the productivity tasks I need to get done in my day-to-day routine. It’s even capable enough to handle some Photoshop or Lightroom work. It’s not a gaming machine, though it can play some games at lower settings, thanks to its discrete graphics. It’s also not a great video editing workstation. But for browsing the web, writing emails, watching videos, wasting time on social networks, or creating documents and presentations, it’s great. It’s best to liken its capabilities to the 13-inch MacBook Pro, which is obviously what Huawei is gunning for.

The MateBook X Pro has no problem handling any productivity work, plus some photo editing

The MateBook X Pro is not a silent, fanless computer. Its fans will spin at a low thrum a lot of the time and sometimes kick up to a louder whine, depending on how many browser tabs I have open. I’ve mostly noticed this when the computer is plugged into power; on battery, it’s far quieter. Either way, the MateBook never gets loud enough to be truly annoying, which I can’t say for Apple’s MacBook Pro.

Battery life, along with the webcam, might be the other deal-breaker for some, however. It’s not bad. I’ve been averaging between seven and eight hours with my workload, which is more than I get with the comparable XPS 13 or the Touch Bar-equipped MacBook Pro and average in my experience for this class of laptop. But if you need something that’s going to last 10 or 12 hours between charges, the MateBook X Pro isn’t it.

Huawei is selling the MateBook X Pro with Microsoft Windows 10 Home, and it only comes preloaded with the standard software Microsoft includes and a single utility to managing driver updates from Huawei. There’s no extra bloatware (aside from the stuff that Windows bundles, such as Candy Crush, sigh) or annoying trial software from the likes of McAfee that so many PC makers force on their customers.

Given everything that the MateBook X Pro offers and how well it performs, Huawei wouldn’t be out of line to price it over $2,000. After all, that’s what the similarly equipped Dell XPS 13 and MacBook Pro go for, and they don’t even offer discrete graphics options at all.

But the biggest surprise of all might be the MateBook X Pro’s price, which starts at $1,199.99 for the lower-tier model and caps out at $1,499.99 for the fully loaded version. There’s simply no other laptop on the market that offers this much bang for that little buck.

No other laptop offers this much bang for so little buck

The MateBook X Pro’s performance and design alone win it high marks right away, but once the price is factored in, it becomes a no-brainer. Its few faults are only an issue if you happen to make a lot of video calls from your laptop or you need your computer to last longer than a work day away from an outlet. Everything else is as good or better than any other laptop I’ve used.

Simply put, if you are looking to purchase a new laptop for productivity or entertainment, the MateBook X Pro should be at the very top of your list.