The phrase “timeless technology” is an oxymoron. Even the humble wheel is constantly undergoing change and iteration from tire companies. And yet, for one pair of inimitable headphones, time really seems to have stood still for the past 34 years. Koss’ on-ear Porta Pro headphones were launched in 1984, before I was even born, and they’ve remained unchanged ever since. In that time, we’ve witnessed the rise and fall of the cassette tape Walkman, the portable CD player, MiniDisc players, MP3 players with and without hard drives, and smartphones with headphone jacks. But the latest era of personal audio is cutting the cord to the past, which has led Koss to introduce the $79.99 Porta Pro Wireless.

I’ve had a pair of the new wireless Porta Pros for the past couple of weeks, and the quickest way I can summarize them is to say that they’re fundamentally the exact same Porta Pros above the wire. That’s mostly a good thing, though it does make the addition of a Bluetooth connection look and feel like an afterthought that’s been tacked on. 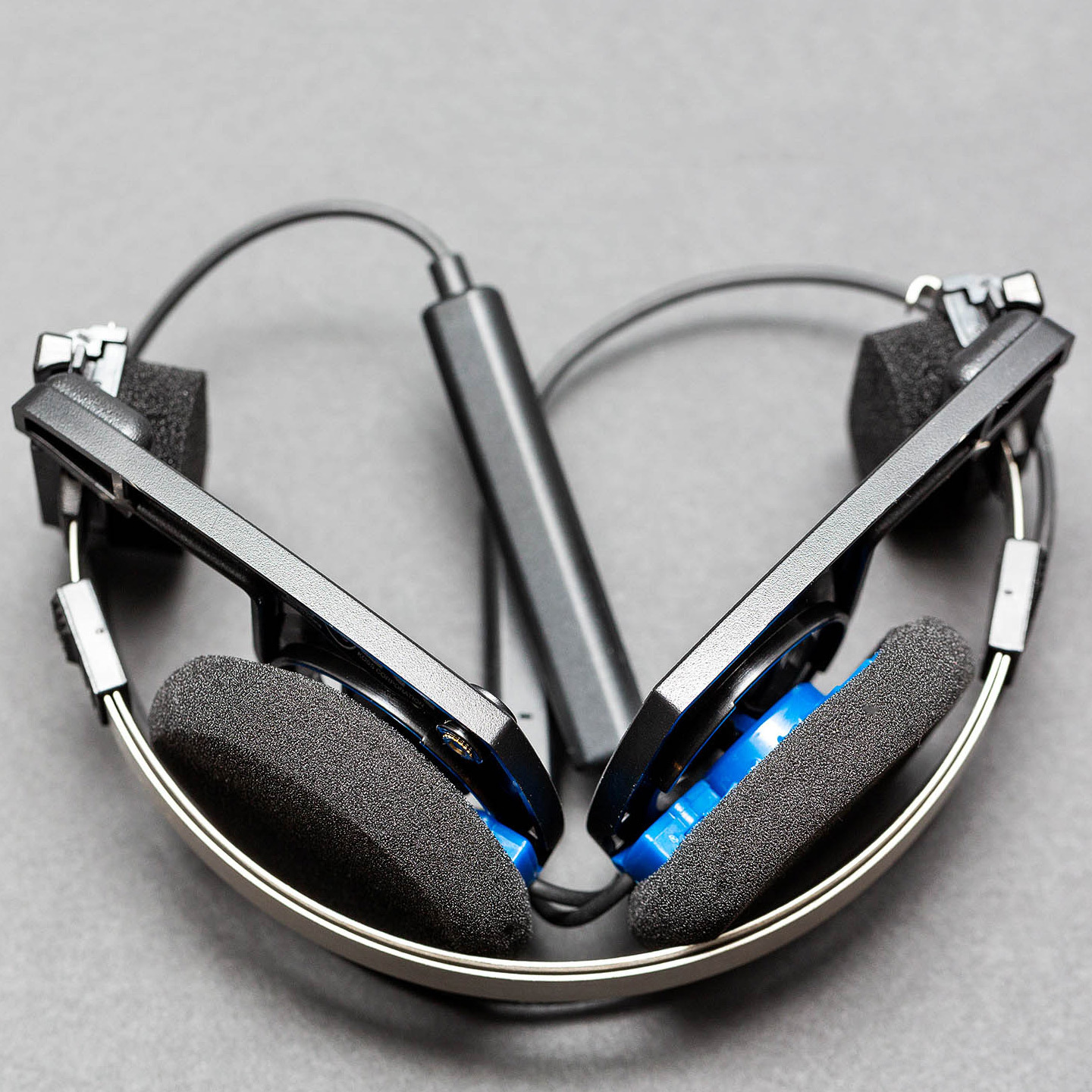 Firstly, it’s worth revisiting why the Koss Porta Pro are such an iconic and enduring pair of headphones. Their design looks frightfully unimpressive even by 1998 standards, never mind our elevated 2018 expectations. There are no high-end extras like leather pads, memory foam, or chamfered aluminum edges. The Porta Pros are made of spartan plastic, bridged by a thin extendable metal band, and topped off with small foam pads. This parsimoniousness with materials leads directly to two of the Porta Pros’ biggest strengths: one is that they’re super cheap (typically retailing around $40), and the other, more important one, is that their minimal weight leads to faultless comfort for even the longest of listening sessions. Granted, the Porta Pro Wireless is a more expensive pair, but its comfort is every bit as good as the original wired variant.

My colleague Paul Miller has also been listening to the new Porta Pros and he is even more enthusiastic about the fit and comfort of the new edition. To him, the added convenience of having these already lightweight headphones detached from any other device is a liberating and highly desirable feature.

Part of me agrees wholeheartedly with Paul, but the other part of me has taken the time to glance at a mirror with the Porta Pro Wireless on my head. Descending from each headphone is a black cylinder that either dangles aimlessly or gets pushed up by my collar, in both cases serving to make me look dorkier than usual. I’m not easily fazed by the idea of wearing ugly headphones for their quality, but the thing that bugs me with the Porta Pro Wireless is that I feel like there was room for them to be better designed. This isn’t a compromise enforced by the limitations of technology, it’s just thoughtless design.

Even if I could forgive the dangly dongles on the wire connecting the two halves of the Porta Pro Wireless, the one thing I absolutely can’t abide is the pulsating blue light that’s emitted from the headphones when they’re on. Embedded in the remote control on the right side of the wearer’s head, this light is way too bright and, tragically, it can’t be switched off. This is more than a mere cosmetic issue: I’m unable to watch movies in a dark room with these Porta Pros without being distracted by their blinking searchlight. Koss says it’s looking into the issue, though it feels like an obvious oversight not to have addressed it before release.

The theme of poor design choices, unfortunately, extends to the functionality of the remote control as well. It has the standard three buttons — one to toggle playback and the other two for volume control — but they’re difficult to distinguish by touch, and I could never do anything with the remote without a necessary period of fiddling.

It’s disappointing to see a design icon like the Porta Pros hampered like this. It’s not too simplistic to say that everything good about the Porta Pros’ design — including the ability to collapse down into a tiny hard case that’s scarcely any larger than those for high-end earphones — comes from the old model, while everything bad comes from the new changes. While Koss hasn’t delivered an abject failure with its 2018 update, the company certainly hasn’t done enough of the hard work of integrating the old with the new in a smooth and coherent manner.

In terms of performance, the Porta Pro Wireless are a close match to their wired sibling, though they once again suffer from their own issues and foibles. The wireless edition supports Bluetooth 4.1 with AptX, which is pretty much the bare minimum you’d hope for from any modern Bluetooth headphones. Annoyingly, I’ve found a background buzzing noise when I have the Porta Pros connected to the iMac on my desktop or my Google Pixelbook. It doesn’t disturb the enjoyment of music when it’s playing, but it’s another slip-up, another little imperfection.

I should underscore at this point that the Koss Porta Pro, wireless or not, are among the best-sounding headphones you can get under $100 (hell, maybe even $200). The sonic bang for your buck with either pair of Porta Pros is hugely impressive. I know there are Bluetooth headphones retailing for stupid prices like $20, but those abominations should be burned before they’re even taken out of their packaging. There’s basically no credible wireless headphone option cheaper than the $99 Beyerdynamic Byron BT. The Koss Porta Pro Wireless are stepping into that void with their $79.99 price.

The signature Porta Pro sound is defined by a convincing presentation of the music that strikes the fine balance between being engaging without fatiguing the listener. Obviously, given their construction, you can’t expect much in the way of real bass, but that doesn’t mean you’ll feel bass-deprived either. The Porta Pros do a remarkable job of conveying a sense of low-end rumble even where they’re not technically churning out much of it. The high end is nicely restrained, eschewing any sibilance or shouty peaks, and the midrange is given room to breathe. These headphones can get very loud too, despite their dainty dimensions.

One significant issue that the Porta Pro Wireless carry over from the wired edition is sound leakage. The soft foam pads aren’t designed for any sort of sound isolation, so whatever you’re listening to with the Porta Pros will be audible to people near you. The converse is also true: external noise will sneak in and disturb your listening pleasure. So commuting on public transport is a no, working in an open-plan office is a no, and even doing your homework in a shared bedroom is a Koss Porta Pro no. I mean, you can try doing all those things with these headphones on your head — Paul’s been known to attend CES with his wired Porta Pros — but the result would be suboptimal.

The built-in microphone on the Porta Pro Wireless is fine. Nothing spectacular, nobody has showered me with praise for my dulcet tones after a call, but it gets the job done. I’m also pleased with the battery of these wireless headphones, which Koss rates to last for more than 12 hours and which I’ve yet to fully exhaust even once. After 3- and 4-hour listening sessions, the Porta Pro Wireless tend to still have more than 80 percent of their charge remaining, and I never feel in danger of running them down too quickly. Due to my habit of compulsively recharging all my gear, I simply end up plugging the Porta Pros in at some point during the week, which has proven sufficient so far. The fact they charge via MicroUSB instead of USB-C, however, is an annoyance in 2018.

The Koss Porta Pro Wireless are the most obviously good and desirable thing in the world of headphones since the invention of detachable wires. Everyone’s got a Bluetooth connection on their phone nowadays, many people have $80 to spare for a pair of good headphones, and Koss already has the formula for terrific sound and comfort. All the company needed to do was combine those things into one.

The Porta Pro Wireless aren’t terrible. Because nothing based so closely on the original Porta Pros can be terrible. But these new Bluetooth headphones are disappointing, a missed opportunity to update one of the true classics of the personal audio world for a new wireless generation.