A $300 neck speaker was always going to be niche, but Bose made a good one

By Chris Welch@chriswelch May 4, 2018, 9:15am EDT
Photography by Amelia Holowaty Krales
34 comments / new

When is the ideal moment to wear a neck speaker? What’s the perfect use case for donning a Bluetooth speaker that’s shaped like a horseshoe? Over the last few months that I’ve spent intermittently testing Bose’s $300 SoundWear Companion speaker, I still haven’t come up with a great answer. When relaxing at home? While cleaning up around the house or yard? Those scenarios are as close as I’ve gotten to something that feels right.

But I’ve definitely learned all the places you don’t wear a neck speaker. You don’t wear it in the office or at the gym. You don’t wear it walking down city streets or on the subway. Don’t be that person. Because it’s literally a loudspeaker wrapped around your neck like a collar, you don’t wear this thing in many environments where you’d typically be — or want to be — listening to music. You can rule it out for your morning commute or taking it on a plane. It might work if you’re running outside someplace quiet where you don’t have to worry about sharing your playlist with everyone you pass.

The SoundWear Companion is a fun, quirky gadget that sounds downright terrific for what it is, but it’s also an impractical product for a lot of people and in many contexts.

Our review of Bose SoundWear Companion 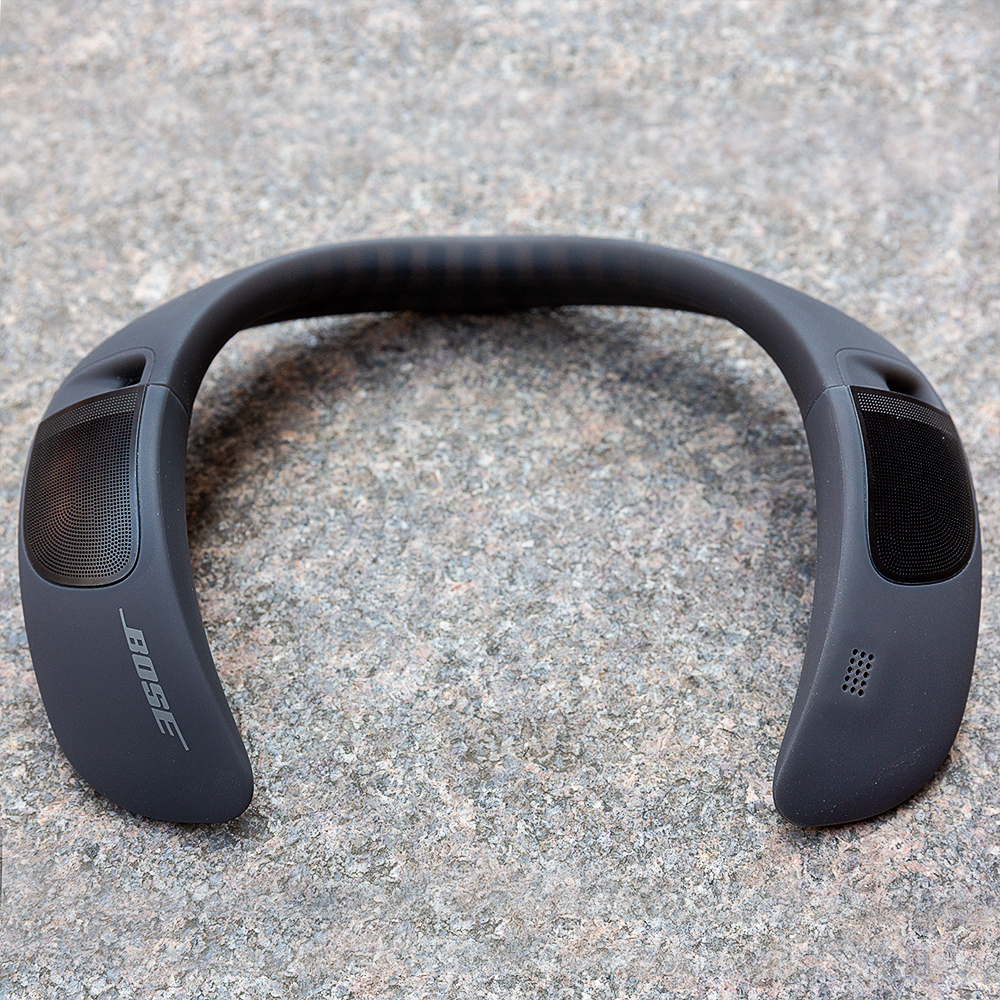 It weighs a little over half a pound. You’ll feel the SoundWear when you first drape it around your neck, but I never considered it heavy or burdensome. If you’re sitting at a home office desk, you might almost forget it’s there over time, but never completely. The two speakers are upward-facing and pointed toward your ears. They’re housed in a dark gray molded silicone collar with steel wire inside that allows the SoundWear Companion to retain its shape if you want a tighter or looser fit. It’s extremely well-built; you can flex and bend this thing around without any apprehension. With it on, you’ll find volume controls and the multifunction button (for Siri / Google Assistant) near your right shoulder, and power / Bluetooth buttons on your left.

The SoundWear comes outfitted in a zippered black stretch cover that Bose says is “acoustically transparent.” I never saw any reason to take it off since it helps the speaker blend better with clothing — to the degree that a neck speaker can possibly blend in — and keeps out moisture. Be warned that if you do remove the cover, it takes a very real struggle to get back on. You’ll have to unzip it slightly to access the Micro USB port for charging. Other colors of the cover are sold separately for $30. No matter what, you’re always going to get some weird looks and mocking comments when wearing it in public.

Tyll Hertsens at Inner Fidelity went incredibly in-depth with the SoundWear Companion, and he has a great explainer on how Bose achieved its unique sound characteristics through clever (and heavily patented) engineering. The two speakers each have a 1-inch driver inside. They aren’t simply blaring sound at your ears; Bose’s waveguide technology actually routes some sound frequencies through passageways around the back of your neck and out of a port near the speaker on the opposite side. This mainly helps produce better bass response than the speakers could achieve on their own. If you don’t like those vibrations on your neck, you can dial down the bass intensity with Bose’s mobile app.

The SoundWear effectively creates a cone of sound around your head. Music you’re playing is definitely audible to people nearby, but the volume is concentrated around the wearer’s dome. It sounds a lot louder to the person listening than everyone else nearby. When it’s on you, it doesn’t sound to your ears like a traditional speaker, nor will you confuse the SoundWear for headphones. It’s a one-of-a-kind thing that’s hard to compare against other means of listening. The battery life is rated at 12 hours, but you’ll get a little less if you’re cranking up the volume for all that time.

The unique sound that Bose has pulled off here doesn’t mean the SoundWear is better than other products, though. It’s spacious with pleasant highs that avoid being shrill, and the bass is punchy even at low volumes. A top-end desk speaker or good headphones will still beat this thing handily, however. They offer a better listening experience if the listening part is what you value most.

But that’s not who the SoundWear Companion is for. The whole point of this oddball gadget is having audio everywhere you go — without putting something in or on your ears — and maintaining perfect awareness of your surroundings.

Here are the best cases I’ve found for it:

That’s really about all I’ve got. Everywhere else, the SoundWear will have you feeling like a public nuisance. I’m not going to knock Bose too hard for that, though. This is clearly a niche product designed to be used at certain moments and definitely not at others. I love weird gadgets. I like that Bose decided to create a neck speaker and then engineered the hell out of it. Not every product is or has to be practical for everyone.

The $300 price is an issue, however. If the SoundWear were a bit cheaper, I think more people would be willing to take a chance on it and see how (or if) it really fits into their lives. For me, someone who wears earbuds everywhere and has a Sonos Play:5 at home, the answer is no. But others swear by this thing, so it might be worth dropping around your neck and entering the cone of sound at your local Best Buy or Bose store.