Lenovo’s Mirage Solo is an innovative VR headset, but most people shouldn’t buy it

Share All sharing options for: Lenovo’s Mirage Solo is an innovative VR headset, but most people shouldn’t buy it

Over the past couple of years, Google has been trying to push virtual reality forward along two fronts. It built a lovably twee VR platform called Daydream into its Android operating system, drawing mobile VR into the spotlight. And it introduced a tracking system called WorldSense, which lets people move around in VR using built-in cameras on their headset. Today, it’s shipping the first combination of the two: a $399 standalone headset called the Lenovo Mirage Solo. The Mirage Solo is a relatively affordable, competently made VR headset, but it’s more theoretically useful than fun to use.

The Lenovo Mirage Solo is a collaboration between Lenovo and Google, and it’s the only WorldSense-powered headset on the market since HTC canceled plans for a Daydream device last year. It uses the same interface as Google’s phone-powered Daydream View mobile headset; supports the existing 350-app Daydream catalog; and uses the same small plastic remote, which — unlike the headset — has a basic internal motion sensor instead of full tracking. Daydream uses the standard Google Play Store, so you can buy and install Mirage Solo apps from your desktop, or sign in to a Wi-Fi network and download them directly, the way you would on any Android device.

Our review of Lenovo Mirage Solo with Daydream 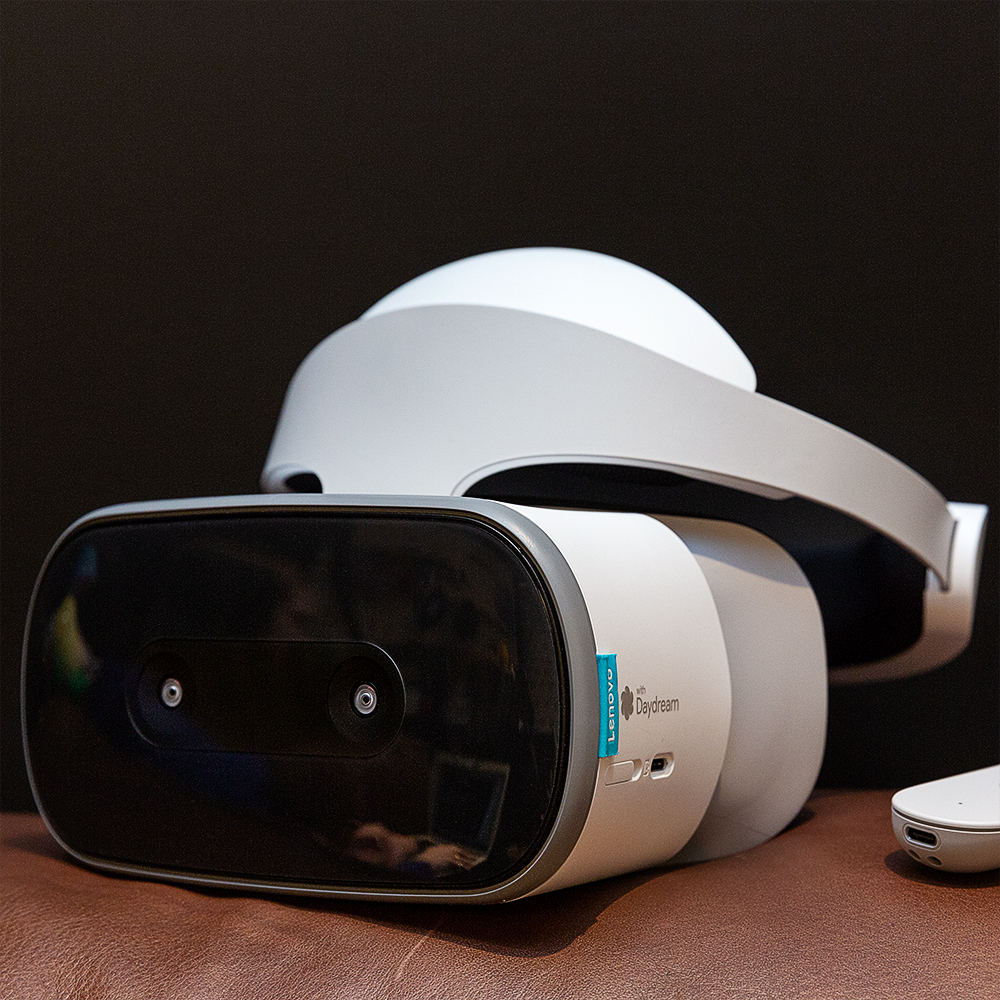 Unlike the Daydream View, the Mirage Solo doesn’t require a smartphone. It has a built-in 5.5-inch screen with a 2560 x 1440 resolution (1280 x 1440 per eye) and a Snapdragon 835 processor, with 64GB of built-in storage that’s expandable via microSD. That means it has the same screen resolution as Oculus’ new Go headset, but a more powerful processor. Lenovo advertises two and a half hours of continuous use; I actually squeezed over three hours of use out of a single charge, playing a mix of games and YouTube videos.

Where the Oculus Go only tracks head rotation, the Mirage Solo has two front-facing cameras that enable WorldSense tracking, peering visibly through the headset’s front panel like big, round eyes. WorldSense is the Mirage Solo’s big draw, and it works well — within very strict bounds. Google and Lenovo don’t say how big a space WorldSense can track, but with the Mirage Solo, you’re artificially limited to one square meter. If you go outside it, everything pauses until you move back in place or reorient the headset.

So it’s hard to judge WorldSense’s full power from the Mirage Solo. I never experienced drift or other tracking problems during normal use, unless I completely darkened the room or covered the cameras. WorldSense might perform differently in a large, bare “warehouse-scale” environment, however, when the camera doesn’t have lots of furniture edges to track. It might also perform differently if you’re not just shifting around one central point — which is all the current system lets you do.

The Mirage Solo’s tracking is a cool incidental perk because virtual worlds feel more natural when you can lean and duck. Apps have to be specifically optimized for WorldSense motion, but over 70 of them already support it, including standout titles like rhythm shooter Rez Infinite and the satirical narrative game Virtual Virtual Reality.

These apps’ WorldSense elements are too limited to be very exciting, though. Some games use motion-based mechanics, like a snowboarding game that has you crouch under branches. But since you’re otherwise just pointing, turning, and flicking the simple Daydream remote, it never feels like you’re really using your body. Compared to experiences with a larger movement space or fully tracked hand controllers, like Vive and Rift sports games or Google’s own Tilt Brush VR painting app, Daydream motion mechanics feel superfluous or even annoying, especially since it’s easy to accidentally move too far and pause everything.

Virtual reality video, including YouTube’s VR app, is a big draw for Daydream. But few VR videos support positional tracking, so there’s no benefit from WorldSense there. You also don’t need the Mirage Solo to use the new Lenovo Mirage Camera, an interesting little two-lens point-and-shoot device that syncs 180-degree pictures and video with your phone.

Google’s Daydream ecosystem is much smaller than Oculus’ app catalog, which is already pretty small. Both platforms have myriad repetitive mini-games, and Daydream doesn’t have many well-executed and ambitious projects to balance them out. A new Daydream adventure game based on the Blade Runner franchise, for instance, has a fun premise but slapdash writing and gameplay.

If the Mirage Solo were cheaper and more ergonomic, it could serve the same niche as the Oculus Go: people who want mobile VR that’s not based around a phone. But unlike Oculus’ $199 standalone Go and $129 phone-based Gear VR, there’s a huge price gap between the $399 Mirage Solo and the $99 Daydream View. And the Daydream View still looks and feels better than the Mirage Solo. Even with the inconvenience of locking up your phone, it’s the more user-friendly headset. The Mirage Solo doesn’t even have built-in speakers or headphones, which are becoming pretty much standard for new VR headsets.

Meanwhile, WorldSense tracking comes with literally heavy trade-offs. The Mirage Solo weighs 645 grams, the same as Samsung’s bulky Odyssey headset, which features inside-out tracking but is tethered to a computer. (For comparison, it’s over 170 grams more than the Oculus Go.) The weight is tolerable when it’s well-fitted, but the fitting isn’t immediately intuitive: you have to cinch the Mirage Solo onto your head with a plastic ring, while also using a small button to adjust its angle based on your head size.

The Mirage Solo feels built more for developers or professionals than casual users, a theory that’s backed up by statements from Clay Bavor, Google’s head of immersive computing. “What we’ve seen is real interest from early adopters and VR developers, creators, who get the power of an untethered standalone positionally tracked headset,” Bavor tells The Verge. “We’re seeing that, zooming in on that.” Google will wait to see how the Mirage Solo performs, then decide whether to work with more partners for similar standalone headsets.

Google and Lenovo are playing a really, really long game

The headset’s shortcomings aren’t such a big deal outside consumer entertainment. Many designers and engineers use existing VR headsets or “CAVE” environments to examine 3D models, but don’t need full virtual bodies, so the Mirage Solo offers a highly self-contained alternative. Developers will apparently be able to turn the boundary system off, letting them test WorldSense’s true limits. If you’re interested in building for fully tracked standalone VR, the Mirage Solo is an easy way to test the waters before more consumer-friendly headsets launch.

And WorldSense is part of Google’s much larger “immersive computing” initiative, which encompasses augmented and virtual reality. “The way we see the Mirage Solo and our larger standalone efforts is one of the steps of this arc, up this ramp of better and better versions of the technology,” says Bavor. Ultimately, WorldSense isn’t just a replacement for traditional tracking the way it is in the Mirage Solo. It’s a system that could combine with other computer vision and location-tracking technology to help really blend physical and virtual environments.

So with the Mirage Solo, Google and Lenovo really seem to be playing the long game. They’ve put Google’s Daydream platform, which was designed to get everybody into VR, into a device that mostly makes sense for early adopters and industrial users. They’re releasing one of the first self-contained headsets with potentially groundbreaking motion-tracking technology, but severely hobbling its capabilities. This is an experiment that might pay off in the years to come, if developers build more ambitious WorldSense apps and Google comes up with a better controller. But as far as buying the headset goes, most people should probably just wait for the payoff.