Nokia’s Sleep tracker is easy to use, but not much better than an app

A handful of features would make this a lot better

Share All sharing options for: Nokia’s Sleep tracker is easy to use, but not much better than an app

Sleep gadgets are more popular than ever. There are a plethora of options available that all promise to aid in a better night’s rest, from space-age sleep masks to apps that utilize your phone’s microphone and accelerometer to track sleeping habits. Nokia Health’s entry into the sleep gadget arena is a pad placed under your mattress, aptly named Nokia Sleep. It promises to be more accurate than simply using an app, thanks to a sensitive pressure sensor that utilizes ballistocardiography — a method that measures presence and movement, respiration rate, and heart rate. Naturally, everything it captures is logged into an accompanying app.

The Nokia Sleep is a Wi-Fi-enabled rectangular pad that communicates with Nokia’s Health Mate app on your phone. Setup is quick and simple. Simply slide the pad under your mattress at chest-level, plug it in, and install the Nokia Sleep module through the Health Mate app. The app walks you through a few standard steps, like creating an account, pairing with the Nokia Sleep, and connecting it to your Wi-Fi. Then, it calibrates and is ready to go.

Our review of Nokia Sleep 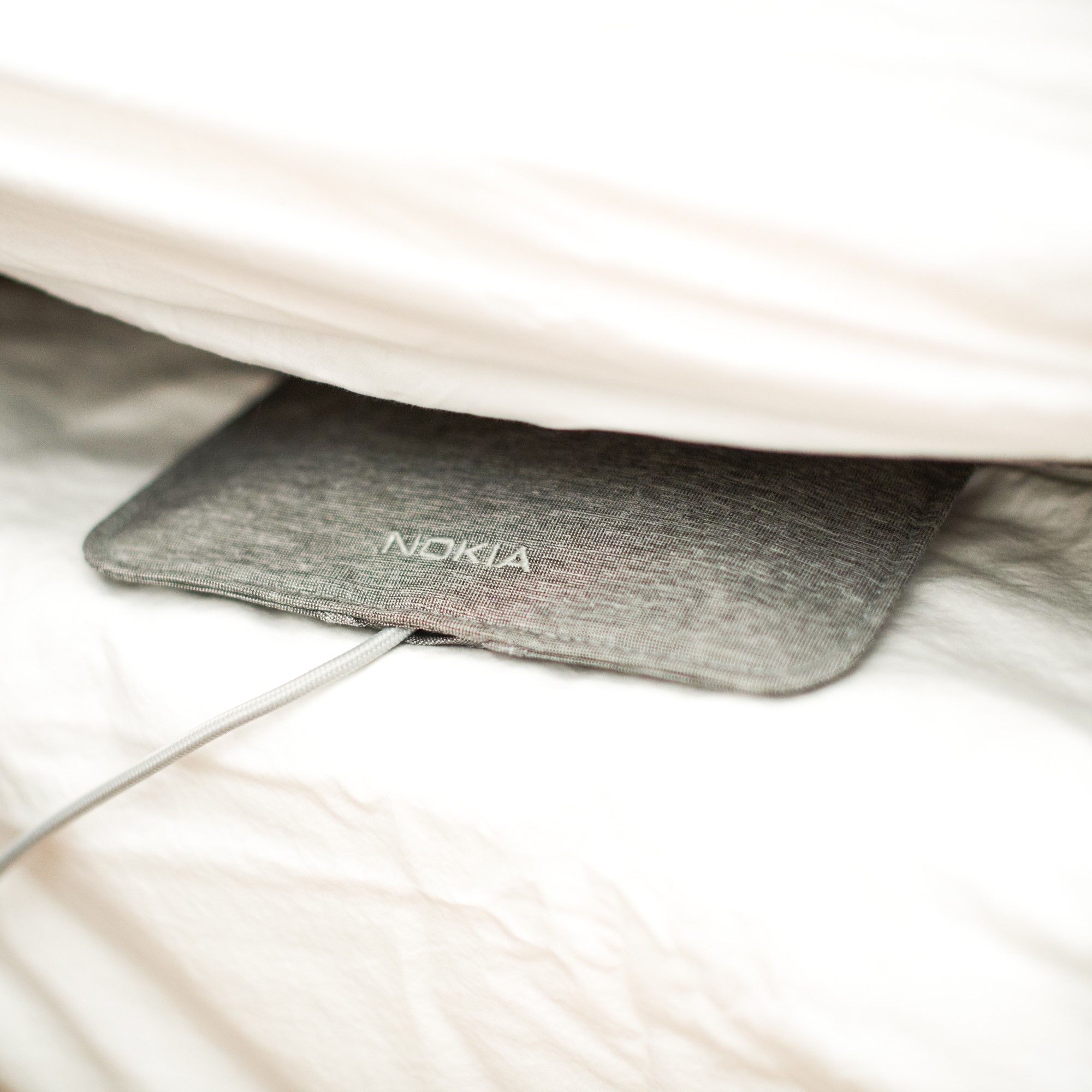 While you sleep, the sensor gathers all sorts of data, giving you an easily digestible overview the next morning within the app. It doesn’t just show how long you were asleep, but it breaks down when you were in periods of light, deep, and REM sleep. It measures how long you were in bed before falling asleep and also, how long you stayed in bed after waking up. That, combined with a host of other details, like your heart rate, time spent in restorative sleep, and duration of sleep, are all combined together to give you an overall score for the night, ranked on a scale of 0-100.

What it measures is on par with what some apps for your phone currently claim to provide. Pillow for iOS, for example, uses sensors already in your phone or Apple Watch to track sleep stages and duration, heart rate, and overall quality. Runtastic Sleep Better for Android also tracks light and deep sleep phases, and says it can measure time spent awake in bed. Personally, I am an avid Sleep Cycle user, another app that uses a phone’s sensors to track quality of sleep and sleep stages. In particular, I like Sleep Cycle because it offers a variable alarm: instead of setting a particular time, you designate a 30-minute window. When the app senses you’re in a light sleep phase during that stretch, it wakes you up. In theory this means you’re less disoriented when the alarm goes off, and I’ve found that to be the case when I use it. It’s worth noting that while many swear by these sleep tracking apps, the veracity of their beneficial claims and precision has been debated.

I concurrently used Sleep Cycle alongside the Nokia Sleep to compare sensor results, and found that the graphs produced often had similarities. Using both is also how I found inaccuracies in Nokia Sleep’s sensors. One weekend, I set an alarm in Sleep Cycle with the intention of going back to sleep. I woke up, turned Sleep Cycle off at 7AM and dozed off again. Nokia Sleep’s sensor didn’t detect it, showing no interruption in sleep at that time.

In fact, Nokia’s sensor often failed in this one particular area: sensing if I woke up and went back to sleep. Most times, if I woke up in the middle of the night to get a drink of water, the Nokia Sleep didn’t register it, showing I had an uninterrupted night. Meanwhile, the Sleep Cycle app would catch these things (perhaps because using the phone’s microphone, it’s easy to register the clink of a glass).

The Nokia Sleep can also take advantage of some IFTTT applets, but this range is limited. There are 10 in total, which can do things like set a Hue scene when you get out of bed in the morning, or track your sleeping habits in a Google spreadsheet. Unfortunately, there were several I wanted to try, but couldn’t. Muting my phone when I get into bed sounds useful, but that doesn’t work with my iPhone, only Android. I would totally use the Nokia Sleep to automate my room temperature, but I have an Ecobee, not Nest.

These restrictions are frustrating, and mean you can’t get the most out of your Nokia Sleep unless you have a specific set of products already integrated in your life. I was able to set my Hue lights to automatically go off when I got into bed, but since I normally like to read for a bit before sleeping, I eventually disabled this. The Nokia Sleep also works with the Amazon Echo, and you can add the Nokia Health Mate skill to ask it how you slept last night. I have an Echo, and tried it a couple times, but abandoned this as well — I just preferred to view the data on the app.

Lack of an alarm function is a confusing omission

A glaring omission from the Nokia Sleep is an alarm clock function. This is a sleep-centric device. At the very least, there should be the option for a basic alarm. The absence of one pretty much voids the concept of the Nokia Sleep being a “set it and forget it” device, especially when 85 percent of people use an alarm clock to wake for work, and some surveys say 48 percent of those aged 16–34 use their phone as that alarm clock. Beyond the practicality of an alarm, how we wake up is an important part of both sleep quality and framing your mood for the day, and should be a consideration in Nokia Sleep. I would have loved a variable alarm function, like I use in Sleep Cycle. Going even further, since Nokia Sleep pairs with Hue lights, why not an IFTTT applet to use Hue as a sunrise light alarm? Hello!

Nokia absolutely has the means to integrate an alarm. Its health division is the result of a Withings acquisition, which used to have a product called Aura. A combination of a sleep sensor and bedside unit, Aura tracked sleep and acted as a “smart alarm clock” using methods mentioned before like variable wake up time and a light source. Nokia Health also currently has a variable, vibrating alarm clock function on its Steel HR activity tracking watch, so perhaps this is simply a case of a company leaving an option out so you have to buy in further. Also, you know what integrating an alarm would solve? Some of those sensor dropouts mentioned earlier, and the ability to monitor and dissuade morning snoozing, which can screw up your entire day.

If you’re trying to adjust your sleeping habits, the Health Mate app has some cool reminders you can put in place to phase out nasty patterns. There’s one that will prompt you to have a cup of tea 20 minutes before your usual bedtime. Another will cue you to drink a glass of water in the afternoon instead of something caffeinated. You can pick what days to have the reminders go off, and select the time. On the downside, there’s no way to take notes within the app, something foundationally useful for tracking what impacts your sleep.

A portion of the app I wasn’t able to fully explore is an opt-in program called Sleep Smarter. Nokia says it worked with sleep experts to develop the eight-week program, which takes note of your habits and gives suggestions that should lead to a better night’s rest. One marker it uses is “social jet lag,” which is how much your sleep schedule differs between weeknights and weekends. A sample screen shot from the program shows some of the basic feedback it gives, recommending a user commit to regular exercise in order to fall asleep faster.

Ultimately, Nokia says the Sleep Smarter program can increase your average sleep by 12 minutes a night. That doesn’t seem like much, but Nathaniel Watson, professor of neurology at the University of Washington and advisory board member to SleepScore Labs, a company that measures the science around sleep, tells The Verge that every minute counts. “Sleeping even 10–15 minutes less than you need on a regular basis can contribute to sleep debt that can result in health and performance impairments,” says Watson. “Sleep deprivation is the most common cause of sleepiness in our society, so every bit of increased sleep up to the point that the individual is sleep satiated is important.” If you were to get an extra 12 minutes every night, it would add up to an extra six hours of sleep a month. So, it doesn’t sound like much, but over time, it helps.

At the end of the day, is the Nokia Sleep worth the $99 price tag? That’s hard to say. Nokia did recently sell its Digital Health business back to the co-founder of Withings, leaving the future of those products with a bit of a question mark. A representative from Nokia’s Digital Health division says that Nokia will continue to fulfill its obligations to customers with Digital Health products and that the Nokia Sleep, along with all other products in the line, will still be supported and receive financial backing through Withings. But they wouldn’t commit to how long that support will actually last.

In addition, consider that many of the things Nokia Sleep tracks can already be tracked by free apps. Though an app won’t track with the same degree of accuracy, I found Nokia Sleep’s sensor wasn’t perfect either. And, while the Health Mate app has some bonuses that I haven’t seen on comparable free apps, like the reminders, its shortcomings are conspicuous. Sure, it shows you the data it collects, but doesn’t let you add personal notes, or offer many meaningful insights itself, unless, presumably, you’re a few weeks into the Sleep Smarter program (and even then it’s slim).

All of this I could ultimately justify for the right person, especially with the smart home connectivity. The app is a streamlined experience, and I found the reminders helpful. But, my tipping point is the lack of an alarm clock on a device created exclusively for tracking and improving sleep. Even with all the automatic functionality built into the Nokia Sleep, you’ll still have to use whatever your alarm of choice is, which is even more frustrating knowing this is something that Nokia could have... done in its sleep.