HP’s latest premium 2-in-1 has lots of power, but is far from perfect

There’s a creative user base out there who want the complete package in a laptop: portability, power, a stylus, and a touchscreen. HP’s Spectre x360 15-inch is the latest laptop attempting to fulfill those needs.

This is by no means a budget laptop; the Spectre line has been featuring HP’s high-end offerings for a few years now and the price for this year’s model starts at $1,369. The well-equipped unit I’ve reviewed is $1,719, which isn’t cheap, but still less expensive than its famous competitor, a 15-inch MacBook Pro which starts at $2,399. 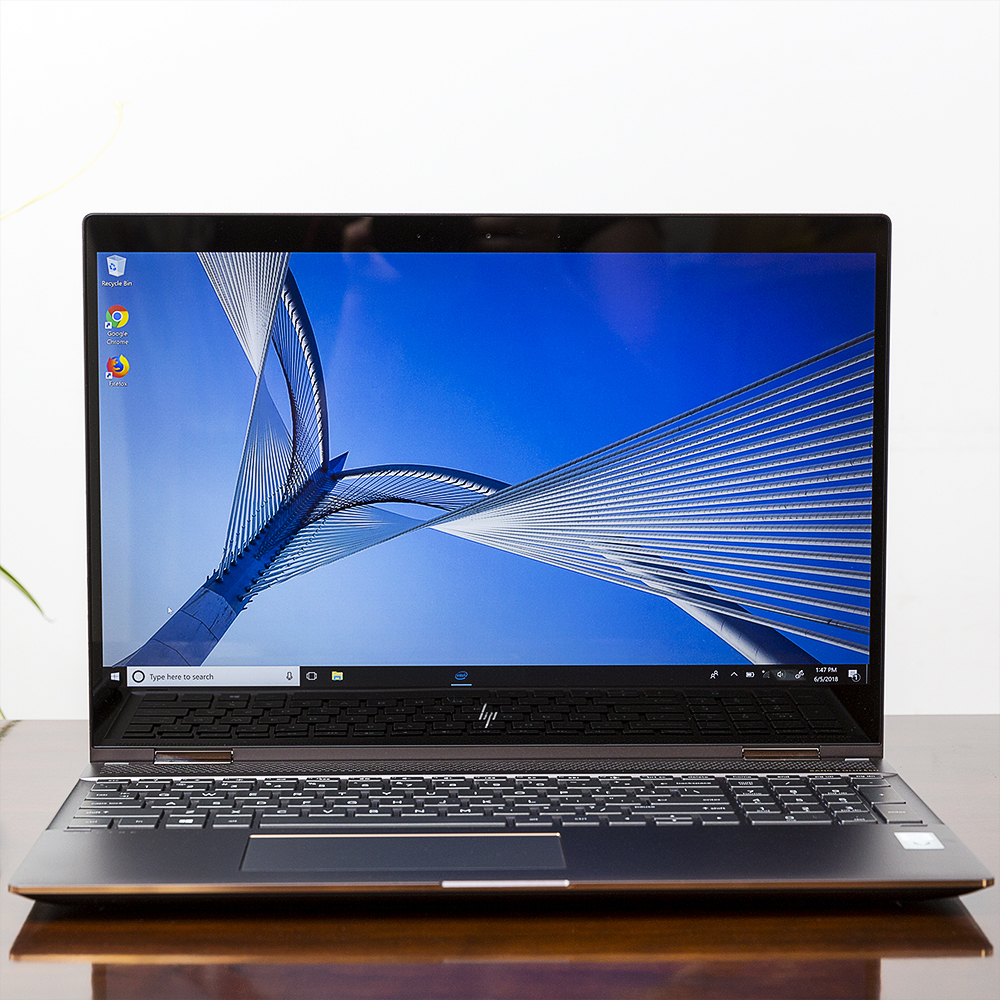 If I were only evaluating the Spectre x360 15’s technical prowess, it would be an easy recommendation, but it’s a slightly different story when using it as my daily driver.

The Spectre uses a completely metal unibody design, so it’s sturdy and quite attractive in nature, with copper edging and HP’s new “diamond-cut” edge for the rear-end of the laptop. It’s a nice aesthetic touch, but not game changing in any way. If you’re wondering about the keyboard and palmrest flexing under exerted pressure, unfortunately, the Spectre x360 suffers from both.

There are quality control issues with the Spectre x360 15

There appear to be some quality control issues with the Spectre x360 15, as well. During my test with HP’s provided review unit, I heard a rattle coming from the left fan vent when used in clamshell mode; the issue persisted in tent and tablet modes. To confirm this, The Verge purchased a retail model to compare, and it did not produce the same sound in any of the usage modes. It’s likely our review unit was defective, so Spectre x360 15 buyers should check their machine thoroughly upon setting it up.

Furthermore, the bottom plate and rubber feet don’t keep the laptop perfectly level on a desk; if pressure is applied to the corners of the palm rest, the whole chassis will wobble slightly. This was noticeable on both units we evaluated.

Also, despite the 4.71-pound stat on paper, holding the Spectre 15 with two hands feels cumbersome due to the large footprint. It can be used as a tablet thanks to the 360-degree hinge, but it’s far too heavy and unwieldy to use this way for any length of time.

Adorning the sides are a volume rocker, power button, and fingerprint sensor

Ports-wise, photographers will be happy to know the Spectre x360 comes with a full-size SD card slot. The rest of the available ports include a 3.5mm audio jack, two Thunderbolt 3 ports, HDMI-out, a singular USB 3.1 port, and power jack. There are three noteworthy additions to the port sides of this year’s Spectre x360 15: the power button, Windows Hello fingerprint sensor, and volume rocker on the left and right sides, respectively.

HP is betting that creatives — photographers, multimedia editors, artists, etc. — will like the Spectre x360 not only for its looks, but the fact it comes with a pressure-sensitive Windows Ink pen, powered by a AAA battery. However, it’s worth noting that nothing has changed regarding the pen for the past few generations of the Spectre x360.

If you doodle something in Windows Ink, you’ll find that there aren’t any special functions mapped to the two buttons by default on the pen, other than erase. Overall it works similarly to a Surface Pen, but the included pen is not as precise as say, a Wacom pen and tablet combo, so anyone into serious drawing might opt for an external solution.

The included pen is decent, but if you’re serious, you’ll want the $89 Tilt Pen

If you want something more capable, HP offers an optional Tilt Pen for $89, which has the same 1,024 levels of pressure, but adds a tail-end eraser, USB-C charging, and the ability to draw at an angle. But it’s still not as capable as a Wacom pen and tablet or even Microsoft’s latest Surface Pen.

Speaking of which, let’s talk about the screen. Yes, it’s true 4K (3,840 x 2,160 pixels) locked at 60Hz with 340 nits brightness, 282 pixel-per-inch and tons of vibrance. It’s a nice display to look at, however some Windows apps still struggle or look slightly out of place when scaled to the full 4K resolution.

Though compared to the big picture — it being for creatives — that’s all negligible, because the disappointment actually lies with the lack of 100 percent Adobe RGB color coverage. Yes, a display meant for creative power users who might be picky and most likely will edit colors, won’t have support for the full color spectrum of the Adobe suite.

When buyers select the Core i7-8705G processor option, you’ll automatically acquire an AMD RX Vega M graphics chip, which is more powerful than the default Nvidia GeForce MX150 included with the lower-end processors. This doesn’t mean the Spectre x360 is suddenly a venerable gaming machine, however it never skips a beat, rendering the entire Windows 10 environment in 4K. It can even play League of Legends on medium settings at 60 frames and 4K resolution.

The Spectre 15 starts to lose its luster for me once I got to extensively using the keyboard and touchpad. The keys are shallow with some resistance (though not as shallow as the MacBook’s), too small even for my nimble fingers, and generally just not a great experience to type on for long periods. The same can be said about the touchpad, which is offset to the left to accommodate the main QWERTY layout. It’s oddly sized, being too wide on the sides and too short from the top and bottom.

To make matters worse, HP is still using Synaptics drivers on their consumer machines, instead reserving the buttery Windows Precision drivers for their enterprise-focused Elitebooks; because of this you lose the smoother multitouch gestures and interactions.

Regarding login security, this year’s Spectre x360 impressed me because you have two methods of using Windows Hello: facial recognition and fingerprinting. It’s the norm to see one or the other on a high-end Windows laptop, but not both. They both work well, although I find the facial recognition to be more convenient and faster.

The odd placement of the fingerprint sensor on the side of the machine means you have to poke around to find it every time, whereas a facial login requires you just open the lid, or look at the sensor if it’s already open.

For the speakers, HP is continuing its longstanding audio hardware and tuning partnership with Bang & Olufsen. It also comes with a tuning app with adjust bass, treble, and “dialog clarity” sliders. Unfortunately, asking for max bass doesn’t really do anything for the Spectre x360 (in fact, it comes with it turned up already).

The speakers can fill a small room, but don’t sound that great

Audio reproduction is composed of treble and a hollowness that’s worse when compared to the MacBook Pro 15’s speakers. At max volume, the Spectre x360 can fill a small room, but won’t be satisfactory to any audiophile.

The toll a quad-core processor, discrete graphics, and 4K screen take on a 84-watt battery is… obvious. Running some Windows updates in the background on the maximum performance power plan and 70 percent brightness fully drained the battery in three hours.

If you’re more conservative about power usage, setting the brightness to 50 percent, and instead opt for “better performance” — a sort of middle ground — you can reach close to six hours on a charge. Blame the power-hungry specs, but you’ll need to bring your charger (which uses a proprietary barrel connector, not one of the x360’s USB-C ports) if you expect to use the Spectre x360 for a plane flight or at a campus library.

HP has to better address touchpads and keyboards for consumer laptops

All in all, the Spectre x360 is a powerful laptop on the interior and aesthetically pleasing on the exterior. However, it lacks harmony when it comes to nailing the right balance for creative users and mobile warriors who want quad-core performance and 4K visuals in a portable package.

HP has some work to do with its approach to touchpads and keyboards on its consumer laptops. This is especially true if an upgraded machine like this unit is supposed to appeal to a user base that otherwise would flock to a Surface Book or a Macbook Pro.