It was almost a year ago that I first heard the Final D8000 headphones. In the midst of 2017’s CanJam London, an exhibition overflowing with ultra expensive and fancy headphones, earphones, amplifiers, and music players, the D8000, still in prototype form, were my absolute highlight. Their sound was instantly immersive, engaging, and dynamic in a way that I found intoxicating. It didn’t matter to me that they were being held together by a Frankensteinian skeleton of spare parts from other Final headphones, or that they didn’t have a price yet. At the time, those seemed like mere details to be filled in later. But alas, it’s precisely the matters of comfort and price that have dramatically dampened my initial enthusiasm for Final’s D8000.

The final Final D8000 headphones put on a lot of bulk relative to the early prototype I first tried last July. What was once a skinny and frail-looking construction is now reinforced with a machined aluminum-magnesium alloy housing, which should theoretically keep them as light as possible, but the headphones have ended up weighing a whopping 513 grams (1.13 pounds). That’s heavier than both the Oculus Rift and HTC Vive VR headsets, neither of which is lauded for its long-lasting comfort. The same issue is present with the D8000: no amount of padding or weight redistribution can truly offset the fact that these headphones weigh half a kilogram. 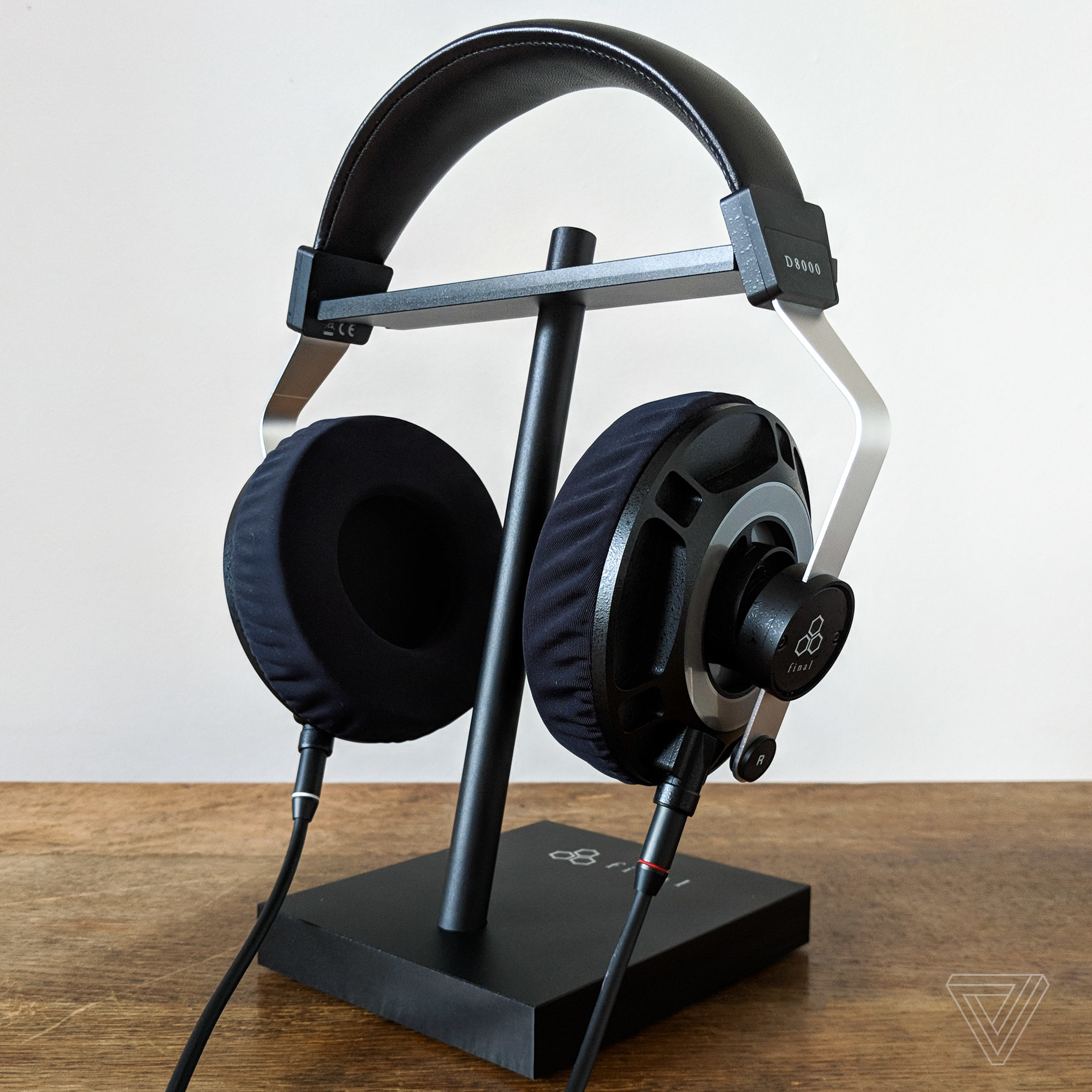 To its credit, Final does everything possible to ease the burden of wearing the D8000. Each ear cup is luxuriously spacious and padded out with a pleasant soft foam. My ears never feel hot or under any pressure. The headband is also well padded, and the cups have plenty of articulation and freedom of adjustment to let you seat these headphones upon your head precisely as you want them. I tried a variety of positions in my testing time with the D8000, but I could never find one that let me wear these headphones for longer than around 40 minutes without discomfort.

I might have said the heavy weight of these headphones was a forgivable trade-off for their sound quality, had they not cost, um, $3,799. Final is an enigmatic company that builds some of the best cheap earphones as well as some of the most opulently expensive ones, and it’s clearly unafraid to stray into luxury territory. In a world where people spend thousands of dollars on mechanical watches and bespoke car cosmetics, there’s obviously a market for a product like the D8000. But with such a high cost comes the expectation of a zero-compromise design, and that’s what Final hasn’t delivered.

You may be wondering what else there is to say about these too-heavy, too-expensive headphones, but I have to return to the thing that attracted me to them in the first place: the way that they sound. The D8000 have an amazingly detailed, balanced, and dynamic sound signature. There’s not much that’s laid back about them, as every bass drop and every high note is registered with emotive impact, but they never stray into being harsh or unpleasant. Combining the weight and the sound of these headphones, I always know I’m wearing them so there’s none of that magical disappearance of technology as I ease into simply enjoying the music. But that doesn’t stop me from enjoying the hell out of my music.

The bass extension of these headphones is scarcely believable. They use planar magnetic technology — such as you’d find on high-performing headphones from Audeze, MrSpeakers, and Hifiman — though Final has invented its own particular implementation that focuses on delivering more substantial bass than you’d usually get from planar headphones. I can’t say I’ve necessarily felt deprived of bass response with other planar magnetics, but the D8000 ratchet up both the quality and quantity to an unprecedented level. The low-frequency nuance that these headphones are capable of conveying is sensational. You need to hear them with an album like Ask the Dust by Lorn or Untrue by Burial, both of which explore bass-heavy electronic soundscapes with only fleeting shimmers of treble. The beauty of the D8000 is that they have this abundant resolution in the low frequencies without losing the sparkly high-frequency detail when it arises.

My preference for dour electronic music aside, the D8000 are just about the most genre-agnostic headphones I’ve heard. Rage Against the Machine’s “Killing In The Name” has me delighted within the first few seconds; every detail from the obvious (cowbell) to the subtle (reverb, echoes, and the guitar shifting from left to right) is rendered in crystalline fashion. Bjork, herself a genre-straddling musician, is also impeccably re-created by the D8000. Other albums that sounded excellent through these headphones: Mos Def’s The Ecstatic, Kendrick Lamar’s Pulitzer-winning DAMN, Nero’s Welcome Reality, Kimbra’s Primal Heart, Joe Hisaishi’s Spirited Away soundtrack, Rodrigo y Gabriela’s 11:11, Sevdaliza’s Ison, Pink Floyd’s The Dark Side of the Moon. If there’s a fault in the way the D8000 reproduce vocals, I haven’t found it.

The common problem with audiophile headphones is that they force you to choose between bumping bass and intricate high-end detail, but the D8000 really succeed in delivering both. The Focal Utopia, priced at $3,999, are the nearest rival to the D8000, and they’re a perfect example of that trade-off. Everyone who’s heard the Utopia has been thrilled by that headphone pair’s precision but yearned for a touch more bass. The Final D8000 have the bass necessary to anchor any performance, and I’m unable to find any music that doesn’t sound right through them. Mind you, these headphones still demand that you invest some extra cash in getting a good headphone amp, but they’re not excessively demanding: I’ve been able to power them with Woo Audio’s WA7, Astell & Kern’s Acro L1000, the Chord Hugo 2, and the Rupert Neve RNHP amplifier.

The Final D8000 have won awards in their native Japan, and I can easily see (or, more accurately put, hear) why. Everything about these headphones has been engineered from the ground up, including the custom stand that comes in the box. They’re assembled by hand in Final’s HQ in Kawasaki, and they are obviously a labor of much love and science. It’s hard not to like or appreciate a product of that kind.

If the Final D8000 weren’t heavy enough to cause a pressure hot spot to form at the top of my head, and if they didn’t cost a small fortune, I’d be celebrating them as a triumph. But reviews have to rate what is, not what might be, and so I find myself in the surreal position of not recommending a pair of the best-sounding headphones I’ve ever heard.