Sony’s futuristic earbuds are a pain in the present

Share All sharing options for: Sony’s futuristic earbuds are a pain in the present

I’ll never feel good about wearing them. That’s the main hump I can’t get over with Sony’s Xperia Ear Duo wireless earbuds, which look nothing like other earbuds you’ve worn — and not in a good way. The idea behind them is unique: the Ear Duos wrap around the underside of your ear and have a big hole right in the middle of the part that fits into your inner ear. (These don’t actually slide into your ear canal.) This design allows you to hear your surroundings just as well as you would without them on.

So all of the audio that you’re playing over Bluetooth — music, podcasts, audiobooks, videos, etc. — is mixed with that unimpeded awareness of your environment. You can wear them anywhere and not miss a beat if someone talks to you. It’s like an ambient soundtrack to your day that never interferes with anything. I’m sure that’s a concept that plenty of people would want, but Sony’s execution is foiled by an odd design, mediocre sound, and at $280, way too high of a price. 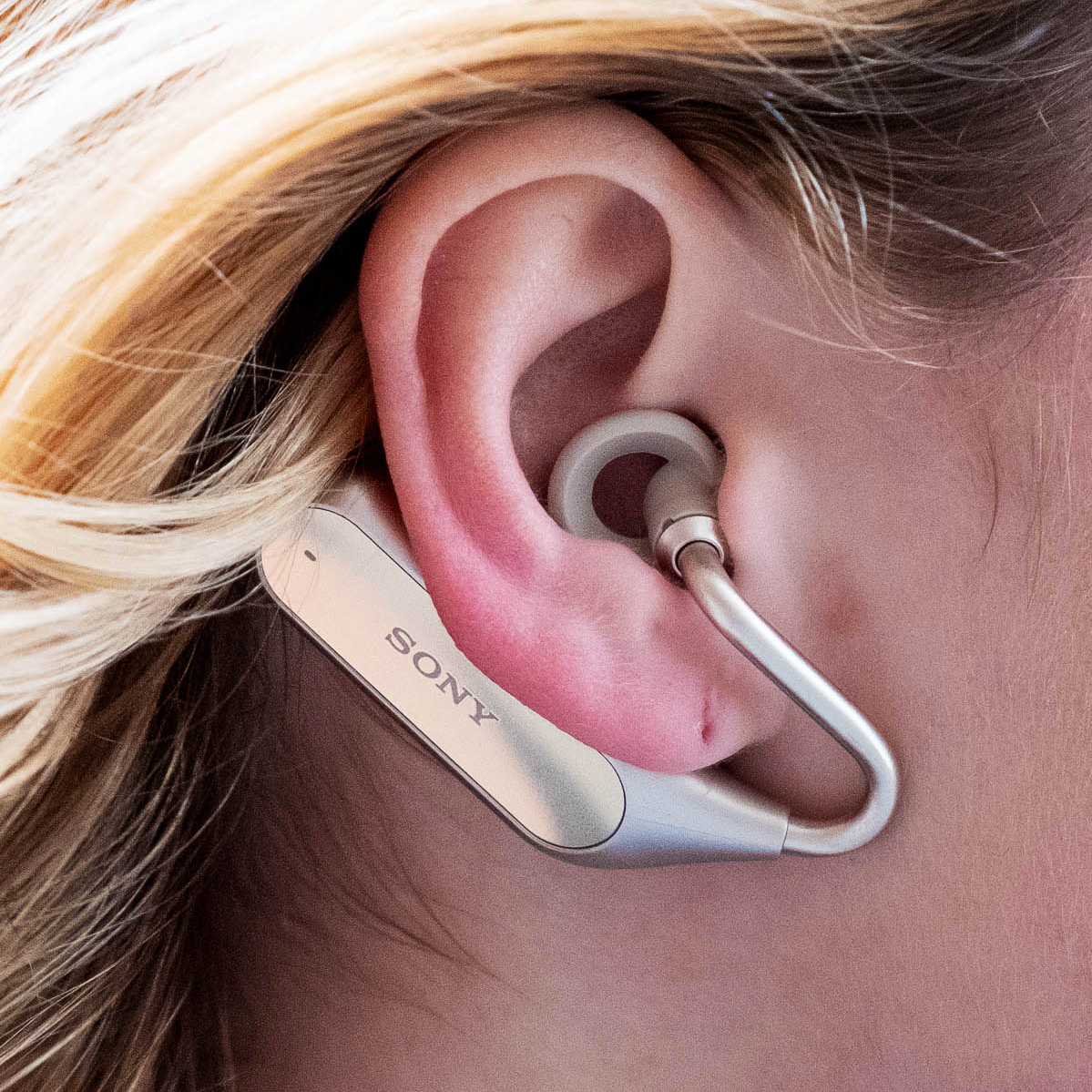 The overall look of the Ear Duos hasn’t changed much since Sony first showed them in concept form in early 2017. When wearing them, I’m most often told they look like hearing aids. One person said they look like a sex toy. Rarely does anyone have praise. The audio drivers and what Sony calls a “spacial acoustic conductor” are in the large housing that rests behind your ear when they’re on. Sound is routed through the little pipe under your earlobe and up to the silicone “ring supporter” that sits in your ear. Music is played into your ears, but your ear canal remains unobstructed. The earbuds don’t really leak noise to a noticeable degree, so you don’t have to worry about annoying the person one desk over at your office.

But putting these things on is awkward and can be an uncomfortable process. It’s more of a hassle than any earbud I’ve ever tried. Beyond the soft silicone bit for your ear, there’s zero give or flex to the Ear Duos, and I was genuinely perplexed as to how to get them on at first. It seemed like my ears were just the wrong shape or size for them. Sony recommends fitting them by tugging your earlobe out and down a little bit, and that does make it easier to slide them on and up. Eventually I got there. But despite having used them for well over a week, I still haven’t gotten much quicker at putting the Ear Duos on.

Once they’re on, they’re light and feel fine during extended wear. The battery lasts for up to four hours for audio playback, and the clamshell case holds three additional charges. And that case charges over USB-C! Sony finally made the change for these, but so far not for its other consumer earbuds.

There are no physical buttons on the Ear Duos, so controlling them is done entirely through taps and gestures on the touchpads behind your ears. Tapping something behind my ears felt a bit unintuitive and clumsy, but the earbuds responded as they should most of the time. It just takes an assertive tap; light touches don’t register so well. Let’s break those controls down:

But Sony’s gestures don’t stop there. The Ear Duos have an accelerometer and gyroscope built in, so they’re capable of detecting head movements as well. Sony is Sony, so of course it took advantage of this. You can:

They might seem silly, but if you’re out walking the dog or holding groceries and your hands aren’t free to reach behind your ear, the quick head turns to skip tracks aren’t the worst idea. But you will trigger them when you don’t mean to, so I turned off the head gestures almost immediately.

For Android users only, Sony includes its own digital voice assistant, called Daily Assist, in addition to supporting Google Assistant. When enabled, Daily Assist can speak your notifications aloud immediately as they come in, automatically lowering your music volume as it reads (in a very robotic, text-to-speech voice) the messages, emails, calendar reminders, and other alerts you’re getting. You can customize which apps get this treatment to limit it to the important stuff and avoid driving yourself nuts.

Daily Assist lets you dictate responses to texts, but I prefer Google Assistant for handling that task (and trust it more). There’s also a daily rundown of your day, and when Sony’s helper gave me my briefing one morning, it started off by telling me “it’s National Sunglasses Day.” It followed that up with the weather forecast, calendar appointments, and then spouted off a random mix of news headlines — first community grief over a local murder, and then the DoJ’s approval of Disney’s 21st Century Fox bid. I guess that’s fine?

The company claims that Daily Assist also provides info based on your location (weather, I guess), time of day (briefing), and activities, but I never once encountered the latter. From a user’s perspective, I just see zero reason for Sony to have its own assistant around when all of this stuff is better covered by Google Assistant. On Android, the Xperia Ear Duo app keeps up a persistent notification whenever they’re turned on, and also causes notifications for using excessive battery. Hopefully Sony addresses both of those things with an update.

Music quality on the Ear Duos is just okay. Since there’s no ear seal, bass and the low end have been very weak in my testing. Even without much boom, the Ear Duos avoided sounding shrill or harsh in the upper frequencies when cranked up, which I often found myself doing to compensate for nearby noise. But I think they sound worse than most other truly wireless earbuds on the market (including Sony’s other offerings). And it’s not just because of the very open / hear-everything-around-you design. Connectivity between the two buds was reliable with barely any dropouts in my experience with them.

Let’s talk about the scenarios these are made for, because there are definitely limitations. At home or your office? Check. Walking or running outside? Sure. They stayed on just fine and never came loose during my evening runs. But in cities, the volume doesn’t really get loud enough to overcome honking cars or bustling streets. That’s probably good for your ears, but not very practical when you just want to hear the latest episode of your favorite podcast. They’re absolutely useless on the New York City subway, and they’d do you no good on an airplane.

And then remember that the Ear Duos cost $280. I find it incredibly difficult to justify spending that kind of money on these things. What are you paying for? All the R&D that went into making them? Sony certainly tried something new and out-of-the-ordinary with the Ear Duos. They’ve got all the hallmarks of a weird, quirky Sony gadget. But that doesn’t mean they’re good. If you need awareness of surroundings, I’d recommend AirPods or many other wireless earbuds that have a semi-open design and let in a fair amount of outside noise. They’ll sound way better, too.

Photography by Chris Welch / The Verge.