The Asus ROG Phone has a 90Hz screen, vapor cooling, and a plethora of gaming accessories

This is the latest, zaniest attempt at making gaming phones happen

Share All sharing options for: The Asus ROG Phone has a 90Hz screen, vapor cooling, and a plethora of gaming accessories

Asus is starting off Computex 2018 on a high-spec note with the announcement of its ROG Phone. Bearing the Republic of Gamers branding and an unmistakably gamer-oriented design, the ROG Phone is Asus’ answer to the Razer Phone. This is the second phone after Razer’s to offer a 90Hz display — meaning its screen refreshes 90 times per second, delivering smoother animations — and Asus throws in the added bit of gamer pride by powering each ROG Phone with a specially selected 2.96GHz Qualcomm Snapdragon 845 chip. Yes, these will definitely be the fastest Snapdragons around.

I got to see engineering samples of the ROG Phone for myself here at Computex, and I walked away feeling more impressed by the actual hardware than I expected, though the premise of an Android smartphone for hardcore gamers still feels like it’s off the mark. Android doesn’t have any games demanding enough to tax the regular Snapdragon 845, never mind an overclocked variant with vapor cooling and a special attachable fan accessory, which is what the ROG Phone offers. What I see in this device is a bizarre transplantation of the traditional PC gamer’s aesthetic and performance priorities into the mobile realm. Even as I question who this device might be for, I am also deeply intrigued by its design, customizations, and deluge of gaming-centric attachments.

You’ll find the full set of ROG Phone specs in the sidebar, and they’re predictably maxed out. Nobody has offered a phone with more than 8GB of RAM, no one has a faster Snapdragon inside their phone, and other than the Porsche Design variant of the Huawei P20 Pro, I know of no other phone with a 512GB storage option. Asus ticks the “best-specced Android phone ever” box.

To activate the maximum performance of its speed-binned chips, Asus lets you switch into “X Mode” by squeezing the sides of the phone. The squeeze works exactly as it does in HTC’s Edge Sense system, with a red glow showing up at the sides where you apply pressure. Once you give it a strong squeeze, the phone’s entire UI skin transforms from a cool blue to a deep and ominous red. X Mode is more than mere cosmetics, though, as it automatically optimizes performance for gaming by shutting down background processes and prioritizing whatever you’re playing for both RAM allocation and data transfer precedence. X Mode also controls the AeroActive Cooler, which is what Asus calls the additional fan accessory it offers for this phone.

Asus goes an extra step with its phone-edge interactions by giving players two so-called AirTriggers, residing in the spots of the usual shoulder buttons on game controllers. These are user-programmable and should help keep the screen clear of controls while gaming. 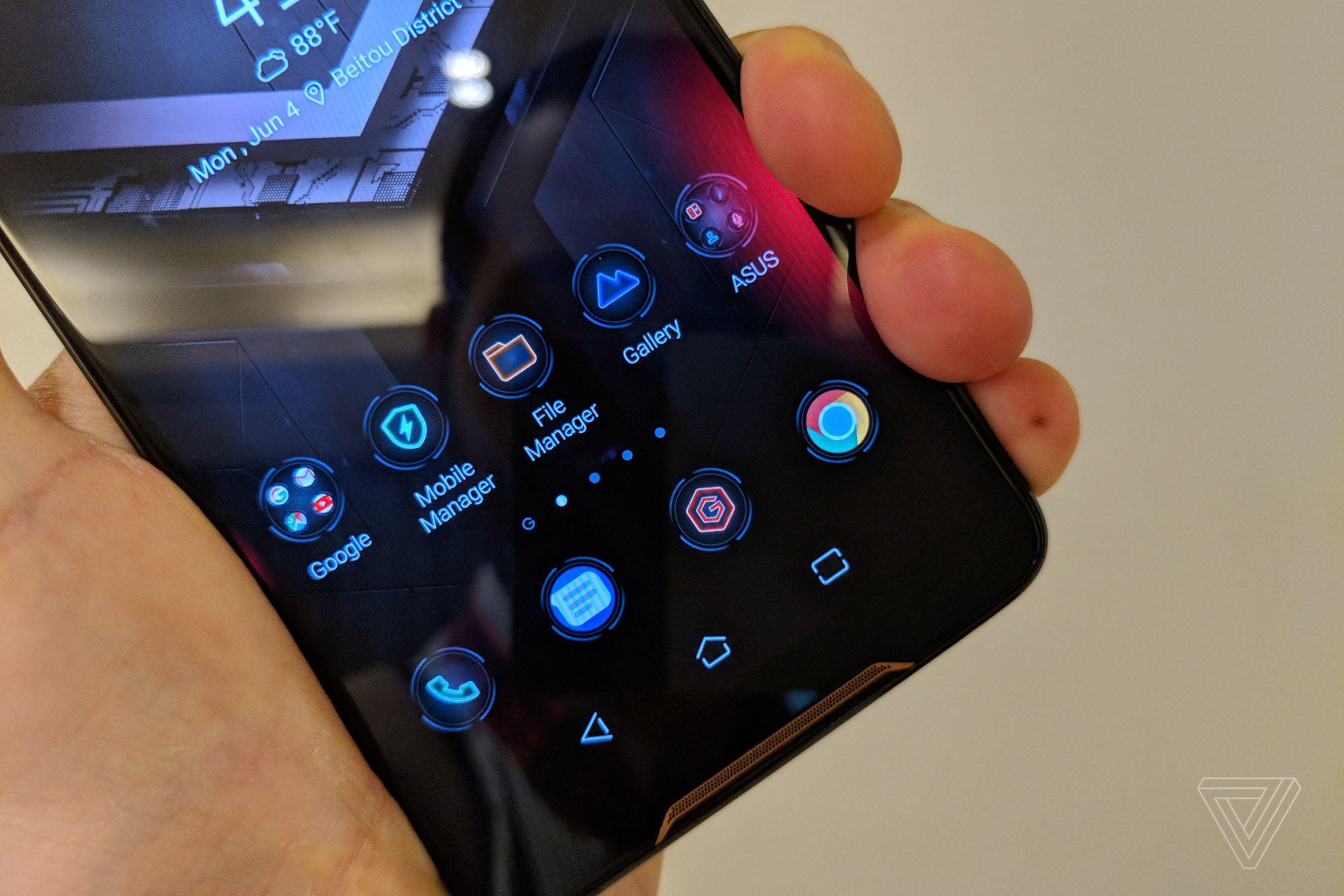 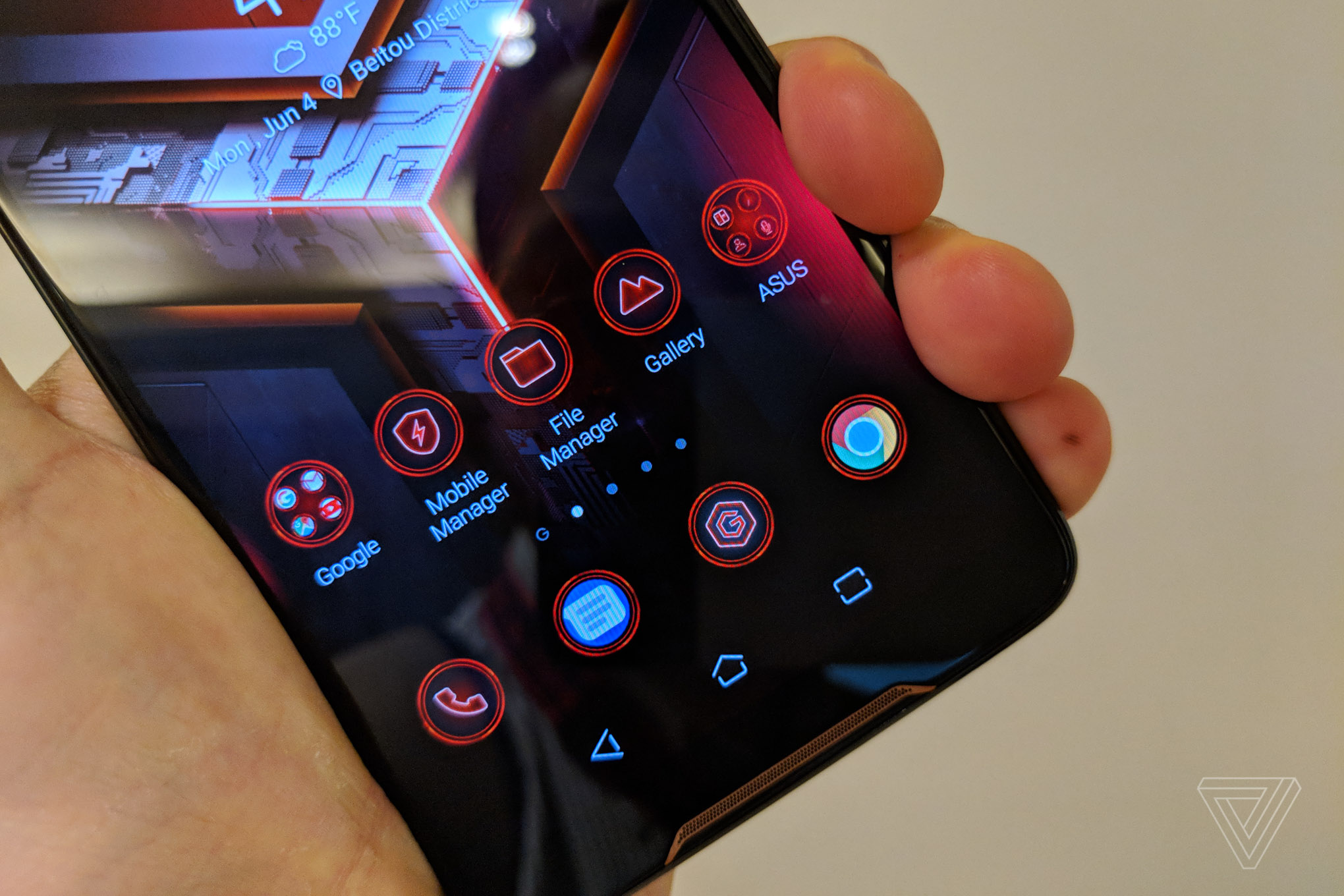 Squeezing the sides of the ROG Phone activates the gaming-optimized X Mode.

The accessories are a big part of the story with the ROG Phone, as Asus offers a whole bunch of them right off the bat. There’s the classic gamepad setup, which puts a couple of analog sticks, two sets of physical shoulder buttons, and some gaming keys on either side of the phone’s landscape display. This Gamevice controller works in tandem with a WiGig Dock to wirelessly stream — using 60GHz 802.11ad Wi-Fi — your game to a connected nearby TV. I tried it with a racing game, and I didn’t notice any tangible lag between my actions with the controller and response on the screen. The gamepad isn’t bad, but I’ve yet to see any of these pad attachments become truly popular, so I remain skeptical about how much use it would get.

Then there’s also the clamshell accessory with a second screen that turns the ROG Phone into a dual-screen device. It’s called the TwinView Dock, and it’s huge and chunky, owing primarily to its 6,000mAh battery within. It has a matching 6-inch, 1080p screen, just like the ROG Phone, and it adds shoulder buttons, enhanced force feedback, a front-facing quad-speaker system, and extra cooling. Asus’ idea is that you might use this setup for marathon gaming sessions, with the second screen display chat related to the game on the main one. My experience with this accessory was very awkward, as the software was unintuitive and the construction was way too early to judge in terms of quality or durability.

Asus also has a dock with a ton of cable ports on the back, allowing you to use the ROG Phone as either a pseudo-PC connected to a monitor, keyboard and mouse, or as an auxiliary display to your regular PC. This, like all the other accessories, attaches via a special side port on the ROG Phone (which is at the bottom of the device when it’s turned to landscape). This extra-wide port contains a regular USB-C connector and a proprietary Asus one right next to it. Aside from all of the peripheral possibilities, I very much like the idea of being able to charge my phone with the cable plugged in at the bottom while I’m watching something or gaming on it.

It’s impossible not to be impressed by the sheer amount of thought and engineering that Asus poured into the ROG Phone. This device and its mini ecosystem of gamer-friendly accessories have clearly been in the works for a while. It’s one of the most sincere and ambitious efforts to make Android gaming phones a legitimate category in its own right. I still think the task is an uphill one, but Asus deserves credit for putting its best foot forward.

The price of the ROG Phone and its suite of accessories isn’t being announced at Computex, but Asus tells me it expects to have this phone on sale in the third quarter of this year. Given the ludicrous specs, we should probably brace ourselves for an uncompromising price to go along with the uncompromising performance.

MSI’s 32-inch, curved gaming monitor is on sale at Walmart for $160 off

I had to see these Hello Kitty gaming accessories, so now you do, too