Acer Nitro 5: gaming on a budget

A reliable budget gaming laptop, but it’s no esports champ

Share All sharing options for: Acer Nitro 5: gaming on a budget

The requirement for a decent gaming laptop shouldn’t be over $2,000, especially if it’s your first system or if you already have a laptop but just want to play games casually. What can you do to join the PC gaming community? You want a system capable of playing some, if not all, of the popular PC gaming titles, like Counter-Strike, Fortnite, Overwatch, League of Legends, Rainbow Six: Siege, and PUBG.

So what can it do? It turns out, a decent amount, provided you temper your expectations.

Our review of Acer Nitro 5 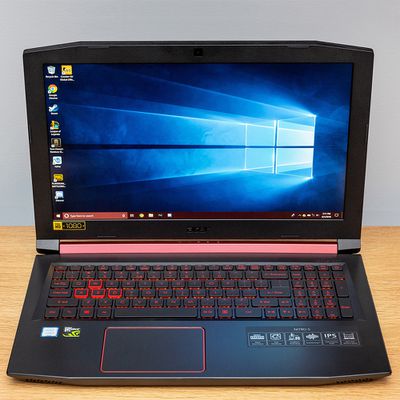 Acer’s marketing jargon notes that the Nitro 5 is designed for gamers and gamer-oriented people. That’s not entirely wrong. The Nitro 5 has a lot of the aesthetic touches common to gaming laptops: aggressive styling, edgy corners, large fan vents, hardware monitoring software (including fan control), red keyboard backlighting, and red trim everywhere (even around the touchpad).

But all those frills are surface layer because the build quality and rigidity of the Nitro 5 is flexible. Literally, it’s flexible in the palm rest, lid, keyboard, and touchpad. It doesn’t even take excessive force to see the chassis give way slightly. In a more expensive gaming laptop, this is unacceptable, but I’m willing to acknowledge that at least Acer tried to make the Nitro 5 look like a quality gaming laptop, even if it’s made of plastics and metal accents.

Regarding portability, the Nitro 5 weighs a hefty 5.95 pounds, so it’s definitely not a thin-and-light system, and it’s better suited for the occasional commute to a LAN party or around the house.

Regarding portability, the Nitro 5 weighs a hefty 5.95 pounds

Any decent PC gaming machine has a variety of ports so you won’t have to worry about buying dongles. Thankfully, the port selection of the Nitro 5 checks out: a 3.5mm audio jack, one USB-C 3.1 Gen 1 port, one USB 3.0 port, two USB 2.0 ports, an HDMI 2.0 port, Ethernet, power jack, SD card slot (which supports up to 128GB cards), and a Kensington lock slot.

The rule of thumb is that a gaming laptop should have enough ports to connect to one monitor, a keyboard, an external mouse (which is a necessity), and speakers. The Nitro covers all of those bases and then some, so using it as a gaming machine on a desk with an external keyboard, mouse, and monitor that matches the laptop’s resolution is entirely possible.

As a productivity workhouse, the Nitro 5 couldn’t appear to be more out of place. It has bright red backlight keys (that still have red font with the backlit turned off), a trackpad with tons of flex, and a screen with a max-brightness setting that isn’t very bright at all compared to other higher-end gaming laptops I’ve tested recently.

As a gaming system, it’s an eerily familiar experience. Nearly all PC gaming laptops have a myriad of crazy keyboard fonts, colors, and exaggerated, aggressive chassis designs. Only a few work and are stylized as if they’re suitable for competitive play and productivity in the office. The Nitro 5 isn’t an exception, but it doesn’t mean it’s horrible at playing both roles.

The Nitro 5’s display is locked at 60Hz and 1080p resolution — the sweet spot for entry-level PC gaming — but it didn’t impress me at first glance with its color reproduction and gargantuan bezels. A 60 fps screen is good for casual gaming, but your visual acuity will be outclassed by competitive players using 144Hz monitors, who can see more detail per frame, ultimately resulting in a smoother visual experience.

The keyboard has a decent amount of travel and relatively quiet keys. The trackpad is unusable for MOBA or FPS games, but it’s large and comfortable for web browsing. The speakers do a decent job of filling a conference room with in-game sound. Fan speeds can disturb your co-workers or classmates while playing games, but they can be controlled via the Nitro Sense app.

Battery life on the Nitro 5 is acceptable at around 5.5 hours for casual web browsing. While I don’t see a road warrior going for the Acer, it’s entirely capable of being somewhat of a mobile workhorse. Attending a lecture and playing a full 40-minute game of League of Legends is doable.

Games that were playable at high settings and 60 fps included Counter-Strike: Global Offensive, League of Legends, and Overwatch, which are all popular PC games frequented by both casual and competitive players alike.

The Nitro 5’s GTX 1050Ti does struggle a bit more with popular graphics-intensive games like Rainbow Six: Siege, Arma III, and PUBG. To make those games playable at 60 frames per second, I had to turn down graphics settings to medium-high, while completely turning off additional settings like anti-aliasing and bloom effects.

if you’re sharpening your skills and eliminating foes in multiplayer games, does it really matter how much eye candy you have?

The Acer Nitro 5 has lower-end specs for a gaming laptop, but it’s a good budget option that can play current PC games at medium settings (and sometimes at high settings). It also serves as further proof that gaming laptops under $1,000 are no stretch of the imagination. If you’ve never had a laptop capable of playing PC games before and don’t have a large budget, it’s a modest but functional way of getting started.

After all, if you’re sharpening your skills and eliminating foes in multiplayer games, does it really matter how much eye candy you have?

The verdict is in: watch the new PS5’s heatsink put to the test