Boosted’s new Board Stealth is the electric skateboard company’s fastest and most expensive model. Though the $1,599 Stealth has a similar design and features as Boosted’s other boards, it sets a new record for speed: 24 mph. The Stealth can keep its high speed for up to 14 miles between charges, thanks to its removable extended-range battery.

There are a lot of prerequisites for a great electric skateboard: it has to be able to go fast, have excellent stopping power to swerve in and out of situations (like when a driver or rider cuts you off), and have a decent battery range if it’s really going to be a viable alternative to other forms of city transit like the subway, bus, or bicycle.

The Boosted Board Stealth has speed, range, and a new paint job. But is the most expensive electric skateboard from Boosted worth the cost?

Our review of Boosted Board Stealth 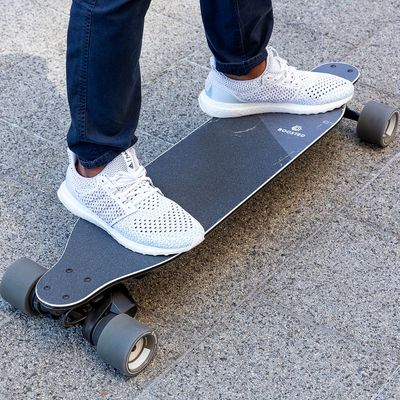 Compared to other electric skateboards, Boosted’s models have always been easy to ride and accessible to new riders. Thankfully, this hasn’t changed with the Boosted Stealth. Inexperienced riders can still pick it up and learn the ropes with it just like any other Boosted board.

Every mode has a little more torque

Once you are comfortable riding, you can unlock the Stealth’s true speed potential through a “Hyper” fifth riding mode (which can be accessed via the Bluetooth remote or phone app). It allows you to hit the 24 mph top speed, which is 2 mph faster than what other Boosted models can reach.

However, overall acceleration is cranked up, and there’s less trigger-pulling required to reach higher speeds. That’s due to the Stealth’s more powerful 2,100W motor, compared to the 2,000W and 1,000W motors in the Booted Plus and Mini X, respectively.

The Boosted Stealth also benefits from the same full deck overhaul within its flexible composite deck as the Mini and Plus. This consists of vibration dampening, foam, fiberglass, and a poplar core that improves the ride on rough surfaces better than a bamboo deck. Boosted’s new, 190mm trucks are tuned out of the box, and they helped with carving at top speeds on the not-so-smooth roads of SoHo with no wobbling or sudden jolts.

Aesthetically, the only difference between the Stealth and Boosted’s other boards is its complete lack of color. Boosted even made the 85mm wheels gray, staying true to the Stealth’s name. Personally, I enjoyed the orange wheels.

The Stealth is just as heavy as the similarly sized Boosted Plus, which weighs 17 pounds, while the smaller Mini X board weighs 16.8 pounds. That makes transporting it just as cumbersome and tiresome if you need to stop and pick it up often.

The Boosted Board Stealth comes preinstalled with the extended-range battery, which Boosted says will net you 14 miles of shredding the streets. In real-world usage, I found this figure to be accurate, especially you stick to “Pro” or “Expert” modes (the third and fourth highest speeds) to conserve more energy.

Rolling down hills and braking to engage the regenerative braking feature (which you access by pulling the trigger on the remote back slightly) will allow you squeeze a bit more out of a full charge. Recharging the battery fully takes an hour and 45 minutes. Boosted does offer replacement batteries for $399 each, but swapping them out is a process that requires removing and reinstalling six screws, which isn’t convenient when you’re on the go.

If conserving energy isn’t your concern, then engage “Hyper” mode. (Yes, that’s the Tesla-esque name of the Stealth’s fastest mode.) It provides 25 percent hill grade for climbing with that 24 mph top speed. (Keep in mind the NYC speed limit for cars is 25 mph, so this skateboard can haul.)

The Boosted app has also been updated to sync with the Stealth’s new “Hyper” performance mode. While you still can’t control the board via the app, you can access vital info like battery life, total mileage, which mode is currently engaged, and you can add a digital name for your board.

The wheels offer grippy, almost sticky traction on paved roads. And combined with the Stealth’s faster acceleration, they make it possible to beat cars and bikes when the light turns green. Don’t get me wrong: the extra speed from the Stealth is terrifyingly fun, and it has a solid battery range. Its grayed-out aesthetic makes it unique in the sea of hypebeast electric skateboards, especially those with orange wheels.

The best board — if you need the speed

Going for the Mini or the Plus is a no-brainer if you’re just getting into the game and you want something that still goes fast — the $999 Mini X tops out at 20 mph, and the $1,399 Plus hits 22 mph — but is also less costly. Just remember to wear a helmet and stay off the sidewalks, please.