The Asus Republic of Gamers Strix Scar II — which is an egregious name for a $1,999 laptop — checks off most of the needs of a mobile gamer sans one: work-acceptable design. If you told me five years ago that gaming laptops in 2018 would still have designs featuring RGB lighting, camo, and ostentatious logos, I wouldn’t have believed you. Yet, here we are.

At its core, the Scar II has two out of the three ingredients we outlined that make up great gaming laptops. It has the ability to play demanding titles at high / ultra settings on a color-calibrated screen with thin bezels and the ability to last as long as I’d like on battery power.

None of that is surprising if you look at the core specs: an eighth-gen Intel Core i7-8750H six-core processor, 16GB RAM, 256GB + 1TB SSHD configuration, and Nvidia GeForce GTX 1070 graphics. In the Scar II’s case, Asus went with the full-speed mobile chip and not the battery-conscious Max Q version. 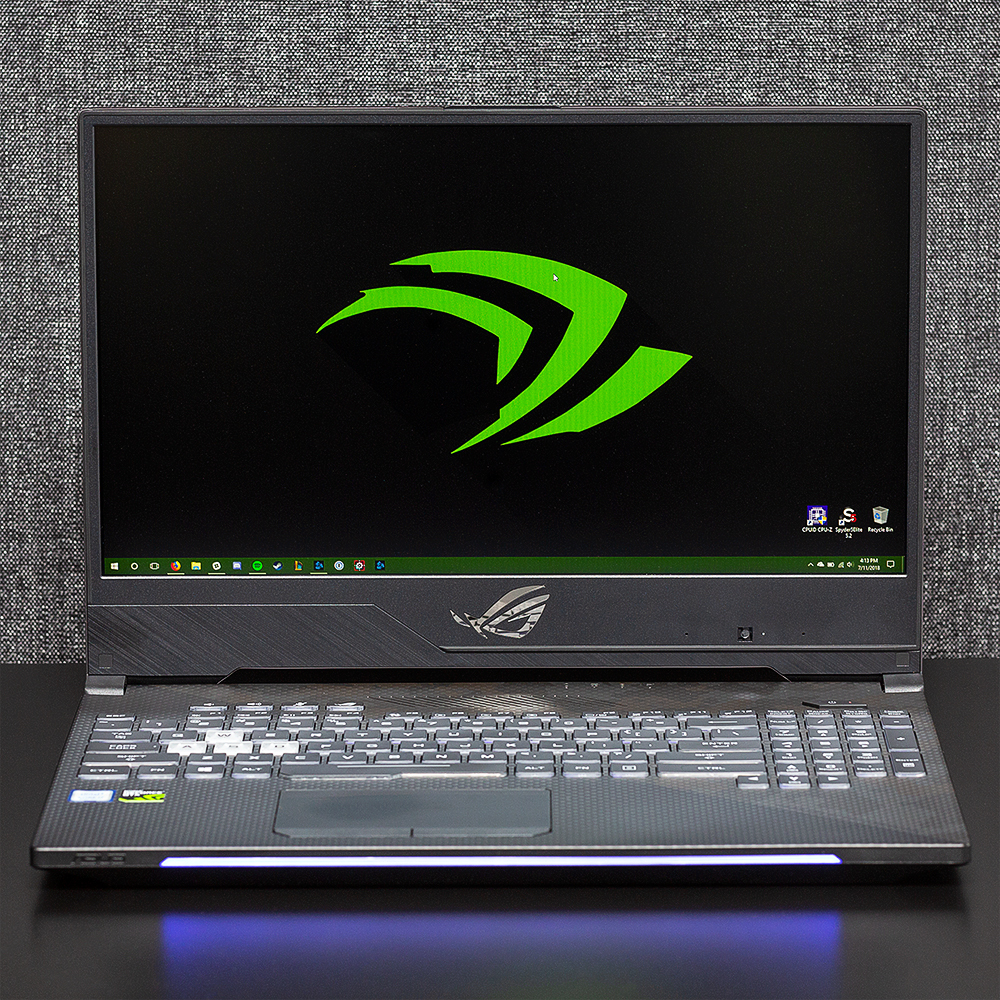 The Asus ROG Strix Scar II weighs a full five pounds, making it the smallest and lightest gaming laptop with full mobile Nvidia graphics, and it shifts it to an unusual spot between a thin and light gaming laptop and massive powerhouse.

A laptop like this can be tethered to multiple monitors, a gaming mouse, keyboard, and other accessories while still looking like the gaming centerpiece it is, with flashy RGB lighting and camo palm rest.

The Scar II doesn’t have a great battery life for traveling users, and it doesn’t look like a work machine for anyone who wants a dual-purpose laptop. The Scar II is absolutely a gaming machine first, and everything else is second. But it’s so compactly built and reliable that it ends up feeling like it’s in a category of its own.

Not thin and light but also not a ton of bricks

Some great gaming laptops suffer from build quality issues. Thankfully, that’s not the case with the Scar II: the chassis is sturdy and doesn’t suffer from flex when force is applied to the touchpad, keyboard, or the lid. The Scar is also a thick and hefty laptop at 1.02 inches thick and 5.2 pounds, making it more of a “small tank” of a laptop rather than a full-bore heavyweight. (Believe it or not, compared to the full-power gaming laptop competition, this counts as small.)

Asus applied different surface treatments on the lid and faux carbon fiber print on the palm rest to give it a “gaming feel.” There’s even a much-needed anti-fingerprint coating for the palm rest, which does a great job of masking (if not nullifying) oily fingerprints against the smooth black surface.

However, as a gamer, I’m unconvinced that most of the Scar II’s “gaming-oriented aesthetic” is more than just gaudy branding and an excessive use of camo. This is a laptop where RGB backlighting for the whole keyboard isn’t enough; Asus also includes an RGB light strip on the bottom lip and a light-up Republic of Gamers logo on the lid (both of which can be turned off).

I get that gaming laptop designers want this thing to look badass, but, instead, it just looks tacky.

Asus’ unusual design strategy with the Scar II goes beyond printing camo on the palm rest. It also incorporates white WASD keys since white keys stand out, and they’re the keys FPS players use most. Asus even has an entirely separate SKU for this laptop called the Hero II, with identical specs but white-out QWERTY keys that are appropriate for MOBA games like League of Legends.

Aesthetics aside, the keyboard as a whole is a joy to type on. It has adequate travel and not a lot of noise for each key press. The directional keys mirror a full desktop keyboard layout by being located some distance away from the other keys alongside a numpad with dedicated volume control, mute, and “Gaming Center” keys located above the Function key row. The keyboard revolves around gaming and button mashing, and it’s also good for its side hustle: typing long documents.

The Scar II’s Precision touchpad is also easy to use and comfortable, with support for all of Windows 10’s gestures. The touchpad surface is smooth, with accurate cursor tracking and two soft keys for the left and right mouse buttons. It’s no substitute for a gaming mouse, but it works well for editing and web browsing.

The Scar II is using a 15.6-inch FHD IPS screen with a 100 percent sRGB color gamut, 144Hz refresh rate, 300-nit brightness, and a 3-millisecond response time. Using a Spyder5 colorimeter, I was able to confirm that the Scar II’s color reproduction works at 100 percent of the sRGB spectrum. In person, it definitely looks the part.

Unfortunately, you’ll be giving up G-Sync (Nvidia’s anti-screen tearing technology) on the Scar II. But you’ll likely be able to gloss over it with the raw power of the GTX 1070 GPU.

I never felt bereft without G-Sync when using this laptop. The Scar II’s screen produces a bright, vivid, and smooth visual experience without being surrounded by thick bezels. The panel is similar to the one on Asus’ own Zephyrus GM501 laptop, which had gigantic bezels. The Scar II, however, has much narrower bezels on the top, left, and right. It makes a huge difference in how immersive gaming can feel on this laptop.

That immersion is somewhat of a Pyrrhic victory, however, because the bottom bezel and logo are ridiculously oversized. Consequently, the Scar II features the worst webcam placement on a laptop — the far bottom right — which makes it nearly impossible to get a centered shot when video chatting. Furthermore, the Scar II is yet another gaming laptop without Windows Hello fingerprint or facial recognition.

The Scar II’s side-firing speakers are excellent. They have a loud but clear and unmuffled sound profile that’s supported by tons of bass. They’re great if you want to game alone and out loud or if you decide to watch a few videos with friends or roommates. I haven’t come across a gaming laptop with better speakers, so it’s definitely a welcome surprise.

The Scar II has excellent speakers

If you’re spending $1,999 on a gaming laptop, you shouldn’t expect anything less than high-end gaming performance (high or ultra settings in-game). The Asus Scar II delivers on that. Non-intensive titles like League of Legends, Overwatch, and Counter-Strike: Global Offensive run at their best graphical settings, a steady 144 fps. Some games that take a little more graphical prowess, like Destiny 2 and Rainbow Six: Siege also run at ultra settings but hover around 100 fps. Lastly, a resource-hog like Arma 3 requires that you make a few tweaks before you can hit triple-digit frame rates, but it’ll still look great.

It might not make you play better, but it plays well

Gaming on the Scar II is a fun experience — not just because it has the processing power for popular FPS titles, but because it makes playing them enjoyable. Unlike some other laptops, the keycaps aren’t too small or too tightly packed together. The display comes with a color preset for gaming so you can pay closer attention to other player’s shadows or, better yet, be able to hear them, thanks to the loud and bass-rich speakers.

You’d be hard-pressed to not enjoy your favorite game on the Scar II, regardless if you’ve previously owned a gaming PC or not.

As a productivity machine, the Scar II does a good job of staying quiet and cool when doing anything other than playing games. You can also control the fan speed, which directly affects the performance of the GPU in 3D applications. “Silent” mode works when you don’t want to hear the dual-fan system kick-in; in “Overboost” mode, the fans hit their fastest speed, cooling the system quickly. (But you can still hear them while wearing headphones.)

The fans can be loud when playing games

By default, the Asus Scar II uses a “Balanced” fan mode, which gets loud only when you’re playing games. It’s the setting I ended up using most. Overall, Asus has done a great job addressing heat dissipation on the Scar II. The underside and fan vents get hot, but the palm rest remains cool.

The Scar II doesn’t fair too well at battery tests, even when using a balanced power setting, dimmed backlighting, and usage based on web browsing and watching videos. You’ll get no more than four hours on a full charge, which is far below the five to eight hours you can get with Max Q gaming laptops but still better than other machines with full mobile GPUs. Asus’ own Zephyrus, for example, couldn’t even hit three hours.

In a class almost its own

If you’re in the market for a thin and light laptop that’s capable of playing games at respectably high settings and can last six hours on a charge, look toward the Razer Blade 15 or the MSI GS65. The Scar II is the smallest and lightest of the gaming laptops with full mobile Nvidia graphics, so it falls into a unique spot between a thin and light gaming laptop and tanky powerhouse.

Maybe that explains all the camouflage.