The way it should be done

By Stefan Etienne@StefanEtienne Jul 2, 2018, 10:00am EDT
Photography by Amelia Holowaty Krales / The Verge

Share All sharing options for: Dell XPS 15 2-in-1 review: jack of all trades

Dell’s latest 15-inch XPS 2-in-1 is a high-end laptop that appeals to creative users: people who need power and portability, and might also appreciate a touchscreen and a stylus. It plays in the same field as HP’s Spectre x360 15, Microsoft’s Surface Book 2, and Apple’s 15-inch MacBook Pro.

Right out of the box, Dell gets most things right with the XPS 15 2-in-1, with a just few areas that need improvement. Its build quality, attention to detail, power, and flexibility add up to a high-end experience that matches its premium price.

It’s fair to say you get what you pay for with the XPS 15 2-in-1. It starts at $1,299, but the model I’ve been testing costs nearly a grand more at $2,199. That price gets a quad-core Intel Core i7 processor, 16GB RAM, a 512GB of storage, a 4K touchscreen, and AMD’s integrated Radeon Vega M graphics. The most costly part of that is the 4K screen, so you can save quite a bit by opting for the 1080p panel. No matter which model you buy, the Vega M graphics come along for the ride. It’s a solid package that I’ve been able to live and work with — mostly in harmony. 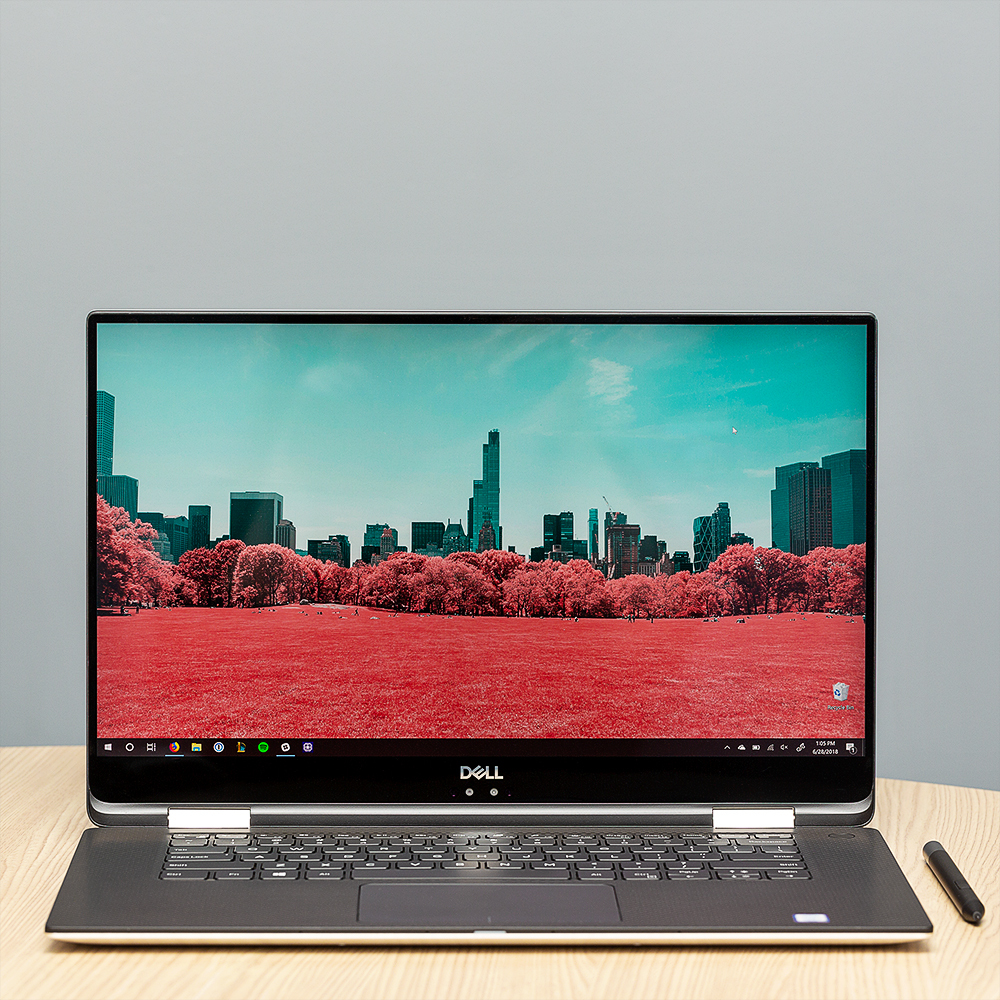 Looking at the XPS 15 2-in-1’s chassis is well, an unimpressive viewing — Dell’s XPS laptops have been using the same basic design language for years now and it looks dated. Most of the laptop is covered in metal topped with a silver finish, and when opened up, a faux carbon fiber palm rest. It has a rubberized, smooth texture that makes it by far one of the most comfortable palm rests I’ve used and despite being prone to fingerprints, it’s easy to clean.

Overall, the design might be boring, but the XPS makes up for that with excellent build quality. The palm rest, display, touchpad, and keyboard hardly exhibit any noticeable give — there are no wobbly underside or clicking fans here.

However, the Dell XPS 2-in-1 isn’t a lightweight, weighing in at almost 4.5 pounds. That’s more than the 15-inch MacBook Pro, Surface Book 2, and even some full-fledged gaming laptops. I don’t think anyone wants to walk around with a four-plus pound tablet, because it’s cumbersome and awkward to use, but since the XPS is a convertible, you can do that if you want.

No one wants a four pound tablet

The 360-degree hinge also lets you use the XPS in an easel or movie-watching mode, both of which are probably more practical than as a tablet. The hinge is quite sturdy and doesn’t have the horrible screen wobble so many 2-in-1s are plagued by. On the flip side, it’s very hard to open the XPS 15 2-in-1 with one hand, thanks to that stiff hinge and no cut out to slip your finger into.

When it comes to ports, the XPS 2-in-1 reminds me of the not-so-loved 15-inch MacBook Pro: two USB-C Thunderbolt 3 ports, two USB-C 3.1 ports with DisplayPort, an audio jack, microSD card slot (I’m not sure what to do with it), lock slot, and a battery level indicator. There’s no full-size USB-A port — which is a travesty — and while I appreciate the forward-thinking of including USB-C, user adoption still isn’t high enough for me to swear it off, then have to buy a dongle.

Dell does get your dongle collection started by including a USB-C to A adapter in the box, but I’d much rather just have the port built into the machine itself. Fortunately, you can charge the laptop using any one of the four USB-C ports.

The screen on the Dell measures 15.6 inches (with a 16:9 ratio), has thin bezels, and supports Dell’s included stylus. It’s the highlight of this XPS 15 2-in-1 unit, because this 4K display pops. By default, Dell sets Windows 10’s display scaling to 250 percent, which makes everything comically large — moving it down to something like 225 or 200 percent lets you better take advantage of the screen’s real estate.

Colors are bright, with tons of pop and contrast without too much image sharpening. The 4K option has 100 percent Adobe RGB certification (with some variance between displays), which is useful if you’re planning to do any serious image editing with it. Dell advertises 400 nits of brightness and while eyeballing it next to the Spectre 15-inch x360, the Dell definitely appears to be the brighter and better looking 4K experience.

Dell deserves credit for including a capable stylus with the XPS 15 2-in-1, unlike HP, which throws in a basic one, or Microsoft that doesn’t give you any stylus at all. The included pen has 4,096 levels of pressure and is the closest equivalent to the Surface Pen I’ve tested. It’s a great stylus, has good weighting, and draws with precision. It also supports angle input for shading.

The XPS 15 2-in-1’s keyboard is nearly as shallow as the MacBook Pro 15-inch, but other than that, there isn’t anything like it. It’s clickier, has better tactile response, and I find it more enjoyable to type on, overall. Also, it’s hopefully more reliable than Apple’s issue-prone keyboard. However, the backlight brightness is not as bright as I hoped and the Page Up and Page Down keys are unceremoniously located above the left and right directional keys — it’s just asking for an incorrect entry.

The trackpad is Precision-enabled, but is a tad small considering the overall real estate on the palm rest. Regardless, it has a fast, accurate input with support for all of Windows 10’s gestures, and the results are exactly what I look for: smooth.

Dell makes it very easy to log in to the computer by supporting both fingerprint sign-in — via the power button — and facial recognition via the IR camera, located at the bottom of the display, under the “Dell” logo. The webcam placement is a sacrifice made for the thin bezel design, but as I’ve found out before (and more than once) it’s entirely possible to have thin bezels and place the webcam where it belongs — at the top of the screen.

It’s been said before, but I’ll say it again: Dell’s camera placement means that all of your video calls will have horribly unflattering up-the-nose angles and your fingers will block the camera when you type.

“This Dell rips,” are words that I’d rarely ever say, but they are true about this XPS 15 2-in-1. Processor-wise, the Core i7-8750G is a speedy quad-core processor — that part is well-known — but there is little (if any) crapware installed upon first booting the XPS 15 2-in-1.

So your first few times using the system is clear-headed and uncluttered, as it should be. Photoshop, Lightroom, Premiere, and other Adobe suite apps should have no issue running in large batch operations here.

Where the XPS 15 2-in-1 surprised me in terms of performance was with graphically intensive apps, or rather, games. League of Legends can run at a consistent 60 fps and full 4K resolution. Counter Strike: Global Offensive runs just as well, but a graphics-intense title like Rainbow Six: Siege requires some settings tweaks, to a lower resolution with less eye candy. It won’t hold a candle next to a purpose-built gaming laptop, but it’s still impressive because the XPS 15 2-in-1 wasn’t designed for gaming to being with.

I’m used to seeing just five hours of battery life with 2-in-1 computers that have 4K touchscreens, but the XPS 15 2-in-1 surprised me with seven hours of use between charges. It’s not as long as you’ll get with an ultrabook or Microsoft’s Surface Book 2, but it’s on par with the 15-inch MacBook Pro and other powerful laptops. The light-up battery gauge on the left side offers limited info as to how much battery is left, but it is useful for eyeballing it.

Dell has established the XPS 15 2-in-1 as one of the best laptops in its class. The XPS 15 2-in-1 blends all the benefits of having a 4K display, powerful chipset, and aesthetic integrity, without the user having to sacrifice too much battery life, excessive heat, or poor build quality. While the design choices of Dell still seem a bit dated, everything else about the XPS 15 2-in-1 performs as you’d expect… which is the right way.

The 4K screen is an expensive upgrade

The biggest issue might be the XPS 15 2-in-1’s price, which isn’t as high as a MacBook Pro or Surface Book 2, but still a significant cost. You can skip the 4K screen for a 1080 panel and save quite a few hundred dollars, while still maintaining many of the other qualities that make this XPS so good to use. You might even get better battery life and performance with the lower-resolution screen, but 4K just makes it that much better because of the Adobe RGB support and resolution.

Although the XPS 15 2-in-1 is a very expensive laptop with a boring design, it does most everything it’s supposed to well, which might be enough to make you forget about its cost and sleepy styling.