Competition is good. It forces you to get better, to stay innovative, and potentially change your approach in order to snag the market share you believe you deserve. In the world of drones, competition for the market leader DJI seems to be nonexistent.

Remember 3D Robotics? It has exited the consumer drone space. Lily Robotics, which had the most exciting Kickstarter project in years? It’s been killed and resurrected with nearly none of the original autonomous features present. Even GoPro’s Karma program, an initiative that was dubbed a savior for the already turbulent company, is dead.

Parrot, a company mostly known for drones tailored to kids or beginner pilots, on the other hand, is still around. The new $699.99 Anafi is the company’s direct answer to DJI’s recent Mavic Air, and is a compact, capable drone that promises to capture stunning aerial footage in 4K. It also introduces a few features you can’t find on other drones today.

But is it enough to knock DJI out of the sky?

Our review of Parrot Anafi 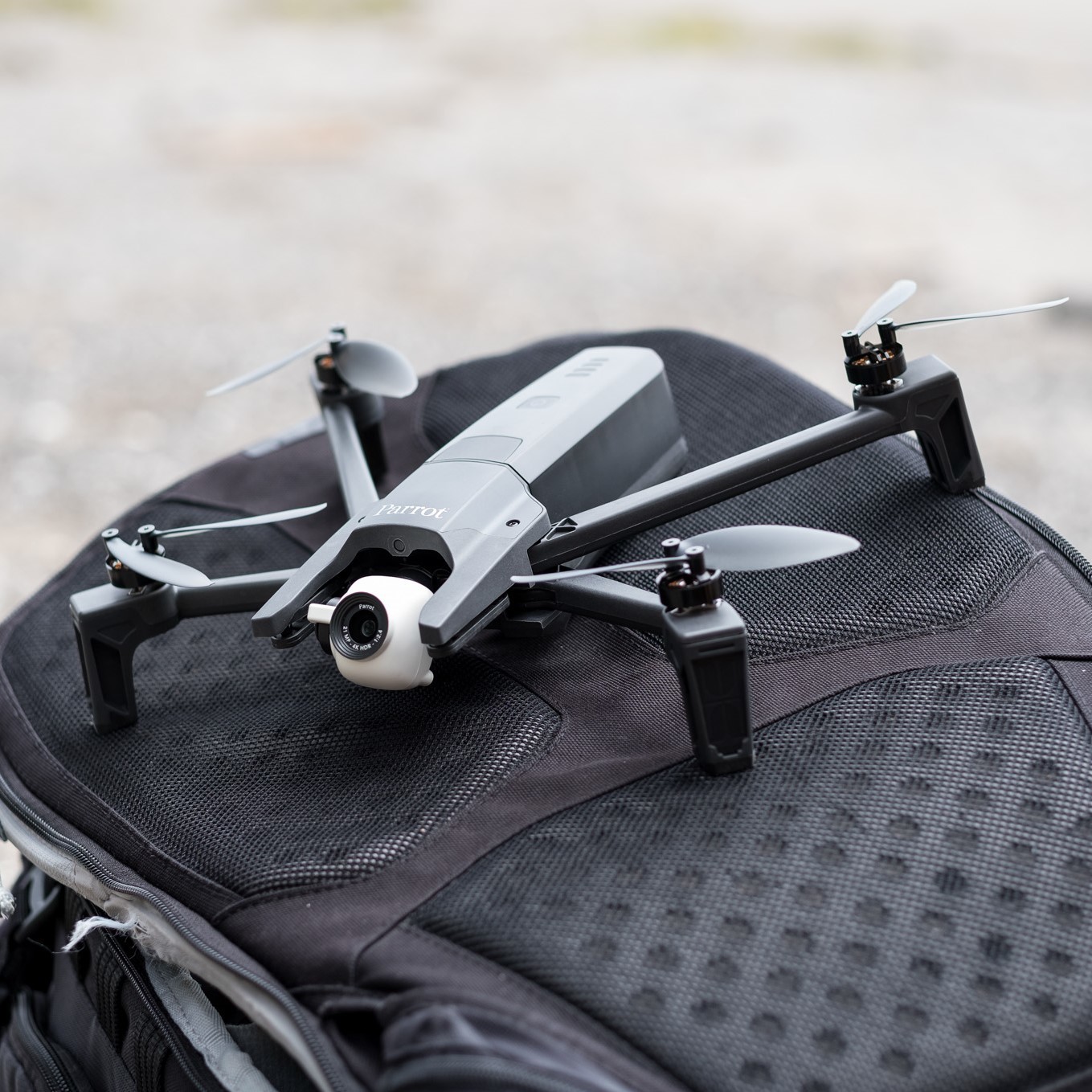 I’ve been testing out Anafi for the past two weeks, and have logged around 30 flights in that span. There are a lot of things I like about it, including zoom capabilities and the ability to capture HDR footage that you won’t find in other drones. But all of those positives are overshadowed with how miserable the overall experience was.

My initial experience with the Anafi was marred by a variety of problems, mostly around buggy software, poor connectivity, and even corrupted files. Parrot was able to send out another device, and my experience did improve with it. But even with a unit that was working as Parrot designed it to, the Anafi lacks the refinement and finesse you get with DJI’s Mavic Air. It’s not as portable as you’d want it to be and overall ease of use isn’t quite there.

The most important feature of any drone designed for videographers is the image quality. This is where Anafi shines. Its 4K 100 Mbps bitrate footage looks great and is just as good as the footage from the Mavic Air. I even prefer its flat image profile better than what I get on the DJI for color correction while post processing.

The Anafi’s HDR capability one-ups the DJI, but the execution isn’t very good

Unlike the Mavic Air, however, Anafi has a built-in HDR video option. Ability to shoot HDR is one of the standout features that you can’t find on any other drone in this price range. HDR promises to provide a better image by balancing the exposure between bright and dark areas better, something that is a challenge when shooting a skyline or horizon with a drone.

Sadly, the Anafi struggles with the execution on its flagship HDR feature. When flying, it’s not entirely clear when the HDR option is available or even when it’s turned on, which quickly becomes a frustrating experience. The difference between non-HDR and HDR footage is very evident, as the HDR footage captures a lot more detail, especially in the sky, which usually gets blown out. But at the same time, it looks overly saturated and unnatural. Additionally, it just had too much noise and moire in areas with a lot of details like rooftops or trees.

During the time I have been testing this drone, Parrot issued many software updates which have made my experience progressively better. The improvements were most noticeable in the still image quality from the Anafi’s 21-megapixel camera. The first few photos I took had very harsh distortion as if shot with a fisheye lens. That has been fixed with the latest software updates, and photos do look great now. The high-resolution images have a lot of detail and very little chromatic aberration. It can shoot both DNG and JPEG, but for some reason, you can’t use the zoom options here. Hopefully that gets added with another software update.

The Anafi’s second standout feature is its ability to tilt the camera upwards towards the sky. It’s neat and opens up a world of possibilities for capturing unique angles, such as when flying under a bridge or some other structure. It takes some effort to find interesting ways to use this footage, but I look at it as just another tool in my creative kit that I can use when I need to.

The Anafi’s ability to zoom in without losing image quality is it’s third standout feature. While filming in 4K, you can zoom up to 1.4x and if you’re filming in 1080p it goes up to 2.8x without losing detail. Even though I can do similar things in post processing by shooting in 4K and scaling down to 1080p, I really enjoy having zoom options while flying. Similar to how GoPro footage is instantly recognizable the second you see it, drone footage is becoming very repetitive. Being able to change that, without having to buy high-end professional production drones with interchangeable lenses, is a welcoming change. We already reached a point where smartphones have multiple built-in lenses, I don’t see why we can’t have that with drones soon.

While the Anafi does have several useful features, it misses in other key areas. It lacks many automated filming options you get with DJI drones. The one automated “Follow me” feature (which costs an extra $17.99 in-app purchase to enable) simply didn’t work in my tests. It’s inexcusable that one of the most common features you find in most drones today costs extra and then doesn’t even work that well. The Anafi also lacks obstacle avoidance sensors, which decreases chances of me ever using the Follow me feature, even if I could get it to work.

Like the Mavic Air, the Anafi is foldable. When unfolded and ready to fly, the two drones are very similar in size. But when packed up for travel, the DJI is noticeably more compact.

I initially wasn’t fond of how the Mavic Air folds. It’s confusing how the back legs fold downwards and into the body, but looking at Parrot’s approach with the Anafi, DJI’s convoluted folding legs make a little bit more sense. The Anafi, when folded, is a lot longer than the Mavic Air. It’s basically as big as a telephoto lens for a DSLR when it’s stored in the included carrying case. Also, it’s worth noting that the drone just feels cheap and more fragile than the Mavic Air. It is lighter than the Mavic Air, which help with battery life, but also makes it harder to fly in windy conditions.

There are other issues I found worrisome. The drone kept drifting when left in hover mode. Some files were never recorded. Changing settings in the app weren’t applied. The already mentioned HDR mode, which only works in 4k, either isn’t present or just wasn’t working and I couldn’t tell why or when. Almost every flight I took with this drone had some new or reoccurring issues which would require me to land the drone and change the battery or restart the app and the remote.

The issues don’t end there, either. The SD card slot is placed under the battery in a lockable tray that reminds of old SIM trays in Nokia phones. There isn’t any internal storage, so forgetting an SD card, which happens more than any of us want to admit, isn’t as simple as just inserting one. Parrot does include a 16GB card in lieu of the internal storage. Frustratingly, there is no way to check the battery level when the battery is plugged in.

The Anafi’s remote control is massive. It feels sturdy and fits well in your hands, but be prepared for it to take up a lot of space in your bag. Ever since DJI introduced removable joysticks, it’s hard to get used to anything else. The phone holder also doubles as an antenna and despite a few bad connections I initially had, the Wi-Fi connection otherwise was very stable throughout. The connectivity problems that plagued Parrot’s older Bebop 2 drone seem to be resolved here.

A lot of the issues mentioned could potentially be fixed with software updates, but the unfinished feel made me feel insecure about where and how I can fly this drone. Every time I switched back to Mavic Air there was some sense of security which made drone piloting feel like a relaxing and fun activity. The Anafi lacks that confidence.

However the most alarming problem I had was when I tried putting my hand underneath the drone to test its proximity sensor. The drone lost control and went flying uncontrollably in circles until it finally crashed into a tree. Fortunately, there was no visible damage to the drone, likely thanks to the light carbon with glass fiber materials it’s made of. I have a feeling if this had happened to the Mavic Air, there would be a lot more damage and a few broken props. But the DJI likely wouldn’t have crashed like that.

Battery life, however, is a bright spot for the Anafi. I really enjoyed the extra 4-5 minutes I got out of it compared to the Mavic Air. In my Mavic Air review, I mentioned the advertised 21 minutes of flight time just felt too short. The Anafi’s 25 minute mark really is a sweet spot for drones meant for travelers and people on the go. Even the fact that both battery and the remote can be charged through USB-C means you can easily charge it in your car or with an external battery pack. That definitely saved my ass a few times when shooting in Northern California.

Overall, Parrot has made the best competitor to a mainstream DJI drone in years. But just showing up isn’t enough, to really matter, the Anafi had to be better than the DJI Mavic Air, and unfortunately, it’s far from that.

This drone is close to being good, but I had too many issues that outweigh its potential. In addition to the buggy software, the experience I had just wasn’t as fun or rewarding as what you get with the Mavic Air.

Correction, 1:00PM, July 2nd, 2018: An earlier version of this review said that 3D Robotics no longer existed. The company still exists, but it no longer makes consumer drones. We’ve updated the article and regret the error.